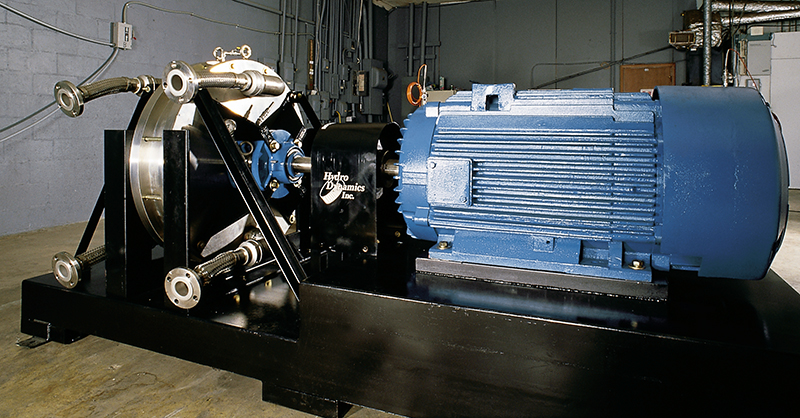 NASA engineers are well known for their skills overcoming obstacles encountered when designing space missions; but they are also able to provide solutions for more down-to-earth problems. Just ask Hydro Dynamics, Inc., of Rome, Georgia, which benefited from the helping hand Marshall Space Flight Center was able to provide.

Hydro Dynamics' patented device, the Hydrosonic Pump,™ (HPump) kept running into problems with the bearings needed to operate a rotor inside the device. In search of an answer for how to fix the problem and make the device marketable, Hydro Dynamics turned to Marshall. Through a Technology Transfer Agreement, Marshall scientists and engineers were able to examine and analyze the problem and provide some solutions for the company.

Tests conducted at Hydro Dynamics indicated that the rotor generated high temperatures when the pump was operating. The bearings being used were not capable of handling the high temperatures. NASA recommended changing to bearings, housings, and mounting hardware that could withstand the stress placed on them by the high level of heat generated.

Thanks to Marshall's engineering solutions, Hydro Dynamics was able to introduce the HPump to the market. The HPump is designed to heat liquids in a more energy efficient manner. The patented technology converts mechanical energy to heat energy with a high efficiency rate.

The secret to the HPump's success, according to the inventor, is the use of shock waves to produce the heat, rather than electric heating elements or fossil fuels. The shock wave effect is commonly referred to as a "water hammer" and is usually considered a problem that needs to be removed. Hydro Dynamics founder Jim Griggs began his research into harnessing the benefits of the "water hammer" in 1985 and founded Hydro Dynamics five years later.

The rotor inside the HPump produces shock waves, which in turn generate millions of microscopic bubbles inside the liquid. As the bubbles collapse, heat is released creating a heating "inside the liquid" effect rather than from an outside surface. Conventional technologies transfer heat into liquids using high temperature metal surfaces or flames. This causes large temperature differences between the heat source and the liquid, forcing impurities to build up on the hotter surface of the heat source. This impurity build up is called "scale" which can degrade the heating efficiency. Now, after years of development and some NASA assistance with the bearing problem, Hydro Dynamics is providing savings to industries in need of a non-scaling heating device.

The advantages of the technology used in the HPump can be applied to many industries. There are current uses for it in pulp and paper, petroleum, chemical heating, and environmental cleanup industries. Hydro Dynamics also sees future applications in developing combustionless heating through the use of wind power.

Hydrosonic™ Pump is a trademark of Hydro Dynamics, Inc.

Abstract
Hydro Dynamics, Inc. received a technical helping hand from NASA that made their Hydrosonic Pump (HPump) a reality. Marshall engineers resolved a bearing problem in the rotor of the pump and recommended new bearings, housings and mounting hardware as a solution. The resulting HPump is able to heat liquids with greater energy efficiency using shock waves to generate heat. 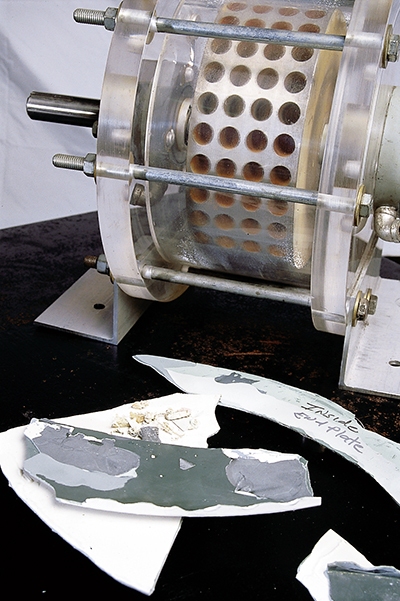 NASA engineers solved a design problem with Hydro Dynamics' rotor for use in the Hydrosonic Pump.™ The holes in the rotor produce microscopic bubbles, preventing the buildup of impurities (scale).

The rotor inside the Hydrosonic Pump™ generates shock waves to provide the energy needed to heat various liquids, such as organic salt used by the petroleum industry.