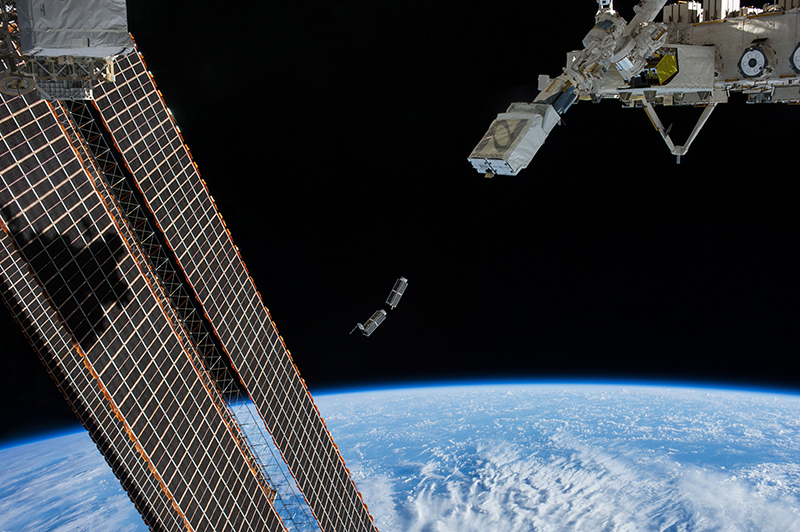 A burst water main is always expensive and messy, but a pipe that fails in space can be mission-ending. That’s why NASA technologists work hard to make hardware as reliable as possible. Sometimes that means scrapping the old way of doing things and experimenting with a brand-new material – or fabrication process.

This challenge spurred Scott Roberts, a technologist at NASA’s Jet Propulsion Laboratory in Southern California, to turn to a new kind of welding in the 3D-printing industry. The private sector was already using this technique, called ultrasonic additive manufacturing (UAM). With some additional innovation, Roberts thought it could be used to improve reliability in heat exchangers, a crucial component of any spacecraft. Improvements one company made to its UAM process to help Roberts build better spacecraft are now beginning to pay off in industries from aeronautics to oil drilling.

“The problems I’m working on don’t solve one problem for one mission,” said Roberts. “They’re going to solve a class of problems for both NASA and industry.”

What does 3D printing have to do with pipes?

Temperature is a particularly difficult problem in space, where extremes can vary by hundreds of degrees. Heat exchangers help maintain a steady temperature inside a spacecraft by removing excess heat or drawing in more. Traditionally, these devices include a long, snaking pipe attached to a metal plate with brackets and epoxy. Although effective, they consist of many interconnected parts, introducing many potential points of failure.

With ultrasonic additive manufacturing, however, the entire device can be crafted as a single piece. Small Business Innovation Research (SBIR) funding provided by JPL made it possible for Roberts to work with Columbus, Ohio-based Fabrisonic LLC on a new heat exchanger design. As a subcontractor for Sheridan Solutions LLC, Fabrisonic started with an existing process that builds up multiple thin layers of metal by fusing them together with high-frequency vibrations. To create the heat exchanger, a curved channel is carved into the layered metal and then enclosed under additional layers.

The new design replaces dozens of small parts and joints that could fail during a long-term mission or under extreme conditions on Earth.

How can vibrations fuse metal?

Ultrasonic welding uses sound and friction to create a solid-state bond between layers of metal. It begins with a thin foil pressed onto another metal component such as a base plate. Constant pressure and ultrasonic vibrations cause friction between the facing sides, creating a shearing motion that raises temperatures and removes surface oxides, allowing direct contact of pure metal to pure metal. The result is a solid-state atomic bond that welds layers of metal together. Even layers of different metal can be bonded into a single piece.

Relatively little heat is required because the bonding temperature for metals is significantly below melting temperature. Fabrisonic can quickly piece together layers as large as six feet square, making it possible to create a part with a complex geometry in a matter of days, rather than the months required by traditional fabrication practices. This shortens the development cycle for a spacecraft or speeds the manufacture of commercial parts.

Protecting electronic components from intense space radiation that can destroy them is challenging when everything on a spacecraft needs to be lightweight. It’s one problem Roberts is trying to solve using novel materials. Additional SBIR funding provided by NASA’s Langley Research Center in Hampton, Virginia, paid for Fabrisonic to add layers of the radiation-resistant metal tantalum in the middle of aluminum spacecraft parts.

Unlike other forms of welding, UAM won’t cause the different metals to liquefy and mix together. Engineers can rely on the properties of each metal to remain constant and perform as expected, said Mark Norfolk, president of Fabrisonic. This quality demonstrated that NASA could realize its goal of combining the aluminum with tantalum.

The ability to meld layers of different metals also has advantages for customers in the oil and gas industry, who now rely on various Fabrisonic parts for drilling, Norfolk noted. One is a well drill pipe – a hollow, thin-walled tubing that combines dissimilar materials and uses embedded sensors.

Why put sensors inside metal?

New fiber optic sensors can detect metal strain or weaknesses and predict possible failures before they occur. But metal manufactured using traditional methods can only support these sensors on the exterior of the part. In an attempt to embed them, the heat used in the manufacturing process would destroy the delicate devices.

Other SBIR funding from Langley helped Fabrisonic, again as a Sheridan subcontractor, test the effectiveness of sensors built into the interior of aluminum parts with ultrasonic welding. After some trial and error to find the best sensors for such an innovative application, engineers were able to obtain accurate, real-time data about the health and performance of the metal. Because the sensors are protected, they can function in harsh environments. The Oak Ridge National Laboratory, which conducts energy and nuclear research, is successfully using Fabrisonic’s embedded sensors in its facilities. In NASA aeronautics testing, these Fabrisonic sensors help detect weaknesses and performance issues in commercial airframes.

What if I want to print small parts myself?

NASA’s Marshall Space Flight Center in Huntsville, Alabama, meanwhile, funded Fabrisonic’s exploration of the use of advanced metallic materials and UAM for in-space manufacturing, this time as a subcontractor on Phase I and II SBIR contracts with a machine automation company called Ultra Tech Machinery Inc. The agency’s engineers worked with Fabrisonic to develop a small UAM printer for use on the space station. The company had a design ready but didn’t know if it would work. NASA specifications made it possible to build, test, and refine the most important component of the printer – the weld head. This part transfers the ultrasonic vibration onto the metal tape used in the printer.

Miniaturizing this technology for fabricating smaller parts offers a more cost-effective approach than using an industrial UAM process. Commercial sales of the company’s resulting SonicLayer 1200 printer have generated $1 million in revenue, with one customer producing over 70,000 parts in-house.

Commercial success has allowed the company to develop a diverse customer base and double in size, growing to 12 employees.

“Without SBIR and other government support, Fabrisonic may not have crossed the chasm between start-up and commercial success,” said Norfolk. “It has enabled important research and developments. It makes critical information available, such as materials characterization data and case studies that help spread technology.”

Abstract
Fabrisonic LLC used NASA SBIR funding for materials development to refine ultrasonic welding practices that provide the agency and commercial industry with lightweight parts that can be made with disparate metals and embedded sensors. 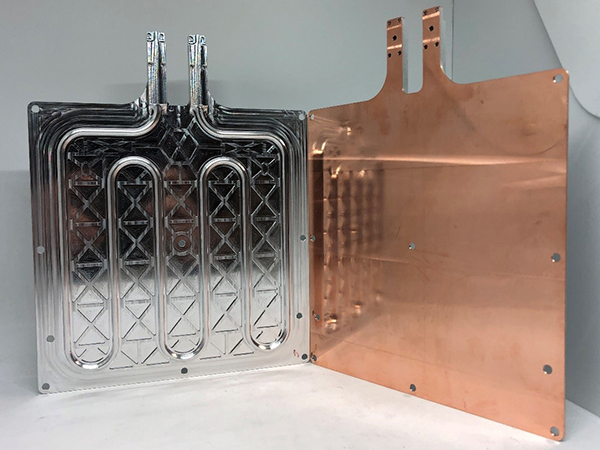 This 3D-printed radiator for a CubeSat combines aluminum and a small bit of copper to allow heat to spread more evenly across the face. Fabrisonic was able to combine the metals using additive manufacturing techniques that employ ultrasonic welding. Credit: Fabrisonic LLC 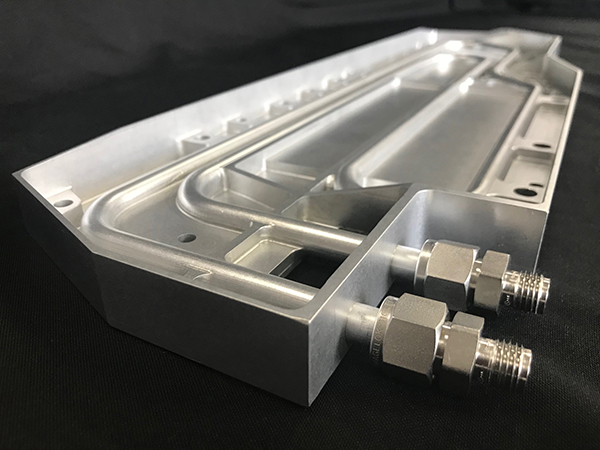 Ultrasonic welding techniques eliminated the need for thermal interfaces and hardware in this aluminum heat exchanger Fabrisonic made for the Jet Proulsion Laboratory. As a result, the heat exchanger weighs almost 30% less and performs 30% better than parts made through traditional methods. Credit: Fabrisonic LLC 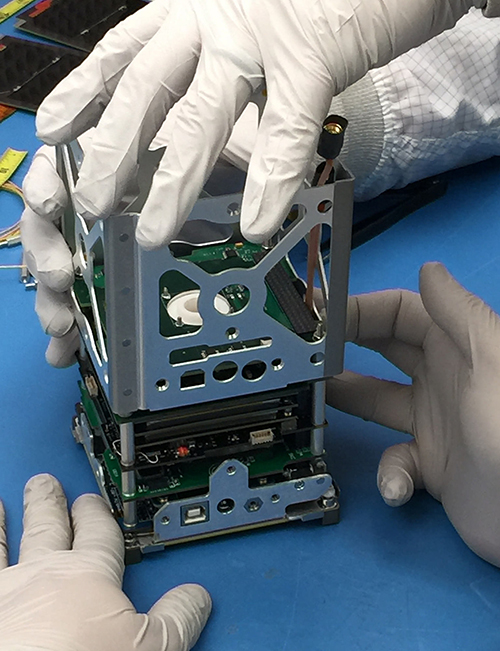 CubeSats (see above and below) can be used for a variety of tasks, from Earth observation to flying science experiments, but their small size makes it a challenge to fit all the parts as well as the shielding needed to manage the extreme temperatures of space. NASA is interested in new manufacturing techniques that enable more efficient use of materials. Credits: NASA