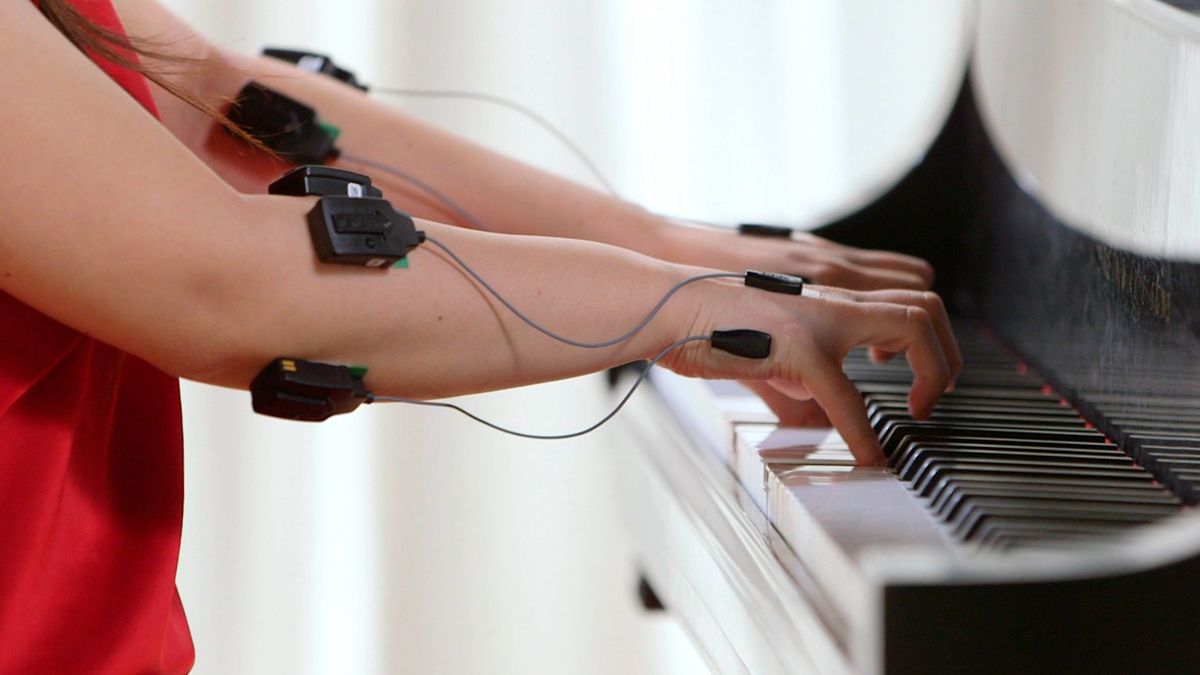 NASA asks hard questions: What’s it like on the Moon? Has there been life on Mars? How did the first stars form? Finding these big answers often means first solving a series of smaller but equally vexing questions.

For example, how does prolonged weightlessness change the way the brain controls muscles? How does the brain control muscles? Before sending humans on the long journey to Mars, NASA wants to better understand the effects the trip will have on astronauts. Now a company that helped the space agency try to solve these questions is helping others find answers as exciting as any NASA discovery.

Researchers using systems created by Delsys Inc. of Natick, Massachusetts, are now working to help paralyzed people walk again, to let amputees control prosthetic limbs like any normal body part, and to allow laryngectomy patients to speak. Such projects are only conceivable, however, because of decades of research and development, jump-started by several early NASA partnerships.

Delsys was founded in 1993 by Carlo De Luca, founding director of Boston University’s Neuromuscular Research Center (NMRC), to begin commercializing technology the center was developing. At the heart of the NMRC’s mission to improve understanding of motor control was advanced electromyographic (EMG) technology, which senses and analyzes the electrical signals emitted when motor nerves carrying signals from the brain and spinal cord stimulate muscles.

De Luca and his team had already been pioneering early-stage EMG technology prior to opening the NMRC in 1984, and the new center’s work quickly drew NASA’s interest.

In the late 1980s and 1990s the agency’s Johnson Space Center in Houston helped fund studies in which the NMRC and then Delsys tested muscle fatigue resulting from the use of different spacesuit glove designs, as well as astronauts’ balance and neuromuscular adaptability before and after space shuttle flights. By 2000, two Small Business Innovation Research (SBIR) contracts from Johnson helped Delsys complete its first commercial EMG system, called the MyoMonitor.

Testing on astronauts provided a valuable opportunity for the team to study neuromuscular adaptation to the absence of gravity, said Serge Roy, who worked with De Luca since the late 1970s and is now director of research at Delsys and its research arm, Altec Inc. Previously, the team had tried to simulate weightlessness in laboratory rats. But the NASA work also raised new questions, he said: “The amount of weakness you see after two weeks of spaceflight can’t be fully accounted for by the degree of atrophy in the muscle.”

So the early 2000s brought another round of technology development and space shuttle studies to examine the functioning of astronauts’ individual motor nerves. “That triggered a larger evolution of technology, which has been a mainstay of our research and our product line ever since,” said Gianluca De Luca, Carlo’s second cousin, who became president of Delsys following the elder De Luca’s death in 2016.

To pick up individual motor nerve signals, the team had to insert needles with electronic sensors into astronauts’ hands and legs. But Delsys wanted to improve its technology to allow this level of precision from sensors attached to the skin, and to make those sensors wireless. These two major challenges were overcome with the help of two more SBIR contracts from Johnson.

Gianluca De Luca compared picking out individual nerve signals from the surface of the skin to mapping raindrops falling on a pond during a downpour, based on their ripples. “If I were to ask you to identify the individual raindrops that led to that pattern of ripples, you wouldn’t be able to do it.” With the SBIR funding, the company designed sensors and algorithms capable of pinpointing each of those signals, although processing the data from a single test still took days. As computing power advanced, however, Delsys created software that now can analyze that firehose of data in real time.

Making the sensors wireless was no less daunting, with the biggest challenge being to perfectly synchronize signals from multiple sensors placed across the body. This is essential for seeing how muscles work together to coordinate complex movement. Because wireless protocols like Bluetooth can have several milliseconds of lag time, the company developed its own wireless language for the sensors to transmit the exact timing of each nerve firing.

Most customers for Delsys’ systems, sensors, and software are still research laboratories at universities, medical device companies, and other scientific institutions, developing cutting-edge technologies. Many are engaged in projects that would once have been thought impossible.

De Luca said several are working on regenerating damaged nerves to reverse paralysis, including at least one company that has restored movement to paralyzed monkeys in the lab. While motor nerves can sometimes regenerate with the help of electrical stimulation together with new therapies that are in development, it’s hard to know what paths those nerves are taking. This is where Delsys systems can help researchers track progress by detecting the location and the degree of nerve and muscle activity.

Another project the company is working on with universities and the National Institutes of Health is an attempt to let amputees control a prosthetic limb much like a natural body part. While other robotic prosthetics have communicated with surgically implanted electrodes, this new, less expensive and non-invasive approach would interpret the firing of EMG signals directly from a limb’s remaining muscles without the risks of surgery.

Delsys is also working with several partners to develop technology that would let patients speak after having their larynx, or voice box, removed. The idea is to first use the EMG technology to record the muscle and nerve signals from the face and neck during speech. Then a program could translate those motor signals back into speech. “So we’ve done this elaborate analysis and have come up with a speech prosthetic that’s under development,” said Roy. “It’s a cutting-edge use of EMG technology that has some pretty fascinating practical applications.”

Companies making athletic gear have also become customers, De Luca said. “For example, all the major running shoe manufacturers own our equipment, because when they design a shoe, they want to understand how its design affects the human body and its movements.”

As the company has made some of its devices simpler and easier to use, Delsys also has begun to find customers outside of research laboratories. These include individual neurosurgeons, physical therapists, athletic trainers, and others who are interested in analyzing movement or neuromuscular disorders.

While it’s been over 15 years since Delsys last worked with NASA, De Luca said the company, now a global operation, continues to benefit from the team’s long relationship with the space agency, which laid the groundwork for its flagship products. “A lot of our early developments were seeded by the larger research questions that had their inception with the NASA-focused studies.” 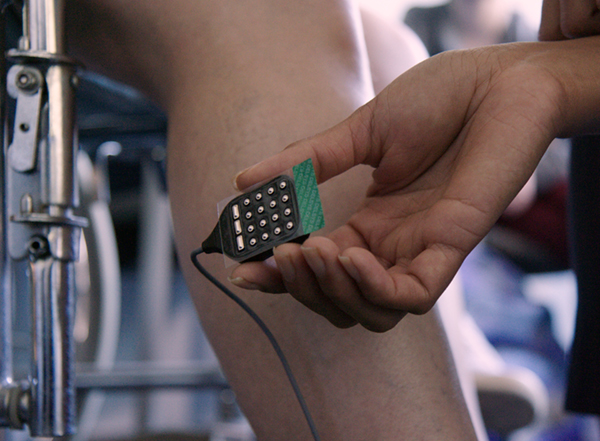 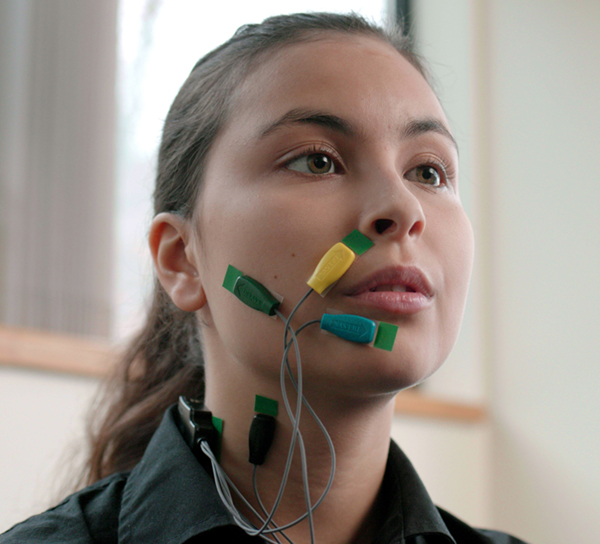 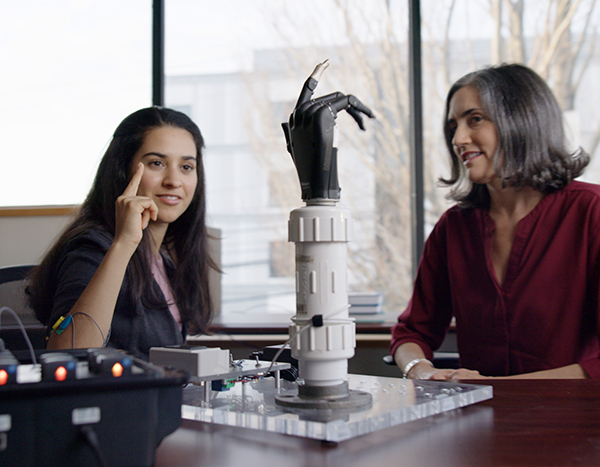 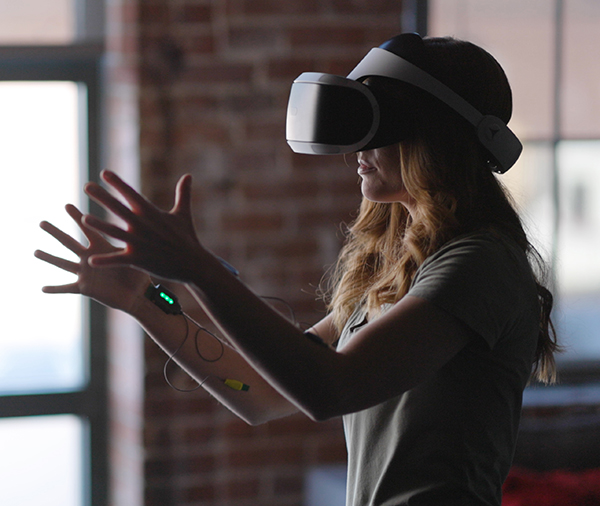 Delsys and its customers are working to fuse EMG signals and movement information from arms and hands with virtual or augmented reality experiences for telehealth applications. Credit: Delsys Inc. 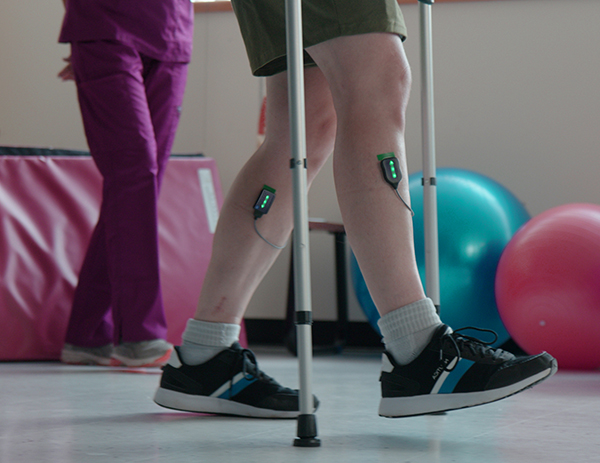