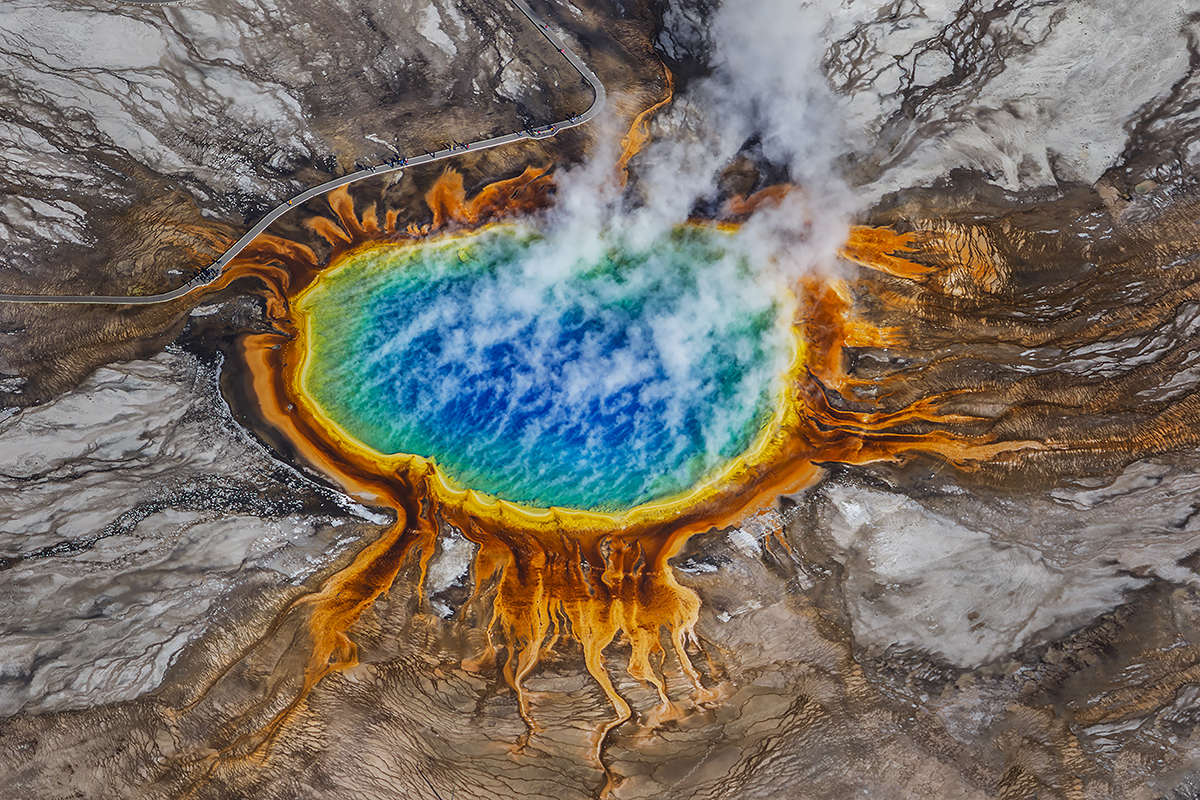 First, a particular type of microbe evolved in an acidic hot spring. Fast-forward millions of years, when a geomicrobiologist finds this type of microbe in Yellowstone National Park while conducting NASA-funded research on organisms that thrive under extreme conditions.

Now you can buy a protein grown from the organism in grocery stores in the form of vegan breakfast patties and cream cheese. It’s also growing in space, where astronauts are studying it as a possible protein source for long-duration missions. And it’s informing a project to introduce sustainable fungal proteins to low- and moderate-income communities around the world.

Mark Kozubal, the researcher who collected and named Fusarium strain flavolapis, went on to co-found Nature’s Fynd, a Chicago-based company that produces the fungal protein in an area of the city once known for meat processing.

The company has since raised more than half a billion dollars from investors.

Producing this complete protein, which Nature’s Fynd has trademarked as Fy, requires far less water and land than beef, according to the company.

“We have this big, complex problem about how we feed everybody, and some of the answers are out there and we just need to use science to figure it out,” said Nature’s Fynd CEO and other co-founder, Thomas Jonas.

“That’s really what we decided to go after,” he said, “so we progressively increased the efficiency of the technology, we enabled better transformation and better yield of protein, and that’s what got us here.”

If life exists on other planets or moons, it’s not likely to look like life on Earth.

Mars, for example, may have hosted life in the past, but anything living there today would have to survive conditions that are considerably drier, colder, and saltier than our environment. NASA also wants to look for life on Jupiter’s moon Europa, where it would need to exist deep under ice.

“In order to understand what life is capable of doing, we look to extreme environments to see what adaptations life has evolved,” said Lindsay Hays, deputy program scientist in NASA’s astrobiology program, explaining the agency’s support of research in places like Yellowstone National Park.

“Yellowstone is a truly unique place,” she said, describing a deep volcanic environment percolating through ancient and modern cracks and seeps.

“Hot springs in the park have some of the wildest ranges of temperature and pH and other types of conditions,” she said. “If you want to understand different adaptations that life has, go look in these hot springs.”

That is just what Kozubal did. NASA was funding his work on extremophiles – organisms that thrive in extreme environments – through Montana State University when he isolated Fusarium strain flavolapis.

He and his team initially looked at the microbe as a possible source of biofuel.

They soon discovered that under certain conditions and with the addition of nitrogen, Fusarium strain flavolapis grows into a complete protein, with all the essential amino acids and a chicken-like texture.

Further experimentation revealed the versatility of the Fy protein. It can be ground into convincing breakfast patties, whipped into cream cheese, or molded into any number food applications, more than a handful of which are under development at Nature’s Fynd.

Fy is produced through a proprietary fermentation process that leverages Fusarium strain flavolapis’ preference for extreme conditions. The microbe grows in an acidic liquid that is inhospitable to bacteria and other organisms that might contaminate it, rendering pesticides and antibiotics unnecessary.

To develop a bioreactor to grow the protein in space as a food source for astronauts heading to the Moon or Mars, Nature’s Fynd, in partnership with Montana State University, received Phase I and Phase II Small Business Technology Transfer contracts from NASA’s Ames Research Center in Silicon Valley, California.

In July, the bioreactor and starter microbe went to the International Space Station with help from a grant from NASA’s Established Program to Stimulate Competitive Research awarded to Nature’s Fynd and BioServe Space Technologies, a research center out of the University of Colorado.

Leveraging some of the same technology that’s currently in space, Nature’s Fynd is working to install bioreactors in under-resourced communities in Africa and Asia to generate quality proteins from additional fungal species, with help from a grant from the Bill and Melinda Gates Foundation.

“We feel incredibly excited about what we’ve done with NASA, the partnerships, the opportunity to contribute even just at our level on these bigger questions,” Jonas said. “We deeply love this curiosity about what could be out there.”

Abstract
A microbe found in Yellowstone National Park during NASA-funded research is now the basis of a fungal protein from which Chicago-based Nature’s Fynd produces meat-alternative breakfast patties and non-dairy cream cheese. The protein is also growing on the International Space Station as potential astronaut food, and the company believes it could one day help ensure sustainable nutrition globally. 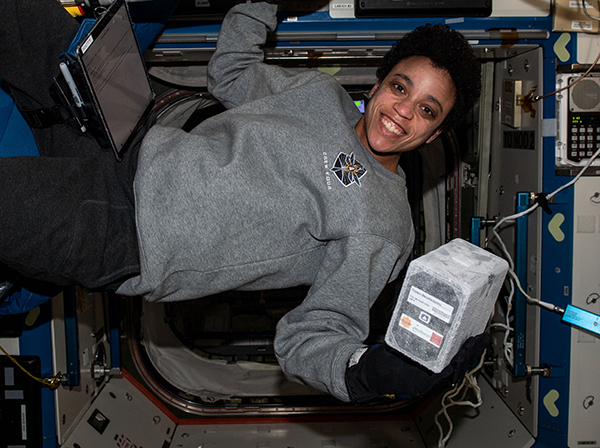 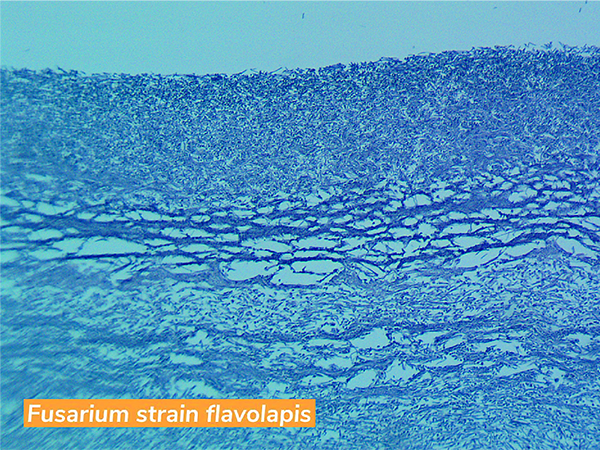 Found in an acidic hot spring, the microbe at the heart of Nature’s Fynd’s meatless protein prefers a low-pH environment that repels most common bacteria and insects, so pesticides are unnecessary in the fermentation process. Credit: Nature’s Fynd 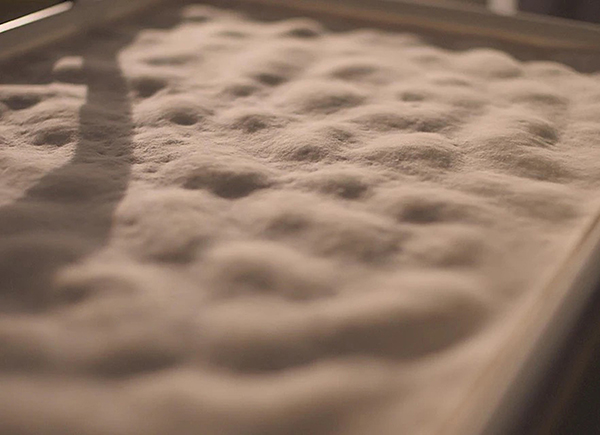 Nature’s Fynd grows its trademarked meat alternative Fy in trays through a specialized fermentation process. The result is a complete protein with a texture something like chicken. Credit: Nature’s Fynd 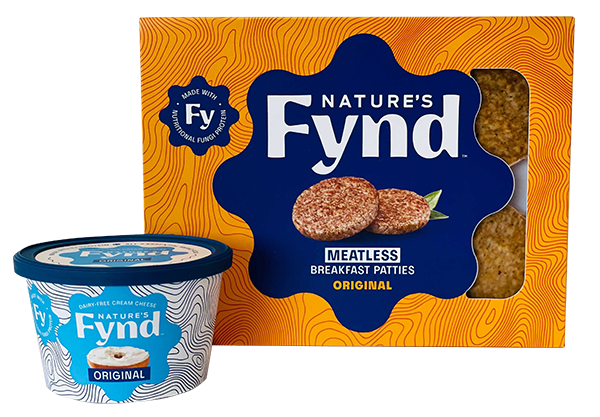 The company’s meat-alternative breakfast patties and dairy-free “cream cheese” are available in restaurants and grocery stores in some regions. Nature’s Fynd is working to expand its presence around the country. Credit: Nature’s Fynd

Hot springs like those in Yellowstone National Park are heated either by shallow bodies of magma or by circulation through faults to hot rocks deep in Earth’s crust. Microorganisms like the one in Nature’s Fynd’s protein have adapted to these extreme environments, where dissolved minerals act as a food source. Credit: Getty Images