A Natural Way to Stay Sweet

A revolutionary, low-calorie sugar is now available to the food and beverage market, offering an all-natural alternative to table sugar and artificial sweeteners. Tagatose, a sugar that appears in nature in small quantities, began its unusual journey to the commercial market nearly 30 years ago, when Dr. Gilbert V. Levin invented a life detection experiment to place aboard NASA’s Mars Viking 1 and Viking 2 landers. The experiment involved using radiation-laced nutrients to determine the presence of microbial life in Martian soil samples.

The experiment was one of the earliest projects for Biospherics Inc., the company Levin founded in 1967. NASA’s planetary science program provided research and development support to the company, selecting Levin’s experiment for its Viking missions in 1969. After the Viking 1 lander touched down on Mars to gather data, it would place Martian soil into a container with the radiation-laced nutrients. If microbes were present, they would eat the nutrients and release radioactive carbon dioxide, which is detectable by a Geiger counter.

In selecting the nutrients for the experiment, Levin first examined the conventional form of glucose, because every living organism on Earth eats this type of sugar. Levin then considered the principle that some complex molecules exist in “right-handed” and “left-handed” forms, known as enantiomers. In sugars, these forms are referred to as D and L, from the Latin dexter and laevus, and they only differ in the arrangement of their elements. While two enantiomers of a sugar molecule will respond identically in a chemical reaction, they will not have the same reaction in biological systems. Earth’s microbes only eat and metabolize D-glucose. Since digestion could differ for the possible Martian microbes, Levin prepared both D-glucose and L-glucose for his experiment’s nutrients, so that any possible life on the Red Planet was not missed. When technical problems prevented the use of glucose, he substituted another sugar, lactose, using both its D and L forms.

The results of Levin’s experiment came back positive for the radioactive carbon dioxide. While the parameters of the experiment suggested life had been discovered on Mars, two other life detection experiments came up negative. A test for organic material, the precursor to all life, also was negative, leading NASA’s scientists to conclude that Levin’s test had been fooled by oxidants in the soil.

While the Viking experiment was not generally acceptd as proof of life on Mars, Levin’s exploration of the two different forms of sugar led him to realize that if the human stomach does not digest L-glucose, the sugar might be able to serve as a low-calorie sweetener. The main question was whether or not a left-handed sugar would taste as sweet as the right-handed sugar people consume. Levin established a taste panel at his Beltsville, Maryland-based company, which he renamed Spherix Incorporated . No one was able to tell the difference between the L and D versions of the sugar. He then patented the use of L- sugars as low-calorie sweeteners.

While L-glucose was an excellent candidate to be a low-calorie sweetener, Levin found that his company could not make it cheaply enough for commercial use. He continued to explore and patent other left-handed sugars for use in foods, such as L-fructose and L-gulose, but Spherix continued to find them too expensive to be viable. Levin then examined D-tagatose, which closely resembles L-fructose. The right-handed tagatose is similar enough to a left-handed sugar to cause the human stomach to digest only a small percentage of it, making it low in calories. More importantly, Spherix developed an inexpensive method to make tagatose, and patented the method in 1988.

Tagatose quickly proved its advantages as an alternative for regular sugar. Since it is 92 percent as sweet at table sugar, it can be used as a one-to-one sugar replacement. This gives tagatose the benefit of having the same bulk as table sugar, making it possible to be used in recipes for baked goods or any other recipe in which the bulk of the sugar is an important ingredient. Other low-calorie sweeteners on the market have high-intensity sweetness, and cannot be used for many recipes, since a tiny pinch achieves the necessary level of sweetness. Tagatose also browns like regular sugar during baking, and does not have an aftertaste like some of the high-intensity sweeteners. In addition to being low in calories, tagatose does not cause cavities or promote tooth decay. It also provides a safe sweetener for diabetics.

Spherix continued to develop tagatose until 1996, when the company exclusively licensed the use of the sweetener in food and beverages to Arla Foods Ingredients. Five years later, the U.S. Food and Drug Administration (FDA) deemed tagatose as “Generally Recognized As Safe,” a status which is required for sales in the United States. This FDA action enabled Arla Foods to move forward with commercialization, as the company began building plants to manufacture the sugar.

In 2003, Arla Foods began successfully selling tagatose to food and beverage manufacturers under the brand name Gaio-Tagatose.® The sugar was introduced into 7-Eleven’s Diet Pepsi Slurpee,® and diet fruit juices to be sold at Wal-Mart and other chains. Several other prominent food product companies are manufacturing their products with it and considering marketing them. These products include chocolate candy, soft and hard confectioneries, cereals, ice cream, frostings, and chewing gum. Tagatose may also be applied to health bars and dietary supplements, creating opportunities in the health food markets. Because the sugar has no impact on blood sugar levels, it is suitable for inclusion in low-carbohydrate diets. An early study commissioned by Arla Foods indicated tagatose’s potential market in foods as valued at over $1 billion per year, depending on its suitability for a wide variety of products. The additional potential uses in diet sodas and health food could expand the market significantly.

While Arla Foods explores the food and beverage market for tagatose, Spherix has launched a sales and marketing campaign for Naturlose,™ the company’s brand name for non-food versions of the sugar. Spherix received its first shipment of Naturlose from Arla Foods in December 2003, enabling the company to pursue commercial sales for toothpastes, mouthwashes, and cosmetics. Naturlose’s natural sugar taste and low calories make it an excellent sweetener to improve the taste of these products and others such as throat lozenges and cough syrup.

Levin recently relinquished his chief executive office position to become Spherix’s executive officer for science. He is leading the effort to prove Naturlose’s medicinal value to drug manufacturers. The company’s animal studies have indicated the sugar’s ability to enhance fertility and treat anemia. Diabetics may particularly benefit from both the food and non-food applications of tagatose. A study funded by Spherix and the State of Maryland, conducted at the University of Maryland School of Medicine, showed that not only is tagatose safe for diabetics, but it also blunts the rise in blood sugar from regular glucose consumption. More importantly, it showed that tagatose could potentially be used to treat Type 2 diabetes, as the benefits for this all-natural sugar continue to get sweeter.

Gaio-Tagatose® is a registered trademark of Arla Foods Ingredients

Slurpee® is a registered trademark of 7-Eleven, Inc.

Naturlose™ is a trademark of Spherix Incorporated.

Abstract
Tagatose, a sugar that appears in nature in small quantities, offers a low-calorie, all-natural alternative to table sugar and artificial sweeteners. It began its unusual journey to the commercial market when Dr. Gilbert V. Levin invented a life detection experiment to place aboard NASA's Mars Viking 1 and Viking 2 landers. The experiment involved using radiation-laced nutrients to determine the presence of microbial life in Martian soil samples. In selecting the nutrients for the experiment, Levin explored different forms of sugar. His work ultimately led to tagatose, which proved its advantages as an alternative for regular sugar. Tagatose is 92 percent as sweet at table sugar and can be used as a one-to-one sugar replacement, allowing it to be used in recipes for baked goods. Tagatose also browns like regular sugar during baking, and does not have an aftertaste like some high-intensity sweeteners. It does not cause cavities or promote tooth decay, and provides a safe sweetener for diabetics. Arla Foods Ingredients sells tagatose to food and beverage manufacturers under the name Gaio-Tagatose.R Spherix, Inc. has launched Naturlose,T a non-food version of the sugar, to improve the taste of products such as throat lozenges and cough syrup. Gaio-TagatoseR is a registered trademark of Arla Foods Ingredients. NaturloseT is a trademark of Spherix, Inc. 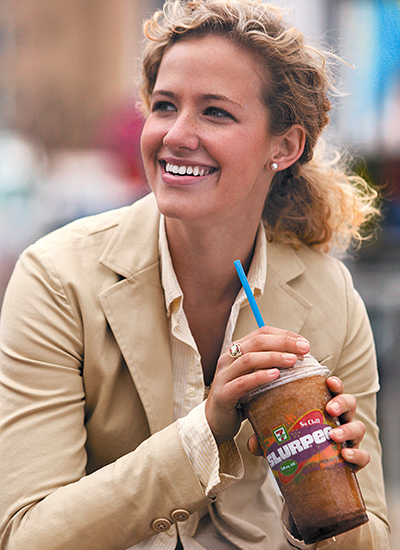 Tagatose, an all-natural alternative to table sugar and artificial sweeteners, has been introduced into 7-Eleven’s Diet Pepsi Slurpee.® 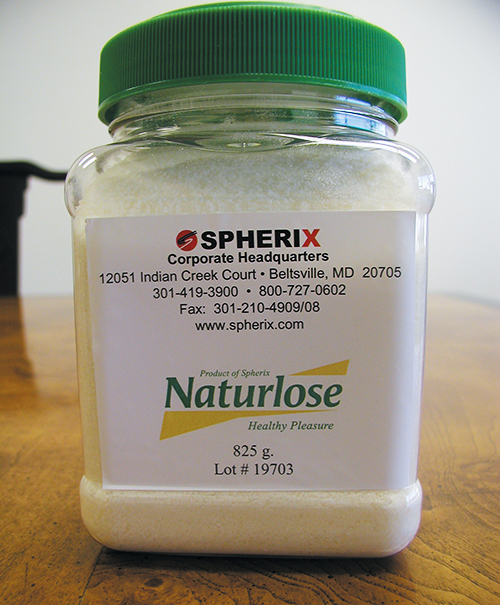 The natural sugar taste of Naturlose™ makes it an excellent sweetener to improve the taste of non-food products such as toothpastes, throat lozenges, and cough syrup.