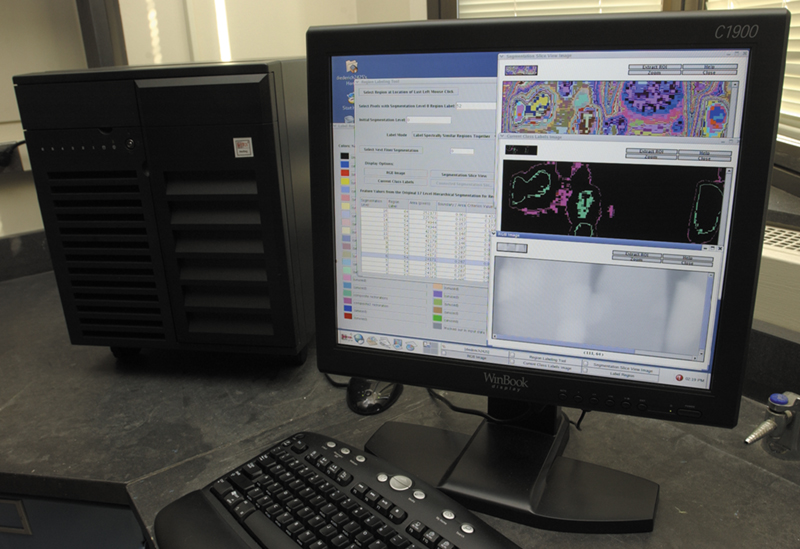 Segmenting Images for a Better Diagnosis

Originally conceived for use in terrestrial remote sensing applications, NASA’s Hierarchical Segmentation (HSEG) software has found its way into a new medical imaging system, allowing for enhanced detection and management of medical conditions and diseases.

HSEG analyzes single band, multispectral, and hyperspectral imagery data with a resolution up to 8,000 by 8,000 pixels. The software evaluates each pixel and then groups pixels with similar imagery data characteristics into regions (pixels that are not adjacent may still belong to the same region if they share a similar spectral value). Similar regions are then combined to form composite regions. For example, an Earth satellite image may contain several lakes separated by land. HSEG will identify each lake as an individual region and then group all of the lake regions together into one composite region. This enables users to manipulate image resolution and therefore focus on data of interest—in this case, the lakes.

The segmentations fully utilize both spectral and spatial information from the imagery data. The result is a more accurate graphical representation of the imagery data with a fine resolution of detail and minimal distortion.

Bartron Medical Imaging, LLC, a small, minority-owned business based in New Haven, Connecticut, is dedicated to the development of imaging systems for medical diagnostic and environmental protection applications. Founded in 2000, the company set out to create a product that could differentiate difficult-to-see details in medical images from a complex matrix background, in order to improve diagnoses. Obtaining appropriate data from intricate images presented a hard challenge to hurdle for Bartron, especially given that none of the systems available at the time were capable of consistently generating such information.

In July 2001, Bartron was invited to NASA’s Medical Imaging Workshop where it attended a presentation on the HSEG technology, given by NASA’s Goddard Space Flight Center. Following the presentation, the company realized that HSEG was the missing piece needed to complete development of the intended new product, since the NASA software could process 16-bit medical image data to reveal information not normally seen by the human eye, let alone other image-interpreting procedures or algorithms.

Bartron contacted Goddard’s Office of Technology Transfer (OTT) with the interest of exploring commercial application of the HSEG software. In response, the OTT facilitated meetings between Bartron and the developer of HSEG, Dr. James Tilton. With guidance from Tilton, the company conducted research to understand the HSEG concept and how to apply it to medical imaging. When it was determined that the software could be integrated into a medical imaging system, Goddard issued Bartron a nonexclusive license for the technology. Goddard also provided Tilton with $150,000 in funding over 2 years to continue assistance in improving the technology’s commercialization potential.

In addition to the Goddard license, Bartron received licenses for other NASA-developed software programs it would need to manage the data for its new imaging system. The California Institute of Technology/Jet Propulsion Laboratory issued two licenses to the company to incorporate pattern-matching software, while Kennedy Space Center issued three licenses for data-mining and edge-detection programs (a technical report issued by Kennedy contends that edges carry the most important information in images, and accurate edge detection is vital to perform advanced image processing and analysis).

Bartron’s Med-Seg™ unit incorporating NASA’s HSEG technology provides improved diagnoses for a wide range of medical images, including computed tomography scans, positron emission tomography scans, magnetic resonance imaging, ultrasound, digitized X-ray, digitized mammography, dental X-ray, soft tissue analysis, and moving object analysis; the technology is also equipped to evaluate soft-tissue slides such as Pap smears. Using Med-Seg, physicians and health care practitioners can take any unmanipulated medical image and segment it to “see” features in the image that were not previously visible to the naked eye. The clinicians can additionally isolate one particular area of interest in an image to compare it with many other reference images databased at other health care facilities, for instance.

As an open workstation, the Med-Seg system is composed of a front-end terminal for segmentation feature extraction, pattern recognition, and classification of the medical images. These images can be transmitted to Med-Seg via satellite, cable, digital subscriber line, or dial-up (for smaller images).
With faster, more precise identification of medical abnormalities, Med-Seg aims to reduce pain and suffering, as well as the costs associated with exploratory surgery and late decisions due to delayed diagnostic results and/or poor image quality. Bartron anticipates that its technology’s rapid detection of pathogenic organisms could eventually play a critical role in handling bioterrorism or battlefield use of biological agents.

Bartron’s initial strategy for the Med-Seg system is to work with research institutions and universities to develop proprietary databases which Bartron will solely own. The University of Connecticut School of Dental Medicine made the first purchase of a Med-Seg device in July 2003. It is applying the imaging system to evaluate
jaw X-rays for tooth decay and bone loss. Results so far show that diagnostic data are much more readily visible with Med-Seg. In April of this year, the school reported
that its Med-Seg-based approach “appears to provide dramatic improvement over other approaches for diagnosing osteoporosis.”

U.S. Food and Drug Administration approval is being pursued by Bartron for further developments, including research related to drug development. Meanwhile, NASA is advancing its HSEG software to learn more about the region of space controlled by Earth’s magnetic field. HSEG is helping to identify and extract magnetospheric radio-echo and natural plasma-wave signals recorded by the Radio Plasma Imager on the NASA Imager for Magnetopause-to-Aurora Global Exploration mission.

Med-Seg™ is a trademark of Bartron Medical Imaging, LLC.

Using Med-Seg,™ physicians and health care practitioners can take any unmanipulated medical image, such as a digitized mammogram, and segment it to “see” features in the image that were not previously visible to the naked eye.