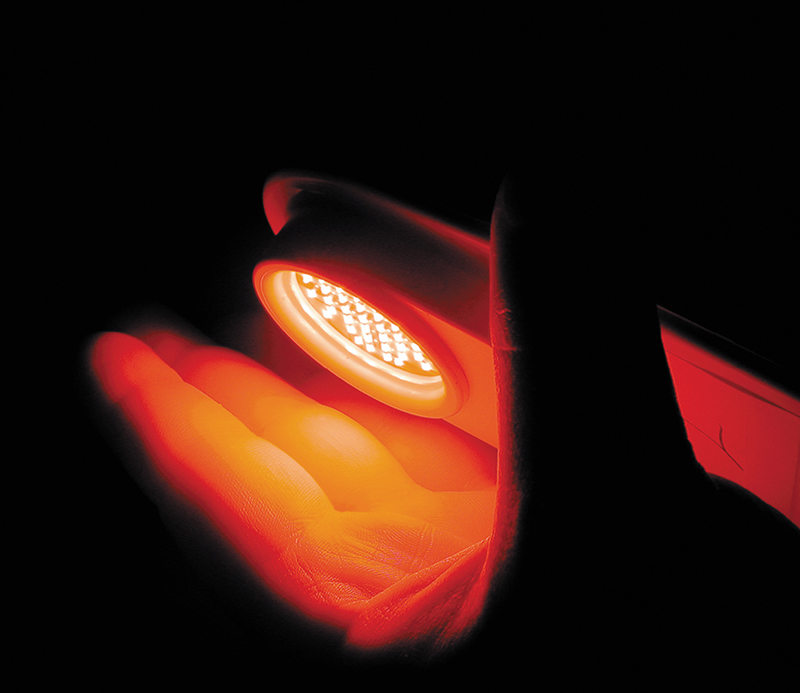 In 1993, Quantum Devices, Inc. (QDI), of Barneveld, Wisconsin, began developing the HEALS (High Emissivity Aluminiferous Light-emitting Substrate) technology to provide high-intensity, solid-state LED lighting systems for NASA Space Shuttle plant growth experiments. The company evolved out of cooperative efforts with the Wisconsin Center for Space Automation and Robotics (WCSAR) at the University of Wisconsin-Madison—a NASA center for the Commercial Development of Space. Ronald W. Ignatius, QDI’s president and chairman, represented one of WCSAR’s industrial partners at the time. WCSAR was conducting research on light sources for promoting food growth within closed environments where humans would be present for a long duration, such as the Space Shuttle and the International Space Station.

With the support of WCSAR, Ignatius experimented with LEDs, which provide high-energy efficiency and virtually no heat, despite releasing waves of light 10 times brighter than the Sun. Ignatius admits that some scientists involved in the project were skeptical at first, thinking that the idea of using LEDs to promote plant growth was far-fetched. The experiments, however, demonstrated that red LED wavelengths could boost the energy metabolism of cells to advance plant growth and photosynthesis. This finding prompted Ignatius to develop a line of LED products that emit the exact wavelength of light that plants use in photosynthesis.

“Our company gives credit to Dr. Ray Bula, the director of WCSAR, for having the foresight to go against the prevailing dogma of the time and design the first plant experiment using monochromatic light to grow lettuce plants,” Ignatius proclaims.

In 1989, Ignatius formed QDI to bring the salt grain-sized LEDs to market, and in October 1995, the light sources made their Space Shuttle flight debut on the second U.S. Microgravity Laboratory Spacelab mission (STS-73, Columbia).

When NASA determined that red LEDs could grow plants in space, Marshall Space Flight Center awarded QDI several Small Business Innovation Research (SBIR) contracts to investigate the effectiveness of the broad-spectrum diodes in medical applications. The contracts, issued from 1995 to 1998, focused on increasing energy inside human cells. It was NASA’s hope that the LEDs would not only yield medical benefits on Earth, but that they would help to stem the loss of bone and muscle mass in astronauts, which occurs during long periods of weightlessness. (In space, the lack of gravity keeps human cells from growing naturally.) Furthermore, since wounds are slow to heal in a microgravity environment, LED therapy could accelerate healing and keep what would be termed as minor wounds on Earth from becoming mission-catastrophic in space.

In addition to promoting cell growth, the red LEDs are capable of activating light-sensitive, tumor-treating drugs that, when injected intravenously, could completely destroy cancer cells while leaving surrounding tissue virtually untouched. The technique, approved by the U.S. Food and Drug Administration (FDA) for use in laboratory and human trials, is known as Photodynamic Therapy.

With the SBIR assistance from NASA, QDI set out to alter a surgical probe that could emit long waves of red light to stimulate a Benzoporphyrin-derivative drug called Photofrin, which delivers fewer post-operative side effects than comparable drugs. Ignatius additionally developed a friendly and successful working relationship with Dr. Harry Whelan, a professor of pediatric neurology and director of hyperbaric medicine at the Medical College of Wisconsin in Milwaukee. The two had met after Ignatius came across a newspaper article highlighting Whelan’s ground-breaking brain cancer surgery technique, which uses drugs stimulated by laser lights to accelerate healing. Accordingly, QDI provided more than $1.25 million from its SBIR contracts to support Whelan’s pioneering photobiomodulation research and bring him onboard to help improve the surgical probe.

Collectively, Ignatius, Whelan, and researchers from NASA successfully altered the probe for pediatric brain tumors and the prevention of oral mucositis (a common side effect of chemotherapy and radiation treatments) in pediatric bone marrow transplant patients at the Medical College of Wisconsin. In May 1998, a 20-year-old female became the first patient to undergo surgery with the modified probe. The young woman had endured six brain surgeries and chemotherapy and radiation treatments over a span of 10 years, but her aggressive cancer kept coming back. Having exhausted all of her conventional treatment options, she turned to the NASA-sponsored Photodynamic Therapy technology.

During the procedure, surgeons excised as much of the recurring brain tumor as they could, then injected the light-activated Photofrin into her bloodstream and inserted the LED probe into the remaining tumor tissue. The probe, which casts long wavelengths that generate less heat and penetrate deeper into tissue than the shorter wavelengths of traditional medical lasers, proved to be both safe and effective, as the tumor never returned and the patient recovered with no complications. A second operation that took place 3 months later on a male patient was also deemed successful by Whelan and his team of Medical College of Wisconsin surgeons.

FDA-approved clinical trials continued at several other facilities over the next 3 years, including the Roswell Park Cancer Institute in Buffalo, New York; Rush-Presbyterian-St. Luke’s Medical Center in Chicago; and the Instituto de Oncologia Pediatrica in Sao Paulo, Brazil. QDI became recognized as a U.S. Space Foundation “Space Technology Hall of Fame” award recipient in 2000 and a Marshall Space Flight Center “Hallmark of Success” in 2004.

The positive clinical trial results, as well as continued support from NASA and follow-on research grants from the Defense Advanced Research Projects Agency, helped QDI and the Medical College of Wisconsin to fully transition space technology into a new, non-invasive medical device. The WARP 10 (Warfighter Accelerated Recovery by Photobiomodulation) is a high-intensity, hand-held, portable LED unit intended for the temporary relief of minor muscle and joint pain, arthritis, stiffness, and muscle spasms. It also promotes relaxation of muscle tissue and increases local blood circulation. Unlike the surgical probe, the WARP 10 does not require intravenous medicine; instead, the unit can be placed directly on the skin where treatment is to occur.

The WARP 10 was designed to aid armed forces personnel on the front lines with immediate first aid care for minor injuries and pain, thereby improving endurance in combat. The “soldier self care” device produces 80 times more photon energy than a 250-Watt heat lamp, yet it remains cool to the touch. The power advantage reduces the time required for each therapeutic dose and provides for faster multi-dose exposures when needed, without the harmful effects of ultraviolet solar radiation. The U.S. Department of Defense and the U.S. Navy are currently issuing WARP 10 to crews on submarines and Special Forces operations.

QDI has introduced an FDA-approved consumer version sharing the same power and properties of the military model, as an alternative to the cost and complications associated with overuse of non-steroidal anti-inflammatory drugs (NSAIDs) for persistent pain relief. According to a Mayo Clinic study, adverse events associated with the use of NSAIDs are reported more frequently to the FDA than such events associated with any other group of drugs. Furthermore, conservative calculations for the United States estimate that approximately 107,000 patients are hospitalized each year for NSAID-related gastrointestinal complications and at least 16,500 NSAID-related deaths occur annually among arthritis patients alone, according to compiled research.

QDI is shedding the risks and costs linked with these anti-inflammatory drugs in favor of shedding light on safe and economical human healing.

HEALS® and WARP 10® are registered trademarks of QDI, Inc.

Photodynamic™ Therapy is a trademark of QDI, Inc. 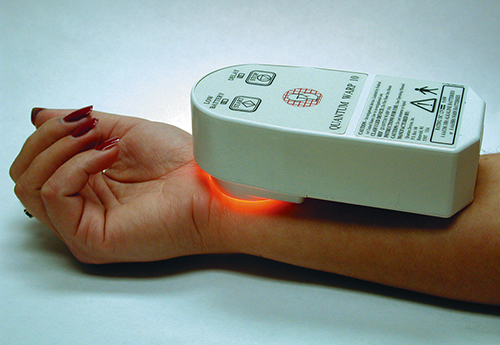 The WARP 10 was designed to assist armed forces personnel with immediate first aid and care for minor injuries and pain. A consumer version is also available.

Red light-emitting diodes are growing plants in space and healing humans on Earth.