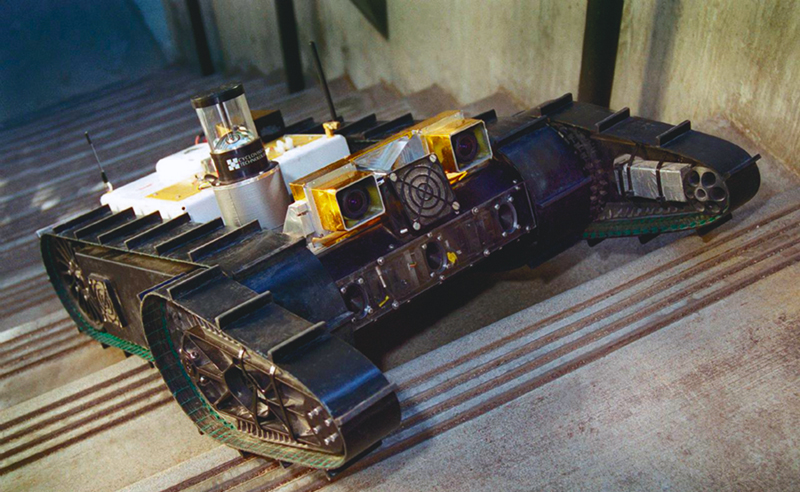 As NASA’s lead center for creating robotic spacecraft and rovers, the Jet Propulsion Laboratory (JPL) builds smart machines that can perform very complicated tasks—far, far away from the homeland.

JPL’s robotic proficiency is making an impact millions of miles away on Mars, where two rovers are presently unlocking the secrets of the Red Planet’s rugged terrain, and thousands of miles away in the embattled regions of Iraq and Afghanistan, where robots sown from the seeds of JPL machines have been deployed to be the “eyes and ears” of humans on the front line. This commercial offspring, known as the PackBot Tactical Mobile Robot, is manufactured by iRobot, Inc., of Burlington, Massachusetts.

A number of iRobot employees have drawn from their NASA experiences to help develop PackBot, including the company’s two co-founders. Colin Angle, the chief executive officer, designed behavior-controlled rovers for NASA that led to the Sojourner rover’s exploration of Mars in 1997, and Helen Greiner, the president, worked at JPL as a student, building gripper systems for space satellites.

Additionally, Tim Ohm, one of iRobot’s senior mechanical engineers, honed his technical expertise with NASA. While at JPL, Ohm helped build a NASA Martian rover whose structural features would ultimately be incorporated into PackBot. Nicknamed “Rocky-7,” this Martian rover served as a terrestrial test bed for the twin Mars exploration rovers, Spirit and Opportunity, currently on Mars. Ohm worked on the lightweight, high-torque actuators used to control Rocky-7 and helped develop its strong, lightweight frame structure and its riveted sheet-metal chassis; the commercial PackBot robot has adopted these lightweight features and the same chassis concept.

In a separate effort, JPL’s research facilities produced payloads for what was considered the official prototype to PackBot, “Urbie,” while its Machine Vision group led the design and implementation processes, all through sponsorship from the Defense Advanced Research Projects Agency’s (DARPA) Tactile Mobile Robot program. Urbie, short for urban robot, was a joint effort of DARPA, JPL, iRobot, the Robotics Institute of Carnegie Mellon University, and the University of Southern California Robotics Research Laboratory. The robot’s initial purpose was mobile military reconnaissance in city terrain, but its rugged and lightweight features also made it useful for police, emergency, and rescue personnel.

With its rugged design, Urbie could be thrown into a building through a window, climb stairs, and fall from a balcony. These actions allow it to investigate urban environments contaminated with radiation, biological warfare, or chemical spills, or search earthquake-stricken buildings and other disaster zones.

Satisfied with Urbie’s developmental progress, the DARPA-sponsored research consortium was ready to move forward with the field-ready successor: PackBot. iRobot was made the lead systems integrator and delivered the new PackBot tactical robots to the U.S. Army, the U.S. Air Force, and the U.S. Navy.

The resulting PackBot technology delivered benefits back to NASA, as well, considering PackBot’s wheel design inspired the wheel design used for Spirit and Opportunity. In fact, the same machining shop that made the first PackBot wheels also made the Mars exploration rovers’ wheels.

PackBot’s first military deployment was to Afghanistan in July 2002, where it was used by U.S. troops to help clear caves and bunkers, search buildings, and cross live anti-personnel mine fields. Prior to deployment, the Army Vice Chief of Staff, General Jack Keane (now retired), saw pictures of soldiers clearing caves with grappling hooks. Keane knew that the military had invested heavily in robotic equipment and did not see why the soldiers were still using this World War II-era technique. As a result, a “team” of PackBot robots was delivered to work with U.S. troops on a “send the robot in first” basis. The soldiers, who had never previously trained with the robots, were quickly won over.

“PackBot is as tough, if not tougher, than any piece of military equipment I have ever used,” according to one U.S. colonel stationed in Afghanistan.

The configuration sent to Afghanistan was the Scout, the simplest, lightest, and the most rugged and survivable PackBot model. The Scout weighs just under 40 pounds (18 kilograms) and is less than 8 inches (20 centimeters) high. It can be loaded into the Army-issued modular lightweight load-carrying equipment (MOLLE) backpack and deployed in minutes. This proved valuable for the Afghanistan missions, as troops frequently had to backpack the robots up the sides of mountains to reach cave entrances. Once deployed, the Scouts can quickly traverse narrow, difficult, hard-to-access terrain, such as caves, tunnels, and bunkers, and cover open ground at speeds up to 8.7 miles (14 kilometers) per hour. This model also possesses a fixed “reconnaissance” head that is equipped with multiple cameras; optional thermal imaging and infrared cameras can be used for night operations.

A second model, called the PackBot EOD, is being deployed in Iraq, in the ongoing fight against improvised explosive devices (IEDs). This robot replaces the need for a dangerous manual approach. Several systems have been damaged or completely destroyed in seeking out IEDs, but have been credited with saving lives in doing so.

Weighing less than 53 pounds (24 kilograms), the PackBot EOD can be carried by a single soldier and deployed in less than 2 minutes. It is equipped with a maneuverable arm that can reach as far as 6.6 feet (2 meters) in any direction to safely reach and disrupt difficult-to-access IEDs and landmines. The arm also allows PackBot to deploy tools, emplace counter charges, and recover forensic evidence. A stabilized telephoto zoom camera at the end of the arm provides assessment and surveillance at standoff distances.

A third model, the PackBot Explorer, boasts a continuous rotating pan-and-tilt head that can rise from the chassis and allow operators to peer over obstacles and gain greater perspective. The Explorer payload comes complete with multiple cameras, a laser pointer, and surveillance and Global Positioning System sensors.

For all PackBot models, operator ease-of-use is provided through intuitive onscreen displays and menus. In addition, the robots’ intelligent behavior eliminates the drudgery of common tasks and protects against accidental misuse, according to iRobot.

PackBot’s patented, self-righting mobility platform is outfitted with dual QuickFlip track articulations, so that the robot can climb grades up to 60 percent and survive submersion in water up to 6.6 feet (2 meters) deep. These “flippers” are capable of continuous, 360-degree rotation that propels the robot up stairs, over curbs, and through daunting obstacles such as rocks, rubble, and debris. If PackBot flips over during operations, the robot uses its flippers to perform a self-righting maneuver in seconds.

Already proven in two recent war scenarios, PackBot is the ideal “point man” to search dangerous or inaccessible areas, providing soldiers with a safe first look so they know what to expect and how to respond.

PackBot® is a registered trademark of iRobot, Inc.

QuickFlip™ is a trademark of iRobot, Inc.

Abstract
A number of iRobot employees have drawn from their NASA experiences to help develop the PackBot Tactile Mobile Robot, used by U.S. troops in Iraq and Afghanistan to help clear caves and bunkers, search buildings, and cross live anti-personnel mine fields. The chief executive officer of iRobot designed behavior-controlled rovers for NASA that led to the Sojourner rover's exploration of Mars in 1997, and the company's president worked at JPL as a student, building gripper systems for space satellites. Additionally, one of iRobot's senior mechanical engineers honed his technical expertise with NASA, by helping to build a Martian rover whose structural features would ultimately be incorporated into PackBot. Nicknamed Rocky-7, this Martian rover served as a terrestrial test bed for the twin Mars exploration rovers, Spirit and Opportunity. PackBot provides soldiers with a safe first look so they know what to expect and how to respond. The robot can climb grades up to 60 percent and survive submersion in water up to 6.6 feet deep, and possesses flippers that propel it up stairs, over curbs, and through daunting obstacles such as rocks, rubble, and debris. If PackBot flips over during operations, the robot uses these flippers to perform a self-righting maneuver in seconds. 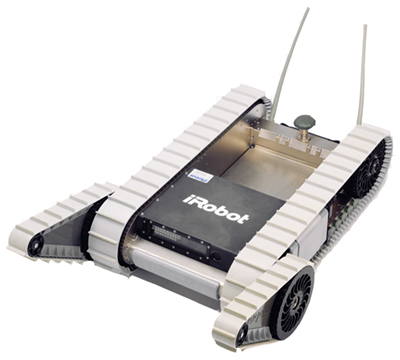 Already proven in Afghanistan and Iraq, the PackBot Scout is the ideal “point man” to search dangerous or inaccessible areas, providing soldiers with a safe first look so they know what to expect and how to respond. 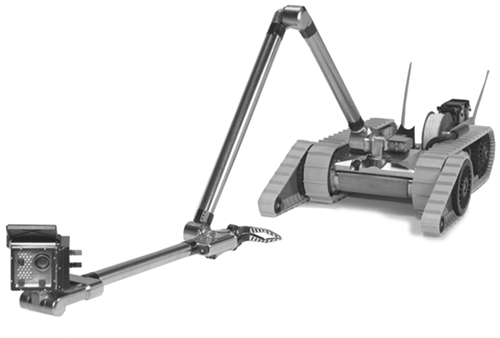 An autonomous stairclimbing behavior is used to take NASA’s “Urbie” robot up multiple flights of stairs without any user control. This is accomplished with a combination of onboard sensors and vision algorithms to sense where the stairs are and which direction the robot should go to drive up the center of the stairs.