Contrary to popular misconception, lightning often strikes the same place twice. Certain conditions are just ripe for a bolt of electricity to come zapping down; and a lightning strike is powerful enough to do a lot of damage wherever it hits. NASA created the Accurate Location of Lightning Strikes technology to determine the ground strike point of lightning and prevent electrical damage in the immediate vicinity of the Space Shuttle launch pads at Kennedy Space Center.

The area surrounding the launch pads is enmeshed in a network of electrical wires and components, and electronic equipment is highly susceptible to lightning strike damage. The accurate knowledge of the striking point is important so that crews can determine which equipment or system needs to be retested following a strike. Accurate to within a few yards, this technology can locate a lightning strike in the perimeter of the launch pad. As an added bonus, the engineers, then knowing where the lightning struck, can adjust the variables that may be attracting the lightning, to create a zone that will be less susceptible to future strikes.

In 2000, Consumer Lightning Technologies, Inc., of Asheville, North Carolina, licensed from NASA the lightning detection technology that was developed at Kennedy. It calls this project the Precision Lightning Strike Location System, and like many good scientific endeavors, it has an abbreviation: PLSLS. Consumer Lightning Technologies was later absorbed by Mag Holdings, Inc., which created the company, Zap Guard USA, Inc. A lightning products and research company, Zap Guard USA is continuing the research and now marketing the PLSLS.

Sam Gasque, past president of Consumer Lightning Technologies and a technical consultant for Zap Guard USA, is still active in the research and marketing phases of the PLSLS. He believes this technology has strong potential for a variety of venues, virtually any place that is prone to lightning strikes. He sees great possibilities for the use of PLSLS at utility companies, airports, government agencies, golf courses, industrial complexes, and racetracks; on farms and in small towns; and as a claims- verification tool for insurance companies.

Zap Guard USA wants to know exactly where lightning strikes, so it can determine what is attracting the lightning. Its research is focused on airports and, specifically, airport runway lighting systems.

Larger airports may have thousands of miles of wire and cable underground, and those that were formerly U.S. military air bases could have 10 times more wire and cable underground than needed. This old, abandoned cable could easily draw a lightning strike and provide a path for lightning to spread to other places within a facility and destroy all electronics in its path. The PLSLS could show maintenance crews the location where lightning has hit. Crews could then correct the situation, usually by digging up unused cables and pipes, so that the attraction to lightning is minimized in the future.

Gasque, back in the 1980s, also developed the Lightning Retardant Cable (LRC) with the help of Kennedy and the Southern Technology Applications Center. This patented technology helps protect electrical wires and cables from strikes, and was featured in Spinoff 1998. It keeps lightning from traveling through the cable, preventing damage to satellites, antennas, and cable systems. The LRC is approved by the U.S. Federal Aviation Administration and recommended by one of the largest insurance companies in the United States.

Zap Guard USA plans to offer the PLSLS technology to airports as a companion product to the LRC. From there, it will expand its campaign to power utilities, sports facilities, defense, industry, and government.

Gasque believes that one of the major social benefits of the new PLSLS technology is verification of insurance claims. “Each year, claims due to lightning strikes continue to climb. Where insurance companies once would simply pay a claim, today they tend to verify the loss first, before settlement. Individuals may now need to prove there was a lightning strike in their area before they can recoup damages,” Gasque explained. “Insurance companies will call the weather service or a similar service to find out if there was a thunderstorm in a claimant’s area on the specific day of loss. If not, the claimant may have trouble getting paid for the damages,” Gasque added. As PLSLS is implemented in given areas, exact information regarding lightning strikes can be given to either the consumer or the insurance company.

According to Gasque, once PLSLS is implemented further, sporting events will become safer, as will air travel and traffic signals. Utilities will also become more reliable during storms. All of these improvements will have a positive economic impact.

The engineers at Zap Guard USA have been pushing the technology for the past few years to make it simpler and more effective. They have, with the help of electrical engineering students at North Carolina State University under the guidance of Dr. Bart Greene, been making major advances to the technology. When they first licensed the device, it was hard wired and had a range of less than 1 mile. Now, a few years later, it is wireless, solar powered, and has a range of more than 30 miles.

As Gasque points out, “The bottom line of PLSLS is once you know exactly where lightning strikes, you can identify the attraction. After you remove or neutralize the attraction, the frequency of strikes is substantially minimized. Minimize the strikes and you create a safer social and industrial environment with minimal loss.”

Abstract
Lightning is attracted by specific factors, including dense clusters of excess wires. Larger airports may have thousands of miles of wire and cable underground, and airports that were formerly U.S. military air bases could have 10 times more wire and cable underground than needed. This old, abandoned cable can easily draw a lightning strike and provide a path for lightning to spread to other places within a facility and destroy all electronics in its path. The Precision Lightning Strike Location System (PSLS) shows maintenance crews the location where lightning has hit. A crew can then correct the situation, usually by digging up unused cables and pipes, so that the attraction to lightning is minimized in the future. 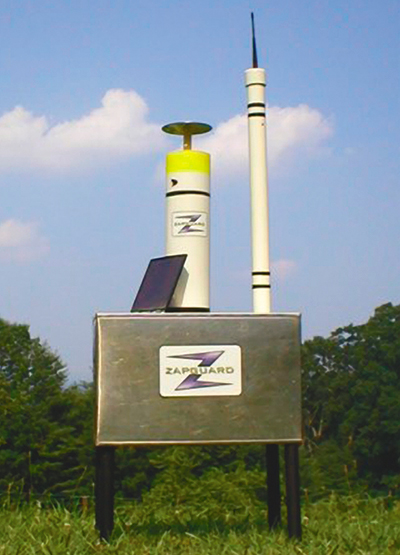 With the Precision Lightning Strike Location System (PLSLS), crews can identify and eliminate the source of lightning attraction. 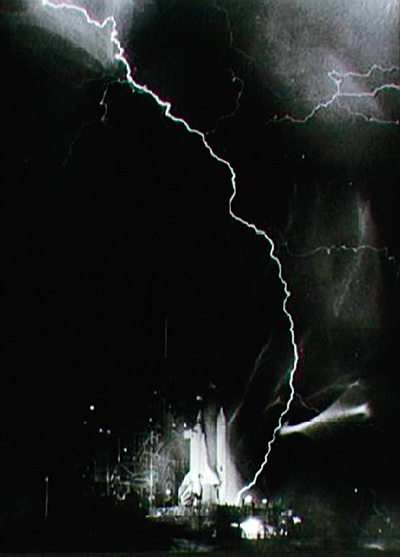 NASA created this technology to determine the strike location of lightning around the launch pads so that crews could test the wires and electrical components after a storm.