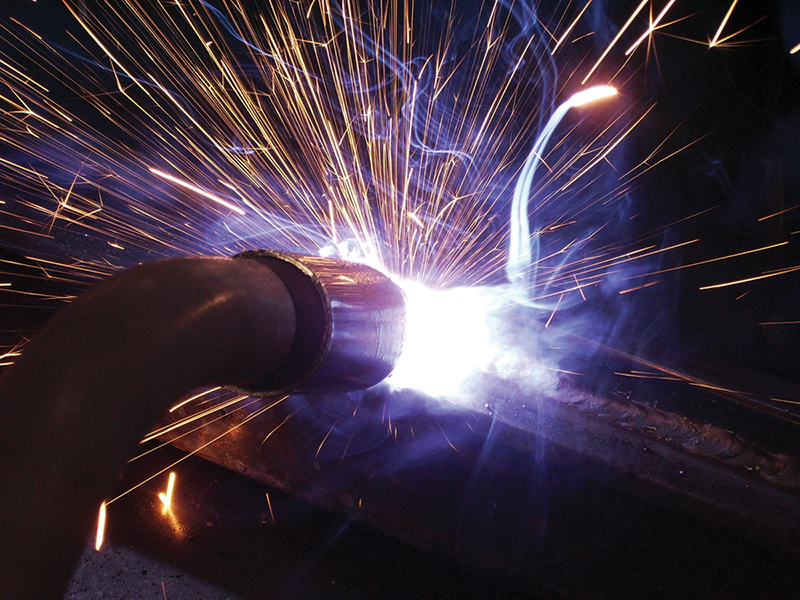 While fashion styles are known to come and go, a certain “shade” from the past has proved otherwise.

Developed in the 1980s, the original SunTiger, Inc., sunlight-filtering lens has successfully withstood the test of time. It is alive and well today in the form of eyewear that caters to the needs of any lifestyle. The technology, first featured in Spinoff 1987, sprung from breakthrough research carried out by Jet Propulsion Laboratory (JPL) scientists James B. Stephens and Dr. Charles G. Miller. The two scientists were tasked with studying the harmful properties of light in space, as well as the artificial radiation produced during laser and welding work, for the purpose of creating an enhanced means of eye protection in industrial welding applications.

While working to apply their space research to these terrestrial applications, Stephens and Miller became engrossed with previously discovered research showing evidence that the eyes of hawks, eagles, and other birds of prey contain unique oil droplets that actually protect them from intensely radiated light rays (blue, violet, ultraviolet) while allowing vision-enhancing light rays (red, orange, green) to pass through. These oil droplets absorb short wavelength light rays which, in turn, reduce glare and provide heightened color contrast and definition for optimal visual acuity. Accordingly, birds of prey possess the ability to distinguish their targeted prey in natural surroundings and from great distances.

Pairing the findings from their initial studies with what they learned from the bird studies, the scientists devised a methodology to incorporate the light-filtering/vision-enhancing dual-action benefits into a filtering system, using light-filtering dyes and tiny particles of zinc oxide. (Zinc oxide, which absorbs ultraviolet light, is also found in sunscreen lotions that protect the skin from sunburn.)

Over the course of 3 years, Stephens and Miller—with help from several other JPL researchers—used this methodology to create and commercialize a transparent welding curtain technology that absorbs, filters, and scatters light to maximize protection of human eyes from the harmful blue and ultraviolet radiation that emanates during welding. If the eyes are not protected during welding, the intense light that is produced can lead to a condition called arc eye, in which ultraviolet light causes inflammation of the cornea and long-term retinal damage.

Following completion of the welding project, Stephens and Miller turned their attention to the related matter of protective glasses. They used computer analysis to design sunglasses for various light environments, including mountain, desert, and fluorescent-lighted office settings. What resulted was a spinoff of a spinoff: the SunTiger lens for every natural and artificial environment. SunTiger, Inc., of Calabasas, California, was formed to market a full line of sunglasses that promised 100-percent elimination of harmful wavelengths and a sharp, crisp viewing perspective.

Over the past few years, the company, now doing business as Eagle Eyes Optics, has extended its product line to over 40 styles of sunglasses that appeal to both genders, no matter the age. There is, for example, the Aviator model that preserves the 1980s retro look and feel and is the number one choice of pilots and police officers; the Classics model that commemorates a variety of eras with its timeless styling; the Tuscan and Forenza models, each crafted in an Italian unisex style with a tortoiseshell frame; the UltraLite Metro model, which weighs less than a half-ounce and features a comfortable wrap-around wire frame; and the Redtail model, which the company says is inspired by styles regularly seen on the ski slopes of Mont Blanc in the French Alps. Regardless of model preference, all Eagle Eyes sunglass products feature the company’s patented TriLenium Gold lenses with complete ultraviolet protection, dual-layer scratch-resistant coating, polarized filters for maximum protection against glare, and high visual clarity to make scenery more vivid.

As the brand expanded, so did the product categories. Eagles Eyes has spent the last couple of years reviewing advancements in optical research. Knowing that diminished eyesight due to conditions such as glaucoma, macular degeneration, cataracts, and low lighting can be both physically detrimental and expensive to treat, Eagle Eyes has developed an advisory board with renowned ophthalmologists and other vision specialists, including expert lens developers. The board has turned up sufficient research showing that damage to the eye, especially to the retina, starts much earlier than most people realize. Therefore, the company has invested in educating members of the general public­—particularly those who are exposed to a lot of sunlight on a daily basis—to protect their eyes a lot earlier in life.

The results of this research can now be enjoyed by consumers seeking to improve their vision in environments with poor lighting. The latest product is called StimuLights. Designed specifically for low-light environments, StimuLights can be worn outdoors while driving in hazy, foggy, dusk and dawn conditions and indoors while working on computers under fluorescent lights, watching television, or reading in dimly lit areas. Special cut-on and cut-off filters in the lenses relax the eyes and provide improved clarity, definition, and color contrast under these conditions. The filters cut on to let the eyes receive useful, vision-enhancing red, yellow, and green light rays and cut off to prevent blue and violet light rays from entering and focusing on the retina. The ultraviolet light is blocked by the lenses, therefore protecting the purple pigment in the eye, called rhodopsin, that promotes vision in low-light conditions. Lack of protection from rhodopsin leaching can lead to night blindness.

Industry-specific lenses are also available. For example, Eagle Eyes manufactures a lens that provides dentists protection against the ultraviolet light they are exposed to when operating curing systems for dental materials.

Eagle Eyes is also launching a line of special lenses and glasses that fall within specific ranges of the wavelength spectrum, at varied nanometer interval cut-ons, to meet specific vision needs for both general and industrial use. These offerings intend to help the eyes transition from one environment to another.

Eagle Eyes is also eyeing up skin protection. The company currently has clinical studies underway for a unique ultraviolet sunscreen.

“We are most proud that the Eagle Eyes brand has become a household name to millions of customers across the world. Now, with our upcoming launch of the ultraviolet sunscreen application, we feel most excited to take our company to the next level in whole body protection,” stated Alan Mittelman, Eagle Eyes president.

Eagle Eyes® is a registered trademark of SunTiger, Inc. 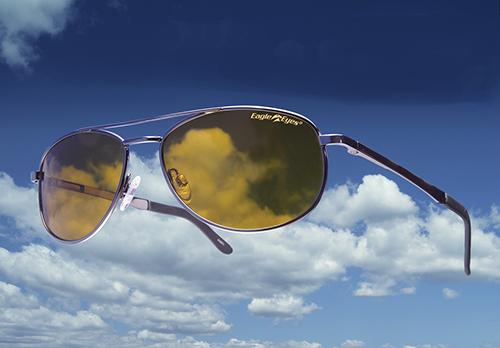 The Aviator style—Eagle Eyes’ original product—is the number one choice of pilots and police officers. Millions of others worldwide are also sporting Aviators for their timeless style. 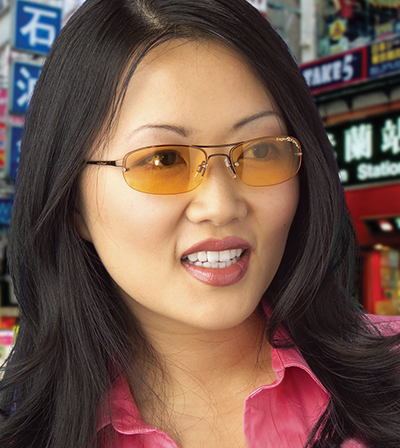 Eagle Eyes’ Solare sunglasses, modeled here, are one of the latest styles available in the company’s line of total-protection, vision-enhancing sunglasses. The southwestern-styled, semi-rimless copper frames feature a soft silicon layer for added comfort around the temples and indiscernible, flexible hinges, while the scratch-resistant lenses shield ultraviolet light and glare.

Intense light emitted during welding can be harmful to the eyes if they are not properly protected. Jet Propulsion Laboratory researchers developed a welding curtain in the 1980s to absorb, filter, and scatter this light and, ultimately, provide optimum eye protection.