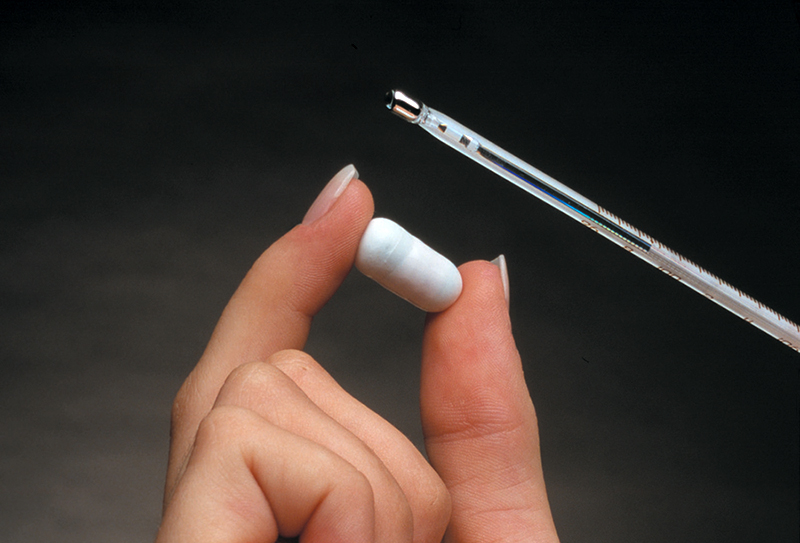 From the football turf to high above the Earth, heat exhaustion is a life-threatening concern. Heat exhaustion, or hyperthermia, is an acute condition caused by excessive exposure to heat and dehydration. It occurs when the body can no longer dissipate heat adequately because of extreme environmental conditions or increased heat production from within. Heat exhaustion may progress to heatstroke when the body’s thermoregulatory mechanisms become overwhelmed and fail, ultimately leading to brain and organ damage or even death.

In football, heat exhaustion is a dangerous reality. Football players take the field for preseason training during the dog days of summer, frequently in full pads, when the heat index can easily exceed 100 °F. On top of all the pads and the sweltering heat—or underneath, to be more precise—are players who weigh over 300 pounds. In fact, there are more than 300 players in the National Football League (NFL) topping 300 pounds. Due to their body mass, these players, who generally serve as offensive and defensive linemen, face a high risk of suffering from heatstroke. Even players in top shape can be at high risk for a variety of reasons, including if they quickly shed pounds to meet stringent weight requirements (a practice known as “cutting weight”), or if they reach critical dehydration because they sweat out fluids without properly replenishing.

In space, astronauts on extravehicular activity assignments are constantly exerting themselves, which can cause rapid increases in body temperature. Although the space suit is insulated to keep astronauts comfortable from the extreme temperatures of space—the side of the suit facing the Sun may reach temperatures as high as 250 °F, while the opposite side, exposed to the darkness of deep space, may reach temperatures as low as -250 °F—astronauts still release body heat and humidity inside the suits, which could lead to heat exhaustion and eventually heatstroke.

In order to monitor the body temperature of astronauts during space flight, NASA teamed up with Johns Hopkins University in the late 1980s to develop an ingestible “thermometer pill” called the Ingestible Thermal Monitoring System. Incorporating a number of space technologies, including wireless telemetry (wireless signal transmission), microminiaturized circuitry, sensors, and batteries, the thermometer pill became commercially available in research, university, and military markets in 1988 (Spinoff 1994). Due to a heightened awareness of heatstroke risk among athletes, brought on by the deaths of a professional football player and a college football player just a week apart in 2001, the product is now well received as a means to detect elevated core body temperature during sporting activities.

Under a $75,000 grant from NASA, the Johns Hopkins University Applied Physics Laboratory worked closely with Goddard Space Flight Center to develop the Ingestible Thermal Monitoring System. The resulting ¾-inch capsule consisted of a silicone coating on the exterior and a telemetry system, a microbattery, and a quartz crystal temperature sensor on the interior.

Once ingested and inside the gastrointestinal tract, the quartz crystal sensor vibrates at a frequency relative to the body’s temperature, producing magnetic flux and transmitting a harmless, low-frequency signal through the body. This signal can then be retrieved by a recorder, outside of the body, that displays the core body temperature reading with an accuracy to within one-tenth of a degree, Celsius.

The temperature-reading pill was first put to use by a Johns Hopkins University veterinarian named Dr. Phillip Brown, who monitored an animal’s temperature during and immediately following surgery. Brown noted that large animals can be erratic and dangerous while coming out of anesthesia; with the capsule, “doctors can monitor animals from a safe distance.”

HQ, Inc., of Palmetto, Florida, licensed the temperature pill in 1988 for widespread commercial use. (The company was then known as Human Technologies, Inc.) The company previously had a licensing agreement in place with the Applied Physics Laboratory for another medical device, so this preexisting relationship opened the door for it to purchase the exclusive patent rights on the temperature pill and market a commercial version globally.

Three years later, in 1991, the pill technology made its debut in space, where astronauts ingested the capsules so that their core body temperatures could be monitored via radiofrequency signals that were transmitted to NASA laptop computers back on Earth.

In 1998, astronaut and U.S. Senator John Glenn swallowed the pill as part of his Space Shuttle Discovery medical experiments. NASA scientists tracked the data produced by the pill to study then 77-year-old Glenn’s condition during his stay in space. Specifically, the scientists wanted to better understand the physical deconditioning experienced by astronauts in the weightlessness of space and the similarities of this space deconditioning to the human aging process.

Heatstroke is the third leading cause of death among athletes in the United States. University of Florida freshman fullback and pre-med student, Eraste Autin, collapsed from heat exhaustion on July 19, 2001, after completing a voluntary workout. The 18-year-old was in a coma for 6 days before he died. Korey Stringer, a Pro Bowl offensive tackle for the NFL’s Minnesota Vikings, died on August 1, 2001, from heatstroke complications suffered during a hot and humid practice session the previous morning. He was 27 years old.

News of the back-to-back tragedies rocked the country, prompting athletic programs to consider better precautions for protecting their athletes from heat-related illnesses. Enter the CorTemp Ingestible Core Body Thermometer Pill, made for NASA and manufactured commercially by HQ, Inc.

Within 1 to 2 hours of ingesting, the CorTemp thermometer pill will reveal vital information necessary for the prevention and treatment of heat-related illnesses. (It will remain in an individual’s system for 18 to 30 hours, before passing safely.) The absence of catheters, probes, and wire connections allow team physicians and certified athletic trainers (ATCs) to noninvasively and wirelessly monitor the core body temperature of multiple athletes in real time during field play or practice. These medical professionals have several options and configurations for tracking athletes. The simplest is direct manual monitoring, whereby they hold the CorTemp Data Recorder (a physiological monitoring system) near the small of an athlete’s back.

The patented, U.S. Food and Drug Administration-regulated pills are numerically coded, and an individual Data Recorder can monitor up to 99 athletes. When a two-digit athlete identification number (or jersey number) is entered on the recorder keypad, that athlete’s core temperature will instantly appear on the recorder’s liquid crystal display. Temperatures of multiple athletes can quickly be taken by an ATC on the sidelines, allowing the athletes to get back on the playing field within seconds. Trainers and physicians can also program the hand-held monitoring unit to set off an alarm if a player’s core temperature reaches a designated level.

Other system components can be added to gather additional data, such as a strap-on heart monitor that allows continuous heart rate monitoring during physical activity. Real-time information can be transmitted wirelessly to a PDA or a PC, or downloaded straight from the Data Recorder, for analysis away from the playing field; CorTemp data-graphing software is included with the purchase of the hand-held recorder. Another component, the CorTemp Barcode Scanner System, provides an accurate input feature that eliminates the possibility of human errors during data entry.

In August 2005, the University of South Florida Sports Medicine Department received a $20,000 grant from the NFL Charities to conduct tests on the school’s football players during their first practice of the season in full pads. With these tests, the sports medicine staff aimed to determine how closely core body temperature correlated with symptoms such as chills, nausea, cramps, and confusion. Of the linemen who participated, one player’s core body temperature reached 103.5 °F. He was pulled immediately from activity. As an indication of how serious a situation this presented, a person usually suffers a heatstroke when core body temperature exceeds 105 °F.

The Tampa-based university has also applied for a Federal grant to use the temperature pill on other athletes in a laboratory setting, where heat and humidity can be carefully controlled, to look for the earliest signs of heat-related illness.

In the NFL, the Jacksonville Jaguars, Philadelphia Eagles, and Minnesota Vikings are using the CorTemp technology to monitor their players. According to HQ, Inc., and widely published reports, all three teams are pleased with how the sensor pill is keeping their players safe from the heat. HQ, Inc., is currently talking with several other professional football teams about investing in its products.

CorTemp is also keeping athletes from overheating in other sports. In track and field, Olympic triathlon champion Simon Whitfield, of Ontario, Canada, used the technology in preparation for the 2004 Olympic Games in Athens. In auto racing, Ford Australia is testing it as part of a program that it hopes will someday lead to a better way of monitoring drivers for dehydration and heat exhaustion. Other sports making use of the pill include soccer, hockey, and cycling.

Beyond the sporting world, the ingestible capsules have been used to monitor the core body temperatures of firefighters as they battle blazes and divers as they work in deep, cold waters. The technology has also been used to monitor critical temperatures in paper manufacturing, in food processing, and in jumbo television sets found at sport stadiums.

Furthermore, doctors studying sleep disorders have used it to determine when people are sleeping most deeply, because that is when their temperature is the lowest. It has additionally been utilized in heart surgery, when patients’ bodies needed to be cooled down.

Applications are expanding for HQ, Inc., leading to a spike in the company’s sales, more celebratory spikes on the football field, and, most importantly, fewer spikes in temperature.

CorTemp™ is a trademark of HQ, Inc.

Abstract
In order to monitor the body temperature of astronauts during space flight, NASA teamed up with Johns Hopkins University in the late 1980s to develop an ingestible thermometer pill" called the Ingestible Thermal Monitoring System. Incorporating a number of space technologies including wireless telemetry (wireless signal transmission) microminiaturized circuitry sensors and batteries the thermometer pill became commercially available in research university and military markets in 1988 (Spinoff 1994). Due to a heightened awareness of heatstroke risk among athletes brought on by the deaths of a professional football player and a college football player just a week apart in 2001 the product is now well received as a means to detect elevated core body temperature during sporting activities. In the NFL the Jacksonville Jaguars Philadelphia Eagles and Minnesota Vikings are using the CorTemp technology to monitor their players. Beyond the sporting world the ingestible capsules have been used to monitor the core body temperatures of firefighters as they battle blazes and divers as they work in deep cold waters. Applications are expanding for HQ Inc. the manufacturer of the commercial temperature pill." 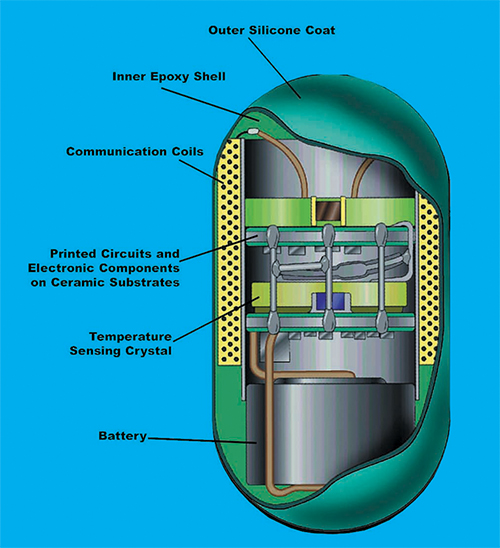 Developed by Goddard Space Flight Center and the Johns Hopkins University Applied Physics Laboratory to monitor the core body temperature of astronauts during space flight, the ingestible “thermometer pill” has a silicone-coated exterior, with a microbattery, a quartz crystal temperature sensor, a space-aged telemetry system, and microminiaturized circuitry on the interior. 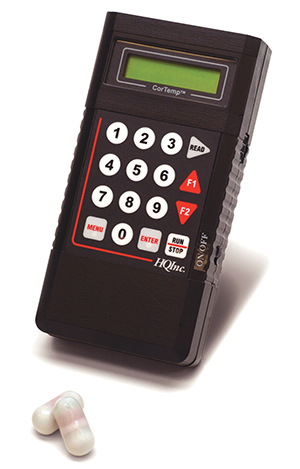 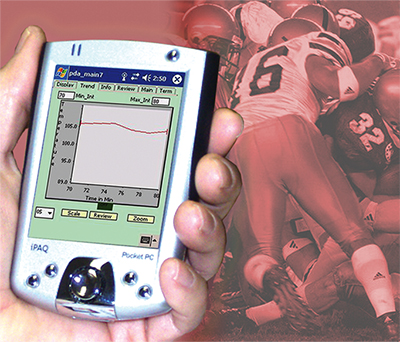 While certified athletic trainers can retrieve athletes’ core temperatures right from the sidelines, they can also get the same information away from the playing field, since it can be transmitted wirelessly to a PDA (pictured) or a PC in real time.

At three-fourths of an inch, the commercially available CorTemp Ingestible Core Body Thermometer Pill wirelessly transmits core body temperature as it travels through the human digestive tract. A sensor within the pill sends a signal that passes harmlessly through the body to the CorTemp Data Recorder outside of the body.