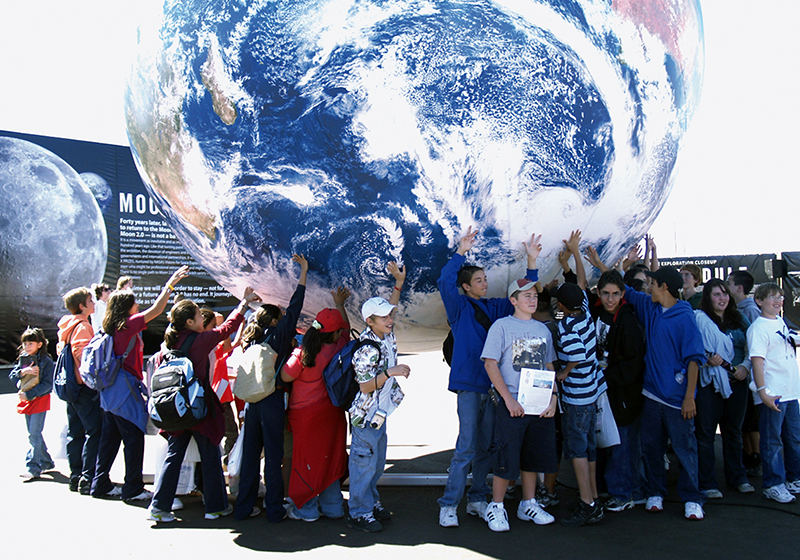 Earth from space—swirling wisps of white against a backdrop of deep azure, punctuated with brown and green swatches of land, all etched on one orb surrounded by black space, floating, seemingly isolated, but teeming with humanity and other forms of life. It is an iconic image, first captured November 10, 1967, by the Applications Technology Satellite (ATS)-3, an unmanned craft conducting payload experiments and examining the space environment. Since then, astronauts and spacecraft have sent back hundreds of pictures of Earth, and each one has had the same breathtaking effect.

Seeing ourplanet from space is one of those self-reflective experiences, like seeing yourself in a picture, or hearing your voice on tape. It tells you something about yourself from outside of yourself. It is an experience that changes your understanding of the world and your place in it.

This phenomenon is best illustrated by the words of space travelers who, upon reaching orbit, have gazed back at Earth and felt the profound impact of viewing the planet in its entirety.

Another veteran of the Apollo 8 mission, William Anders, had this to say: “We came all this way to explore the Moon, and the most important thing is that we discovered the Earth.”

Neil Armstrong, the first person to step foot on the Moon, described the feeling of perspective he experienced when staring out at the Earth from the spacecraft window: “It suddenly struck me that that tiny pea, pretty and blue, was the Earth. I put up my thumb and shut one eye, and my thumb blotted out the planet Earth. I didn’t feel like a giant. I felt very, very small.”

Alan Shepard, commander of the Apollo 14 mission, the eighth manned mission to the Moon, said of the experience of seeing theplanet in its entirety, “If somebody had said before the flight, ‘Are you going to get carried away looking at the Earth from the Moon?’ I would have said, ‘No, no way.’ But yet when I first looked back at the Earth, standing on the Moon, I cried.”

Apollo 15 astronaut, James Irwin, said of the experience, “As we got further and further away, it [the Earth] diminished in size. Finally it shrank to the size of a marble, the most beautiful you can imagine. That beautiful, warm, living object looked so fragile, so delicate, that if you touched it with a finger it would crumble and fall apart. Seeing this has to change a man.”

Astronaut Alfred Worden, another of the original Apollo crew, and pilot of the Apollo 15 mission, said of his experience, “Now I know why I’m here. Not for a closer look at the Moon, but to look back at our home, the Earth.”

Years later, space shuttle astronauts are still finding the view of Earth from space a humbling and profound experience. Don Lind, astronaut aboard the STS-51B mission said, “Think about the picture of the Earth coming up over the horizon of the Moon, which I call the picture of the century. Every crew that went to the Moon took that same picture. It is probably as moving as anything in reorienting people’s idea to the whole world concept.”

The experience was perhaps best illustrated, however, by Sultan bin Salman bin Abdulaziz Al Saud, a Saudi Arabian payload specialist aboard STS-51G, a space shuttle mission comprised of American, French, and Saudi astronauts, when he said, “The first day or so, we all pointed to our countries. The third or fourth day, we were pointing to our continents. By the fifth day, we were aware of only one Earth.”

In 1985, inspired by the pictures he had seen of the Earth from space, Eric J. Morris founded a company devoted to designing and producing photorealistic replicas of our planet. The company, Orbis World Globes, is located in Eastsound, Washington, and creates inflatable globes in many sizes that depict Earth as it is seen from space, complete with atmospheric cloud cover.

NASA took notice of Orbis globes and employed a 16-inch-diameter EarthBall for an educational film it made aboard the STS-45 shuttle mission. “The Atmosphere Below,” shot during the 9-day mission aboard Atlantis in 1992, features astronauts using the EarthBall to explain how scientists use the unique vantage point of space to study the Earth’s atmosphere.

Though the cloud cover has been slightly reduced in order for most of the landforms to be visible, Orbis globes are otherwise meteorologically accurate. In the Northern Hemisphere, it is fall, and it is spring in the Southern Hemisphere.

The satellite image now printed on all Orbis globes displays 1-kilometer resolution, which means that each pixel in the digital image represents 1 square kilometer of the planet’s surface. It is 21,600 by 43,200 pixels in size. According to Orbis, while specific portions of the Earth have been imaged with higher detail, as of 2002, the satellite image it uses was the most detailed composite image of the entire world in existence.

Orbis inflatable globes are available in sizes from 1 to 100 feet in diameter, with the most common being the standard 16-inch and 1-meter diameter EarthBalls. These smaller globes are ideal for educational purposes and have been used everywhere from preschools to universities. They come with a 20-page book of facts, games, and suggested activities, including a game of indoor classroom volleyball. They have been sold in thousands of gift shops, toy stores, museum shops, and specialty stores.

Over 100 Orbis world globes from 2 to 20 feet in diameter have been custom-built for a variety of display purposes. They have been used as temporary exhibits at numerous events, such as conferences, trade shows, festivals, concerts, and parades. For these types of purposes, the company maintains a fleet of rental globes ranging from 3 to 16 feet in diameter. Globes of various sizes have been exhibited at numerous events worldwide. Last year, a 16-foot-diameter Orbis globe was exhibited at the United Nations’ World Urban Forum, in Vancouver, Canada; the Space 2006 conference, in San Jose, California; and the X-Prize Cup Personal Spaceflight Exposition, in Las Cruces, New Mexico.

Giant Orbis globes have been put on permanent display at schools, churches, museums, libraries, and a variety of other locations. Orbis recently installed a 10-foot- diameter, internally illuminated, rotating globe in the education center at Washington’s Fairchild Air Force Base; an 8-foot-diameter rotating world globe at the entrance to the new Evolving Planet exhibit in Chicago’s Field Museum; and another 8-foot-diameter rotating world globe with NightGlow Cities in the new Ripley’s Believe It or Not! museum in New York City’s Times Square.

Orbis globes can be mounted on floor pedestals, suspended overhead, filled with helium and tethered in the air, or even deployed as remote-controlled flying “EarthBlimps.” Small electric motors enable the globes to slowly rotate on their axes, as does the real Earth. Internal illumination, custom graphics, and many other options are also available.

Twenty-two years ago, Eric J. Morris mused, “If only others could see Earth as the astronauts observe it, perhaps they would be similarly inspired.” Considering the success of Orbis World Globes, people of all ages are being inspired everyday to appreciate our wondrous planet, Earth.

Abstract
Orbis World Globes creates inflatable globes-Earthballs-in many sizes that depict Earth as it is seen from space, complete with atmospheric cloud cover. Orbis designs and produces the most visually authentic replicas of Earth ever created, and NASA took notice of Orbis globes and employed a 16-inch diameter EarthBall for an educational film it made aboard the STS-45 shuttle mission. Orbis later collaborated with NASA to create two 16-foot diameter world globes for display at the 2002 Olympic Winter Games in Salt Lake City, using more detailed satellite imagery. The satellite image now printed on all Orbis globes displays 1-kilometer resolution and is 21,600 by 43,200 pixels in size, and Orbis globes are otherwise meteorologically accurate, though the cloud cover has been slightly reduced in order for most of the landforms to be visible. Orbis also developed the exclusive NightGlow Cities feature, enabling EarthBalls to display the world's cities as they appear as the Earth revolves from daylight into night. Orbis inflatable globes are available in sizes from 1 to 100 feet in diameter, with the most common being the standard 16-inch and 1-meter diameter EarthBalls. Applications include educational uses from preschools to universities, games, and for a variety of display purposes at conferences, trade shows, festivals, concerts, and parades. A 16-foot diameter Orbis globe was exhibited at the United Nations' World Urban Forum, in Vancouver, Canada; the Space 2006 conference, in San Jose, California; and the X-Prize Cup Personal Spaceflight Exposition in Las Cruces, New Mexico. 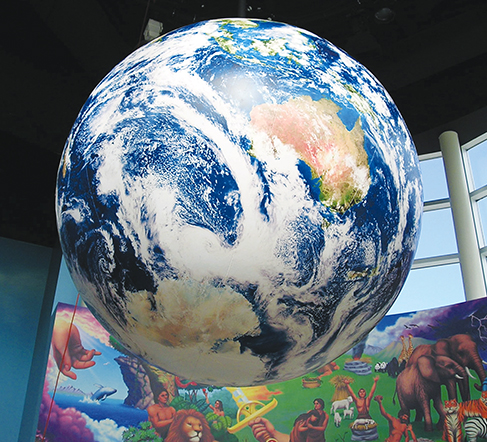 This 6-foot-diameter rotating Orbis globe is installed in the Children’s Wing Atrium of Northland Church in Longwood, Florida. 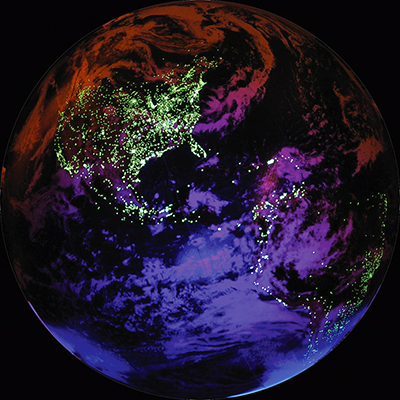 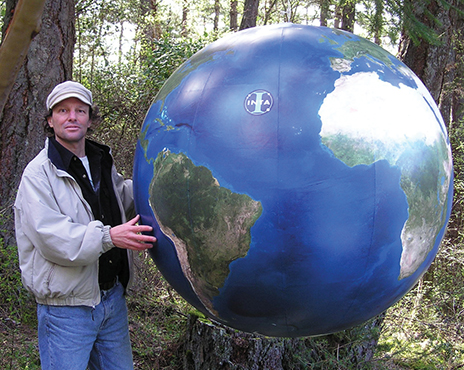 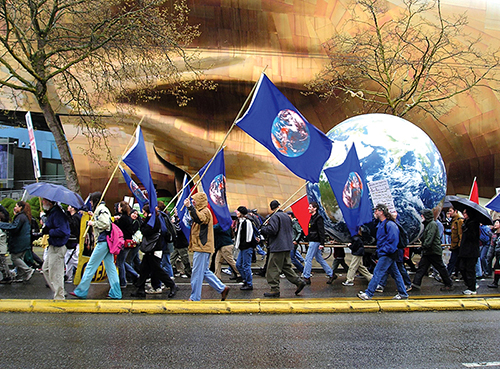 This 10-foot-diameter Orbis globe is being carried in a peace march in Seattle, Washington, in March 2005. Orbis globes have been a magnet for spectators and cameras in numerous parades, performances, and rallies around the world. (The gold building in the background is the Experience Music Project designed by renowned architect Frank Gehry.)

This 16-foot-diameter, pedestal-mounted, rotating globe was featured at the 2006 Wirefly X-Prize Cup in Las Cruces, New Mexico. This exposition of personal space flight is a “celebration of forward-looking technology, space exploration, and education,” attracting thousands of people every October.