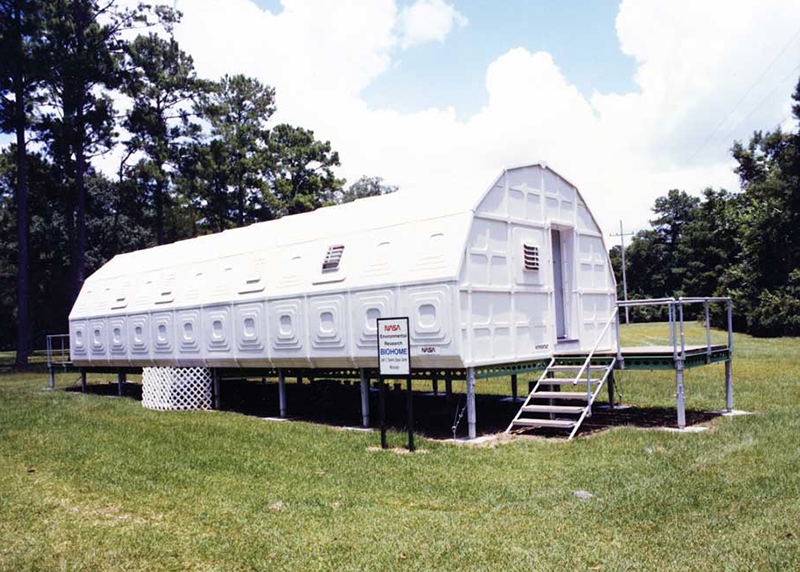 Although one of NASA’s goals is to send people to the far reaches of our universe, it is still well known that people need Earth. We understand that humankind’s existence relies on its complex relationship with this planet’s environment­—in particular, the regenerative qualities of Earth’s ecosystems.

In the late 1960s, B.C. “Bill” Wolverton was an environmental scientist working with the U.S. military to clean up the environmental messes left by biological warfare centers. At a test center in Florida, he was heading a facility that discovered that swamp plants were actually eliminating Agent Orange, which had entered the local waters through government testing near Eglin Air Force Base. After this success, he wanted to continue this line of research and moved to what was at the time called the Mississippi Test Facility, but is now known as NASA’s Stennis Space Center.

He was funded by the Space Agency to research the environment’s natural abilities to clean itself as part of what is now Stennis’ Environmental Assurance Program. The goals were to clean the Center of chemicals left behind through wastes and to supply information to NASA engineers about closed-environment “eco” support that may prove helpful in designing sustainable living environments for long-term habitation of space. A tertiary goal was to provide usable technologies to NASA’s Technology Utilization Program, essentially making the research available to the American public.

The first step for Wolverton’s research was to continue the remediation work he had started with the military. He was tasked with using plants to clean waste water at the NASA Center. To this day, Wolverton’s design, which replaces a traditional septic system with water hyacinths, is still in use. His research then turned to using plants to improve air quality.

In 1973, NASA scientists identified 107 volatile organic compounds (VOCs) in the air inside the Skylab space station. Synthetic materials, like those used to construct Skylab, give off low levels of chemicals. This effect, known as off-gassing, spreads the VOCs, such as formaldehyde, benzene, and trichloroethylene, all known irritants and potential carcinogens. When these chemicals are trapped without circulation, as was the case with the Skylab, the inhabitants may become ill, as the air they breathe is not given the natural scrubbing by Earth’s complex ecosystem.

Around the same time that Wolverton was conducting his research into VOCs, the United States found itself in an energy crisis. In response, builders began making houses and offices more energy efficient. One of the best ways to do this was to make the buildings as airtight as possible. While keeping temperature-controlled air in place, this approach reduced circulation. Combined with the modern use of synthetic materials, this contributed to what became known as Sick Building Syndrome, where toxins found in synthetic materials become concentrated inside sealed buildings, making people feel sick.

The solution Wolverton sought was not to make indoor environments less energy efficient or to move away from the convenience of synthetic materials; rather, the plan was to find a solution that restores personal environments. The answer, according to a NASA report later published by Wolverton in 1989, is that “If man is to move into closed environments, on Earth or in space, he must take along nature’s life support system.” Plants.

One of the NASA experiments testing this solution was the BioHome, an early experiment in what the Agency called “closed ecological life support systems.” The BioHome, a tightly sealed building constructed entirely of synthetic materials, was designed as suitable for one person to live in, with a great deal of the interior occupied by houseplants. Before the houseplants were added, though, anyone entering the newly constructed facility would experience burning eyes and respiratory difficulties, two of the most common symptoms of

Sick Building Syndrome. Once the plants were introduced to the environment, analysis of the air quality indicated that most of the VOCs had been removed, and the symptoms disappeared.

After serving over 30 years as a government scientist, Wolverton retired from civil service but continued his work in air and water quality by founding Wolverton Environmental Services Inc. The company, based just down the road from Stennis in Picayune, Mississippi, is an environmental consulting firm that gives customers access to Wolverton’s decades of cutting-edge bioremediation research.

Wolverton published his findings about using plants to improve indoor air quality in dozens of technical papers while with the Space Agency and as a simple consumer-friendly book, “How to Grow Fresh Air: 50 Houseplants That Purify Youror Office.” In it, he explains, in easy-to-understand terms, how plants emit water vapor that creates a pumping action to pull contaminated air down around a plant’s roots, where it is then converted into food for the plant. He then goes on to explain which plants and varieties remove the most toxins, as well as to rate each plant for the level of maintenance it requires. The book has now been translated into 12 languages and has been on the shelves of bookstores for nearly 10 years. Wolverton has also published a companion book, “Growing Clean Water: Nature’s Solution to Water Pollution,” which explains how plants can clean waste water.

Another one of Wolverton’s discoveries is that the more air that is allowed to circulate through the roots of the plants, the more effective they are at cleaning polluted air. To take advantage of this science, Wolverton has teamed with the Japanese company, Actree Corporation, to develop what the Japanese firm is marketing as the EcoPlanter. Using high-efficiency carbon filters and a root-level circulation system, the pot allows the plant to remove approximately 200 times more VOCs than a single traditionally-potted plant can remove.

The company has recently begun to assess the ability of the EcoPlanter to remove formaldehyde from the many travel trailers furnished by the Federal Emergency Management Agency to victims of Hurricane Katrina. The interiors of the trailers make heavy use of particleboard, which off-gasses formaldehyde. Many of the trailers have been found to exceed the recommended levels of formaldehyde for human safety. Initial tests of the EcoPlanter have been very encouraging, but other testing is still needed.

Research has also suggested that plants play a psychological role in welfare, and that people actually recover from illness faster in the presence of plants. Wolverton’s company is working with another Japanese company, Takenaka Garden Afforestation Inc., of Tokyo, to design ecology gardens. These are carefully designed gardens that help remove the toxins from the air in hospitals, as well as provide the healing presence of the foliage.

On the home front, in a partnership with Syracuse University, Wolverton Environmental is engineering systems consisting of modular wicking filters tied into duct work and water supplies, essentially tying plant-based filters into heating, ventilation, and air conditioning (HVAC) systems. This whole-building approach has recently been licensed by Wolverton to Phytofilter Technologies Inc., of Saratoga Springs, New York, which is currently constructing a prototype of a system that is intended to clean the water and air circulation systems of entire buildings using the natural abilities of plants. The design includes units that are built into existing HVAC units. The plants can be placed throughout buildings, in atriums, or in roof gardens and then hooked into the building’s HVAC units through forced-air filters.

Wolverton Environmental is also in talks with designers of the new Stennis Visitor’s Center, who are interested in using its designs for indoor air-quality filters.

Abstract
Wolverton Environmental Services Inc., founded by longtime government environmental scientist B.C. Bill" Wolverton is an environmental consulting firm that gives customers access to the results of his decades of cutting-edge bioremediation research. Findings about how to use plants to improve indoor air quality have been published in dozens of NASA technical papers and in the book "How to Grow Fresh Air: 50 Houseplants That Purify Your Home or Office." The book has now been translated into 12 languages and has been on the shelves of bookstores for nearly 10 years. A companion book "Growing Clean Water: Nature's Solution to Water Pollution explains how plants can clean waste water. Other discoveries include that the more air that is allowed to circulate through the roots of the plants, the more effective they are at cleaning polluted air; and that plants play a psychological role in welfare in that people recover from illness faster in the presence of plants.

Wolverton Environmental is also working in partnership with Syracuse University, to engineer systems consisting of modular wicking filters tied into duct work and water supplies, essentially tying plant-based filters into heating, ventilation, and air conditioning (HVAC) systems. Also, the company has recently begun to assess the ability of the EcoPlanter to remove formaldehyde from interior environments. Wolverton Environmental is also in talks with designers of the new Stennis Visitor's Center, who are interested in using its designs for indoor air-quality filters. 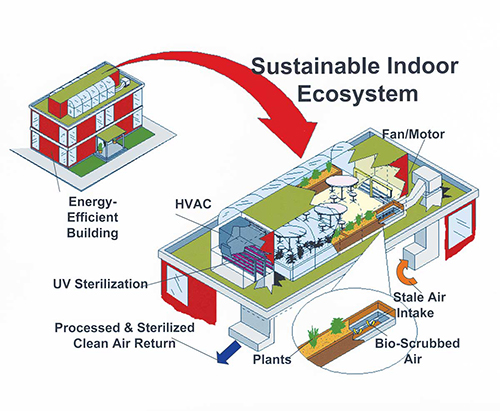 Wolverton Environmental Services Inc. designed this sustainable ecosystem to show how a building’s circulation system and a rooftop garden could work in tandem to clean indoor air.