If you wish to explore a Martian landscape without leaving your armchair, a few simple clicks around the NASA Web site will lead you to panoramic photographs taken from the Mars Exploration Rovers, Spirit and Opportunity. Many of the technologies that enable this spectacular Mars photography have also inspired advancements in photography here on Earth, including the panoramic camera (Pancam) and its housing assembly, designed by the Jet Propulsion Laboratory and Cornell University for the Mars missions. Mounted atop each rover, the Pancam mast assembly (PMA) can tilt a full 180 degrees and swivel 360 degrees, allowing for a complete, highly detailed view of the Martian landscape.

The rover Pancams take small, 1 megapixel (1 million pixel) digital photographs, which are stitched together into large panoramas that sometimes measure 4 by 24 megapixels. The Pancam software performs some image correction and stitching after the photographs are transmitted back to Earth. Different lens filters and a spectrometer also assist scientists in their analyses of infrared radiation from the objects in the photographs. These photographs from Mars spurred developers to begin thinking in terms of larger and higher quality images: super-sized digital pictures, or gigapixels, which are images composed of 1 billion or more pixels.

Gigapixel images are more than 200 times the size captured by today’s standard 4 megapixel digital camera. Although originally created for the Mars missions, the detail provided by these large photographs allows for many purposes, not all of which are limited to extraterrestrial photography.

The technology behind the Mars rover PMAs inspired Randy Sargent at Ames Research Center and Illah Nourbakhsh at Carnegie Mellon University (CMU) to look at ways consumers might be able to use similar technology for more “down-to-Earth” photography and virtual exploration.

In 2005, Sargent and Nourbakhsh created the Global Connection Project, a collaboration of scientists from CMU, Google Inc., and the National Geographic Society, whose vision is to encourage better understanding of the Earth’s cultures through images. This vision inspired the development of their Gigapan products.

After seeing what the Pancams and PMAs could do, Sargent created a prototype for a consumer-version of a robotic camera platform. He worked with Rich LeGrand of Charmed Labs LLC, in Austin, Texas, to design and manufacture the Gigapan robotic platform for standard digital cameras.

The Gigapan robotic platform is, in essence, an intelligent tripod that enables an amateur photographer to set up detailed shots with ease. A user sets the upper-left and lower-right corners of the panorama, and the Gigapan simply will capture as many images as the user or scene requires. With this level of automation, a 500-picture panorama is no more complicated than a 4-picture panorama; only the camera’s memory limits the size of the panorama.

The robotic platform works with the stitching software by precisely manipulating and aligning each shot ahead of time. The Gigapan software complements the robotic platform by arranging the parts of the panorama (potentially hundreds of individual photographs) into a grid where they are stitched together into a single, very large Gigapan image.

The Global Connection Project won a 2006 “Economic Development Award” from the Tech Museum Awards for its work in creating photographic overlays for Google Earth of areas affected by natural disasters. Government workers and concerned citizens used the images on Google Earth to see which areas needed help in the aftermath of Hurricane Katrina, Hurricane Rita, and the 2005 earthquake in Kashmir.

On the Gigapan Web site, a user can display a wide bird’s eye panorama and can then zoom in with impressive bug’s eye high-quality detail. On first impression, a panoramic photograph on Gigapan’s site might seem to be simply a wide-angle cityscape of a temple in Kathmandu. With each successive click, however, the user can zoom deeper and deeper into the photo, revealing more and more clear details: a monk hanging prayer flags on the roof of the temple and the Tibet Kitchen Restaurant and Bar a few blocks behind the temple, with a sign extolling passersby to taste their gourmet food.

As part of a continuing effort to connect people and cultures, the Global Connection Project encourages all users to upload their own panoramas from around the world on the Gigapan site. Users can explore such varied landscapes as a temple in Nepal, the Burning Man festival in the Nevada desert, a market in Guatemala, or the Boston skyline from the Charles River. Because of the much greater number of pixels, the resolution is unprecedented; the Gigapan software and robotic platforms can theoretically produce prints on 40-foot-wide paper without any loss in quality.

Whether or not photographers use the Gigapan mounts and software, anyone can upload their panoramas to the Gigapan Web site. Many users of Gigapan have uploaded standard panorama photographs, as well (although the site suggests photographs be at least 50 megabytes). This is just fine with the Gigapan and the Global Connection Project coordinators, whose aim is simply to encourage exploration and understanding of the various cultures in our world.

The Fine Family Foundation is sponsoring work with the Global Connection Project to enable botanists, geologists, archeologists, and other scientists around the world to document different aspects of the Earth’s cultures and ecosystems using Gigapan technology. Scientists are using Gigapan to document life in the upper redwood forest canopy in California, volcanoes in Hawaii, and glaciers in Norway.

There are also educational uses for the Gigapan: The Pennsylvania Board of Tourism uses Gigapan for Web site visitors wanting to explore Civil War sites virtually. Also, in collaboration with the United Nations Educational, Scientific and Cultural Organization (UNESCO), the Global Connection Project has distributed Gigapan to students in Pittsburgh, South Africa, and the Republic of Trinidad and Tobago, encouraging them to photograph their local culture and share those panoramas with the world. “The hope is that students will be able to have deeper connections to other cultures,” said Sargent.

A time-lapse Gigapan robotic mount is now in development, and a professional unit for larger SLR-style cameras may be released before the end of 2008.

Gigapan™ is a trademark of Carnegie Mellon University. 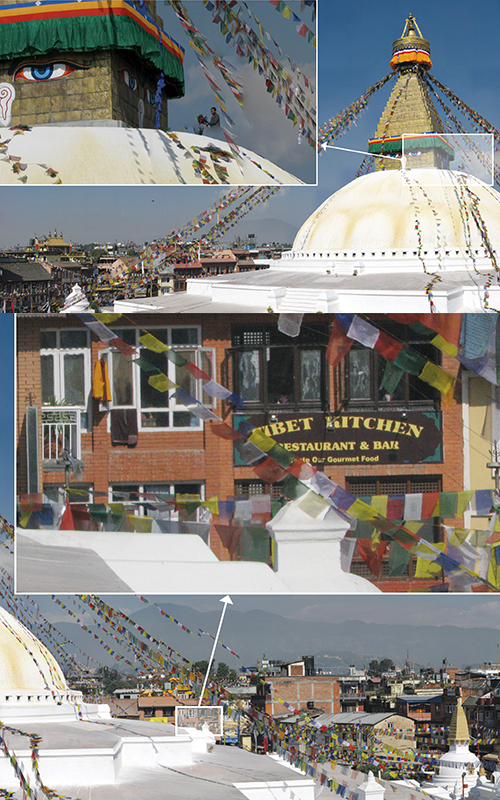 Gigapan allows a photographer to capture extremely high-resolution panoramas, which a user can explore in depth. In this wide view of Boudhanath Stupa in Kathmandu, Nepal, it is possible to zoom all the way into the smallest, barely visible points in the picture, such as the monk standing on the roof of the temple or the sign above the Tibet Kitchen Restaurant and Bar. 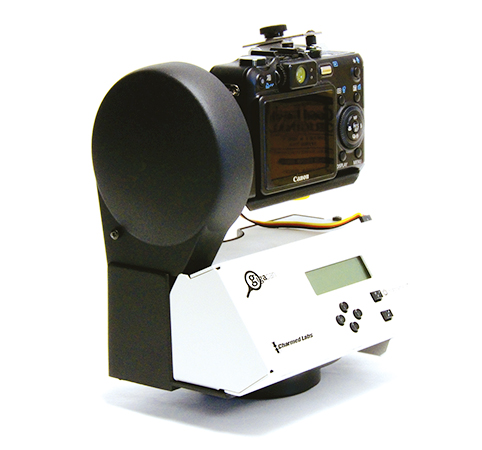