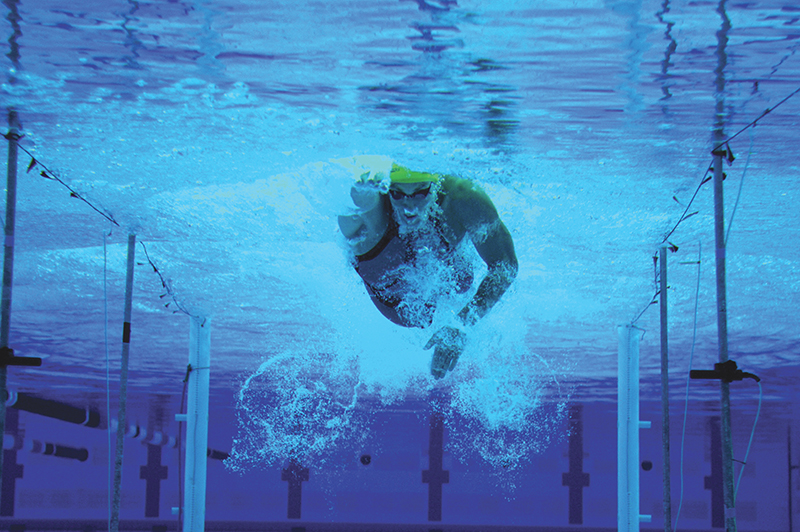 A space shuttle and a competitive swimmer have a lot more in common than people might realize: Among other forces, both have to contend with the slowing influence of drag. NASA’s Aeronautics Research Mission Directorate focuses primarily on improving flight efficiency and generally on fluid dynamics, especially the forces of pressure and viscous drag, which are the same for bodies moving through air as for bodies moving through water. Viscous drag is the force of friction that slows down a moving object through a substance, like air or water.

NASA uses wind tunnels for fluid dynamics research, studying the forces of friction in gasses and liquids. Pressure forces, according to Langley Research Center’s Stephen Wilkinson, “dictate the optimal shape and performance of an airplane or other aero/hydro-dynamic body.” In both high-speed flight and swimming, says Wilkinson, a thin boundary layer of reduced velocity fluid surrounds the moving body; this layer is about 2 centimeters thick for a swimmer.

In spite of some initial skepticism, Los Angeles-based SpeedoUSA asked NASA to help design a swimsuit with reduced drag, shortly after the 2004 Olympics. According to Stuart Isaac, senior vice president of Team Sales and Sports Marketing, “People would look at us and say ‘this isn’t rocket science’ and we began to think, ‘well, actually, maybe it is.’” While most people would not associate space travel with swimwear, rocket science is exactly what SpeedoUSA decided to try. The manufacturer sought a partnership with NASA because of the Agency’s expertise in the field of fluid dynamics and in the area of combating drag.

A 2004 computational fluid dynamics study conducted by Speedo’s Aqualab research and development unit determined that the viscous drag on a swimmer is about 25 percent of the total retarding force. In competitive swimming, where every hundredth of a second counts, the best possible reduction in drag is crucially important. Researchers began flat plate testing of fabrics, using a small wind tunnel developed for earlier research on low-speed viscous drag reduction, and Wilkinson collaborated over the next few years with Speedo’s Aqualab to design what Speedo now considers the most efficient swimsuit yet: the LZR Racer. Surface drag testing was performed with the help of Langley, and additional water flume testing and computational fluid dynamics were performed with guidance from the University of Otago (New Zealand) and ANSYS Inc., a computer-aided engineering firm.

“Speedo had the materials in mind [for the LZR Racer],” explains Isaac, “but we did not know how they would perform in surface friction drag testing, which is where we enlisted the help of NASA.” The manufacturer says the fabric, which Speedo calls LZR Pulse, is not only efficient at reducing drag, but it also repels water and is extremely lightweight. Speedo tested about 100 materials and material coatings before settling on LZR Pulse.

NASA and Speedo performed tests on traditionally sewn seams, ultrasonically welded seams, and the fabric alone, which gave Speedo a baseline for reducing drag caused by seams and helped them identify problem areas. NASA wind tunnel results helped Speedo “create a bonding system that eliminates seams and reduces drag,” according to Isaac. The Speedo LZR Racer is the first fully bonded, full-body swimsuit with ultrasonically welded seams. Instead of sewing overlapping pieces of fabric together, Speedo actually fused the edges ultrasonically, reducing drag by 6 percent. “The ultrasonically welded seams have just slightly more drag than the fabric alone,” Isaac explains. NASA results also showed that a low-profile zipper ultrasonically bonded (not sewn) into the fabric and hidden inside the suit generated 8 percent less drag in wind tunnel tests than a standard zipper. Low-profile seams and zippers were a crucial component in the LZR Racer because the suit consists of multiple connecting fabric pieces—instead of just a few sewn pieces such as found in traditional suits—that provide extra compression for maximum efficiency.

The LZR Racer reduces skin friction drag 24 percent more than the Fastskin, the previous Speedo racing suit fabric; and according to the manufacturer, the LZR Racer uses a Hydro Form Compression System to grip the body like a corset. Speedo experts say this compression helps the swimmers maintain the best form possible and enables them to swim longer and faster since they are using less energy to maintain form. The compression alone improves efficiency up to 5 percent, according to the manufacturer.

Olympic swimmer Katie Hoff, one of the American athletes wearing the suit in 2008 competitions, said that the tight suit helps a swimmer move more quickly through the water, because it “compresses [the] whole body so that [it’s] really streamlined.” Athletes from the French, Australian, and British Olympic teams all participated in testing the new Speedo racing suits.

Similar in style to a wetsuit, the LZR Racer can cover all or part of the legs, depending on personal preference and event. A swimmer can choose a full-body suit that covers the entire torso and extends to the ankles, or can opt for a suit with shorter legs above the knees. The more skin the LZR Racer covers, the more potential it has to reduce skin friction drag. The research seems to have paid off; in March 2008, athletes wearing the LZR Racer broke 13 world records.

Abstract
Because of Langley Research Center's experience in studying the forces of friction and drag, Los Angeles-based SpeedoUSA asked the Agency to help design a swimsuit shortly after the 2004 Olympics. The LZR Racer reduces skin friction drag 24 percent more than the previous Speedo racing suit. The research seems to have paid off; in March 2008, athletes wearing the LZR Racer broke 13 world records. 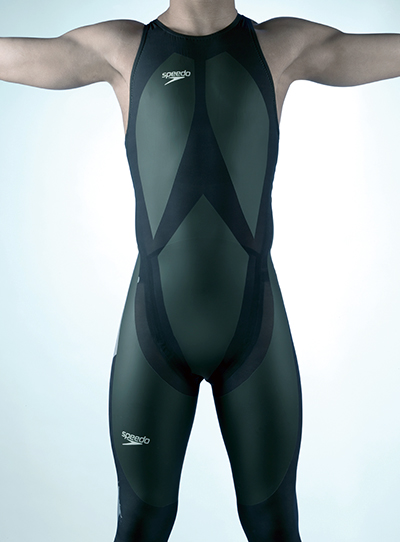 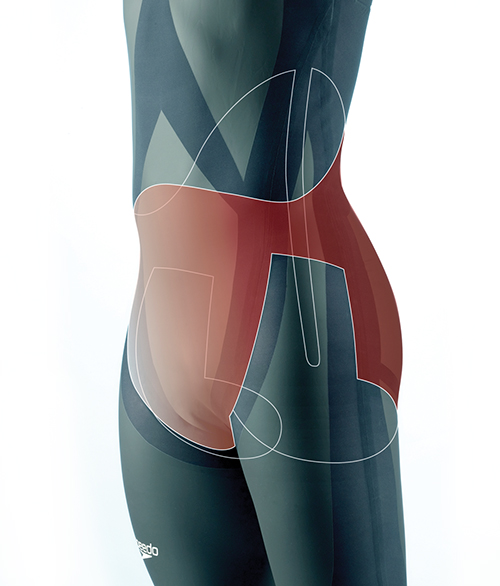 The LZR Racer provides extra compression in key areas to help a swimmer use less energy to swim more quickly.