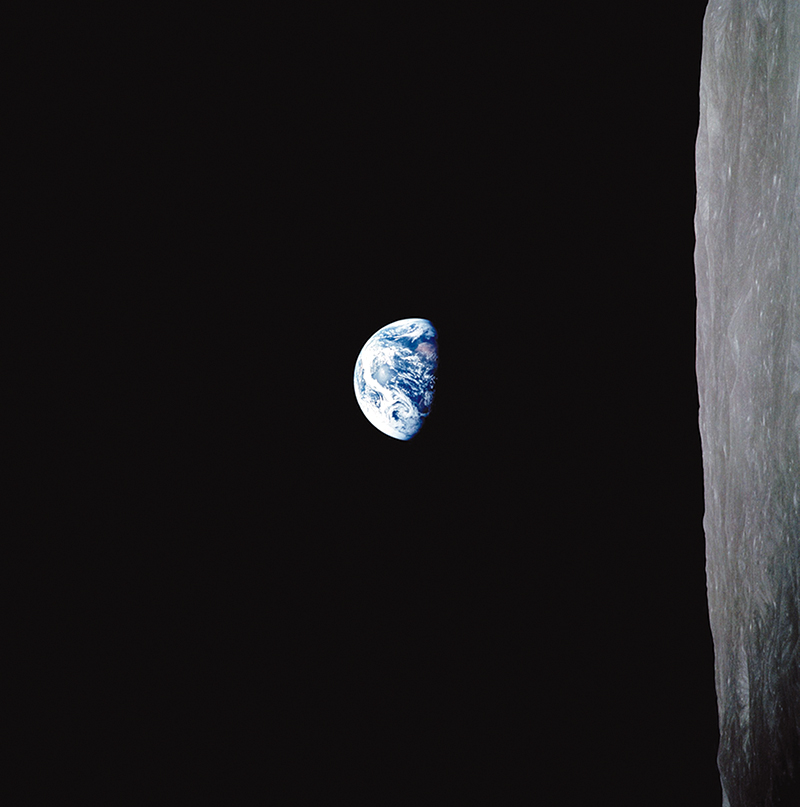 Timeless, beautiful, and haunting images: A delicate blue marble floating in the black sea of space; a brilliant white astronaut suit, visor glowing gold, the entire Earth as a backdrop; the Moon looming large and ghostly, pockmarked with sharp craters, a diaphanous grey on deep black. Photographs from space illustrating the planet on which we live, the space surrounding it, and the precarious voyages into it by our fellow humans are among the most tangible products of the Space Program. These images have become touchstones of successive generations, as the voyages into space have illuminated the space in which we live.

In 1962, Walter Schirra blasted off in a Mercury rocket to become the fifth American in space, bringing with him the first Hasselblad camera to leave the Earth’s atmosphere, recently purchased from a camera shop near Johnson Space Center in Houston—but not the last. The camera, a Hasselblad 500C, was a standard consumer unit that Schirra had stripped to bare metal and painted black in order to minimize reflections. Once in space, he documented the wonder and awe-inspiring beauty around him, and brought the images back for us to share. The Hasselblad 500C cameras were used on this and the last Project Mercury mission in 1963. They continued to be used throughout the Gemini space flights in 1965 and 1966.

Since then, a number of different camera models have been put to use, but the images taken with the boxy, black Hasselblads have remained true classics. Noted for the amazing sharpness of the photos, the Hasselblads stood up to the rigors of operating in space, facing from -65 °C to over 120 °C in the sun. Many shots have become historic treasures: the first spacewalk during the Gemini IV mission in 1965; the first venture to another celestial body during Apollo VIII, including the iconic “Earthrise” photograph; and the first landing on the surface of the Moon during Apollo XI. These pictures were published around the world, and have become some of the most recognizable and powerful photographs known.

Several different models of Hasselblad cameras have been taken into space, often modified in one way or another to ease use in cramped conditions and while wearing space suits, such as replacing the reflex mirror with an eye-level finder.

Victor Hasselblad AB, of Gothenburg, Sweden, has enjoyed a very long-lived collaboration with NASA. Working primarily with Johnson, the last four decades have seen a frequent exchange of ideas between Hasselblad and NASA via faxes, telephone calls, and meetings both in Sweden and the United States. Initially, most meetings were held at Hasselblad headquarters in Gothenburg, to be as close to the core activities as possible. Since then, collaboration with NASA has allowed what was once a very small company in international terms to achieve worldwide recognition. Hassleblad’s operations now include centers in Parsippany, New Jersey; and Redmond, Washington; as well as France and Denmark.

One direct development of this partnership, the 553ELS, is the space version of the 553ELX model, available commercially for years. This camera has adopted several key features and improvements, such as: the fixation of the mirror mechanism was removed from the rear plate to the side walls; aluminum plating replaced the standard black leatherette as the outer covering; the standard 5-pole contact was replaced by a special 7-pole contact equipped with a bayonet locking device; and the battery cover was equipped with a hinge. These changes resulted in increased durability and reliability, and the ELS model has seen frequent use in the shuttle program.

Hasselblad incorporated and refined other modifications by NASA technicians into new models, such as a 70mm magazine developed to meet Space Program needs. Camera modifications included new materials and lubricants to cope with the vacuum conditions outside the spacecraft, and often improved reliability and durability of the cameras. In addition, technicians modified camera electronics to meet NASA’s special demands for handling and function, reconstructing lenses and adding large tabs to the focusing and aperture rings to ease handling with the large gloves of an astronaut suit in zero gravity.

For over four decades, Hasselblad has supplied camera equipment to the NASA Space Program, and Hasselblad cameras still take on average between 1,500 and 2,000 photographs on each space shuttle mission. Just as the remarkable pictures on the surface of the Moon defined an era, the fine pictures of astronauts at work in and around the shuttles and International Space Station (ISS) have helped define the latest era of man’s continued exploration of the universe around us.

Likewise, the commercial line of Hasselblad cameras continues to incorporate lessons learned from these voyages. Consumer models have enjoyed such refinements as the revised fixation of the mirror mechanism—the Hasselblad 503CW still features the space-influenced improved mirror mechanism—a design change that gave far better stability for the mirror assembly, and an enlarged exposure button, similar to the one designed for the space models.

In October 2001, the Space Shuttle Discovery, in addition to transporting modules to the ISS, carried a new Hasselblad space camera: a focal-plane shutter camera based on the standard commercial version (203FE) equipped with data imprinting along the edge of the film frame, enabling the recording of time and picture number for each exposure. Since the computers onboard have full control over the position of the shuttle, identification of the exact location captured in a frame has become much easier.

Now that NASA is returning to the Moon and is also looking on to Mars for the next stage of exploration, it is without doubt that Hasselblad cameras will be along to document the voyages for those of us remaining on Earth. The relationship that began in a camera shop in Houston, blossomed on the Moon, and matured on the space shuttle, now prepares to reach new heights. As one more small step for a man and giant leap for mankind approaches, we anxiously await the photographs. 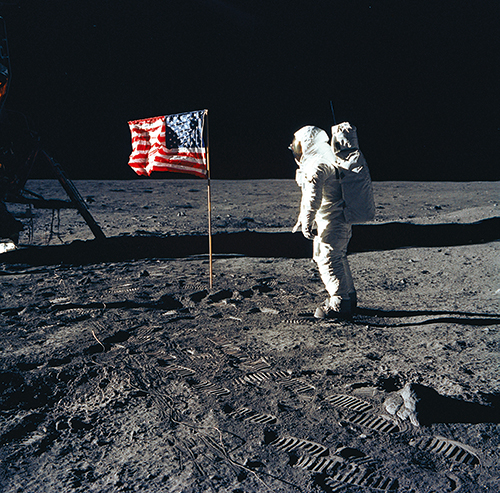 Astronaut Buzz Aldrin, lunar module pilot of the first lunar landing mission, poses for a photograph beside the United States flag. Astronaut Neil A. Armstrong took this picture with a 70-millimeter Hasselblad lunar surface camera, one of three Hasselblad cameras the mission carried to the Moon. 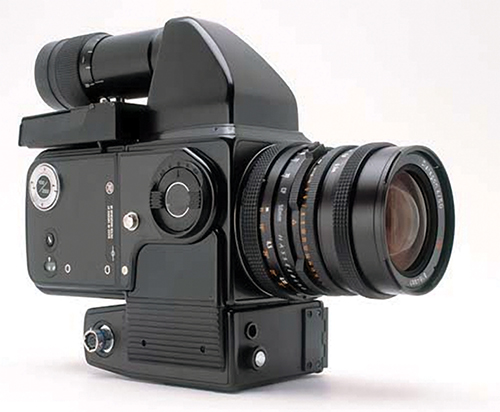 The ELS is a modified 553 ELX, with flash metering removed and leatherette replaced with thin metal plates. This camera was used in the early 1990s on the space shuttle missions. The film magazines use 70-millimeter perforated film and are equipped with electronic data imprinting, enabling the recording of time and picture number for each exposure. 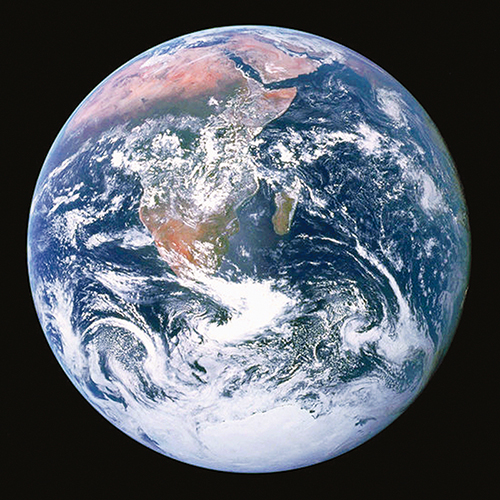 Earth resembles a child’s marble in this amazing photo, taken during the Apollo 17 mission. NASA officially credits the image to the entire crew, Eugene Cernan, Ronald Evans, and Jack Schmitt, all of whom took photographic images with the onboard Hasselblad. On February 7, 1984, astronaut Robert Gibson used a Hasselblad camera to take this picture of astronaut Bruce McCandless II, when he became the first person to fly untethered in space. McCandless traveled more than 300 feet from the Space Shuttle Challenger, 150 nautical miles above Earth. 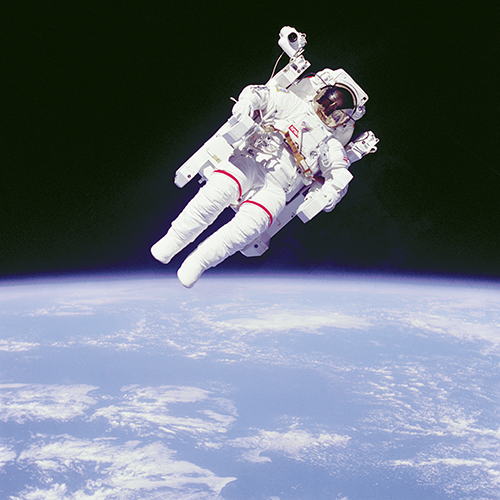 On February 7, 1984, astronaut Robert Gibson used a Hasselblad camera to take this picture of astronaut Bruce McCandless II, when he became the first person to fly untethered in space. McCandless traveled more than 300 feet from the Space Shuttle Challenger, 150 nautical miles above Earth.

Famous for its broadcast of greetings on Christmas Eve of 1968 as the crew circled the Moon, Apollo 8 was the first manned mission ever to reach escape velocity. This classic photo of Earth and the lunar surface was taken with a 270-millimeter lens on a Hasselblad camera, and has been heralded as one of the greatest photos of the 20th century by the likes of Time, Life, Sky and Telescope, and other magazines. While frequently printed with the Earth above the lunar surface, the orientation is original and reflects the view of the crew.