In addition to the mammoth engineering challenge posed by launching a cargo-laden craft into space for a long-distance mission, keeping the crews safe and healthy for these extended periods of time in space poses further challenges, problems for which NASA scientists are constantly seeking new answers. Obstacles include maintaining long-term food supplies, ensuring access to clean air and potable water, and developing efficient means of waste disposal—all with the constraints of being in a spacecraft thousands of miles from Earth, and getting farther every minute. NASA continues to overcome these hurdles, though, and is in the process of designing increasingly efficient life support systems to make life aboard the International Space Station sustainable for laboratory crews, and creating systems for use on future lunar laboratories and the upcoming long trip to Mars.

Years later, what began as an experiment with different methods of bioregenerative life support for extended-duration, human-crewed space flight, has evolved into one of the most widespread NASA spinoffs of all time.

In the 1980s, Baltimore-based Martin Marietta Corporation worked with NASA to test the use of certain strains of microalgae as a food supply, oxygen source, and a catalyst for waste disposal as part of the CELSS experiments. The plan was for the microalgae to become part of the life support system on long-duration flights, taking on a plethora of tasks with minimal space, energy, and maintenance requirements. During this research, the scientists discovered many things about the microalgae, realizing ultimately that its properties were valuable to people not only in space, but here on Earth, as a nutritional supplement. The scientists, fueled by these discoveries, spun off from Martin Marietta, and in 1985, formed Martek Biosciences Corporation, in Columbia, Maryland.

Now, after two decades of continued research on the same microalgae studied for use in long-duration space flight, Martek has developed into a major player in the nutrition field, with over 500 employees and annual revenue of more than $270 million. The reach of the company’s space-developed product, though, is what is most impressive. Martek’s main products, life’sDHA and life’sARA, both of which trace directly back to the original NASA CELSS work, can be found in over 90 percent of the infant formulas sold in the United States, and are added to the infant formulas sold in over 65 additional countries. With such widespread use, the company estimates that over 24 million babies worldwide have consumed its nutritional additives.

Why would so many people consume these products? The primary ingredient is one of the building blocks of health: A fatty acid found in human breast milk, known to improve brain function and visual development, which recent studies have indicated plays a significant role in heart health. It is only introduced to the body through dietary sources, so supplements containing it are in high demand.

The primary discovery Martek made while exploring properties of microalgae for use in long-duration space flights was identifying Crypthecodinium cohnii, a strain of algae that produces docosahexaenoc acid (DHA) naturally and in high quantities. Using the same principles, the company also patented a method for developing another fatty acid that plays a key role in infant health, arachidonic acid (ARA). This fatty acid, it extracts from the fungus Mortierella alpina.

DHA is an omega-3 fatty acid, naturally found in the body, which plays a key role in infant development and adult health. Most abundant in the brain, eyes, and heart, it is integral in learning ability, mental development, visual acuity, and in the prevention and management of cardiovascular disease.

Approximately 60 percent of the brain is composed of structural fat (the gray matter), of which nearly half is composed of DHA. As such, it is an essential building block for early brain development, as well as a key structural element in maintaining healthy brain functioning through all stages of life. It is especially important in infancy, though, when the most rapid brain growth occurs—the human brain nearly triples in size during the first year of life. Breast milk, which is generally two-thirds fat, is a chief source for DHA for children, both a testament to the body’s need for this substance and an argument for sustainable sources that can be added to infant formula. Studies have shown that adults, too, need DHA for healthy brain functioning, and that the important chemical is delivered through the diet.

DHA is also a key component in the structural fat that makes up the eye, and is vital for visual development and ocular health. The retina, for example, contains a high concentration of DHA, which the body forms from nutritious fats in the diet. With heart tissue, the U.S. Food and Drug Administration has found supporting evidence that DHA consumption may reduce the risk of coronary heart disease.

This important compound, previously only found in human breast milk, and with undeniable nutritional value, is now available throughout the world. It is one example of how NASA research intended to sustain life in space has found its way back to Earth, where it is improving the lives of people everywhere.

Silk®, Horizon Organic®, and Rachel’s® are registered trademarks of the WhiteWave Foods Company.

Abstract
NASA's Controlled Ecological Life Support Systems program attempted to address basic needs of crews, meet stringent payload and power usage restrictions, and minimize space occupancy, by developing living, regenerative ecosystems that would take care of themselves and their inhabitants. An experiment from this program evolved into one of the most widespread NASA spinoffs of all time-a method for manufacturing an algae-based food supplement that provides the nutrients previously only available in breast milk. Martek Biosciences Corporation, in Columbia, Maryland, now manufactures this supplement, and it can be found in over 90 percent of the infant formulas sold in the United States, as well as those sold in over 65 other countries. With such widespread use, the company estimates that over 24 million babies worldwide have consumed its nutritional additives. 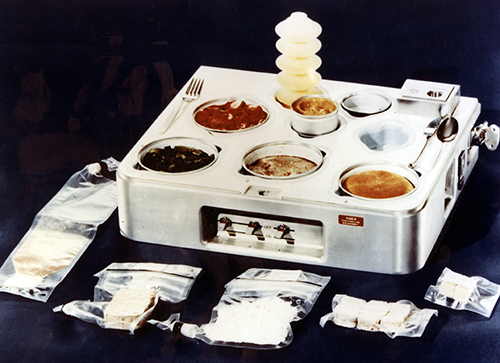 Shown here is the Skylab food heating and serving tray with food, drink, and utensils. While this represented a great improvement over the food served on earlier space flights, NASA researchers still had plenty of room for progress.

NASA experiments into plant growth for long-duration space flights led to the identification and manufacturing method for a nutritional supplement now found in everyday foods.