Among NASA’s research goals is increased understanding of factors affecting plant growth, including the effects of microgravity. Impeding such studies, traditional light sources used to grow plants on Earth are difficult to adapt to space flight, as they require considerable amounts of power and produce relatively large amounts of heat. As such, an optimized experimental system requires much less energy and reduces temperature variance without negatively affecting plant growth results.

Ronald W. Ignatius, founder and chairman of the board at Quantum Devices Inc. (QDI), of Barneveld, Wisconsin, proposed using light-emitting diodes (LEDs) as the photon source for plant growth experiments in space. This proposition was made at a meeting held by the Wisconsin Center for Space Automation and Robotics, a NASA-sponsored research center that facilitates the commercialization of robotics, automation, and other advanced technologies. The Wisconsin group teamed with QDI to determine whether an LED system could provide the necessary wavelengths and intensities for photosynthesis, and the resultant system proved successful. The center then produced the Astroculture3, a plant growth chamber that successfully incorporated this LED light source, which has now flown on several space shuttle missions.

NASA subsequently identified another need that could be addressed with the use of LEDs: astronaut health. A central concern in astronaut health is maintaining healthy growth of cells, including preventing bone and muscle loss and boosting the body’s ability to heal wounds—all adversely affected by prolonged weightlessness. Thus, having determined that LEDs can be used to grow plants in space, NASA decided to investigate whether LEDs might be used for photobiomodulation therapy (PBMT).

PBMT is an emerging medical and veterinary technique in which exposure to high-intensity, wavelength-specific light can stimulate or inhibit cellular function. PBMT modulates a body’s organelles—structures within a cell (e.g., mitochondria, vacuoles, and chloroplasts) that store food, discharge waste, produce energy, or perform other functions analogous to the role of organs in the body as a whole—with wavelength-specific photon energy to increase respiratory metabolism, reduce the natural inflammatory response, accelerate recovery of injury or stress at the cellular level, and increase circulation.

A NASA Small Business Innovation Research (SBIR) contract was granted to QDI to develop an LED light source for use in a surgical environment as the photon source for its proprietary Photodynamic Therapy (PDT) treatment. An emerging cancer treatment, PDT requires high-intensity, monochromatic light to turn on the cancer-killing properties of a drug, allowing physicians to activate a drug in the tumor only.

QDI and Dr. Harry T. Whelan of the Medical College of Wisconsin (known for groundbreaking research in PBMT) based their work on QDI’s High Emissivity Aluminiferous Light-emitting Substrate (HEALS) technology, which was developed for use in the plant growth experiments in 1993. Several SBIR contracts from NASA’s Marshall Space Flight Center between 1995 and 1998 helped QDI continue the evolution of HEALS in collaboration with Whelan, and the technology was successfully applied in cases of pediatric brain tumors and the prevention of oral mucositis in pediatric bone marrow transplant patients.

Since HEALS and WARP 10 were originally profiled in Spinoff 2005, a flurry of activity has seen this unique technology showered in awards and the next-generation LED device gain FDA clearance and enter the market.

The HEALS and WARP 10 technologies have accrued an impressive résumé; the list of accolades received includes induction into the Space Technology Hall of Fame in 2000; being named a Marshall Space Flight Center “Hallmark of Success” as an outstanding commercialization of an SBIR-developed technology in 2004; and winning first place in the Wisconsin “Governor’s New Product Awards” in 2005 for the development of WARP 10. The greatest and most recent accolade came in 2006, when QDI was nominated for and received a “Tibbetts Award.”

Named for Roland Tibbetts, the acknowledged “father of the SBIR program,” it is an annual government-wide award for small firms, projects, organizations, and individuals judged to exemplify the very best in SBIR achievement. These prestigious national awards emphasize recognizing those accomplishments where, in the judgment of those closely involved and often most immediately affected, the stimulus of SBIR funding has made an important and definable difference. Economic impact of technological innovation, business achievement, effective collaborations, demonstrated state and regional impact, and proven support are the main considerations.

On the heels of this honor, 2007 saw FDA clearance for the new WARP 75 device, the latest iteration of the technology that began with the HEALS technology. The WARP 75 improves on the WARP 10 design, boasting 7.5 times the actual coverage area of the WARP 10 (75cm2 versus 10cm2), an automatic timed cycle of 88 seconds with an audible alarm, AC power, the ability to be mounted on an articulated arm, and fan cooling. System controls are located on the top panel for easy light dose delivery, and the device is placed directly against the skin where treatment is desired. The unit can be operated with one hand and remains cool to the touch during operation.

The WARP 75 continues the legacy of its predecessors in clinical trials with the Medical College of Wisconsin and the University of Alabama at Birmingham for the amelioration of oral mucositis pain in bone marrow transplant patients. QDI is exploring other medical applications of the HEALS-based technology, including combating the symptoms of bone atrophy, multiple sclerosis, diabetic complications, Parkinson’s disease, and a variety of ocular applications. Most recently, Marshall awarded QDI another grant to study synergistic wound healing and conduct a PDT study with silver nanoclusters. Through all of their work, QDI remains dedicated to the principle that light provides the power for all life on Earth, and the belief that the quality, delivery, and control of light is essential to the wellness of the human race and our advancement into the future.

HEALS®, WARP 10®, and WARP 75® are registered trademarks, and Photodynamic Therapy™ is a trademark of Quantum Devices Inc.

Abstract
Quantum Devices Inc., of Barneveld, Wisconsin, was granted a NASA SBIR contract to develop an LED light source for use in a surgical environment. Several SBIR contracts from Marshall Space Flight Center helped develop the High Emissivity Aluminiferous Light-emitting Substrate (HEALS), then successfully applied in cases of pediatric brain tumors and the prevention of oral mucositis in pediatric bone marrow transplant patients. The HEALS and subsequent WARP 10 technologies have won many awards, including a Tibbets Award." Recently, the next-generation device the WARP 75. 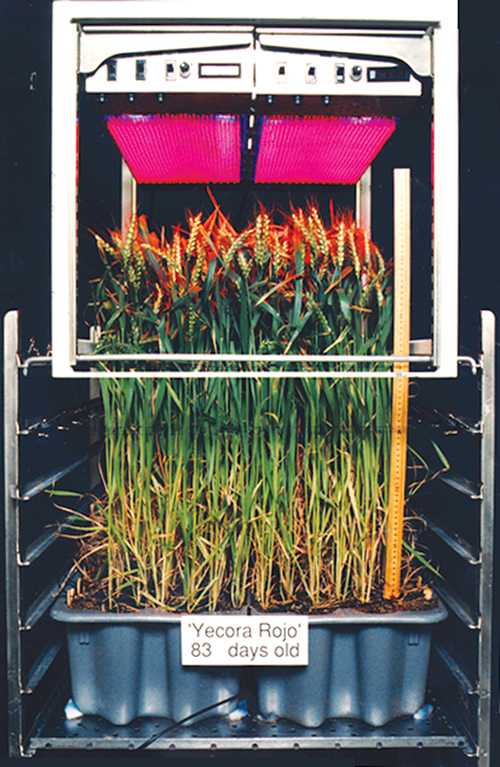 Studies have shown red LEDs are a viable light source for growing plants in space flight due to their small mass and volume, wavelength specificity, longevity, and safe operation. 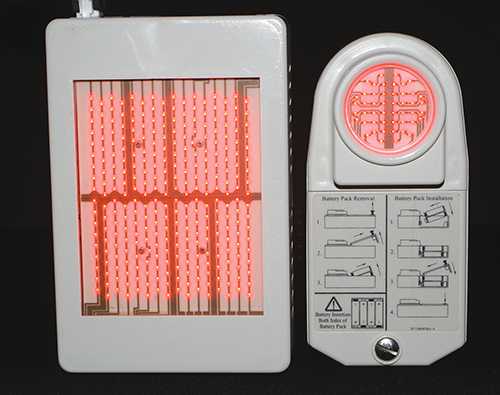 The WARP 75 (left) has 7.5 times more coverage area than the previously developed WARP 10 (right). The FDA has cleared the WARP 75 for the treatment of chronic pain, including the temporary relief of minor muscle and joint pain, arthritis, muscle spasms, and stiffness, by promoting relaxation of muscle tissue and temporarily increasing local blood circulation.