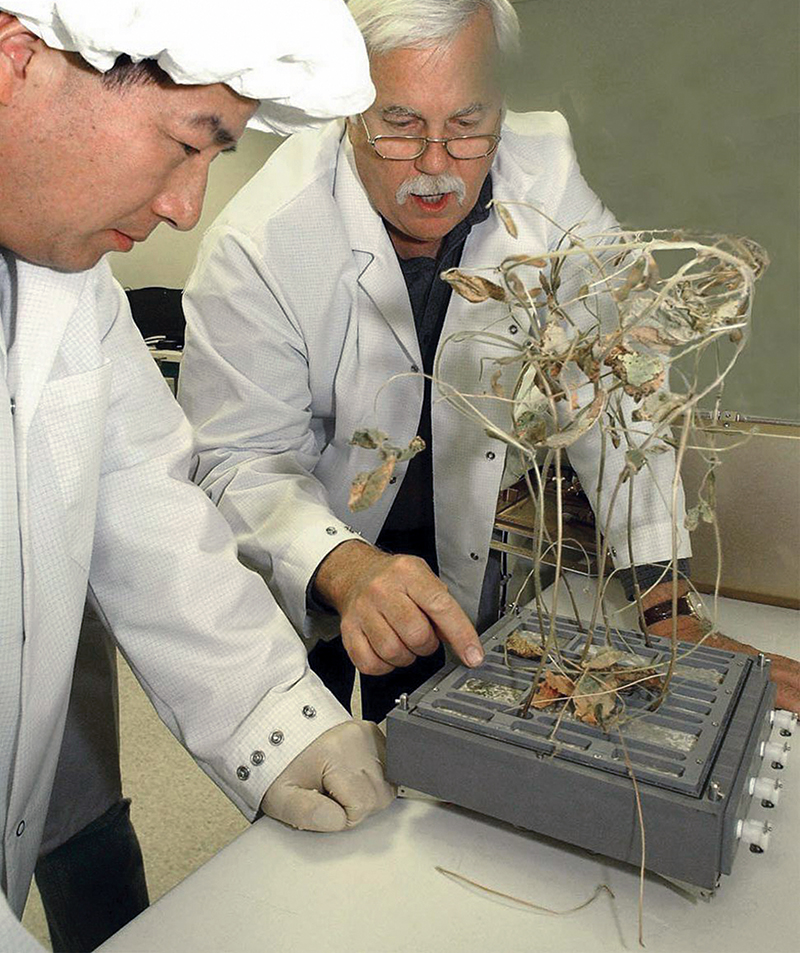 In order for NASA astronauts to explore the solar system, they will need to travel not just as pioneers but as settlers, learning to live off the land. Current mission needs have NASA scientists exploring ways to extract oxygen from the lunar soil and potable water from human wastes. One of the basic goals, however, will be for pioneering space travelers to learn to grow and manage their own crops. This requires the development of space-age greenhouses where astronaut farmers can experiment with harvesting large-scale food crops.

In the 1990s, researchers at the Wisconsin Center for Space Automation and Robotics, a NASA research partnership center at the University of Wisconsin in Madison, sponsored by Marshall Space Flight Center’s Space Product Development program, produced an ethylene reduction device for a plant growth unit. Ethylene is a naturally occurring, odorless, colorless gas given off by plants that hastens the ripening of fruits and the aging of flowers, encouraging decay. Comprised of carbon and hydrogen, in closed growing environments, like on a spacecraft or in a terrestrial greenhouse, ethylene builds up quickly and plants mature too fast. Removing ethylene, therefore, is important to preserving crops not just in space, but also on Earth, where grocers and florists have an interest in reducing the gas that ultimately shortens the shelf life of their products.

The ethylene reduction device, also called the ethylene “scrubber,” draws air through tubes coated in thin layers of titanium dioxide (TiO2). The insides of the tubes are exposed to ultraviolet light, which creates a simple chemical reaction, converting the ethylene (C22H4) into trace amounts of water (H2O) and carbon dioxide (CO2), both of which are actually good for plants.

The ethylene scrubber first launched aboard Space Shuttle Columbia mission STS-73 in 1995, where onboard the spacecraft the device was used successfully to preserve a crop of potato seedlings. Subsequent evolutions of the technology were flown aboard numerous International Space Station (ISS) expeditions.

KES Science & Technology Inc., a Kennesaw, Georgia-based company specializing in sustaining perishable foods, licensed the ethylene scrubbing technology from the University of Wisconsin (Spinoff 2001 and 2002). KES partnered with Akida Holdings, of Jacksonville, Florida, which now markets the NASA-developed technology as AiroCide. According to the company, it is the only air purifier that completely destroys airborne bacteria, mold, fungi, mycotoxins, viruses, volatile organic compounds (like ethylene), and odors. What’s more, the device has no filters that need changing and produce no harmful byproducts, such as the ozone created by some filtration systems.

Now in widespread use, the device is still helping preserve fresh foods, but has also seen applications in the medical and dental fields as well as in killing airborne pathogens, including anthrax and dust mites. One of the most recent applications of this NASA technology now available is in a new line ofrefrigerators. Other companies have begun looking at using the device for treating whole house systems.

KES and Akida categorize the AiroCide customer-base into three distinct fields: food preservation, health care, and private spaces. As Marc Anderson of the University of Wisconsin explains, “One of the great uses of this device is for removing ethylene, but it really cleans any organic material from the air, including odors, bacteria, volatile organic compounds of all sorts, and will even remove inorganics, like sulfur compounds.”

Food preservation customers include supermarkets like Whole Foods; produce distribution facilities like those operated by Del Monte; food processing plants; wineries; distilleries; restaurants; and large floral shops. Reeves Floral, an AiroCide user, reported 92-percent reductions in airborne mold and a 58-percent drop in airborne bacteria levels in just the first 24 hours it had the units operating in its floral storage warehouse. The AiroCide units can be used in walk-in coolers to preserve freshness of produce during storage and transport, to increase safety in food preparation areas, to kill bacterial contaminants in flowers (botrytis), and to protect against spoilage and contaminants.

AiroCide has seen new consumer applications in food preservation. The technology is now incorporated into a line of refrigerators, high-end consumer models that preserve freshness and reduce food waste. The refrigerator recycles the air every 20 minutes, reducing odors, viruses, and bacteria, as well as eliminating the presence of veggie-wilting ethylene.

The same technology has also seen use in remote regions of the world, where harsh environments and underdeveloped infrastructure complicate food storage and distribution. AiroCide units have currently been deployed to India and the Gulf Cooperation Council, which includes the countries of Bahrain, Kuwait, Quatar, Oman, Saudi Arabia, and the United Arab Emirates. In these areas, where refrigerated trucks carry groceries from rural farmland to towns miles away, the AiroCide unit preserves freshness and prevents food spoilage. The units are also found in food storage facilities, preventing mold growth and the spread of disease.

In the health care arena, AiroCide units have been incorporated into doctors’ clinics and operating rooms, as well as in waiting areas, an oft overlooked location rife with germs and bacteria like respiratory influenza or mycobacterium tuberculosis and frequented by people with compromised immune systems. Operating rooms are similarly prone to germ and bacteria infiltration. The rooms are cleaned and sanitized initially, but the incoming doctors, equipment, and even the patients contaminate the air. With AiroCide units mounted in the ceiling, an operating room becomes safer for all inhabitants, as harmful bacteria like methicillin-resistant Staphylococcus aureus (MRSA) and vancomycin-resistant Enterococcus, and the fungi Penicillium and Aspergillus are removed from the air. In addition to eliminating virtually all known airborne germs and diseases, the technology reduces the burden on high-efficiency particulate air (HEPA) filters and laminar flow environments. These same air-cleaning properties have also been applied to neonatal wards.

In addition to preserving produce and maintaining healthy air in medical settings, the AiroCide units have been adapted for use in everyday living environments. In hotels, for example, the units eliminate mold, mildew, germs, and unwanted odors. These same features are also useful in offices, where illnesses caused by airborne organisms can lower productivity. In homes, the AiroCide units help eliminate the growth of mold and fungi as well as eliminate allergens like pet dander and dust mites.

AiroCide® is a registered trademark of KesAir Technologies LLC.

Abstract
NASA-funded researchers produced an ethylene reduction device for a plant growth unit. KES Science and Technology Inc., a Kennesaw, Georgia-based company specializing in sustaining perishable foods, licensed the ethylene scrubbing technology. KES partnered with Akida Holdings, of Jacksonville, Florida, which now markets the NASA-developed technology as AiroCide. According to the company, it is the only air purifier that completely destroys airborne bacteria, mold, fungi, mycotoxins, viruses, volatile organic compounds (like ethylene), and odors. What's more, the devices have no filters that need changing and produce no harmful byproducts, such as the ozone created by some filtration systems 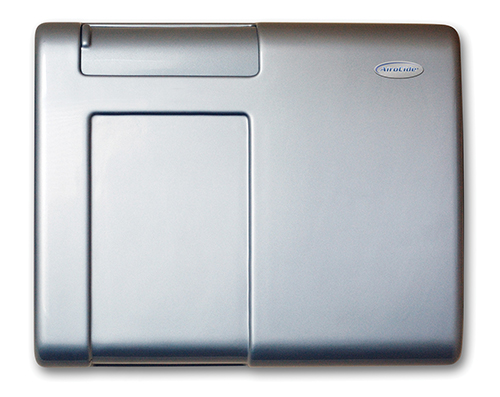 Now in widespread use, the ethylene-removal technology developed for the ISS is still helping preserve fresh foods and has also seen applications in the medical and dental fields, as well as in killing airborne pathogens, including anthrax and dust mites.

Dr. Weijia Zhou (left), director of the Wisconsin Center for Space Automation and Robotics at the University of Wisconsin-Madison, inspects soybeans grown in the plant growth unit aboard the International Space Station (ISS). Coating technology used inside the miniature plant greenhouse removes ethylene, a chemical produced by plant leaves that can cause plants to mature too quickly.