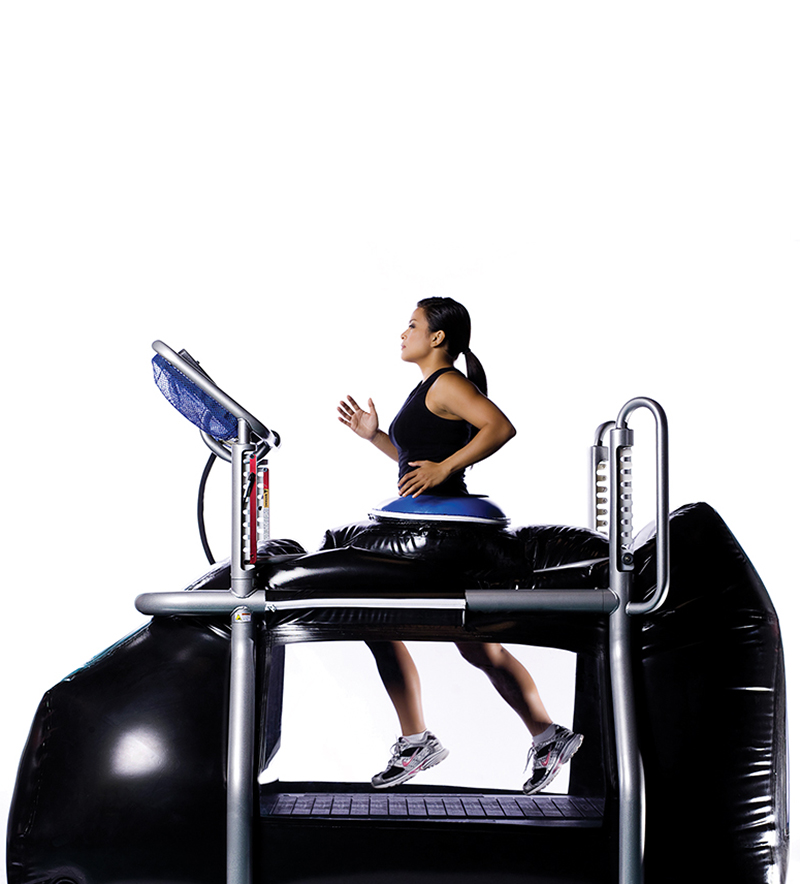 On Earth, gravity can cause a lot of stress to a person’s bones and muscles, whether the stress is caused by running a marathon or simply climbing a staircase. However, in space, the lack of gravity can also cause problems for astronauts’ bodies. NASA is seeking ways to combat these problems, and the solutions are finding application here on Earth.

While he was studying the biomechanics of exercise, Ames Research Center scientist Robert Whalen proposed using differential air pressure in space to mimic the Earth’s gravity to prevent bone loss and muscle deterioration. As a National Research Council post-doctoral Fellow at Ames from 1988 to 1989, Whalen helped develop effective exercise regimens for NASA’s astronauts, and when Whalen’s fellowship ended, NASA hired Whalen to a full-time research position.

In his research, Whalen developed the hypothesis that musculoskeletal maintenance in space requires Earth-equivalent functional loading (or weighting), which is loading bones and muscles with activities and force levels in space similar to daily activity on Earth. In space, most bone loss and muscle atrophy occur in the lower body. Whalen explains, “On Earth, our most significant musculoskeletal loading—particularly of the lower body—occurs during normal upright activities, such as standing, walking, and stepping off a curb.” These various activities impart different levels of musculoskeletal loading, which keep our leg muscles able to support our weight.

Astronauts do not have these types of functional activities in space and must replace them with treadmill exercise using a loading harness to hold the astronaut in place on the treadmill. However, the treadmill loading harness is uncomfortable and prevents astronauts from exercising normally and with the same intensity as on Earth. Whalen suggested using air pressure as an effective way of applying a high force, equal to body weight, to astronauts during treadmill exercise to replace the harness system.

After patenting his gravity differential technology in 1992, Whalen licensed his patent in 2005 to a private company to help rehabilitate patients needing support as they learned (or re-learned) to stand, walk, and run. Based in Menlo Park, California, Alter-G Inc. adapted the technology for athletic and medical uses here on Earth in the form of a specialized treadmill called the G-Trainer. This rehabilitation device applies air pressure to a patient’s lower body in order to unload weight, which reduces the stress placed on the lower body during rehabilitation.

Whalen explains the G-Trainer evolved directly from his original idea of using air pressure for the opposite effect—to add weight to an astronaut’s body during treadmill exercise in the low gravity of space. A variety of patients—whether suffering from brain injury, neurological disorders, athletic injuries, or other stresses on the joints such as arthritis or morbid obesity—now use the NASA-derived technology in physical therapy.

Lars Barfod, Alter-G’s president and CEO, says that rehabilitation clinics are a major market for the G-Trainer, and he notes that the G-Trainer has been a successful option in military hospitals for orthopedic and neurological uses, including helping patients rehabilitate after traumatic brain injury to transition from ambulatory assistive devices to independent movement. Someone who is recovering from a brain injury can re-learn proper balance and gait while getting as much physical support from the G-Trainer as needed.

Whatever the cause of an injury, rehabilitation can be painful, and patients often alter their gait, stride length, or body position to over-compensate for the pain. The G-Trainer reduces the effect of gravity and weight, which makes it more comfortable for a patient to focus on a normal, correct gait instead of worrying about more injury and pain. This allows patients to develop good habits and condition their muscles while their bodies are still healing. The G-Trainer is comfortable like water training, but offers more realistic support of the lower limbs in their free-swing phase, allowing the legs to swing more normally than they would in water. Precision is another advantage the G-Trainer offers over water rehabilitation.

The ability to change the amount of patient support precisely and incrementally is a major advantage the G-Trainer offers over other rehabilitation devices and methods, such as harness systems and water training. Like an ordinary treadmill, the G-Trainer stores information and allows for incremental adjustments to the workout, such as increasing incline or speed. It also allows for incremental adjustment to the air pressure, which controls the amount of weight lifted from the patient. Depending on what users specify, the air pressure system can reduce body weight in 1-percent increments—useful to fine-tune treatment with improvement—to as much as an 80-percent reduction, for instance, for a patient who weighs 160 pounds but can only support 32 pounds of weight.

The comfort of the G-Trainer is an improvement over harness systems, Barfod explains, because the support remains constant, even when the system is supporting a high percentage of weight or a patient weighing several hundred pounds. Conversely, harness systems chafe and can become uncomfortable quickly, especially if a patient is obese or needs a larger percentage of weight lifted. In a harness system, there is typically no reliable, precise method to change or record the amount of weight on a weak or injured limb and no digital readout to keep patient and trainer informed.

In order for the G-Trainer to control air pressure effectively, users first have to don specifically designed shorts, which attach to a waist-level enclosure. This enclosure—in essence a large airtight bag that surrounds the patient’s lower body and the running platform—attaches to the treadmill system. After the patient’s lower body is sealed in the enclosure, the system performs a calibration, adjusting to the person’s size and weight. Then, the patient chooses a running speed, incline amount, and decides what percent weight should be removed. If a patient desires more unloading—more weightlessness—a button is simply pressed on a touch screen, and the air pressure increases, lifting the body, reducing strain, and further minimizing impact on the legs.

After the U.S. Food and Drug Administration (FDA) cleared the G-Trainer for medical use in January 2008, studies at major hospitals and universities began to assess G-Trainer’s effectiveness for patients with cardiovascular complications, lower-limb arthritis, ankle fractures, and mobility issues associated with Parkinson’s disease. Alter-G is also considering developing the G-Trainer for other patients, including children with cerebral palsy or other disorders that interfere with the ability to walk.

Meanwhile, the company is working hard on making the product more affordable. “By doing that, we think the G-Trainer will become a standard of care in rehabilitation,” Barfod says.

G-Trainer™ is a trademark of Alter-G Inc.

Abstract
A former Ames Research Center engineer, Dr. Robert Whalen, invented a treadmill that he licensed to a Menlo Park, California company, Alter-G Inc. The company's G-Trainer is an enclosed treadmill that uses air pressure to help patients feel up to 80-percent lighter, easing discomfort during rehabilitation. A patient desiring more weightlessness during a workout can simply press a button and the air pressure increases, lifting the body and reducing strain and impact. The U.S. Food and Drug Administration cleared the G-Trainer for medical use in January 2008, and researchers are now assessing the G-Trainer's effectiveness in aiding patients with various neurological or musculoskeletal conditions. 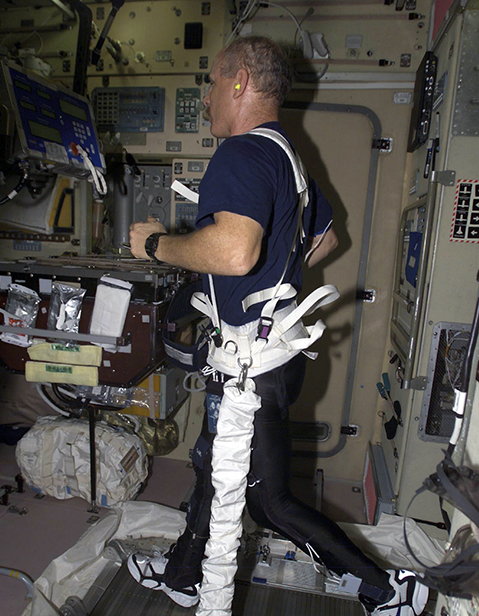 In space, in order to prevent bone loss and muscle atrophy, astronauts exercise on treadmills equipped with a loading harness.

After the patient’s lower body is sealed in an airtight enclosure, the system performs a calibration, adjusting to the person’s size and weight. If a patient desires more unloading—more weightlessness—a button is simply pressed on a touch screen, and the air pressure increases, lifting the body, reducing strain, and further minimizing impact on the legs.