For astronauts returning to Earth, adjusting to full gravity can be just as demanding as any of the challenges they faced in space. While readjusting to Earth’s gravitational pull, astronauts can experience difficulties moving and balancing, headaches, nausea, and even fainting spells.

While the exact reasons for this latter effect are still unknown, the tendency for astronauts to experience orthostatic intolerance—dizziness, lightheadedness, and fainting among other symptoms—arises from the effects of microgravity on the body’s circulatory and balance systems. On Earth, gravity pulls the body’s blood and other fluids toward the feet, creating higher blood pressure in the feet than in the brain or around the heart. In space, however, the lack of gravity results in greater than normal amounts of fluid shifting to the upper body and head. One outcome is that the body mistakenly thinks there are excess fluids that need eliminating; as a result, astronaut blood plasma levels can decrease by about 12 percent in space, and their total body water drops 2–3 percent. (Under normal conditions, about two-thirds of the body’s water is contained inside cells, while the rest is found outside of cells; much of this latter amount is blood plasma.) Astronauts thus return to Earth in a state of dehydration and low blood volume—one possible factor leading to the orthostatic intolerance that troubles as many as 80 percent of astronauts following long-term space missions.

To help address this concern, astronauts traditionally tried to rehydrate before and after landing by taking salt tablets with water. (Sodium helps regulate extracellular fluid volume.) This method, though, proved inconvenient and unpleasant for the astronauts, as well as impractical in space where water supplies are limited. The high levels of sodium in the tablets could even lead to greater dehydration if not managed carefully.

After years of extensive Agency research and testing, Ames Research Center physiologist Dr. John Greenleaf developed and patented a better alternative: an electrolyte concentrate composed of a specific ratio of sodium chloride and sodium citrate. The isotonic formula, containing optimal proportions of water and salts for absorption into the body, provides for fast, easy, and effective rehydration in amounts practical for use in space. Astronauts currently use the patented formula on missions.

“We developed this product to perform optimally under the most extreme conditions. The health of our highly trained astronauts was paramount,” says Greenleaf, now retired from NASA. “With all that Americans and the Government have invested in the Space Program and our astronauts, this is one clear way to protect and maximize that investment.” The value of Greenleaf’s electrolyte formula is not limited to countering the effects of microgravity, however. Thanks to a NASA partnership, he says, the public will now benefit from this research.

In early 2009, Boulder, Colorado-based Wellness Brands Inc. exclusively licensed the concentrated electrolyte formula from Ames. David Belaga, the company’s president and CEO with more than 15 years of experience in licensing and technology transfer, built the startup Wellness Brands around the NASA innovation after discovering the licensing opportunity while researching the Agency’s patent databases. The electrolyte formula fit Belaga’s interest in a NASA technology with consumer market applications, and his familiarity with the endurance athletes attracted to Colorado’s high-altitude conditions for training made the partnership an “immediately intriguing opportunity.”

“As is typical, NASA put their scientists on developing a superior technology, in this case to relieve and prevent the ravages of dehydration,” Belaga says. “NASA spent about 15 years working through various combinations to get to the optimal formula.”

That formula is now available to the public as the liquid electrolyte concentrate called The Right Stuff. Packaged in single-serving, 16.5 milliliter recyclable plastic vials, the Wellness Brands concentrate contains the original sodium chloride and sodium citrate blend, along with a small amount of sucralose sweetener and citric acid to counter the saltiness of the electrolytes. Available in citrus blend, wild berry, or unflavored varieties, The Right Stuff is added to water or any training beverage to significantly enhance rehydration.

The effectiveness of The Right Stuff is backed by extensive NASA testing, says Belaga. “Every human has receptors throughout the body, both intracellular and extracellular, that ensure the balance of hydration in the body,” he explains. Whether you are an astronaut returning to Earth, an Olympian, or in training for your first marathon, human physiology and its needs and challenges remain the same, he says. Dehydration can cause tiredness, headaches, muscle cramps, decreased blood pressure, dizziness, and fainting. Severe dehydration can lead to delirium, unconsciousness, and even death. Athletes training for long periods or in hot conditions must constantly resupply the water they lose through sweating and breathing, and Belaga notes that rigorous NASA testing has shown that the electrolyte formula of The Right Stuff is ideal for meeting this need.

“NASA scientists compared this formula to water, to carbohydrate-based sports drinks, to hybrid drinks with extra sugars and glycogens, and this product beat them all,” Belaga says. The researchers determined that the quantities of carbohydrates found in most common sports drinks may actually impede the body’s ability to absorb the rehydrating electrolytes. The Right Stuff contains no carbohydrates, caffeine, or sugar, and Belaga cites one study that demonstrated the product not only effectively rehydrated users, but it also led to a 20-percent increase in endurance.

Wellness Brands is in discussions with college and professional sports teams and will start stocking specialty sporting goods retailers with The Right Stuff this year. The company is targeting elite athletes and endurance sport enthusiasts as its initial consumers, but notes that its NASA-developed formula is the “right stuff” for everyone.

Not only athletes will benefit from the electrolyte formula. Under the exclusive NASA license, Wellness Brands plans to expand with other products for situations when proper hydration is critical. Dehydration, for example, is a problem for airline passengers on long-distance flights during which water is lost in the dry air of the pressurized airplane cabins. Dehydration is also a factor in jet lag and altitude sickness, and can be a deadly outcome of various diseases that cause diarrhea and vomiting, such as cholera, and conditions like heat stroke.

The formula’s NASA origins position The Right Stuff to make an immediate market impact and start providing its benefits to the public, says Belaga.

“It’s a great asset to have this technology come out of NASA,” he says. “Its credibility with the American populace is almost incalculable.”

The Right Stuff™ is a trademark of Wellness Brands Inc. 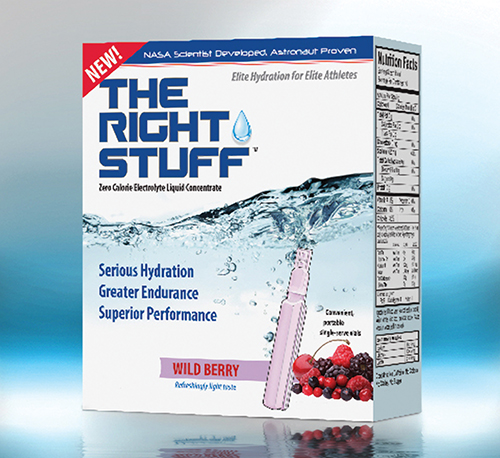 A NASA-developed and tested electrolyte concentrate formula, The Right Stuff has been demonstrated to boost athlete endurance.

Vigorous exercise while in space is one measure astronauts can take, along with hydration efforts, to help mitigate difficulties adjusting to Earth’s gravity upon return from long-term missions.