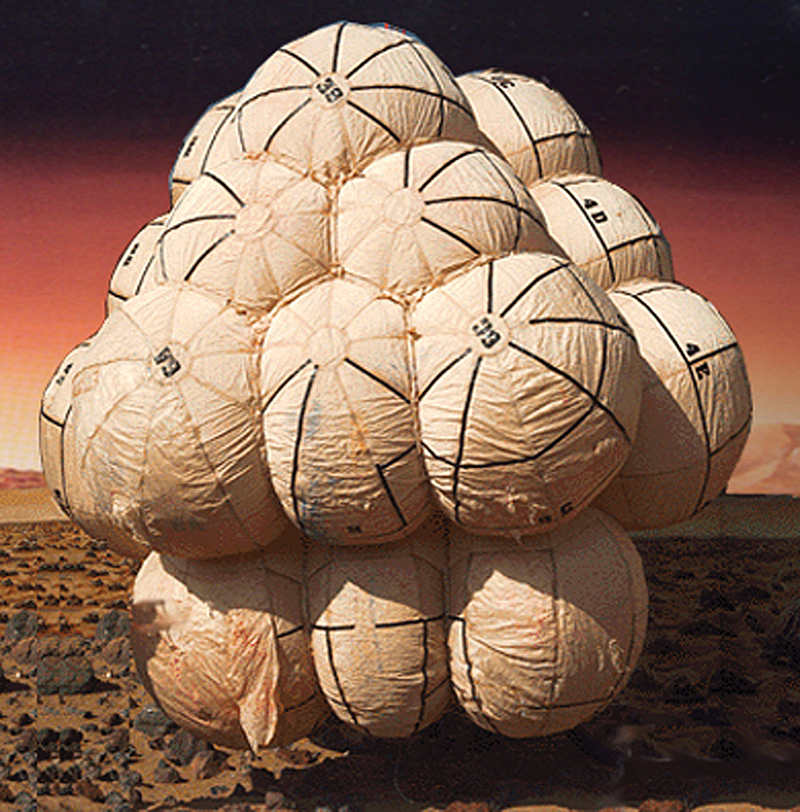 Special textiles have been mission-critical components for successful space missions since the early years of NASA’s first parachutes and space suits in the late 1950s. One of the Agency’s more recognizable uses for textiles, the Mars Pathfinder airbags, provided a cushioned, instrument-friendly landing in 1997. This same technology also successfully protected the Mars Exploration Rovers when they landed on the Red Planet in 2004.

These were not the ordinary airbags found in automobiles. Because the success of the missions depended on the payloads remaining undamaged, NASA had specific, exacting requirements for the airbag design. A lightweight fabric that could maintain inflation was required, but that fabric would have to be tough enough to withstand extreme temperatures (both in space and in the Martian atmosphere). The fabric balloons would have to inflate after passing through the atmosphere and then maintain inflation during impact on the rocky, sharp, and unpredictable Martian terrain. In July 1997, when the Mars Pathfinder landed on Mars, 24 interconnected, inflated spheres protected the vehicle and its delicate payload as the craft bounced 15 times after an initial impact speed of 18 meters per second (40 mph).

In order to create Pathfinder’s mission-critical airbags, NASA’s Jet Propulsion Laboratory (JPL) collaborated with Frederica, Delaware’s ILC Dover, which solicited a bid from New Ipswich, New Hampshire’s Warwick Mills Inc. to weave the textiles. Founded in 1888, Warwick Mills has a long history in weaving textiles and a long history with NASA as well, having woven fabrics for reentry parachutes and the Apollo recovery floats in the 1960s. The company began developing high-performance flexible composites in 1991 in order to address needs in the military, industrial, marine, and aerospace markets.

According to John Cronin, one of Warwick’s public safety equipment program managers, the company was one of the first weavers of Vectran, a liquid-crystal polyester fiber noted for its strength as well as its resistance to impact and abrasion. After receiving a request from JPL to weave a lightweight and yet strong fabric for the Mars airbags, Warwick, in collaboration with the engineering team at ILC Dover, decided to use a blend of coated Vectran fibers, due to Vectran’s strength and reliability in cold temperatures. Warwick’s team also engineered a process to apply thin coatings to the woven Vectran, which added strength while remaining lightweight.

After Warwick wove the fabric, the completed airbag prototypes first underwent tests at ILC Dover and then at Glenn Research Center’s Plum Brook Station Space Power Facility in a simulated Martian atmosphere. According to Chuck Sandy, chief engineer at ILC Dover, “Warwick provided valuable insight to the team as a number of iterations of candidate materials (different weaves, weights, and layup combinations) were fabricated and subjected to customized rock impingement testing at ILC.” During this testing, the JPL team discovered that the most effective design would incorporate multiple layers (up to four, depending on the location of the airbag) of lightweight fabric. The outer layers could tear and absorb more energy from impact while protecting the inner layers.

Charlie Howland, Warwick’s chief engineer and CEO, explains that the collaborative design and testing with NASA and ILC Dover yielded several benefits for Warwick, including new enthusiasm for design possibilities. “What this project provided for us was this innovative spark,” he says. “This was able to really get our engineering staff excited and looking at high-performance fibers that were emerging.” In addition, the company also learned new techniques for improving the fiber’s tear resistance and refining test methods.

Warwick also benefited enormously from learning how to weave textiles in new ways and incorporate coatings. “What makes Warwick Mills unique,” Howland says, “is our patented weaving and finishing technique, which we developed for the Mars airbags.”

From the late 1800s until the early 1990s, Warwick’s core business was weaving textiles. Today, however, the company is known primarily as an engineering firm with a range of manufacturing capabilities. In its TurtleSkin line, Warwick Mills offers protective apparel and safety products, using similar weaving techniques the company used in developing the Mars airbags and applying different composites and laminates to fabric. “From the knowledge and engineering experience we gained while working on the airbags,” Cronin says, “we were able to develop high-performance protective products for public safety.”

Many of the company’s products are based on the company’s uniquely tight weaving technique, Cronin says. “We have made a series of modifications to high-speed rapier looms to control warp yarn tension and support extremely high weaving forces.” The result, Howland adds, is that the fabric has the tightest weave possible. To penetrate TurtleSkin fabrics, sharp objects must actually break the fibers, rather than simply push them to the side. Howland notes that in protective applications, this allows the creation of significantly lighter and more flexible fabric than had previously been possible.

The TurtleSkin products offer resistance from a variety of forces, and include ballistic-resistant body armor, stab-resistant body armor, and puncture-resistant clothing. According to Cronin, the body armor uses a tightly woven blend of Vectran, Dyneema, and Twaron to protect the wearer from knife injuries (in stab armor and cell extraction vests) and blunt impact and firearms (in the SoftPlate body armor). Cronin explains that the tight weave in the stab- and spike-resistant fabrics is the critical element for protection from various weapons: “When you stitch a button on your shirt, you don’t actually make a hole in the fabric; the tip of the needle simply gets between the weave and spreads the fibers apart momentarily so you can drag the thread through. With TurtleSkin, the fibers don’t shift.” Because the fibers do not shift, weapons or bullets are far less able to separate the fibers and pierce the skin.

Using this tight weaving technique, Warwick Mills also created Metal Flex Armor (MFA), and SoftPlate body armor. MFA offers stab protection from ice picks, hypodermic needles, and knives, and is a composite of hard steel elements laminated to Twaron woven fabric. This flexible laminate offers protection comparable with rigid steel plates in other body armor products, but with higher mobility and comfort. Over 50,000 MFA vests have sold. Like the MFA, the SoftPlate body armor offers flexibility, comfort, and armor concealment, but is designed to defeat handgun bullets (instead of piercing weapons). The manufacturing process for both of these laminates combines the tightly woven fabric with proprietary coating and finishing techniques developed during the NASA collaboration.

Public safety and military customers now benefiting from the TurtleSkin products include the United States Marine Corps, the New York State Department of Corrections, the Federal Bureau of Prisons, and police departments throughout the United States. The products are also in use by civilian law enforcement groups throughout the world including agencies in the Netherlands, Korea, and Peru.

Warwick Mills continues to reap new benefits from its NASA collaboration as it plans to offer a new TurtleSkin product soon: flexible ballistic vests that resist rifle rounds. Like the MFA line, this new technology “combines the benefits of ceramic and high-performance textiles that are direct descendants of the Mars bags,” says Cronin.

Vectran® is a registered trademark of Kuraray Co. Ltd.

TurtleSkin® is a registered trademark of Warwick Mills Inc.

Dyneema® is a registered trademark of Royal DSM N.V.

Twaron® is a registered trademark of Teijin Twaron USA Inc.

SoftPlate™ is a trademark of Warwick Mills Inc.

Kevlar® is a registered trademark of E. I. du Pont de Nemours and Company.

Spectra® is a registered trademark of Honeywell International Inc.

Abstract
In order to create the Mars Pathfinder's mission-critical airbags in the 1990s, NASA's Jet Propulsion Laboratory collaborated with New Ipswich, New Hampshire's Warwick Mills Inc. to weave multilayer textiles for the airbags for both Pathfinder and the Mars Exploration Rovers. Warwick Mills applied techniques from the collaboration to its puncture- and impact-resistant TurtleSkin product line. The company's metal flex armor (MFA) vests offer stab protection comparable with rigid steel plates and over 50,000 of the vests have sold. The SoftPlate body armor offers protection from handgun bullets, and like the MFA, is designed to be more comfortable than rigid vests. International public safety and military customers are now benefiting from the TurtleSkin products. 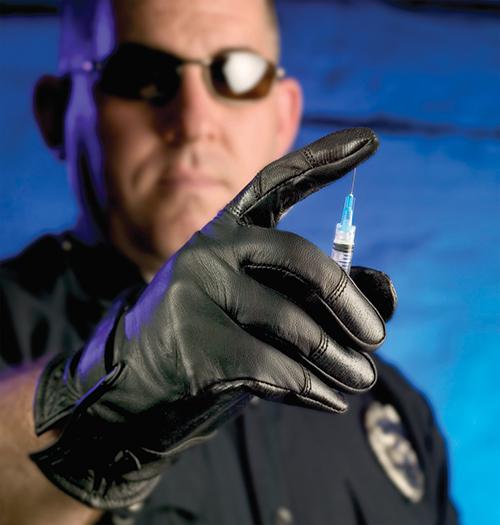 Available in the TurtleSkin line are puncture-resistant and needle-resistant clothing, such as these gloves. The TurtleSkin products are in use by various law enforcement groups around the world. 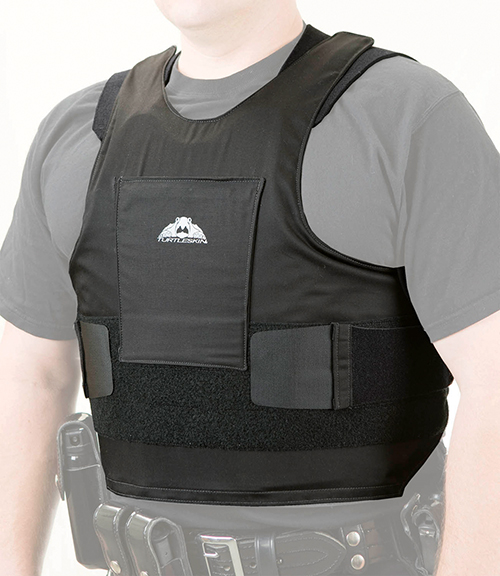 The Mars Pathfinder’s airbags incorporated multiple layers (up to four, depending on the location of the airbag) of lightweight fabric. When Pathfinder landed on Mars, the vehicle and its delicate payload were protected by 24 inflated spheres woven by Warwick Mills Inc.