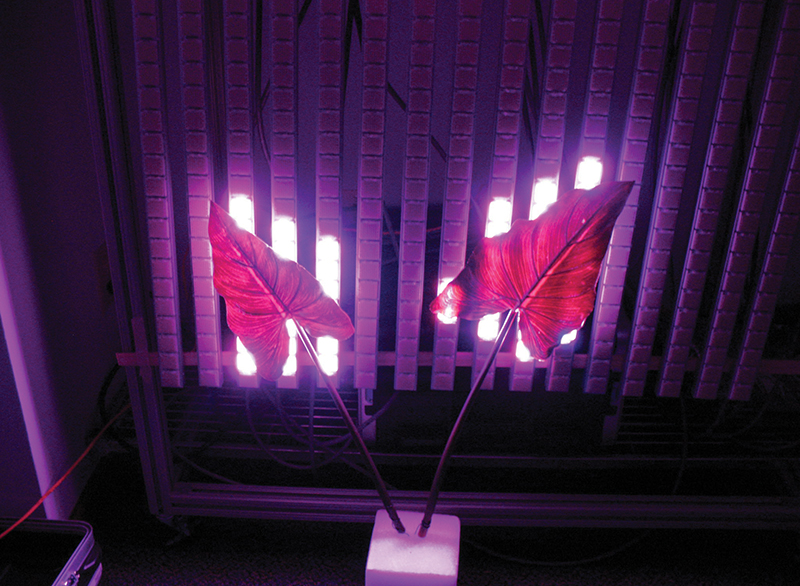 Living in space long term will require a sustainable environment. Plants provide fresh food, clean air, and clean water that will assist this effort, but plants need light to grow, and light requires energy. Here on Earth, most plants get this light from the obvious abundant source, the Sun. The Sun’s solar radiation is ideal for growing plants here on Earth, but it presents some problems for plant growth in space. For starters, the lengths of the days are different depending upon the location of the garden. For growing plants on spacecraft, this problem is compounded, as the vehicle position is constantly changing and is usually not positioned for optimal plant growth. Thus, NASA has been developing methods for growing crops in space using artificial light sources.

Lighting plants with electric lamps overcomes several difficulties, but presents an additional problem: It can require a great deal of valuable energy and produce unwanted heating of the plants. The solution appears to be LED lighting, which allows for precision and control, uses less power than traditional lamps, and radiates minimal heat onto the plants. In addition, LED lighting typically lasts much longer than traditional bulbs, is smaller and lighter weight, and does not present the same potential risks of glass breakage as traditional bulbs.

To help develop technologies for growing edible biomass (food crops) in space, NASA partnered with a small business in Wisconsin. Orbital Technologies Corporation (ORBITEC), located in Madison, is one of the state’s leading developers of new and cutting-edge aerospace technologies. The company has been awarded over $125 million in government contract funds over the course of more than 180 contracts, most of which were through commercial contracts that began in the Small Business Innovation Research (SBIR) program. Over the course of its extensive government work, ORBITEC was awarded Wisconsin’s “Professional Service Business of the Year” in 1995 and received the “Tibbets Award” both in 1996 and 1999 from the Small Business Administration. The “Tibbets Award” acknowledges small businesses that have performed exceptionally well within the SBIR program. One of the highlights of ORBITEC’s space-related work includes the 2002 launch of its Biomass Production System aboard STS-110 for a 73-day stay aboard the International Space Station.

One of the recent projects ORBITEC has been working on with Kennedy Space Center is the development of the High Efficiency Lighting with Integrated Adaptive Control (HELIAC) system, which uses targeted solid-state LEDs to efficiently grow plants. One configuration of the HELIAC system consists of a series of LED light panels called light engines. About 4 cm square and arranged in rows called “lightsicles,” these light engines are precision-controlled and allow for maximum efficiency in plant growth. Research for space applications is continuing through a partnership between ORBITEC and Purdue University.

While NASA is keen on this promising technology for future experiments in space, hardware and software protocols developed through the HELIAC program have the potential to save energy in commercial agriculture and in aquarium lighting while providing a host of additional benefits.

LED lighting systems are robust, easy to maintain, require less energy, produce little radiant heat, and reduce the dangers associated with pressurized bulbs, broken glass, mercury and high surface temperatures. What makes them truly ideal for plant growth, though, is their variable light output control. ORBITEC’s precision HELIAC control system allows lamp configuration to be adapted to a specific plant species during a specific growth stage, allowing maximum efficiency in light absorption by all available photosynthetic tissues. It can sense the presence of plant tissue and only power the adjacent elements, thus providing efficient, targeted lighting. Picture, for example, a newly sprouted plant. Traditional lighting for this plant would be broad and scattered mostly over the growing medium. The HELIAC system is able to sense exactly where the plant’s leaves and shoots are and spotlight those areas. This significantly reduces energy usage.

So far, ORBITEC has implemented a number of the technologies developed under the HELIAC project—several advanced control algorithms, sensors, drive circuits, thermal systems—into its commercial products. For example, horizontal light bars that allow real sunlight between the bars when available have been sold to research universities and controlled environment system manufacturers. The supplemental lighting allows growers to take full advantage of natural sunlight while also providing targeted lighting if sunlight is not available. This allows, for example, the plants to continue getting necessary light even on cloudy or rainy days.

The University of California, Davis purchased 216 of ORBITEC’s greenhouse bars for photobiology research, while many other customers are purchasing these units on a smaller scale for research or evaluation of the new technology for full-scale implementation. The units are still manufactured in-house by ORBITEC, but this may change as demand increases. Currently, though, the technology is constantly evolving.

Another application ORBITEC has found for its controllable plant growth technology is in aquarium lighting. In aquariums, water temperature is a major issue—it has to be just right for certain fish or corals to thrive. With a traditional light fixture, an aquarium also needs to be equipped with a chiller to keep the water from heating. With LEDs, which produce minimal radiant heat towards the water, this is not a problem. They also last much longer than traditional bulbs.

The primary advantage of the ORBITEC system over other LED-based aquarium lighting systems, however, is the programmability. Using drive circuitry, software, and thermal protocols developed for the NASA work, these lights offer unprecedented adaptability and precise controls. They can be set to provide a specific spectrum depending upon theof the aquarium. Subtle spectral adjustments can be made for coral or specific fish. The lights can even be set, for example, to dim periodically to create the illusion of a cloud passing over head, the changes of the tide, or to simulate the lunar cycle. These sophisticated settings allow aquarium life to grow and thrive as if it were in a natural environment.

Currently, ORBITEC has licensed this technology to two aquarium lighting manufacturers, one of which, C2 Technologies Inc., is manufacturing the devices and marketing under the name AquaIllumination.

AquaIllumination™ is a trademark of C2 Technologies Inc.

Abstract
To help develop technologies for growing edible biomass (food crops) in space, Kennedy Space Center partnered with Orbital Technologies Corporation (ORBITEC), of Madison, Wisconsin, through the Small Business Innovation Research (SBIR) program. One result of this research was the High Efficiency Lighting with Integrated Adaptive Control (HELIAC) system, components of which have been incorporated into a variety of agricultural greenhouse and consumer aquarium lighting features. The new lighting systems can be adapted to a specific plant species during a specific growth stage, allowing maximum efficiency in light absorption by all available photosynthetic tissues. 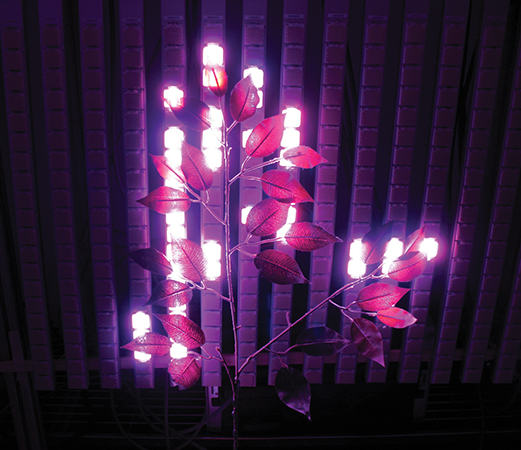