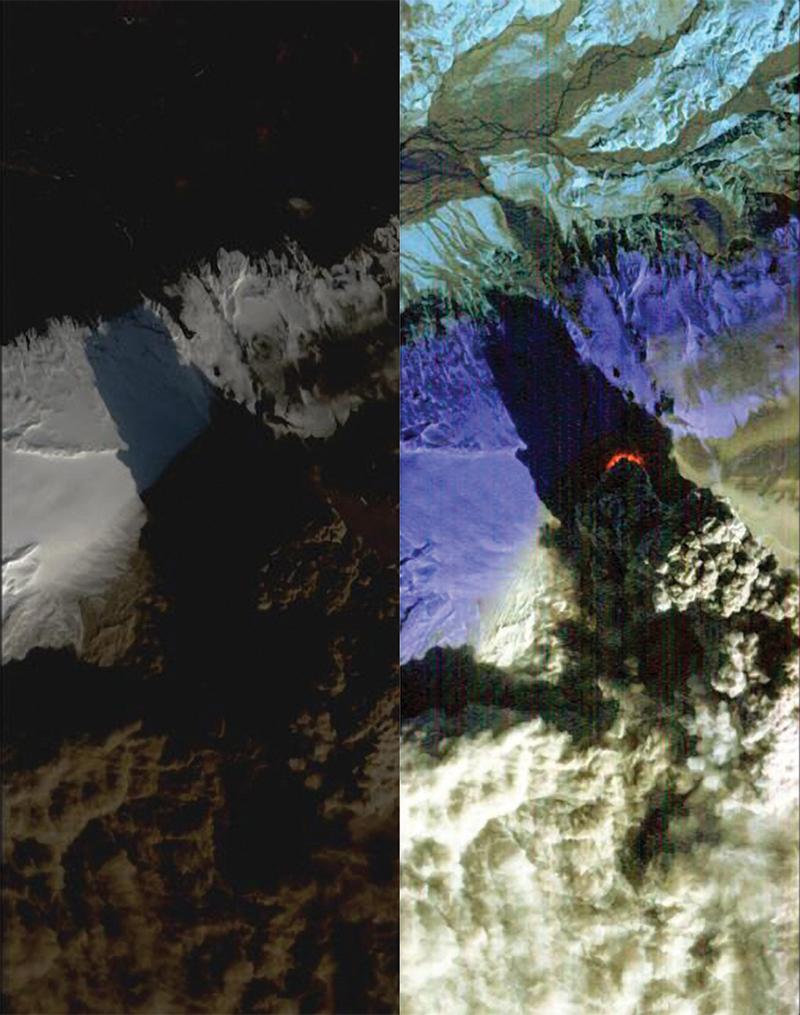 While the human eye can see a range of phenomena in the world, there is a larger range that it cannot see. Without the aid of technology, people are limited to seeing wavelengths of visible light, a tiny range within the electromagnetic spectrum. Hyperspectral imaging, however, allows people to get a glimpse at how objects look in the ultraviolet (UV) and infrared wavelengths—the ranges on either side of visible light on the spectrum.

Hyperspectral imaging is the process of scanning and displaying an image within a section of the electromagnetic spectrum. To create an image the eye can see, the energy levels of a target are color-coded and then mapped in layers. This set of images provides specific information about the way an object transmits, reflects, or absorbs energy in various wavelengths.

Using this procedure, the unique spectral characteristics of an object can be revealed by plotting its energy levels at specific wavelengths on a line graph. This creates a unique curve, or signature. This signature can reveal valuable information otherwise undetectable by the human eye, such as fingerprints or contamination of groundwater or food.

In 1983, NASA started developing hyperspectral systems at the Jet Propulsion Laboratory. The first system, the Airborne Imaging Spectrometer, led to the development of the powerful Airborne Visible/Infrared Imaging Spectrometer (AVIRIS) that is still in use today. AVIRIS is connected to the outside of aircraft and is used to gather information to identify, measure, and monitor the environment and climate change. In 2001, NASA launched the first on-orbit hyperspectral imager, Hyperion, aboard the Earth Observing-1 spacecraft.

Based on the hyperspectral imaging sensors used in Earth observation satellites, NASA engineers from Stennis Space Center and researchers from the Institute for Technology Development (ITD) collaborated on a new design that was smaller and incorporated a scanner that required no relative movement between the target and the sensor. ITD obtained a patent for the technology and then licensed it to a new company called Photon Industries Inc. In 2005, Lextel Intelligence Systems LLC, of Jackson, Mississippi, purchased the company and its NASA-derived technology (Spinoff 2007).

Without the technical expertise to market the product, the company’s license for the scanner returned to ITD. In 2008, Themis Vision Systems LLC, of Richmond, Virginia, obtained an exclusive license for the technology. The CEO of Themis, Mark Allen Lanoue, was one of the original researchers on the staff that developed the device at ITD and saw the potential for the technology. In 2005, Lanoue, several colleagues, and the technology were inducted into the Space Technology Hall of Fame, created by the Space Foundation, in cooperation with NASA, to increase public awareness of the benefits that result from space exploration programs and to encourage further innovation.

Themis delivers turnkey solutions in hyperspectral hardware, software, and algorithm development. Worldwide, Themis has built about 40 custom systems, including 3 at the Federal Bureau of Investigation’s hyperspectral imaging laboratory in Quantico, Virginia. With distributors and customers in more than 10 countries, Themis recently installed the first UV hyperspectral system in China to help with studies in forensic science, including fingerprint analysis.

The latest product lines from Themis include the Transluminous Series, the Optoluminous Series, and HyperVisual Software. What is most unique about these hyperspectral systems is their size. Themis has developed compact, 4-pound systems—as opposed to the larger, 7- and 10-pound ITD versions—that can fit on multiple platforms including microscopes, tripods, or production lines.

The Transluminous Series spans the spectrum from UV to infrared and uses a prism-grating-prism component to split incoming light into separate wavelengths. The Optoluminous Series, the newest line of reflective hyperspectral systems, uses a convex grating reflective spectrograph to gather wavelengths. Both lines feature the NASA-derived scanning technique that requires no relative movement between the target and the sensor.

The HyperVisual Software is a graphical user interface-based software package for end-user communication and control. Designed for the Windows operating system, it converts scanned images into a single image format containing spatial and spectral information. HyperVisual acquires and pre-processes the data so that it is ready for analysis. A number of pre-processing routines can be run on the images and then ported into off-the-shelf image processing packages.

Early on, the primary application for hyperspectral imaging was for remote sensing for agricultural and land-use planning applications. Now the number of applications continues to grow in a variety of areas: medical and life sciences, defense and security, forensics, and microscopy.

The U.S. Department of Agriculture used Themis systems for imaging poultry, beef, and other food products. For poultry, the system captured an image of a bird and then processed the image to determine if the bird had a defect such as a skin bruise, tear, or fecal contamination. The imaging systems also produced spectral signatures of dirt, fungi, fecal matter, and pathogens such as Salmonella and E. coli.

A company called X-Rite uses a Themis hyperspectral system to assist in quality control and color measurement in paint mixing. Estée Lauder has utilized a Themis system to improve cosmetics and makeup coverage. One organization is even using the product to develop camouflage, while another is using it to detect camouflage. Other military and defense applications include detecting landmines, tripwires, and for search and rescue operations.

In fact, Lanoue recently assisted a man with a painting that had been bought at an auction for $3,000. One day, the man noticed a faint signature under the obvious signature. Using a Themis hyperspectral imaging system, Lanoue was able to see the signature underneath. Lanoue and the owner are now working with art experts to confirm what the hyperspectral imaging seems to reveal: that the painting is actually the work of famous Spanish artist Diego Velázquez. This fact could help the painter’s owner turn a significant profit.

Transluminous™ and Optoluminous™ are trademarks of Themis Vision Systems LLC.

HyperVisual Image Analyzer® is a registered trademark of the Institute for Technology Development.

Windows® is a registered trademark of Microsoft Corporation.

Abstract
In 1983, NASA started developing hyperspectral systems to image in the ultraviolet (UV) and infrared wavelengths. In 2001, the first on-orbit hyperspectral imager, Hyperion, was launched aboard the Earth Observing-1 spacecraft. Based on the hyperspectral imaging sensors used in Earth observation satellites, Stennis Space Center engineers and Institute for Technology Development researchers collaborated on a new design that was smaller and used an improved scanner. The technology is now exclusively licensed by Themis Vision Systems LLC, of Richmond, Virginia, and is widely used in medical and life sciences, defense and security, forensics, and microscopy. 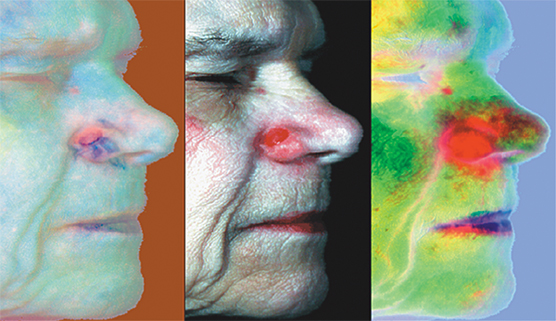 Based on the hyperspectral imaging sensors used in Earth observation satellites, NASA engineers and Institute for Technology Development researchers collaborated on a portable design for imaging the health of farmers’ crops. Exclusively licensed by Themis Vision Systems LLC, the company has developed compact, 4-pound systems that can fit on multiple platforms (right). One medical application for the technology is imaging for skin cancer, cervical cancer, and breast cancer surgery. The images above show cancer on a patient’s nose.

The Hyperion instrument onboard the Earth Observing-1 spacecraft obtained these images of Iceland’s Eyjafjallajökull volcano. The left-hand image was created with visible wavelengths; the right-hand picture is an infrared image.