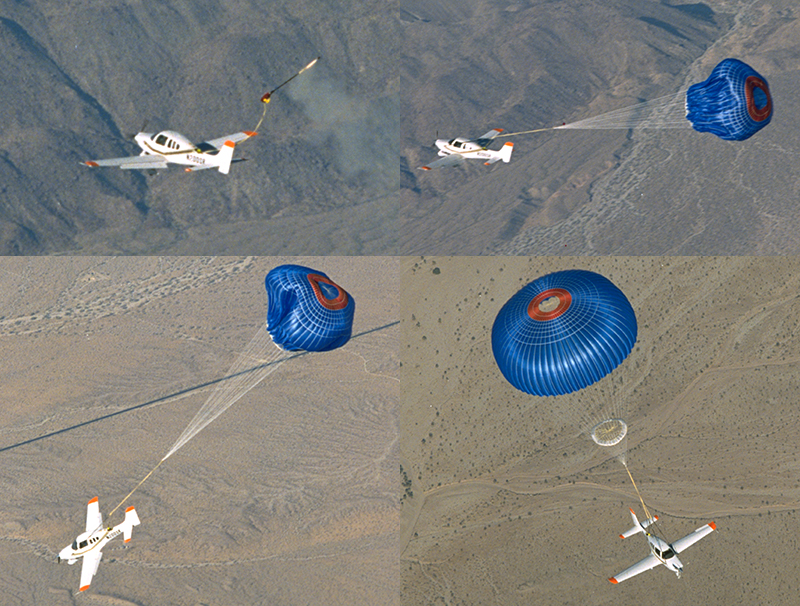 When Boris Popov was 8 years old, he took one of his mother’s sheets and some thread, made a parachute, climbed a tree, and jumped. The homemade chute did little to break Popov’s fall; his father took the disappointed boy aside and said, “Son, you’ve got to start higher.”

Years later in the mid-1970s, recent college graduate Popov was hang gliding over a lake when the boat that was towing him accelerated too quickly, ripping the control bar from his hands. Some 500 feet in the air, Popov’s glider went into a spiral, coming apart as Popov plummeted to the water. As he fell, Popov realized that if he only had some kind of parachute, he could have been saved. Before impact, he promised himself that, if he survived, he would create a solution that would save people in these types of emergency situations.

Decades later, the U.S. air transportation system was suffering its own kind of free fall. The terrorist attacks of 9/11 led to stringent security measures that complicated and slowed down air travel. Even as the industry recovered from the effects of the attacks, increased flights and passenger demand strained the National Airspace System (NAS) at levels never before experienced. At the same time, NASA was exploring ways of extending aviation to rural America using smaller general aviation (GA) aircraft and local community airports. The NASA Small Aircraft Transportation System (SATS) project envisioned an on-demand, point-to-point, widely distributed transportation system relying on small aircraft (4-10 passengers) operating out of the Nation’s more than 5,400 public-use landing facilities. With about 98 percent of the population living within 20 miles of at least one such airport, SATS could provide cheaper, faster, and more practical options for business and leisure travel, medical services, and package delivery.

Though the SATS project concluded its research in 2006, the pursuit of a nationwide GA transportation system continues through other initiatives like NASA’s Green Flight Centennial Challenge, scheduled for 2011, which encourages competing teams to maximize fuel efficiency for personal aircraft, as well as reduce noise and improve safety. Technological advances are still necessary, however, to make such a system viable, such as improving the safety of small aircraft. One solution has come in the form of an invention developed by Popov, who having survived his fall, began investigating methods of ballistically deploying parachutes for aircraft in emergency situations. Today, with the help of a NASA partnership, the parachute that Popov wished for when plunging to Earth is saving hundreds of small aircraft pilots from a similar fate.

Popov founded Ballistic Recovery Systems Inc. (now BRS Aerospace) of Saint Paul, Minnesota, in 1980. He formed the company to commercialize his solution to personal aircraft accidents like the one he experienced: a whole aircraft parachute recovery system. Soon BRS was developing parachutes for hang gliders, ultralights, and experimental aircraft, and the company received Federal Aviation Administration certification for a retrofit system for the Cessna 150 GA airplane. The company’s innovative safety solution for small aircraft led to Small Business Innovation Research (SBIR) contracts with Langley Research Center aimed at advancing the BRS parachute system for use with larger and heavier GA aircraft. The NASA funding helped BRS with the development of thin-film parachutes, continuous reinforcement manufacturing methods that result in stronger parachutes, and smart deployment devices—all of which help overcome one of the main obstacles to whole-aircraft parachute systems for larger vehicles: reducing bulk and weight while maintaining parachute strength.

“You can’t have a 50-gallon drum full of parachute in the back of a Cessna. It’s not going to work,” Popov says. Just as important as the research and development funding for BRS, he says, was NASA’s support of its parachute system.

“One of our primary needs for working with NASA was to promote and encourage the concept of a ballistic parachute on aircraft,” Popov says. “There was a lot of skepticism that this system could even work. NASA was very proactive in creating a safety mentality in general aviation.”

The BRS parachute system—first featured in Spinoff 2002—is deployed by a solid rocket motor activated when the pilot pulls on the cockpit handle release. The rocket fires at over 100 miles per hour and extracts the parachute in less than 1 second. Thanks to a patented shock attenuation device, the chute opens according to the speed of the aircraft; at high speeds, the chute opens only 25 percent for the first few seconds to reduce airspeed to the point where the chute can open fully and still sustain the opening shock. (The lightweight parachute material has to sustain the force of the rocket deployment, as well as the force of the aircraft.) At low speeds and altitudes, the chute opens quickly and completely to ensure rescue.

The system’s versatility makes it effective in a range of accident situations, from mid-air collisions and structural failure to a spiral dive or stall spin. The parachute arrests the descent of the entire aircraft and deposits the vehicle and its occupants on the ground with a typical impact force equivalent to falling 7 feet, which is largely absorbed by the aircraft’s landing gear and seats. Not only are lives saved, but in many incidents, expensive aircraft are preserved to fly again.

BRS has sold more than 30,000 systems worldwide since its founding. The parachute is now standard equipment on the Cirrus SR20 and SR22 planes, the Flight Design CT light-sport aircraft (LSA), the Piper Aircraft PiperSport LSA, and as an option on the new Cessna 162 Skycatcher. The company is projecting sales of close to $20 million this year.

BRS also produces parachute systems for military unmanned aerial vehicles, military cargo parachutes, and military training aircraft recovery parachutes. On training aircraft, if the pilot has to eject, “you basically have a 5,000-pound bomb that could go unpiloted down into a neighborhood,” Popov says. “We, however, can bring down the pilot and trainer aircraft safely to the ground.”

While parachutes for larger aircraft are still in the works, BRS does have a system designed for small jets, and its NASA partnership has provided the company with the technology that may eventually enable parachutes for commercial airlines and jets. In the meantime, Popov welcomes the role NASA has played in helping turn the promise he made to himself that day at the lake into a reality for the 246 people whose lives have been saved by the BRS parachute so far.

“BRS is a classic example of taxpayers’ money being spent on research that has translated into 246 lives saved,” he says. “That’s a justifiable and profound benefit.”

He tells a favorite story about a grandfather flying a Cirrus SR20 over the Canadian Rockies with his grandkids in the back seat. The grandfather lost control of the plane, which became inverted at night in the mountains. “You’re likely not going to recover from that,” Popov says. The grandfather deployed the parachute, and the plane settled gently on the side of mountain, where a rescue helicopter found it the next day. After being hoisted out by a helicopter and flown to a nearby airstrip, they put on a new prop and landing gear and flew the plane out.

“This grandfather thought he may have just killed himself and his grandkids, but when he pulled the handle and felt the parachute deploy, he knew he had just prevented that from happening,” Popov says.

“How many millions of dollars is that worth?”

Abstract
Small Business Innovation Research (SBIR) contracts with Langley Research Center helped BRS Aerospace, of Saint Paul, Minnesota, to develop technology that has saved 246 lives to date. The company's whole aircraft parachute systems deploy in less than 1 second thanks to solid rocket motors and are capable of arresting the descent of a small aircraft, lowering it safely to the ground. BRS has sold more than 30,000 systems worldwide, and the technology is now standard equipment on many of the world's top-selling aircraft. Parachutes for larger airplanes are in the works. 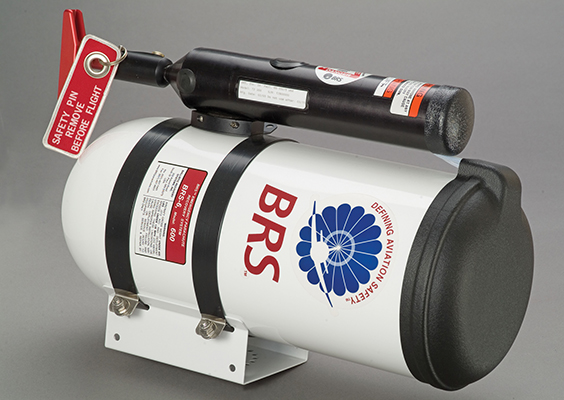 This BRS Aerospace Inc. parachute system, designed for sport aircraft, deploys its chute (contained in the white canister) in less than 1 second, thanks to a solid rocket motor (the black tube on top).

With the help of NASA funding, BRS developed parachutes that have saved hundreds of small aircraft—and their pilots and passengers. Here, a Cirrus SR20’s parachute deploys at over 100 miles per hour, arresting the plane’s descent. BRS parachute systems are standard equipment on Cirrus aircraft.