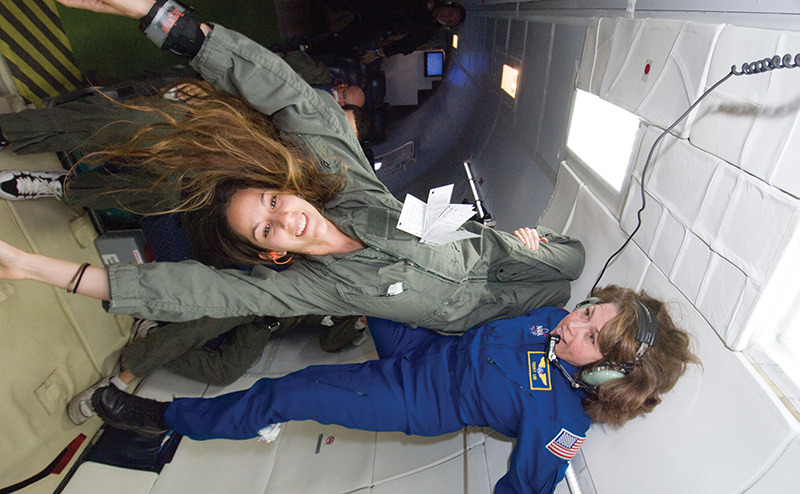 Have you ever felt nauseous reading a book in the back seat of a car? Or woken from a deep sleep feeling disoriented, unsure which way is up? Momentary mixups like these happen when the sensory systems that track the body’s orientation in space become confused. (In the case of the backseat bookworm, the conflict arises when the reader’s inner ear, part of the body’s vestibular system, senses the car’s motion while her eyes are fixed on the stationary pages of the book.) Conditions like motion sickness are common on Earth, but they also present a significant challenge to astronauts in space.

Human sensory systems use the pull of gravity to help determine orientation. In the microgravity environment onboard the International Space Station, for example, the body experiences a period of confusion before it adapts to the new circumstances. (In space, even the body’s proprioceptive system, which tells the brain where the arms and legs are oriented without the need for visual confirmation, goes haywire, meaning astronauts sometimes lose track of where their limbs are when they are not moving them.) This Space Adaptation Syndrome affects a majority of astronauts, even experienced ones, causing everything from mild disorientation to nausea to severe vomiting.

“It can be quite debilitating,” says William Toscano, a research scientist in NASA’s Ames Research Center Psychophysiology Laboratory, part of the Center’s Human Systems Integration Division. “When this happens, as you can imagine, work proficiency declines considerably.”

Since astronauts cannot afford to be distracted or incapacitated during critical missions, NASA has explored various means for preventing and countering motion sickness in space, including a range of drug treatments. Many effective motion sickness drugs, however, cause undesirable side effects, such as drowsiness. Toscano and his NASA colleague, Patricia Cowings, have developed a different approach: Utilizing biofeedback training methods, the pair can teach astronauts, military pilots, and others susceptible to motion sickness to self-regulate their own physiological responses and suppress the unpleasant symptoms. This NASA-patented method invented by Cowings is called the Autogenic Feedback Training Exercise (ATFE), and several studies have demonstrated its promise.

“We’re able to get people to significantly increase their motion sickness tolerance,” says Toscano, noting that in laboratory studies conducted over a 20-year period about 85 percent of those who have undergone the 6-hour training experienced benefits, with about 65 percent able to suppress their symptoms entirely.

In order to gather the necessary physiological data for their research and to enable the ATFE biofeedback training, Toscano and Cowings needed a practical solution for monitoring the vital signs of test subjects like astronauts and pilots.

“The biggest consideration with using physiological monitors on astronauts and aircrew is putting sensors on the body,” Toscano says. “You need to have an unobtrusive device.”

A company in Annapolis, Maryland, proved to have the technology the NASA researchers were looking for. Now the resulting partnership has both enabled NASA studies and provided powerful commercial fitness and health monitoring tools for soldiers, first responders, professional athletes, and consumers.

Zephyr Technology launched in 2003 with the goal of providing physiological status monitoring (PSM) for people in any condition or environment. Working with innovative technologies like smart fabrics and solid-state accelerometers, the company developed a unique PSM device—a narrow fabric band worn around the upper torso. Called the BioHarness, the product’s ability to capture, store, and transmit a range of vital sign data, coupled with its comfortable design, made it ideal for Toscano and Cowings’ research.

Under a Space Act Agreement, NASA partnered with Zephyr to use the BioHarness to study motion sickness in test subjects onboard the Zero-G aircraft. Parabolic-arc flights are used to train astronauts and conduct experiments in momentary microgravity. (The plane is also known as the “Vomit Comet” due to its motion sickness-inducing flight maneuvers.) Another study was conducted as part of the Department of Homeland Security’s (DHS) Physiological Health Assessment System for Emergency Responders (PHASER) program. NASA researchers used Zephyr’s technology to monitor the vital signs of firefighters to aid PHASER’s goals of determining the impact of the high-stress jobs on health. According to the DHS, first responders like firefighters experience the highest occupational rate of line-of-duty deaths from events like heart attacks and strokes.

Toscano and Cowings have even employed the BioHarness for training U.S. Navy fighter pilots to overcome the motion sickness some experience in flight; in the study, 5 of the 7 pilots were able to resume their jobs when overwhelming motion sickness had previously made them unfit to fly.

While the Ames researchers benefited from the use of Zephyr’s devices, the company also came away with significant NASA contributions.

“NASA’s depth of experience in physiology and knowledge of what’s been tried before is just massive for a small company like ours,” says Brian Russell, Zephyr’s CEO.

“We’ve been able to give Zephyr good feedback on the types of algorithms to incorporate into their firmware, and on topics like crew comfort issues,” says Toscano. “They have taken that information and redesigned their system over the course of several years.”

Zephyr’s BioHarness is now a market-leading technology and the cornerstone of its PSM training system. Through its smart fabric sensors, the BioHarness measures heart rate and heart rate variability, provides a heart electrocardiogram, and monitors breathing, skin temperature, motion (including speed and distance), and posture. The device can either store this data for later retrieval or transmit it using Bluetooth technology to a laptop to be displayed and analyzed by Zephyr’s OmniSense software. Additionally, the data can be sent to a smartphone loaded with any of a range of apps developed by Zephyr partners. A single PSM system can provide real-time monitoring of up to 64 BioHarness users. The applications of the gathered data are many, says Russell, but the common factor to all of them is utility.

“If you’re a doctor, a military commander, a medic, or a sports coach, our data needs to tell you something that’s useful,” Russell explains. With the company selling thousands of products a month, the usefulness of the company’s NASA-improved technology seems spoken for.

One key application for the BioHarness is in fitness training. The readings logged by the device provide valuable baseline information on a user’s fitness levels and help the user track improvement over time. Professional sports teams in football, basketball, hockey, and baseball use the BioHarness to support and monitor the effectiveness of training regimens. The data delivered by the system also helps trainers recognize when an athlete might be suffering from dehydration or excessive fatigue or is at risk for heat stroke—a condition that has resulted in the deaths of a number of athletes during training.

Working with the U.S. Special Forces, Zephyr tailored its PSM system for military applications, including determining the fitness of soldiers, and the company also provides PSM systems for first responders. In both cases, the data gathered by the BioHarness is transmitted via Bluetooth over the users’ tactical radios to OmniSense-equipped computers.

The company also offers a system called the Consumer HxM, which provides heart rate, speed, and distance monitoring in a consumer-friendly package, without compromising quality.“It’s very important that a consumer gets the same quality as a fireman or soldier is getting,” Russell says.

Zephyr’s technology has uses that go beyond fitness. On the battlefield, changes in vital signs can indicate if a soldier is injured, alerting medics more quickly than a radio call. The BioHarness continuously transmits data to the rescue vehicle and field hospital so that when the injured soldier arrives, doctors are up-to-date on the patient’s medical status. Similarly, the technology allows doctors to monitor patients in their homes or in nursing facilities.

“Anyone atwho needs medical care can have the BioHarness on and transmit that data over the mobile phone network to the doctor in the hospital,” Russell says.

Zephyr continues to evolve its PSM systems, moving the monitoring technology from straps into shirts and other clothing. In 2012, sports apparel and equipment manufacturer Under Armour plans to release its E39 shirt, which incorporates the Zephyr BioHarness. During the 2011 NFL combine, college football players hoping to be drafted by pro teams wore the shirts during various physical tests. The Zephyr-equipped shirts delivered physiological data not only to NFL scouts, but to fans watching the event on television, who could see immediately how high a prospect jumped, or how fast he ran.

“The athletes loved it,” says Russell. “They thought they were taking part in science fiction.”

Zephyr also continues to work with NASA on research projects, including a study conducted under an International Space Act Agreement to determine indicators of fatigue in commercial airline flight crews. Russell notes that Zephyr’s NASA partnership and U.S.-made technology tells the right kind of story for the Nation’s economic and technological progress.

“Having high technology from NASA and innovation from Zephyr resulting in factory jobs here in America, manufacturing products worn by American first responders, soldiers, and athletes—that’s what we need to drive the economy,” he says. “As a taxpayer, I find it heartening that NASA is so open to these partnerships.”

Bluetooth® is a registered trademark of Bluetooth SIG Inc.

physiology experts on motion sickness experiments, resulting in improvements to the company_s wearable vital-sign monitors. Zephyr_s monitors are now used to monitor the health and fitness of soldiers, first responders, pro athletes, and average consumers looking to get in shape. The company sells thousands of its NASA-enhanced products each month. 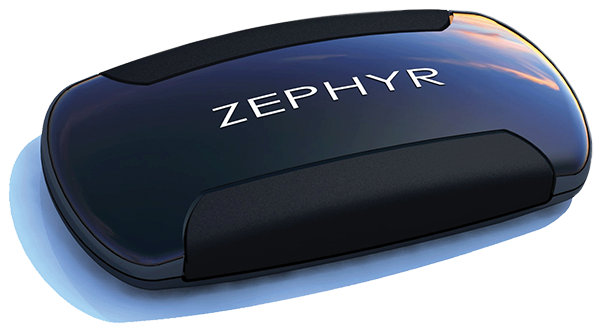 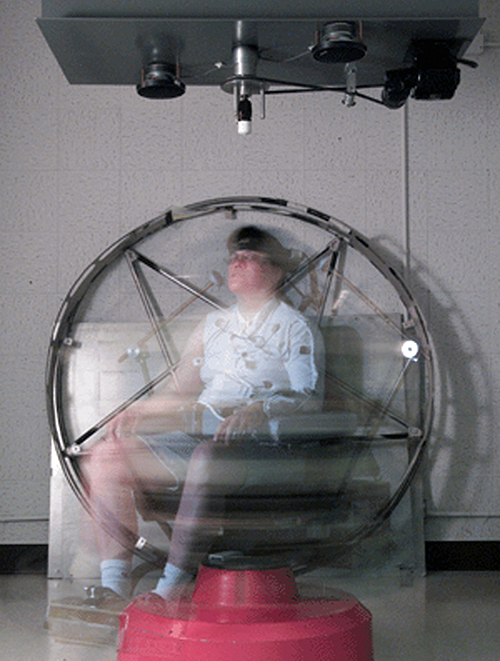 Ames Research Center and Zephyr Technology collaborated on a motion-sickness study in the microgravity conditions onboard a parabolic-arc flight. A Zephyr BioHarness monitoring device can be seen on the woman’s left wrist.