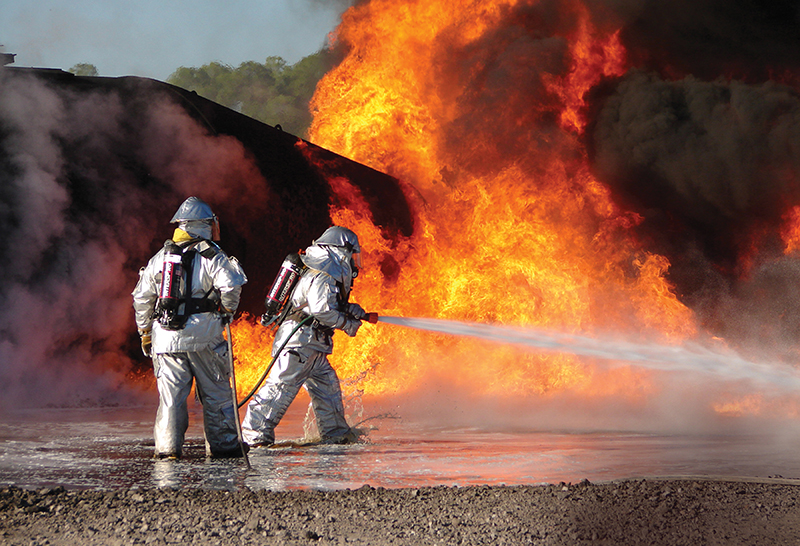 Much deserved attention is given to the feats of innovation that allow humans to live in space and robotic explorers to beam never-before-seen images back to Earth. In the background of these accomplishments is a technology that makes it all possible—the rockets that propel NASA’s space exploration efforts skyward.

Marshall Space Flight Center has been at the heart of the Agency’s rocketry and spacecraft propulsion efforts since its founding in 1960. Located at the Redstone Arsenal near Huntsville, Alabama, the Center has a legacy of success stretching back to the Saturn rockets that carried the Apollo astronauts into space. Even before Marshall was established, Redstone was the site of significant advances in American rocketry under the guidance of famous rocket engineer Werner Von Braun; these included the Juno I rocket that successfully carried the United States’ first satellite, Explorer 1, into orbit in 1958. And from the first orbital test flight of the Space Shuttle Columbia through the final flights of the shuttle program this year, these vehicles have been enabled by the solid rocket boosters, external tank, and orbiter main engines created at Marshall.

Today, Marshall continues to host innovation in rocket and spacecraft propulsion at state-of-the-art facilities such as the Propulsion Research Laboratory. Like many of its past successes, some of the Center’s current advancements are being made with the help of private industry partners. The efforts have led not only to new propulsion technologies, but to terrestrial benefits in a seemingly unrelated field—in this case, firefighting.

Orbital Technologies Corporation (ORBITEC) of Madison, Wisconsin has been a longtime NASA partner, working with the Agency on numerous projects—many through the Small Business Innovation Research (SBIR) program—on a range of space exploration needs, from growing crops in space (Spinoff 2010) to advancing rocket engines.

Through the SBIR program, ORBITEC has collaborated with several NASA Centers, including Marshall, to develop products such as a cool-wall vortex combustion chamber that represents a new way in rocket engine design. By feeding liquid or gas oxidizer into the combustion chamber in a manner that generates a swirling vortex flow, the design confines the mixing and burning of the propellant to the core of the chamber, keeping the walls free from volatile thermal stresses. This process increases the durability and lifespan of the engine while allowing for smaller, cost-effective, and even reusable engine designs. Through further SBIR contracts with Marshall, ORBITEC applied this innovation to an advanced vortex hybrid rocket engine that combines solid and liquid fuel to power a low-cost, highly reliable, and versatile propulsion option. The company is planning an initial test flight of the engine on a commercial rocket system for 2011.

“We were trying to make something more effective and safer for firefighters to use,” Groonwald says.

The idea of management of high pressure flows, like ORBITEC does with rocket engine design, repeatedly came to mind. Working with its partners, HMA incorporated elements derived from ORBITEC’s propulsion work into its design for fire suppression, and the improvements significantly enhanced the performance of HMA’s UHP systems. For example, the company studied how to better manage the flow of a liquid to create an energetic blanket of fine water droplets. Through iterative design and testing, they optimized a method for providing a continuous and effective stream that uses much less suppressant.

HMA’s propulsion-inspired design is only one of the benefits the company’s UHP suppression systems provide to firefighters. The systems introduce an approach to fire suppression that is complementary to—and in a number of cases superior to—traditional firefighting methods.

“The fire industry still has a mentality of ‘surround and drown’—the more water you put around a fire, the faster the fire will go out,” Groonwald says. “But that is not necessarily true.”

One series of tests using empty houses at Vandenberg Air Force Base compared an HMA system with a 20-gallon-per-minute, 1,400 pound-per-square-inch (psi) discharge capability (at the pump) versus a standard 100-gallon-per-minute, 125 psi standard hand line—the kind that typically takes a few firemen to control. The standard line extinguished a set fire in a living room in 1 minute and 45 seconds using 220 gallons of water. The HMA system extinguished an identical fire in 17.3 seconds using 13.6 gallons—with a hose requiring only one person to manage.

“[The HMA system] sucked the life out of the fire and did it faster than anything I’ve ever seen before,” says Devin Misiewicz, captain of the Vandenberg Air Force Base Fire Department.

The key to the HMA system is the pressure of its discharge, which results in smaller droplets dispersed on the fire. The smaller droplets create a greater total surface area contacting the flames—four times the total surface area of the larger droplets from standard, low pressure systems. In addition to helping rapidly extinguish a fire, HMA’s UHP approach also quickly reduces the temperature around a blaze—in the case of the Vandenberg test from 1,400 °F to below 250 °F within 60 seconds, about 2 minutes and 30 seconds faster than the standard equipment—and results in less smoke.

“What this does is create a safer environment for the firefighters to conduct an offensive suppression attack on the fire,” says Groonwald. Using less water also reduces one of the major sources of damage from a fire situation: the water itself.

HMA’s Hydrus systems are commercially available in a range of platforms. The T4 and T6 First Responder Emergency Systems incorporate the system into easily maneuverable, all-terrain vehicles. Along with the company’s Proteus Series Brush Trucks and skid-mounted mobile units that can be loaded onto any number of vehicles, HMA’s systems provide a quick-response firefighting tool for a range of fire situations. Carrying their own water sources, these systems are ideal for fighting wildfires in areas unreachable by standard fire trucks. The systems’ high pressure discharge can also penetrate 7 inches into the ground if desired, cooling lingering embers and heat sources that can reignite a wildland-type fire. The UHP systems are also highly effective against hydrocarbon fuel-based car fires and have been repeatedly proven to extinguish fully engulfed cars in 9 seconds.

While Groonwald says that HMA’s systems are not intended to replace standard firefighting technology in all cases, they can be installed on fire trucks as a first attack tool complementing traditional low pressure, high volume systems.

“Our systems become a force multiplier,” says Groonwald. “You can do more safely with the same amount of people.”

Government partnerships like those between HMA and ORBITEC, NASA, and the Air Force have supported the research and development leading to the creation of these game-changing firefighting tools, says Marty Gustafson, ORBITEC engineer and applications research manager.

“This is where the government-industry partnerships make a difference,” she says. “They allow you to prove out a technology in a way that gives you instant credibility.”

The experts are buying in: The U.S. military employs 4 UHP units at the forward operating base near Kabul in Afghanistan to help combat fuel fires and firebomb attacks. The Navy utilizes the systems in the Middle East, and 12 Air Force bases in the United States employ the technology. Alaska is also examining the systems for remote towns, where they can be used by operators without firefighting training, and the Mojave Air and Space Port in California features the technology on a specially designed rapid response rescue truck. Plus, municipal fire departments are interested in the technology’s NASA-enhanced capabilities, meaning cities and towns nationwide could soon benefit from another example of space exploration technology improving daily life. 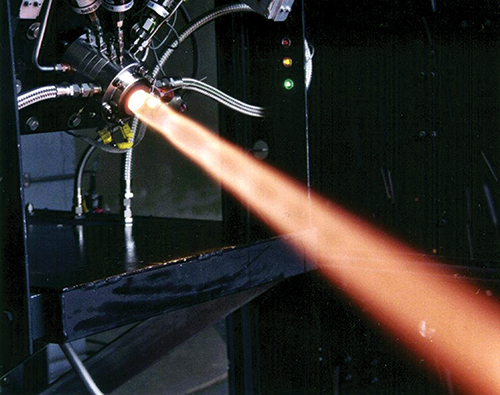 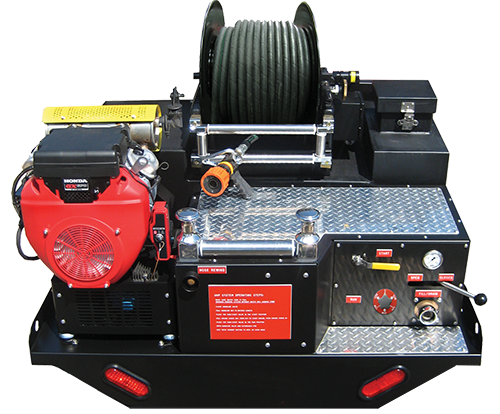 HMA’s Hydrus systems provide a versatile range of firefighting solutions, including the skid-mounted mobile unit seen here, which can be loaded onto a variety of vehicles. 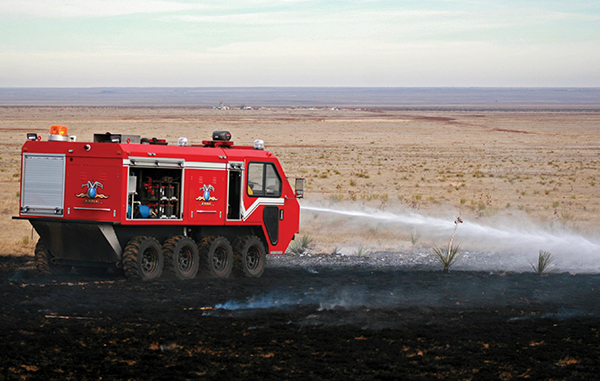