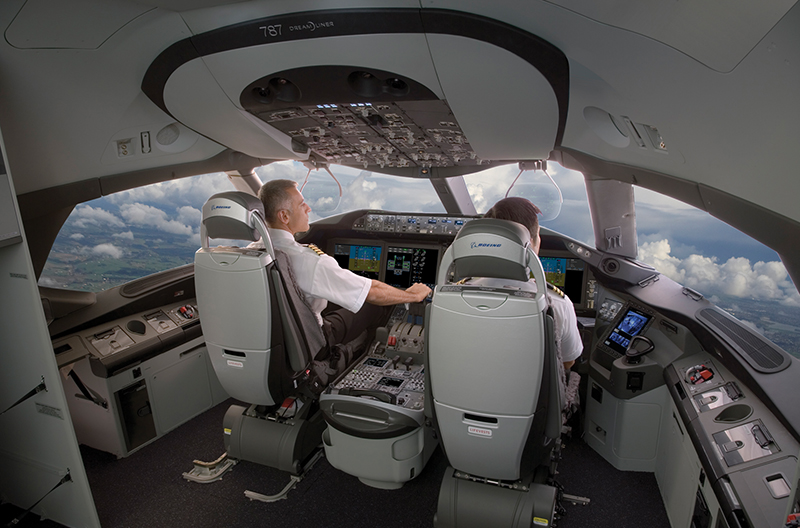 Heinz Erzberger never thought the sky was falling, but he knew it could benefit from enhanced traffic control. Throughout the 1990s, Erzberger led a team at Ames Research Center to develop a suite of automated tools to reduce restrictions and improve the efficiency of air traffic control operations. Called CTAS, or Center-TRACON (Terminal Radar Approach Control) Automation System, the software won NASA’s Software of the Year award in 1998, and one of the tools in the suite—the traffic management advisor—was adopted by the Federal Aviation Administration and implemented at traffic control centers across the United States. Another one of the tools, Direct-To, has followed a different path.

The idea behind Direct-To, explains Erzberger, a senior scientist at Ames, was that airlines could save fuel and money by shortening the routes they flew between take-off and landing. Aircraft are often limited to following established airways comprised of inefficient route segments. The routes are not easily adjusted because neither the pilot nor the aircraft controller can anticipate the constantly changing air traffic situation. To make the routes more direct while in flight, Erzberger came up with an idea for a software algorithm that could automatically examine air traffic in real-time, check to see if a shortcut was available, and then check for conflicts. If there were no conflicts and the shortcut saved more than 1 minute of flight time, the controller could be notified.

“I was trying to figure out what goes on in the pilot and controller’s minds when they decide to guide the aircraft in a certain way. That resulted in a different kind analysis,” Erzberger says.

As the engineer’s idea went from theory to practice, in 2001, NASA demonstrated Direct-To in the airspace of Dallas-Ft. Worth. Estimations based on the demonstration found the technology was capable of saving 900 flying minutes per day for the aircraft in the test area.

Interested in building upon Erzberger’s work, Michael Lewis, director of Boeing Commercial Airplanes’ Airline Efficiency Services based in Seattle, met with Erzberger and others at Ames Research Center to discuss Direct-To. Boeing was optimistic about transitioning Direct-To into a product that was practical for airlines to use.

“With the right set of data input, we thought it should be possible to deliver fuel and flight time savings advisories to airplanes while they were in flight,” says Lewis. “We thought the NASA software would be a great jumpstart.”

After the groups shared information, Boeing and NASA signed a Space Act Agreement. Soon after, Boeing licensed the technology and developed new software code on top of the core algorithms in the NASA tool. To test and confirm that the technology was practical for airlines to use, Boeing conducted trials with Southwest Airlines and Continental Airlines in 2008 and 2009.

“The trials confirmed our ability to run a significant amount of Boeing software, and ensured the advisories that we were sending worked properly,” says Lewis. “The main result was that the operational concept really worked.”

By 2010, Boeing had incorporated the technology into a subscription-based product called Direct Routes. Commercially available from 2011 as part of the company’s InFlight Optimization Services, Direct Routes provides real-time advisories to aircraft for suggested shortcuts that are prechecked for traffic conflicts, wind conditions, established airspace constraints, and other factors.

According to Boeing, Direct Routes can save tens of thousands of flight minutes per year for a medium-sized U.S. operator. In total, Lewis estimates the technology could save 20 million gallons of fuel per year for commercial airlines—the equivalent of approximately 50 million dollars per year. These fuel savings also translate into a direct reduction of thousands of tons of carbon emissions each year.

Direct Routes continuously monitors flights in real time to check for traffic control system variables, the aircraft’s current flight trajectory, air traffic control acceptability, weather conditions, and other factors. When there are small course adjustments along an airplane’s intended route that can reduce at least 1 minute of flight time, the pilot is notified with a message much like a text message on a cell phone. The pilot can then make a verbal request to the controller who can approve the new route.

“There are thousands of opportunities every day in the system that are currently left unrealized because neither the pilot nor controller is actively looking for them,” says Lewis. “Neither pilot nor controller has the full set of information. Direct Routes can automatically look at it all and insert the advisory within the normal operating procedure.”

The advisories made by Direct Routes are transmitted using existing communication channels and are designed to comply with current operating procedures. There are also no regulatory changes and minimal new equipment required. “There’s a small amount of start-up and readiness preparation, but no capital investment on the part of the airlines. In general, if an airline starts the service, it starts seeing fuel savings immediately,” says Lewis.

Direct Routes is currently available as a subscription service. Potential customers including aircraft flying in U.S. airspace such as commercial airlines, business aviation, military, general aviation, and international flights—many of which are already in discussion with Boeing about Direct Routes. “They all have opportunities to take shorter routes,” says Lewis. “Direct Routes is an ideal application of government investment plus some industry innovation. The result is real savings to airlines, passengers, and the environment.” 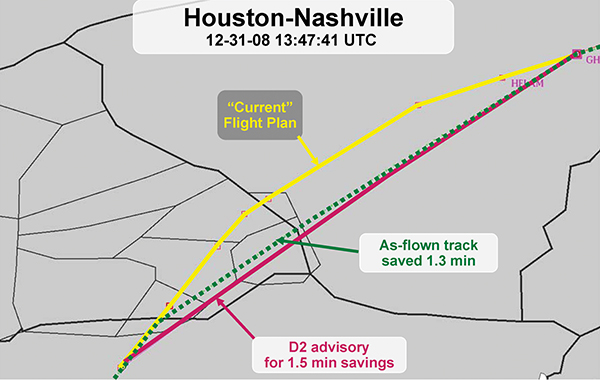 Boeing Commercial Airplanes incorporated Benefits into its Direct Routes service to monitor flights in real time and check for time savings. In this example, a flight saved 1.3 minutes by diverting from its original route to fly a more direct route.

In the 1990s, scientists at Ames Research Center devised a software algorithm to shorten the routes airlines fly between take-off and landing. That technology is now commercially available from Boeing.