The craftsmen in the Roman Empire who constructed the Lycurgus Cup 17 centuries ago probably didn’t think their artifact would survive for nearly 2,000 years as a prized possession. And they certainly couldn’t have known that the technology they used to make it would eventually become an important part of space exploration.

Carved from one solid mass, the cup is one of the few complete glass objects from that period, and the only one made from dichroic glass. Meaning “two-colored” in Greek, dichroic glass was originally created by adding trace amounts of gold and silver to a large volume of glass melt. The resulting medium partially reflects the light passing through it, causing an observer to see different colors depending on the direction of the light source.

The Lycurgus Cup, for example, is famous for appearing green in daylight and red when lit at night—symbolic of the ripening grapes used to fill it with wine.

NASA revitalized the production of dichroic glass in the 1950s and 1960s as a means of protecting its astronauts. Ordinary clear substances cannot protect human vision from the harsh rays of unfiltered sunlight, and everything from the human body to spacecraft sensors and computers are at risk if left unprotected from the radiation that permeates space. The microscopic amounts of metal present in dichroic glass make it an effective barrier against such harmful radiation.

While the ancient manufacturing technique called for adding metals to glass melt, NASA developed a process in which metals are vaporized by electron beams in a vacuum chamber and then applied directly to surfaces in an ultra-thin film. The vapor condenses in the form of crystal structures, and the process is repeated for up to several dozen coatings. The resulting material, still only about 30 millionths of an inch thick, is sufficient to reflect radiation even while the glass—or polycarbonate, as in the case of space suit helmets—remains transparent to the human eye.

The NASA method of vaporizing and applying metal in ultra-thin layers has since become a widespread manufacturing technique, used in everything from special lighting fixtures to contemporary art. Jan Lewczenko, owner of JL Crystal Artistry LLC, based in Mount Pleasant, Pennsylvania, first heard of dichroic glass through a crystal vendor based in nearby Pittsburgh and has used it in his own work ever since.

For 40 years, Lewczenko has practiced as a master cutter—a designation he originally achieved while living in his native Poland. Following a dramatic escape from the communist regime to the United States in 1981, he worked in the crystal art industry while establishing a new life. Years later, he finally achieved his dream of independence by opening his own art studio, where NASA technology benefits his art to this day.

Lewczenko believes that the key to incorporating dichroic glass into artwork is using just enough of it to create something special. “Dichroic glass can overwhelm a piece of art if you aren’t careful, so I use it to create accents. It adds surprise to a piece. A main color shows from one angle, and when the glass is laminated on a piece of art, it creates a very different color.”

Lewczenko uses the material’s special properties to great effect. For example, in one piece, titled Magnolia, the center of the flower is made of dichroic glass, shining deep red while at the same time subtly radiating a rich blue at the base of the petals. Lewczenko often works the dichroic glass into his art between the sculpture and its crystal base. “If you light it from underneath or behind, the effect is just magical,” he says.

Today Lewczenko undertakes custom art of all kinds. His creations are in high demand, and have been commissioned by such dignitaries as popes John Paul II and Benedict XVI, as well as every President of the United States since George H.W. Bush. His works can also be found in the corporate collections of Tiffany, PepsiCo, Audi, Mercedes-Benz, and Porsche, among others.

Even some of the clear crystal he uses has a NASA connection: the glass he prefers to work with—according to Lewczenko, the purest in the world—is formulated

specifically for NASA and the military, who use it in optical applications. A small amount is made available each year for artists, which Lewczenko acquires whenever possible.

Abstract
Early in the space program, Johnson Space Center developed a vacuum-deposition method for applying ultra-thin coatings of metal to substances. The technology spun off into commercial applications, such as the manufacture of dichroic glass. Jan Lewczenko, owner of Mount Pleasant, Pennsylvania-based JL Crystal Artistry LLC makes use of dichroic glass in his crystal sculptures. 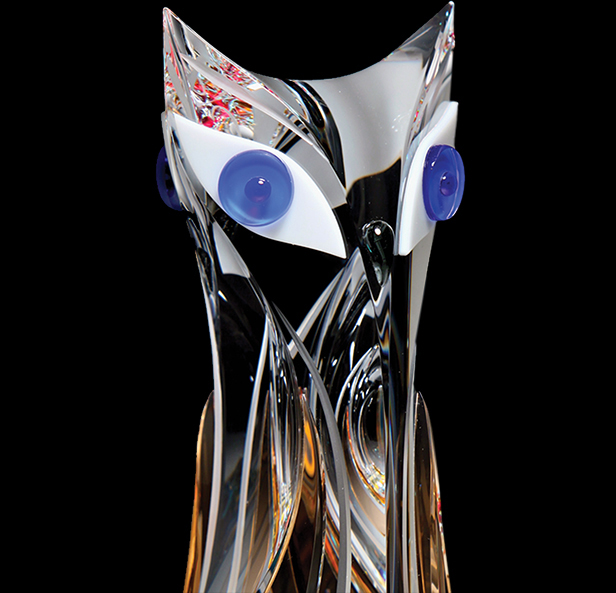 When used at the base of a sculpture, dichroic glass can create color throughout the piece. 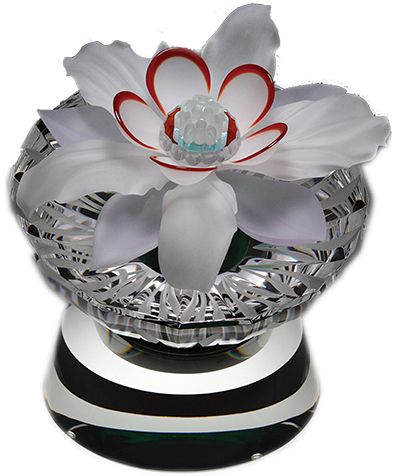 This creation, Magnolia, features dichroic glass laminated into the center of the flower. Although red is the primary color infused by the glass, one can also see blue reflections in the crystal, thanks to the glass’ ability to show different colors from different angles.