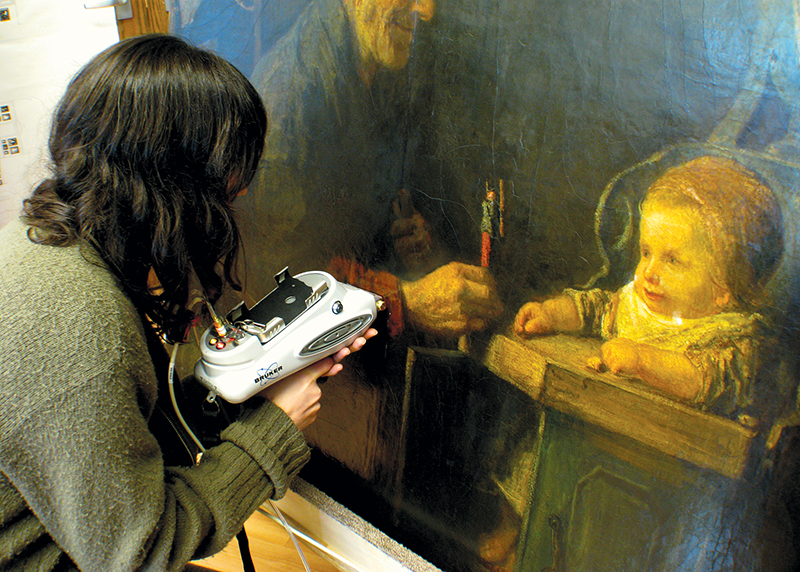 What do you think the paper or computer screen you are looking at is made of? Are the shoes you are wearing really made of leather? Is the table nearby made of wood? How can you be sure?

For most people, these questions may sound like useless speculation, because they are largely inconsequential to daily life. But knowing the precise chemical makeup of spacecraft components is a crucial part of quality control and can help ensure a successful mission. And learning that the paint on a canvass was produced using modern materials could be what prevents a museum from spending $10 million on a forgery.

The truth is that we perform a kind of molecular analysis every time we use our eyes. As light reflects off objects, the photons captured by our eyes get interpreted as colors. Of the millions of colors human beings are capable of seeing, all fall within gradations between 1–3 electron volts (eV). Photons close to 1 eV we see as red, photons close to 3 eV we see as violet, and everything in between correlates with the rainbow.

X-ray fluorescence (XRF) analysis is one way of getting past the limitations of human vision. As Bruce Kaiser, a scientist and pioneer in XRF technology, explains, “An XRF scanner is essentially an expensive flashlight, except that instead of using 1–3 eV, it uses 1,000–40,000 eV.” The difference in range is due to a specialized fluorescent tube. Ordinary fluorescent tubes produce light by agitating a gas with electrons; the tube in an XRF scanner, by contrast, houses a solid piece of rhodium, which is agitated using highly accelerated electrons.

With XRF-created light shining on an object, all one needs is a device to interpret the X-ray photons that are coming back—information that conveys the elemental structure of the object being viewed. “It works just like your vision, except that instead of seeing colors you can look at the atomic structure and detect elements. Every atom emits a unique color pattern; we just don’t have names for them because our eyes cannot see them,” says Kaiser.

The lighter an element is—that is, the lower its number on the periodic table—the lower its eV range will be, meaning that returning X-rays will be weaker. Conventional XRF scanners typically have no trouble reading elements heavier than calcium, but some materials important to NASA, like aluminum and silicon, fall below that threshold and are difficult to detect. “Aluminum is really popular with the aerospace industry, but its photon is only 1,470 volts,” says Kaiser. “That won’t even go through a quarter-inch of air; the air stops it.”

In 2001, scientists at Marshall Space Flight Center began searching for ways to enable easy, accurate, and consistent XRF scanning of aluminum alloys using a portable device. Doing so would improve quality control on a wide range of flight hardware, effectively giving field technicians an entire materials lab’s worth of tools in a single, hand-held instrument.

Because the primary hurdle facing light-element detection was the air between the scanner and its object, NASA and KeyMaster created a vacuum chamber that could be incorporated into the instrument. During development, NASA provided the materials for a prototype and personnel to evaluate the device; KeyMaster contributed its technical expertise and hosted the project in its facilities.

The resulting XRF scanner could easily detect lighter elements such as aluminum and silicon; in fact, it could detect any gas, liquid, powder, or solid heavier than neon. KeyMaster and NASA filed joint patents on the vacuum system as well as on some of the other applications of their research.

Following the patents, the company licensed the technology and made it commercially available. Says Kaiser, “The partnership was a very fruitful relationship and essential to the development of the vacuum technology for the XRF system. NASA’s participation added credibility when our small company began marketing this new product.” Bruker AXS now sells the technology as the Tracer III-SD and Tracer III-V.

The NASA-improved XRF scanners have been particularly well received in museums, where they are used to authenticate artifacts and works of art and assist those who conserve them. Tracer’s ability to detect the elemental composition of an object with a simple, nondestructive scan makes it ideal for analyzing precious, rare, or delicate items. Kaiser estimates that more than 600 museums and universities worldwide now use the device, including such institutions as the National Archives, the Field Museum of Natural History, the Louvre, the National Gallery, and the British Museum.

One reason the device is so popular is that experts in art history or archeology can easily be taught how to use it. “It doesn’t take a chemist to operate it,” says Kaiser. “I can teach anyone how to point the scanner, look at the color pattern, and figure out what they’ve got.”

As a practical example of the technology’s impact, Kaiser cites art authentication: “I can make something look yellow, but there are a hundred different ways to make something look yellow. Van Gogh only used one. If a museum is eyeing a newly discovered painting, it might be beautiful, it might have the right style and details, but if the elements in the pigments don’t match what Van Gogh used, then you know it’s not his. And yet the museum was about to spend $2 million on it.”

In addition to authenticating objects, the scanner also assists conservators as they preserve or restore items. For example, a person getting ready to restore a painting can use the scanner to ensure that he or she is using the same pigments found in the painting so that the new paint matches it exactly. At other times, museums will purposefully select the wrong pigment so that the new paint can easily be identified and removed when the work is restored at a later date.

The expanded capabilities of XRF scanners have proven valuable for many other applications outside of museums. Tracer scanners have previously been profiled for their impact in the carpet cleaning industry

(Spinoff 2006), and they are also used to test the composition of consumer products like food and medication to ensure they are free of contaminants.

We might not spend much time wondering about the elemental composition of the things we use and consume each day, but for those who need to find out, this successful NASA-commercial partnership has provided a valuable tool for the job. 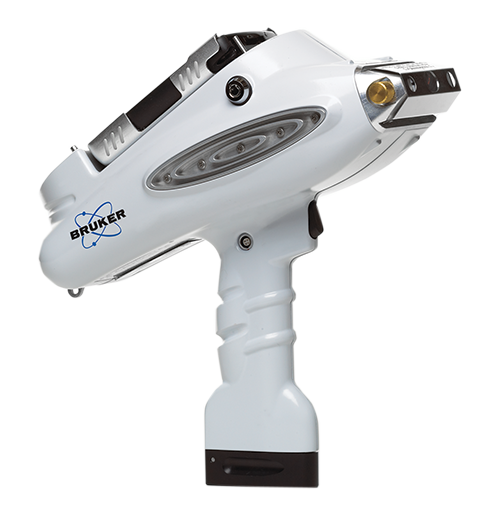 The Tracer is the first handheld X-ray fluorescence (XRF) scanner that can detect aluminum alloys, which are used frequently in flight hardware.

Bruker AXS’s XRF scanners quickly and easily identify the elements of an object down to parts-per-million—sufficient to analyze NASA spacecraft components or authenticate works of art.