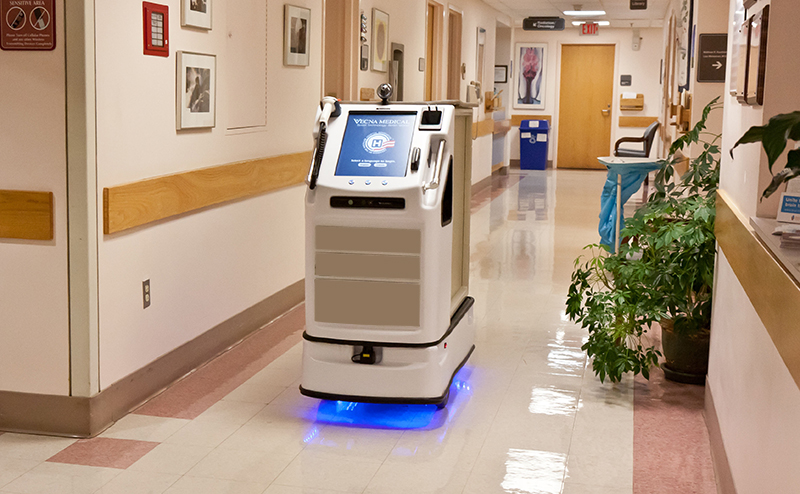 Before Curiosity came the Mars Exploration Rovers, Spirit and Opportunity. Before Spirit and Opportunity came Pathfinder and Sojourner. Before Pathfinder and Sojourner, the Mars Global Surveyor, and before the Mars Global Surveyor, the Viking landers. Over the years, a host of Mars missions and programs have built on one another, spurring technology advancements that have led to the impressive collection of Mars information and images that we have today.

The development of new technology has made Mars missions possible. Between and during actual missions and programs, NASA scientists and engineers also gain valuable knowledge and experience from research models, or prototypes, for Mars missions. One such prototype—Rocky 7—was built at the Jet Propulsion Laboratory (JPL) in the mid-1990s as a research test rover for navigation and sampling technology on Mars.

According to Richard Volpe, a robotics manager at JPL, the mechanical design of Rocky 7 allowed a system with fewer actuators, or motors. With fewer actuators needed for mobility, others could be used for manipulation: a short sampling manipulator (an arm), and a long instrument manipulator (a mast). Rocky 7’s arm could dig and collect small rocks and soil, while the mast had stereo cameras and the capability to hold an additional instrument, usually a microscopic imager.

“The primary purpose of the mast was to provide images of the surrounding terrain from a high vantage point,” says Volpe. “Using this capability in field tests in the Mojave Desert with Rocky 7, we demonstrated the operation style for a long distance rover—paving the way for Mars Exploration Rover operations later.”

Following the desert field tests in 1996 and 1997, Rocky 7 was used for algorithm development and testing, including for autonomous rock grasping.

In the mid-1990s, JPL provided funding for the Vision and Touch Guided Manipulation group at the Massachusetts Institute of Technology’s (MIT) Artificial Intelligence (AI) Lab to develop object acquisition capabilities for robotic missions with a mounted arm—like that on Rocky 7.

MIT utilized two platforms for developing control capabilities to acquire rock samples: a Whole-Arm Manipulator (WAM) and a mock-up of Rocky 7. At the time, Daniel Theobald was a graduate student working in the AI Lab, where he used the WAM to pick up rocks, present them to the camera, and then weigh and sort them into containers. “It was cutting edge work nearly 20 years ago,” he says.

Theobald built the test system simulator for the mock-up Rocky 7 system and used it to test the arm’s capabilities. “We were really focused on rock sample collection and opportunistic science,” he says. “If a rover notices an interesting object, could we build a system where the robot is smart enough to say, ‘Hey, this could be interesting, and I’m going by it, so I might as well grab a little bit of data’? That’s opportunistic science.”

After developing the operating system for the Rocky 7 mock-up, Theobald wrote his graduate thesis on the system as well as research for autonomous robot behavior mediated by humans from a distance. He explains, “Rather than move the joystick and make the robot move forward, I might verbally dictate to the robot, ‘Go to these coordinates,’ and the robot figures out how to control the motors to get to those coordinates. That’s autonomy—having it control the motors itself rather than have me control them.”

By 1999, MIT alumni founded Vecna Technologies, of Cambridge, Massachusetts, and Theobald started working with the company to apply the insights he gained at the AI Lab. “I thought, if we can successfully have a robot operate on Mars for an extended period of time, then we should have robots on Earth, providing value on a daily basis,” he says. “The robot autonomy system I developed for the Rocky 7 test platform acted as a starting point for the autonomy systems for Vecna’s QC Bot,” he says.

According to Theobald, conceptually, the QC Bot is a Mars rover in a hospital. “Like the Mars rover, it must be able to operate robustly in a complex, unstructured environment away from the engineers who designed and built it,” Theobald says.

To ease logistics in hospitals, QC Bot can be used for everything from delivering medications or taking out the trash, to ushering patients to their appointments. A configurable touch screen allows hospital staff and patients to interact with the robot through intuitive menus. The touch screen can be used for completing bedside registration as well as capturing vital signs. To achieve each of these tasks, the robot can autonomously call elevators and find its way through corridors.

The QC Bot not only incorporates autonomy, but also interacts with humans in natural ways that follow social conventions. “We have put a lot of effort into the human-robot interaction aspect of the project to make sure that people enjoy interacting with the robot. That is one thing we didn’t have to worry about on Mars,” says Theobald.

The robot’s location can be communicated to hospital workstations, smart phones, or mobile devices, and doctors and nurses can call QC Bot to transport items like laundry, packages, or meals. Users can also place items in the robot’s locking drawers, indicate the recipient, and then verify identities through biometrics, ID cards, or barcodes. If QC Bot encounters an unfamiliar obstacle in a facility, it will find a way around it or find a new route.

Currently, QC Bot is being used at a number of hospitals in the United States and internationally. Theobald believes the technology has the potential to improve efficiency, reduce medical errors, and increase patient and staff satisfaction. So far, the NASA-derived technology has helped to create 20 new jobs at the company, and Theobald expects that number to expand.

Most recently, Vecna’s QC Bot technology started spinning back into NASA. “We have a new NASA partnership through the SBIR program on using machine vision techniques to monitor astronaut performance and health based on human tracking work that we do on QC Bot,” says Theobald. “We really enjoy working with NASA to push the boundaries of human understanding while at the same time using that work to provide concrete benefit to daily life here on earth.”

And that is precisely how technology innovation happens. Before QC Bot came Rocky 7. What will QC Bot lead to?

QC Bot® is a registered trademark of Vecna Technologies.

Abstract
The Jet Propulsion Laboratory provided funding for the Massachusetts Institute of Technology to develop capabilities for robotics like Rocky 7. After developing the operating system, Daniel Theobald started working at Cambridge, Massachusetts-based Vecna Technologies. Today, Vecna's QC Bot incorporates systems based on the NASA work and is being used to ease logistics at hospitals. The technology has contributed to 20 new jobs.

The QC Bot can do everything from delivering medications to ushering patients to their appointments. Conceptually, it’s a Mars rover in a hospital, according to Daniel Theobald of Vecna Technologies.