Emergency Systems Save Tens of Thousands of Lives

Shortly before midnight on September 21st, 2010, the small fishing boat Ebby Luz started taking on water. In immediate danger and 8 miles from the shore, its crew activated an emergency beacon that began transmitting their distress signal, identity, and location. Within minutes, the Coast Guard was notified and launched a helicopter to the coordinates received from the alert. Even though the vessel had already sunk by the time help arrived, and despite it being pitch dark, the rescuers were able to locate and save both crewmembers from the water.

These two sailors were among the 295 people in the United States saved through the NASA-developed Search and Rescue Satellite Aided Tracking (SARSAT) system in 2010. Since SARSAT was introduced in 1982, nearly 7,000 have been saved in the United States alone. Worldwide—the international effort is known as Cospas-Sarsat—over 30,000 people have been rescued as a result of these emergency beacons and the satellite/ground-station system they rely on.

SARSAT had its beginnings in a tragic 1972 plane crash in Alaska that resulted in the deaths of two US congressmen. The plane’s disappearance sparked a 39 day search over 300,000 square miles, but to this day the spot of the crash remains undiscovered.

At the time, emergency communications for crashed or stranded airplanes were limited to beacons that transmitted a signal at 121.5 MHz, which is in the middle of an aircraft’s radio band. Pilots worldwide left their plane’s radio tuned to that frequency when not in use, in the hopes that distress signals might be picked up by someone flying overhead.

Though better than nothing, there were critical problems with this system, explains David Affens, manager of the Search and Rescue Mission Office located at Goddard Space Flight Center. “Even though there are many airplanes flying at any given time, the territory they actually cover is sparse. And even when a pilot did pick up a signal, those early beacons gave no intelligence—no location or identification. It was just a simple tone that indicated trouble,” he says.

Following the Alaskan plane crash, Congress directed that an effort be made to find a better technology for locating the sources of distress calls—an effort that NASA led. In the latter half of the 1970s, NASA and several other international organizations experimented with the use of satellites to detect and locate emergency beacons.

Satellite tracking of distress signals offered several advantages over the original “monitoring the radio” system. Most importantly, relatively few satellites could provide near-global coverage, ensuring that many more distress calls were heard. And because of the motion of the orbiting satellite, the signal frequency changes as the satellite passes the location of the beacon (this is known as the Doppler effect), meaning that even a simple tone could now be processed to provide location data for rescuers. “You can do some interesting Doppler calculations with the signal that gets captured,” says Affens. “The measurements we make from the change in frequency as a function of the satellite’s position give us a pretty good idea of the signal’s location.”

Following testing, the United States, Canada, France, and the Soviet Union signed an agreement in 1979 to develop what would become Cospas-Sarsat, an internationally recognized configuration of beacons, satellites, and ground stations—as well as the technology behind each of these components—to receive and process distress signals.

SARSAT, the part of the system operated in the United States by the National Oceanic and Atmospheric Administration (NOAA), began official operations in 1982. Within days, a downed aircraft was detected and its passengers rescued using the system, which Affens says was a confirmation of SARSAT’s viability and importance. Following a set of international agreements—including commitments to run the system for many years, as well as to make its benefits available to all states on a nondiscriminatory basis—Cospas-Sarsat was declared operational in 1985.

The first generation of the technology used satellites in low Earth orbits (LEO) to detect signals transmitted at the same 121.5 MHz frequency used by airplanes, which were repeated by the spacecraft to designated ground stations for processing. For the satellite component of the system, NASA could utilize spacecraft that had other primary missions. But in order to establish the beacon and ground station components, NASA enlisted the help of commercial entities, including Techno-Sciences Inc. (TSi), of Beltsville, Maryland, which won multiple contracts with Goddard to create the first operational ground stations.

This first system provided near global coverage for emergency beacons, but it still had limitations. Because the LEO satellites in use move at high speeds relative to the distress beacon on the surface, a stranded person has at most a 15-minute window to be heard by a passing satellite. Additionally, the orbits of present satellites equipped to handle distress signals are spaced apart such that someone in distress might only encounter one or two satellites over the course of several hours—potentially creating long delays before the transmission is picked up.

The system has been augmented over the years to include geostationary satellites—or satellites whose orbit matches the rotation of the Earth, making them appear stationary from the ground—and an improved beacon signal, both developed at NASA. While these satellites cannot transmit Doppler data, they can alert rescuers that a beacon has been activated. They also have the capability to receive signals transmitted at 406 MHz, a frequency that allows the beacon to send digitally encoded information, such as a GPS location and personal identification, giving rescuers greater awareness of the situation.

Despite the aid of geostationary satellites, however, the potential delays in signal reception remained. To resolve this weakness, NASA spearheaded an effort to create what became the Distress Alerting Satellite System (DASS). DASS enhances the existing system by incorporating search and rescue instruments on global positioning system (GPS) satellites. Currently, there are more than two dozen satellites in the GPS constellation in mid-Earth orbit (MEO), and they are distributed such that every point on the Earth is visible to at least four satellites at any given time.

DASS is designed to reduce the time from beacon activation to rescue by acquiring as much data as possible. Whenever a distress signal is relayed by multiple MEO satellites to a ground station, time and frequency measurements are made and combined to calculate the beacon’s location. “With just one burst of the beacon, you get two different data sets from each of at least four satellites,” explains Affens. “Each one alone is sufficient to give you an accurate location. And with each additional burst you get even more data to refine the location further.”

The high quantity of data received means that rescuers have the luxury of being picky about the quality of the data they rely on. With so much information available, the system can simply throw out any bad data, improving the precision of calculations.

As each generation of SARSAT has been developed by NASA, commercial partners like TSi have contributed hardware and technology to support development and ongoing operations. TSi designed and installed the DASS prototype ground station for the Search and Rescue Laboratory at Goddard, and the company was selected by NOAA in 2009 to build the first DASS ground station capable of becoming operational in the United States, which will be installed in Hawaii.

Gilmer Blankenship, chairman of TSi and a professor at the University of Maryland College Park, says that these partnerships help put TSi in position to compete in the global market for search and rescue components. “We’ve now built stations in the United States, India, Spain, Norway, and about 15 other countries for a wide range of organizations. For us, this was a direct spinoff of NASA technology that turned into a commercial business, which we still participate in today,” he says.

The long reach and overall effectiveness of the Cospas-Sarsat system was demonstrated in 2010 through the high profile rescue of Abby Sunderland. Sunderland, 16 years old at the time, was attempting to become the youngest person ever to sail solo around the world. When her boat was severely damaged in a storm in the middle of the Indian Ocean, Sunderland found herself stranded in one of the most remote parts of the globe: she was 2,000 miles from the nearest land and in a region where few other vessels pass by.

Before leaving, Sunderland had been given a personal beacon by one of NASA’s commercial partners, which was now her only chance to call for help. Less than 10 minutes after she activated the device, the signal was received, Sunderland’s identity and location were processed, her parents were contacted, and authorities began making arrangements for her rescue. A French fishing vessel, more than 400 miles away at the time, was directed to Sunderland’s precise location and picked her up. “I don’t think it could have been done any faster,” she says.

Because she was an adventurer looking to break a world record, Sunderland’s rescue brought a lot of attention to Cospas-Sarsat. Many other adventurers, whether pilots, sailors, or those climbing mountains or hiking in remote terrain, have likewise been rescued from a recreational trip gone awry. Nevertheless, most rescues—on average more than six people per day—involve fishermen, pilots, and others in remote areas who are putting their lives at risk in order to make a living.

“Sunderland is a great example of why you need this system, but the vast majority of those using it are people conducting their everyday business,” says Affens. “We get reports of these rescues weekly, and they are great stories.”

Today, 41 countries participate in the operation and management of Cospas-Sarsat, ready to respond to any one of the over 1 million beacons registered and in use worldwide. Between more ground stations—many of which to be built by TSi—and satellites that will be linked, the system will continue to provide a great deal of redundancy, which is a good thing for those receiving and interpreting distress signals.

Blankenship is happy that TSi has had the opportunity to be part of the ongoing project. “This is an example of something NASA does that, while important, is very low visibility compared to other missions. It might not make the front page, but on the other hand I’ve met some of the 30,000 people who have been saved by this system. And I can tell you that, for them, it’s a very big deal.

“Without NASA, they wouldn’t be here with us today.” 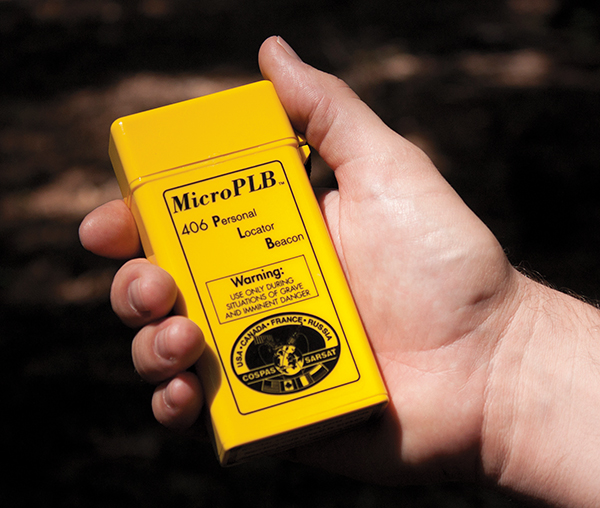 A 406 MHz personal locator beacon can be registered with search and rescue authorities. Registered beacons send more information to rescuers, helping them find those in distress more quickly. 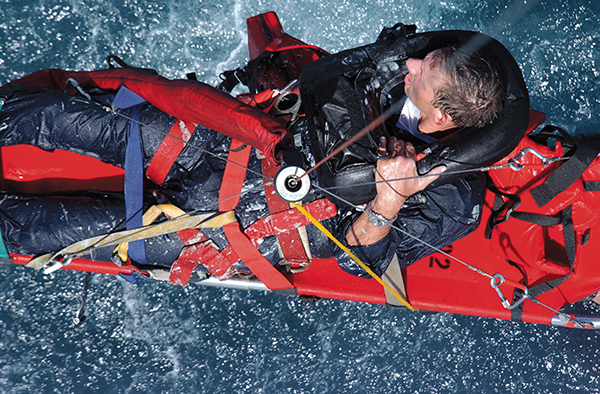 Thanks to Cospas-Sarsat, not only can rescuers be dispatched within minutes of receiving a signal, but they are deployed knowing exactly where they need to go. “We are taking the ‘search’ out of ‘search and rescue,’” says Dave Affens of Goddard Space Flight Center. 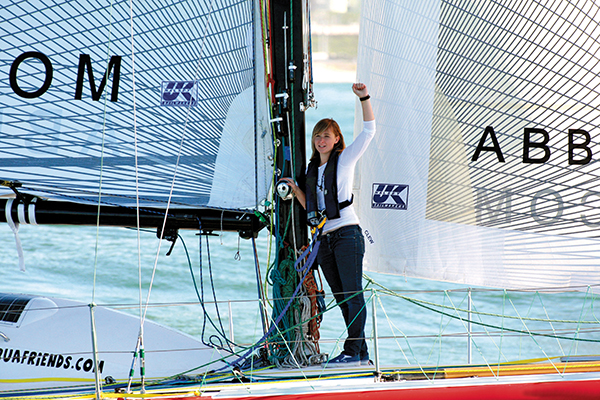 Abby Sunderland attempted a solo circumnavigation of the world in 2010, hoping to become the youngest person ever to have done so. When her boat was disabled in the south Indian Ocean and her satellite phone was not working, a personal locator beacon became her only chance to receive help. Image courtesy of GizaraArts.com

The Coast Guard runs a water rescue training exercise off the coast of New Jersey. “People often take for granted the risks that rescuers take on,” says Affens. “Anything we can do to minimize the area they have to cover, and the time they have to search, is better for them.”