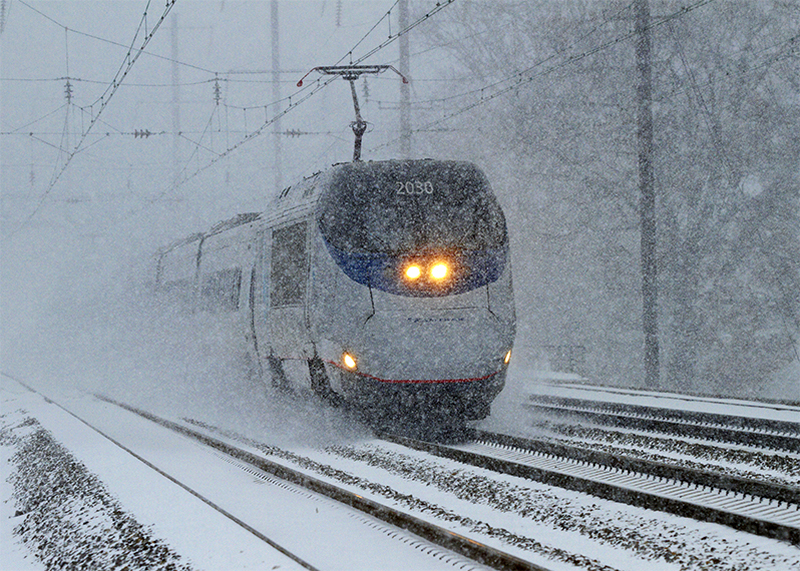 In the winter of 2009, Washington, DC, workers faced the prospect of a difficult commute due to record-setting snowfalls. But thousands of the city’s Metrorail riders found the public transportation system fully functional, thanks in part to a NASA technology invented years before.

Just like trains, an airplane must be snow- and ice-free to ensure safe travel. Traditionally, fluids containing a compound called ethylene glycol have been used to inhibit ice on planes. In 1992, however, the US Air Force banned its purchase of this ingredient due to toxicity concerns. According to the Centers for Disease Control, exposure to large amounts of ethylene glycol through air or water can damage the kidneys, nervous system, lungs, and heart. Urine samples from airport deicing workers have contained traces of the substance.

At the time of the Air Force’s ban, Robert Lockyer was working at NASA’s Ames Research Center in the Advanced Composites Model Development Branch, where he says “we decided to pick up the gauntlet and began researching existing fluid compositions and the processes used in deicing aircraft.”

Along with Lockyer, in 1997 Ames researchers Leonard Haslim and John Zuk devised a nontoxic, biodegradable, and cost effective substitute for ethylene glycol. When applied to a dry surface before a snow or ice event, the solution prevented ice from forming a bond with the surface. This made it easy to wipe away any accumulation.

A couple of years after Ames patented its innovation, a lab manager at Canton, Ohio-based Midwest Industrial Supply Inc. read about the formula being used on military aircraft. Thinking that it would greatly enhance existing anti-icing technology, the manager approached Ames to license the technology for commercial use. By 1999, Midwest began blending the NASA technology into an existing anti-icing agent, and also created a new product.

Since 1975, Midwest has been a provider of Earth-conscious solutions in the quarry, mining, construction, iron/steel, and rail/mass transit industries. Over the last 5 years, the company has appeared several times on Inc. magazine’s list of America’s Fastest Growing Private Companies.

One of the company’s original products, Ice Free Switch (IFS), remains successful today. IFS is a fluid that maintains railroad track switch operation in snow or ice. Railroad track switches transfer trains and equipment on and off of varying tracks. Shannon Noble, a sales manager at the company, says every track generally has at least two, and train yards usually have dozens of track switches. If snow or ice builds up on a component of a switch, a train has to stop until the buildup is cleared, causing delays and backlogs.

“It’s very important that switches operate flawlessly, quickly, and easily because there’s a lot of activity on them,” says Noble. “Even a little ice can prevent a switch from properly throwing.”

By incorporating NASA technology into IFS, Midwest improved the product in two important ways: The fluid is both easier to apply and more likely to remain on vertical surfaces. “Years ago, when you tried to get a formula to stay on the surface at very cold temperatures, it became too thick and hard to apply. If it doesn’t stay in place, it gives little residual value,” describes Noble.

IFS disrupts the freezing process of water molecules by placing “gaps” between the molecules. Any precipitation that falls will not turn into ice or build up on the surface of the treated area. Instead, most precipitation melts or becomes a soft-like slush. Due to this characteristic, IFS is known as an anti-icing agent rather than a deicing agent. “When dealing with winter operational issues, one approach is proactive, one is reactive,” says Noble. “The disadvantage with deicing is it requires 5 to 10 times more of a deicing chemical agent than anti-icing would initially require.”

Customers across rail markets are using IFS, including large interstate railroads, regional railroads, short-line railroads, mass transit railroads, and industrial plant and factory railroads. The product has also been applied to the walls of train tunnels, on train crossing arms, on the door tracks of boxcars, and in other areas where metal freezes and operation becomes problematic.

After improving IFS, Midwest began focusing on a new anti-icing product designed for the third rail of mass transit train tracks. For certain train systems, the third rail is the source of electrical power. As Noble explains, “Ice can glaze on the third rail, and if it gets thick enough, the metal contact shoe will lift off the third rail and ride on top of the ice. When that happens, the power supply is disrupted, causing stalled trains.”

To prevent disruption, Midwest’s Zero Gravity Third Rail product, based on the licensed NASA technology, stops moisture from becoming ice on the third rail. The product is automatically applied by a system attached to a train car, with a sensor detecting the location of the third rail. A spray nozzle alternates to the side with the third rail while the train is moving and delivers solution based on the train speed, pressure setting, and nozzle selection. “Every 4th, 5th, or even 10th train can apply the product with assurance that the third rail isn’t going to experience a problem,” says Noble.

By preventing moisture from becoming ice, Zero Gravity Third Rail helps prevent interrupted passenger service. Today, the biggest customers are mass transit authorities in cities like Washington, DC, New York, and Toronto. In 2009, when Washington, DC, had record-setting snowfalls, up to 41 delivery systems were employed on the city’s Metrorail to keep the third rails from freezing. Airports and hospitals have also used the product on passenger trains with a third rail, and steel mills have used it on cranes and other electrical power rails.

Depending on the severity of a winter season, the two products provide Midwest with an increase in revenue between $300,000 and $600,000 a year. In addition, the products have helped to prevent seasonal layoffs during Midwest’s typically slower winter months. For the public, the NASA-derived innovations are helping provide reliable train service, as well as supporting a cleaner environment and improved health. When used as directed, they are noncorrosive, nonconductive, nonflammable, and biodegradable—providing safe anti-icing and deicing alternatives for commuters, workers, and the environment alike. 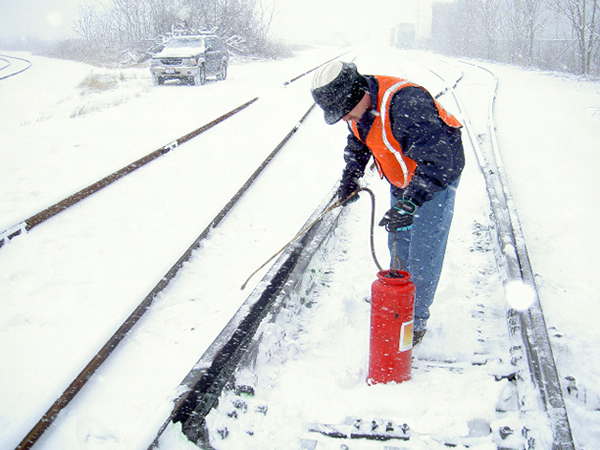 Train caught in a snowstorm