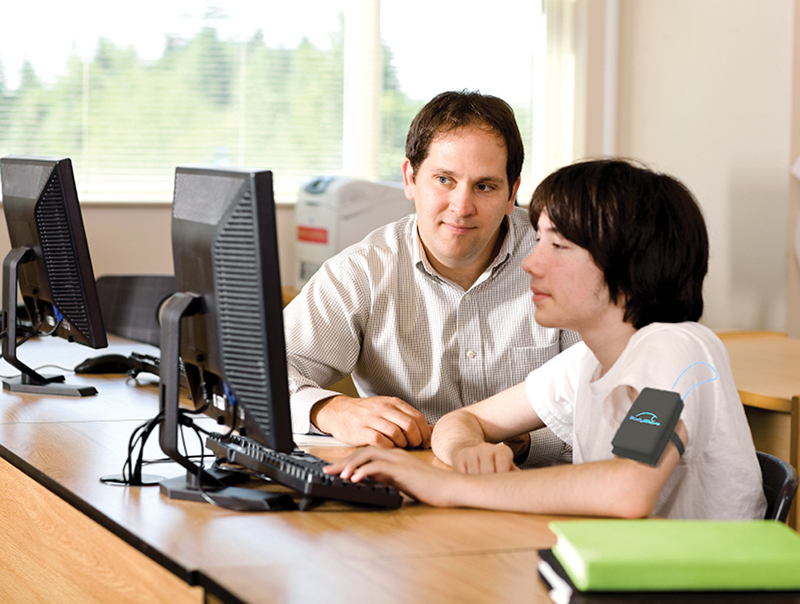 Imagine moving an object using only your mind. Software company Unique Logic’s Time on Task exercise makes that feat possible, at least on a computer screen. The game, which is designed to teach people how to sustain their attention in order to complete tasks, involves getting a forklift operator to transport a stack of crates from the ground onto the back of a big rig. It doesn’t seem like a particularly interesting plot, except for the fact that, instead of using a remote control to dictate the action, you’re using your concentration—measured by sensors that detect patterns of brainwave activity—to induce the operator to complete the job.

The inspiration for this attention-training game, one of many specialized software programs available under the company’s Play Attention educational product line, began with NASA Langley Research Center scientist Alan Pope’s research in the late 1980s on pilots and automated flight systems. Pope wanted to evaluate what degree of automation on flight decks was most beneficial. “Automation tends to free a person up to become bored and disengaged,” he says. “Our purpose was to figure out when automation goes too far, based on brainwave activity.”

To do this, Pope had pilots operate flight simulators that were installed on desktop computers. As they worked the controls, electrodes placed on their scalps gathered electroencephalographic (EEG) measurements, or neurofeedback, derived from electrical currents caused by neurons firing in the brain. The desktop simulator was programmed to react to the readings so that when a pilot was engaged, the degree of automation increased; a less engaged pilot prompted the simulator to increase manual controls. The experiment was the first example of what is now known as a biocybernetic loop system, which uses neurofeedback to influence the outcome of a computer program.

The methodology behind the experiment rests on the fact that electrical currents oscillate at various coexisting frequencies, with one frequency always being the strongest depending on a person’s state of consciousness. When a person is sleeping, delta waves—the slowest of all frequencies—are dominant. Theta waves, which are a little faster, are indicative of daydreaming. Alpha waves prevail in a relaxed and unengaged person. Beta waves, with the fastest frequency, correlate with a brain that is actively engaged in a demanding task. So the experiment, in essence, matched each pilot up with a degree of automation that induced those concentration-maximizing beta waves.

At around the same time as Pope’s pilot experiment, Peter Freer was teaching math and science, mostly to sixth graders. He found the job challenging for one important reason: Some of the kids, no matter the degree of stimulation, had a hard time staying focused. Freer, who had earned a master’s degree in education, pursued all the traditional tactics to reel them in: pull students closer to his desk so he has proximity control, start a reward program, give immediate feedback. None were very successful.

But something else also caught his attention. Whenever he would notice a student daydreaming, during breaks he’d ask him or her what was going on in class. He says that the answers he got were “phenomenal.” They could tell him about what the bird was doing outside the window on a tree limb. They could point out little details, like the cobwebs in the corner of the room, or they had figured out when the air conditioner would turn on and off. They could evenin on what people nearby were whispering. And then maybe they could mention a little bit about the day’s lesson.

This led Freer to the conclusion that people, on the whole, didn’t have a lack of attention; rather, their attention was simply diffused or scattered. “The issue is the brain’s inability to direct and sustain its attention at will,” he says. “It’s like taking a flashlight into a dark cave, and instead of looking at where you’re going, you’re just shining it all over the cave.”

Then he started reading about Pope’s research using a biocybernetic loop system. He got to thinking that if EEG measurements could help pilots operate at what he calls their “peak attentive state,” in which beta waves are the dominant frequency, then there wasn’t any reason why he couldn’t develop a similar software for helping students learn more effectively. “If I could take that technology, make it very simple to use, and then allow people to learn the skill sets that they drastically need—desperately need—then I would really have something.”

Soon after, Freer went about working three jobs so he could afford to hire a programmer and an engineer. In 1993, after 5 years spent on research and development, he founded Fletcher, North Carolina-based Unique Logic and Technology Inc. and released his Play Attention software series.

It all starts with learning how to sustain one’s attention, and that’s where the Time on Task forklift game comes into play. As mentioned earlier, the forklift driver won’t do his job unless the user is at peak attention. (As is the standard with other biocybernetic loop systems, Freer developed an algorithm that is used to detect this sweet spot of concentration where the beta waves are dominant.) The software gets the student accustomed to how these games work.

After that conditioning in is done, there are a variety of games to teach students how to hone a variety of skills, including social interactions, memory or visual tracking skills, or discriminatory processing. For example, with the memory game a student has to tap the arrow keys on a keyboard in the same sequence as a series of lights and tones that appear on the screen. But the game only advances when he or she is at a peak attentive state. “It works just like the Simon game,” Freer says, “but here we’re causing you to learn by grabbing your attention.”

In the 20 years since Unique Logic’s founding, Freer has continued to expand upon the ways that EEGs can be used to improve people’s lives. He has since founded Freer Logic, which offers software products—utilizing a variety of algorithms he has developed—that help with monitoring drowsiness, improving workplace and sports performance, and encouraging relaxation, just to name a few.

And the best thing about it all, according to Freer, is that you no longer have to wear those electrode-equipped helmets to monitor your EEGs anymore. His patented BodyWave technology uses a compact, armband-like device to do the same job. If you’re using an application in public, no one will know it.

As of 2013, Freer’s companies have grown to employ 38 people, and included among his many customers are NASA, the nuclear power industry, US Olympic sports teams, and NASCAR. Freer credits the Space Agency for inspiring him. “NASA has pushed the boundaries of the human experience off of this planet and into space exploration,” he says. “The innovations and new thought patterns developed as a result have come back and benefited virtually every person on this planet.”

PlayAttention® is a registered trademark of Unique Logic and Technology Inc.

BodyWave® is a registered trademark of Freer Logic LLC. 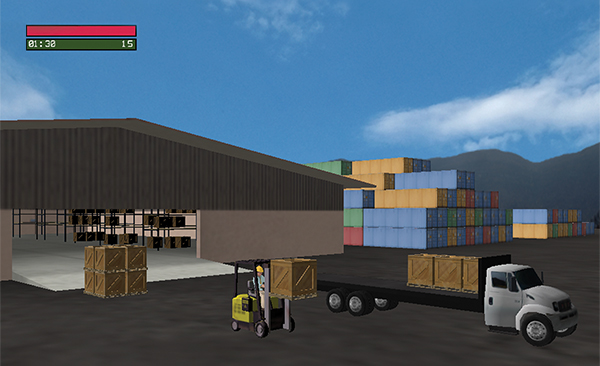 Unique Logic’s BodyWave technology (above) allows users to wear armbands instead of helmets to measure brainwave activity. In the Time on Task game (opposite), a user must focus his or her attention in order to move a stack of crates from the ground to the back of a big rig.