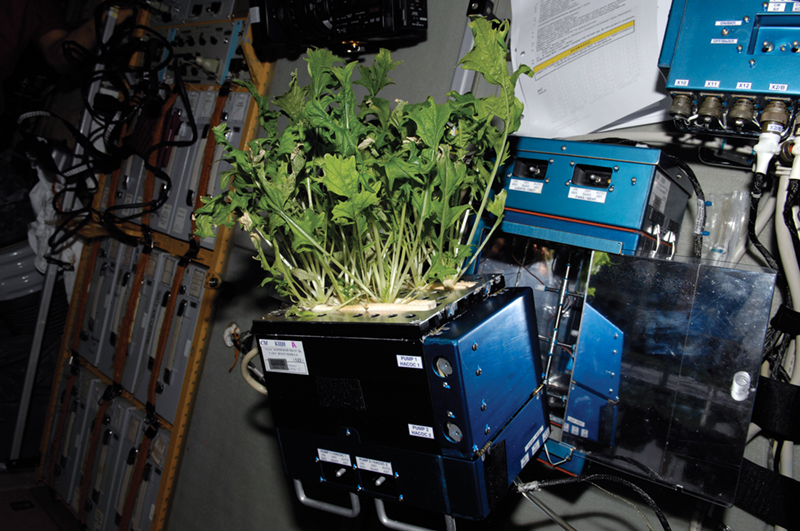 In the 1990s, NASA scientists were thinking of what astronauts would need to survive long-term missions to the moon and even to other planets in the solar system. One important requirement was a dependable source of food, which could be accomplished by astronauts growing their own produce in space-age greenhouses. But cultivating crops in a sealed-off environment results in the buildup of an undesirable gas called ethylene. Plants release the odorless, colorless fume into the air, which has the unfortunate effect of accelerating decay, hastening the wilting of flowers and the ripening of fruits and vegetables.

To address the problem, the Marshall Space Flight Center’s Space Product Development Program funded the Wisconsin Center for Space Automation and Robotics, located at the University of Wisconsin–Madison, to develop plant growth chambers that included an ethylene reduction device. In this device, called a “scrubber,” air is drawn into tubes coated with thin layers of titanium dioxide (TiO2). When an ultraviolet (UV) light source located in the tubes strikes the TiO2, the ethylene gets converted to water and carbon dioxide, both of which are beneficial for plants.

The ethylene scrubber was first used in 1995 aboard Space Shuttle Columbia mission STS-73, where it successfully preserved a crop of potato seedlings. Updated versions of the device were subsequently flown on several missions to the International Space Station.

While NASA’s main objective in developing the technology was to get rid of ethylene, the scrubbers were capable of purging all kinds of unwanted organic particles from the air. Recognizing its powerful air purification abilities, KES Science & Technology, based out of Kennesaw, Georgia, licensed the technology from the University of Wisconsin (Spinoff 2001 and 2002). The company then partnered with Jacksonville, Florida-based Akida Holdings, which marketed the technology as Airocide (Spinoff 2009).

In 2013, Airocide finally found its way into people’s homes when Akida Holdings adapted the technology foruse by developing an eye-catching portable unit with enough power to purge an entire room of pathogens.

TheAirocide unit made its public debut with an appearance on the Ellen Degeneres Show, immediately generating a great deal of attention for it. “It was a lot of fun putting that together and it was also great publicity for our product,” said Barney Freedman, who is vice president at Akida Holdings.

According to the company, Airocide is the only air purifier that completely destroys airborne bacteria, mold, fungi, mycotoxins, viruses, volatile organic compounds, and odors. And because of the technology’s versatility, the product is now used in a variety of settings. Grocery stores and produce distribution facilities now use it, in addition to a host of wineries, distilleries, and floral businesses. The device has also found its way into refrigerators that are used for both homes and for distributing food aid to remote towns. In hospitals and clinics, Airocide’s powerful germ-killing properties are on full display as it purges the air of harmful bacteria like methicillin-resistant Staphylococcus aureus (MRSA) and vancomycin-resistant Enterococcus.

TheAirocide unit has a sleek, glossy, rectangular body accented with orange-peel-colored inside walls. The product, which can either be mounted on a floor stand or hung on a wall, could easily pass for a modern work of art. But, beyond its aesthetics, according to Freedman, the product will change consumers’ quality of life. “You’re going to sleep better, and you’re going to feel better,” he says.

Freedman notes that Airocide works differently from High-Efficiency Particulate Air (HEPA) filters, which are designed to capture particles that are 0.3 microns across and larger. If the strings on a tennis racquet represent the best of these filters, he says, and marbles represent dirt particles, the racquet’s ability to capture them is how the filter collects dust. But if your aim were to capture particles smaller than dust—like viruses, bacteria, and volatile organic compounds—they would just slip right through the filter, as BB gun pellets would drop through a racquet’s strings. Not so with Airocide. “We’re able to eliminate those particles on contact,” he says.

Airocide is simple to operate—just plug it into an outlet, turn it on, then forget about it. The only upkeep required is replacing the reaction chamber, which houses the UV light source, every 12-14 months. There’s a high and a low-intensity mode, as well as automatic, which alternates from high in the day to low at night.

While the unit functions in any room, Freedman suggests putting your first one in the bedroom. With all the hours spent sleeping, it’s the most important space to keep clear of contaminants. “In two days, you’ll notice how the bedroom just feels different,” he says. “And as you get the chance to breathe in the air, you’ll start feeling better physically. You’re going to wake up feeling refreshed. You’re not going to be stuffy in the morning nor will you have any of the issues associated with air quality that you had before.”

According to testimonials shared on the Airocide website, people credit the product with helping them and their loved ones attain relief from symptoms associated with asthma, allergies, and sinuses. Freedman isn’t the least bit surprised by their claims.

“We know technology-wise that this device works,” he says. “It was developed by NASA, it’s FDA-approved, and it’s been tested and vouched for by a host of universities. Not to mention the fact that we’ve been selling this for 10 years. We’re very confident in what it can do.”

AiroCide® is a registered trademark of KesAir Technologies LLC. 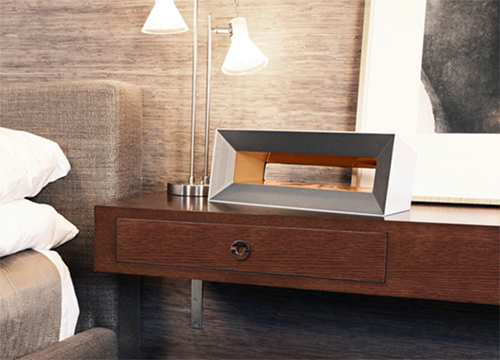 The Airocide unit can be laid on a flat surface, hung on a wall, or mounted to a floor stand.

Mizuna lettuce growing aboard the International Space Station before being harvested and frozen for return to Earth. NASA funded the development of Ethylene scrubbers to remove the plant-produced gas from the air, which help to keep vegetables fresh in space.