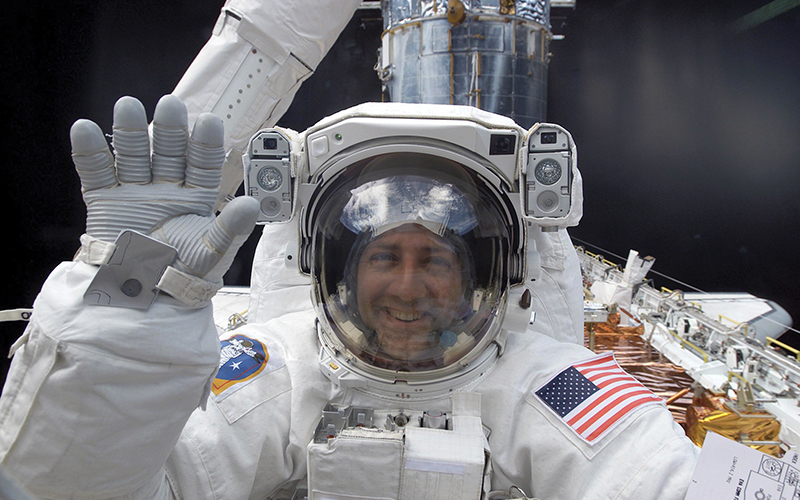 From the time he was a Boy Scout, Gihan Amarasiriwardena had a fascination with performance materials. While growing up in the northeastern United States, he experienced the drastic twists and turns of the changing weather and says he needed a variety of outdoor gear to accommodate the fluctuations. Being the innovator that he is, he says, “I got into making my own gear.”

In high school, Amarasiriwardena and his fellow Scouts would find their way onto construction sites where they would poke around for scrap pieces of Tyvek. They would take the materialand laminate it to ripstop fabric to make waterproof, breathable coverings. “I used to design waterproof jackets, climbing gear, and running apparel,” remembers Amarasiriwardena.

By the time he got to college, Amarasiriwardena’s passion for performance materials led him to pursue a degree in chemical and biological engineering at the Massachusetts Institute of Technology (MIT). There, he met students with similar interests, including Kevin Rustagi, who dreamed of innovative new product design in apparel; a classmate who sewed athletic socks into his dress socks to keep him comfortable (and stylish) throughout the day; and a colleague at MIT’s Sloan School of Management, Kit Hickey, who wanted her office clothing to be as practical as her climbing gear.

Rounding out Amarasiriwardena’s serendipitous group was Eddie Obropta Jr., a student working at the Man Vehicle Laboratory at MIT. Obropta was working on spacesuit designs for human travel to Mars, and had stumbled upon a technology that NASA had developed with industry many years before to help keep astronauts’ hands at just the right temperature while working in space.

More than two decades ago, NASA’s Johnson Space Center investigated phase change materials (PCMs) to use in spacesuit gloves. If the wearer became too warm or cool, the PCMs could automatically respond by absorbing or releasing heat. At a designated high temperature, PCMs absorb and hold heat to produce a cooling effect. At a designated low temperature, PCMs release stored heat to produce a warming effect in an area. Over the years, the NASA-derived PCMs have been applied to fabrics for a variety of uses, from bedding to undergarments (Spinoff 2009, 2012).

“When we became aware of PCMs to regulate body temperature,” says Amarasiriwardena, “we saw it as an amazing opportunity.”

In 2010, Amarasiriwardena and Rustagi joined forces to create a Boston-based company called Ministry of Supply (MOS). The name for the business came from a character in the James Bond movies who was based on a real person in the British Special Ops during World War II. Charles Fraser-Smith designed clothing and gadgetry for agents in the field, and his cover was British Ministry of Supply.

“We think of ourselves as creating the most advanced garments and gear for the Bonds and agents who we see as our customer,” says Amarasiriwardena.

MOS set about to develop a brand new product: a professional dress shirt for men that felt and acted like active apparel. Working with a supplier in Los Angeles, MOS created a unique synthetic fabric that not only incorporated NASA-derived PCMs but could wick away moisture and control odors and bacterial growth.

“We wanted material that could help your body stay in that comfortable band—stay warmer or cooler—as well as be styled as a dress shirt,” says Amarasiriwardena.

In 2012, MOS set out to raise $3,000 through KickStarter, an online platform for fundraising for creative projects, and the support started pouring in. By the close of its campaign, the team had raised a whopping $430,000 for its new dress shirt called Apollo.

Available in white and oxford blue, everything from the Apollo shirt’s fabric to its packaging is made in the United States. As a machine-wash only garment, the shirt will not wrinkle or absorb stains from perspiration. “Our goal is to inspire confidence in every man,” says Amarasiriwardena. “That means allowing him to look and feel great.”

In addition to the Apollo dress shirt, MOS has designed additional items for men, including an undershirt called Core, a short-sleeve shirt that can be worn alone or under another shirt called Atmos, and a pair of dress slacks called Aero.

Aside from using innovative materials , the company also employs innovative design and manufacturing techniques. “We are taking insight not only from the aerospace industry but from others, and we’re using it to help educate others about a new design process for fashion,” says Amarasiriwardena.

For example, MOS used strain analysis to understand how its material stretches, and as a result, where to place seams and stretch panels that help the shirts move with the wearer’s body and stay tucked into trousers. MOS also employs infrared thermal imaging to see where heat is generated on the body, and uses the results to inform its designs. The crisp collar and cuff on Apollo are made using a process called thermal lamination, and lastly, robotic knitting is employed to make vented sections in the garments during the manufacturing process.

“We are different from the rest of the fashion industry because we are not about releasing new products every season. We are about putting a lot of thought, engineering, and great design into each garment before we launch it,” says Amarasiriwardena. “We view ourselves as a sort-of Patagonia-J.Crew. It’s performance wear designed to be office-wear appropriate.”

Amarasiriwardena believes NASA’s mission is as much about what happens in space as it is about bringing that knowledge back to Earth. “What NASA has enabled us to do is a powerful part of its mission,” he says. “We’re pushing the boundaries and making a big impact back here on Earth.”

The Apollo and other MOS products are currently available on the MOS website, where, since its launch, has sold 12,500 tops and bottoms combined. The company expects even more success with some new styles coming in the future. 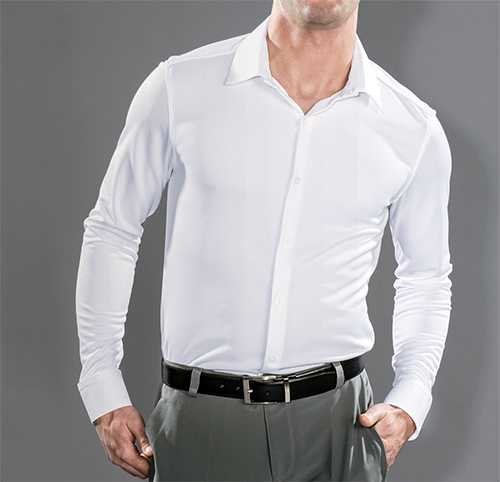 The Apollo dress shirt from Ministry of Supply incorporates NASA-derived PCMs, which absorb and release heat depending on temperature, to keep the wearer comfortable.

NASA Astronaut Michael Massimino waves at the camera during a spacewalk. While designing astronaut gloves, NASA looked at phase change materials (PCMs) to keep an astronaut’s hands from becoming too warm or cool.