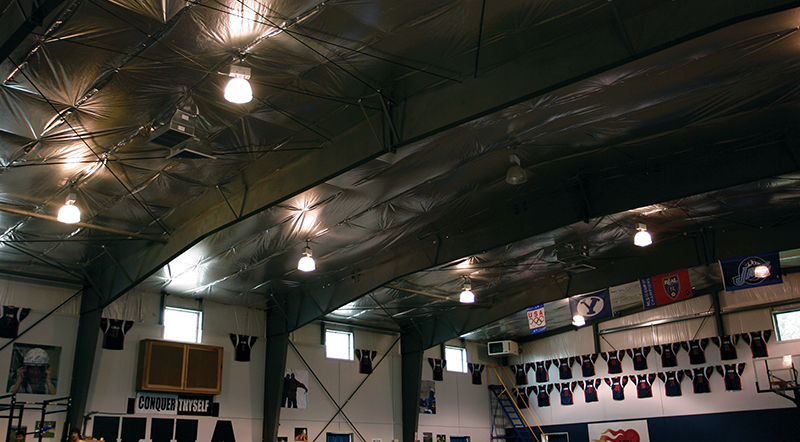 Radiant Barriers Save Energy in Buildings

That’s what researchers and designers at Langley Research Center nicknamed Echo I, the first NASA communication satellite to orbit Earth and successfully relay signals from one spot on the planet to another. As a round, 10-story tall balloon, Echo looked like it had been wrapped in smooth aluminum foil. With a silly nickname and odd appearance, you can probably guess: Echo has an interesting story to tell.

It was the 1950s, and Langley engineers were looking for a thin, lightweight, reflective material to incorporate onto Echo’s exterior to “echo” voice, radio, and television signals from Earth back to the ground. At the time, they were interested in using polyester (a plastic) coated with aluminum, but there were no existing techniques for applying the metal in a way that met NASA’s specific needs.

To create a new technique for coating plastics or other materials with an extremely fine mist of vaporized metal particles, the Agency collaborated with private industry. The result was a material similar in weight and feel to thin cellophane packaging, but with significant reflective properties. NASA utilized the technology on Echo, and in 1960 the satellite launched into orbit and successfully sent communication signals around the globe. Meanwhile, the vaporized metal technique also launched into success, and was used to create material for a myriad of space applications.

Alongside its ability to reflect communication signals, the material also reflected space radiation. It came to be known as “radiant barrier technology” and was used during the Apollo program to shield spacecraft and instruments from the harsh conditions in space. Since then, nearly every NASA mission has employed the shiny material to protect astronauts and equipment.

As the applications for radiant barrier technology took off in space, they also took off on Earth. The technology was made available in the public domain, and products across the world started incorporating the NASA-derived metallized material for everything from lightweight emergency blankets to insulation for homes and buildings. In 1996, the Space Foundation inducted the technology into its Space Technology Hall of Fame.

Recently, in 2010, entrepreneur Ryan Garrett learned about a new version of the radiant barrier that is manufactured by vapor phase encapsulation, a patented process from Sigma Labs in Tucson, Arizona. The difference between vapor phase encapsulation and the traditional technology is that, after the metal is vaporized, a coating encapsulates each particle of metal before it bonds to a material or fabric.

The big benefit, explains Garrett, is the oxidation factor. “There’s no penetration into the metal, and it is nearly impossible for the material to oxidize,” he says. In 2011, Garrett founded RadiaSource in Ogden, Utah, to share the benefits of the innovation with others through a unique product offering.

Garrett was already aware of the benefits of radiant barrier technology for insulating homes and buildings, but he was also aware of a significant drawback. Aluminum, the basis of the technology, has a .03 E-value, which means that it reflects 97 percent of radiant heat and absorbs 3 percent. The problem, describes Garrett, is that aluminum begins to oxidize when exposed to moisture.

To paint a picture of oxidation, Garrett uses the example of an aluminum travel trailer. “Over time, they turn dusty gray and lose reflectivity. It happens quickly when exposed to the elements. When the metal oxidizes, the thermal emittance of the material goes up. Once it goes up, it is not reflective anymore,” he says.

Thanks to what Garrett calls the “oxidation factor” manufactured into RadiaSource material, the company’s insulation products have a lifetime guarantee. A case study in Toronto demonstrated awith RadiaSource saved 18–20 percent on energy in the winter and 46 percent in the summer. When used on top of current insulation in a building or home, Garrett says, outside heat hits the material, and “It’s like water hitting a dam. It has nowhere to go.”

Aside from insulation, the company also produces radiant barrier garage doors, shipping materials, and wraps for water heaters. According to the company, RadiaWrap can save up to 20 percent on residential hot water heating costs.

With a variety of commercial opportunities in warehouses, gymnasiums, large buildings, and agricultural settings, RadiaSource insulation is currently being installed at a 2-million-square-foot poultry farm. The material is being incorporated in their livestock enclosures to save on the farm’s heating and cooling costs. “Temperature is an important factor to the development of chickens,” says Garrett. “Their growth rate, total body weight—all are impacted by temperature variations.”

Another area where Garrett sees beneficial use of RadiaSource is dairy farming. Cows produce milk at a certain temperature, he says, and fluctuation decreases milk production.

Still another industry is beekeeping. “Bees die when they are being transported because the temperature rises in the vehicles,” he says. “The bees flap their wings to cool down the hives, and they spend energy that could have been spent on making honey. If the temperature is regulated, honey production can go up.”

Considering the technology was enhanced more than 50 years ago for first-of-its-kind space applications, it’s no surprise it continues a legacy of unique applications here on Earth. As Garrett says, “We have to expand into space to continue to satisfy that craving to discover new things. In the process of trying to see what’s in space, we discover technologies that benefit us here on Earth.”

Abstract
Langley Research Center needed to coat the Echo 1 satellite with a fine mist of vaporized metal, and collaborated with industry to create "radiant barrier technology." In 2010, Ryan Garrett learned about a new version of the technology resistant to oxidation and founded RadiaSource in Ogden, Utah, to provide the NASA-derived technology for applications in homes, warehouses, gymnasiums, and agricultural settings. 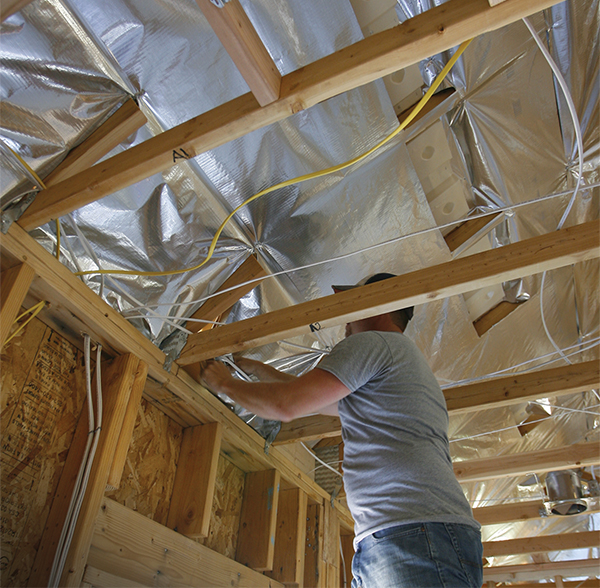 A spinoff technology called RadiaSource is installed in newly-constructed homes and buildings where it could save 46 percent on energy during the summer and 18–20 percent in the winter. 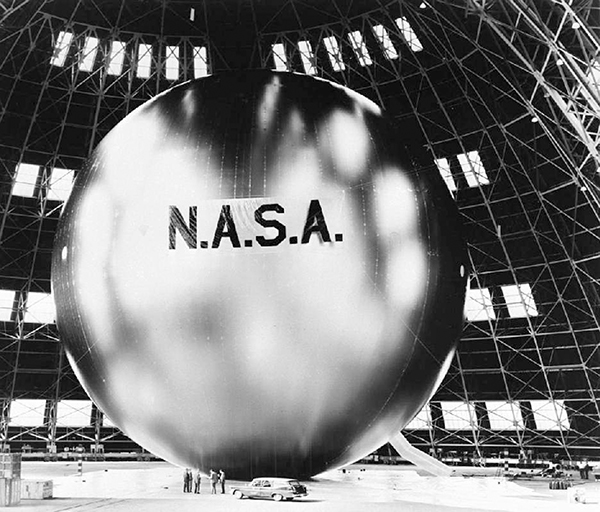 The Echo I satellite waits in a hangar in North Carolina before its 1960 launch. The metallic coating on the outside of the satellite later launched into commercial success.

A recreational gymnasium became too hot and uncomfortable to use during the summer months, but now with RadiaSource on the rafters, the owner says the gym stays cool. The image on the background of this page shows a close-up view of the perforated material.