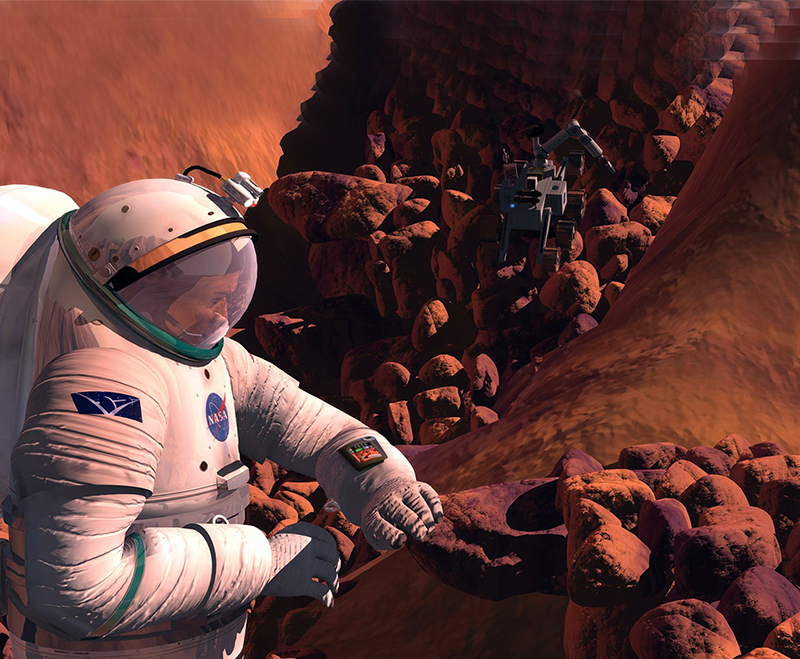 In a 1962 speech, President John F. Kennedy said, “We choose to go to the Moon in this decade and do the other things, not because they are easy, but because they are hard, because that goal will serve to organize and measure the best of our energies and skills.” And what a feat of engineering it was in 1969 when, after 4 days and 239,000 miles of rocket-powered thrust, NASA’s lunar module landed on the Moon’s surface, turning an important page in humankind’s progress.

Fast-forward to 2013, and the Space Agency has its sights set on another lofty goal: a manned landing on the Red Planet. “‘A human mission to Mars is today the ultimate destination in our solar system for humanity, and it is a priority for NASA,” said NASA Administrator Charles Bolden in a recent speech.

And what a page-turner that will be. Based on current technology, the best estimate is that it will take crewmembers 7-10 months before they land on Martian soil. For comparison, the Mars Curiosity rover took more than 8 months to complete its 352 million-mile flight path. And while the Curiosity mission is a marvel of engineering, a mission that sends humans to Mars will be an even larger challenge, because many innovations will have to be developed to ensure that astronauts have the necessary tools to survive what could be years spent in space.

One aspect critical to an astronaut’s long-term survival away from Earth is effective and efficient health-monitoring technologies. In space, there are no laboratories that can analyze blood samples in order to check for possible diseases or deficiencies.

In 2003, NASA scientists were already looking for a device that in one reading could register red and white blood cell counts as well as other substances, such as electrolytes, hormones, and other molecules. It also needed to be conducive to use in space. “We needed something that was miserly in terms of the resources it required, had a long shelf life, and was very light, adaptable, and portable,” says Emily S. Nelson, a senior research engineer at Glenn Research Center.

Unable to find anything “off the shelf” that fit the bill, Nelson says, “We came to realize we needed something specially designed to meet our requirements, so we identified our essential requirements and broadcast a call for solicitations.”

Answering the call was Cambridge, Massachusetts-based DNA Medicine Institute Inc. (DMI). Founded in 2008, the company specializes in developing innovative medical devices, and NASA’s solicitation fell within its expertise. That year, Glenn awarded Small Business Innovation Research (SBIR) funding to the firm, which went on to design the Reusable Handheld Electrolyte and Lab Technology for Humans (rHEALTH) sensor. It’s a compact, portable device that utilizes a battery of technologies to measure all of the substances NASA needed to monitor, in addition to other health-indicativebiomarkers such as antibodies.

The first critical components of the device are the microfluidic handling units, which are tiny channels that prepare the drawn blood for analysis by moving it through the device, which performs a series of tasks such as separating, diluting, and mixing various constituents. But unlike conventional blood tests, which use cartridges that must be discarded after every test, the rHEALTH sensor’s units, in addition to being more efficient, are also reusable, which cuts down on both costs and the volume of material that needs to be brought into space. Next is the device’s novel use of optical fluorescence technology, which can singlehandedly measure biomarkers, electrolytes, and analytes (biochemical substances) and also performs cell counts. The substance in question will glow if it’s in the sample, and its fluorescent intensity indicates how much of it is present.

The third major component of the technology is an example of big things coming in small packages. It was developed through separate SBIR contracts, the first of which was awarded the following year. In that round of solicitations, NASA Glenn sought proposals for a technology that had the potential to perform a massive number of tests simultaneously on a single blood sample, which no product on the market could do at the time.

DMI answered the call with its nanostrip reagents. “They’re kind of similar to urine analysis or pH test strips where you have a series of different pads for sensing analytes,” says Eugene Chan, the company’s founder and president. “The big difference is we’ve shrunk that technology over a billion-fold in volume so that we can implement that at the blood cell level.” Each individual nanostrip can perform a panel of blood tests, and it is also encoded with a fluorescent tag, similar to a bar code, that identifies which set of analytes are being measured. A set of multisensor nanostrips could then measure hundreds of biomarkers or more from one blood sample.

Nelson says the innovation is a game changer. “Once it’s fully developed, the DMI technology could permit more blood tests per sample than anything on the market,” she says. “It would also allow greater flexibility to define the types of tests that would be done, whether they are routine blood panels or novel biomarkers that are used for cutting-edge research. Chan’s pioneering innovations could bring revolutionary new capabilities to medical diagnosis and treatment, whether that’s in a clinical setting or in the emergency room or in space.”

With its low mass, efficiency, and versatility, the rHEALTH sensor is vying with other recently developed portable diagnostic devices for the right to be used for space medical research onboard the International Space Station (ISS). Scientists would like to collect data on dozens of biomarkers on the ISS to help better understand some of the biggest medical concerns for long-duration spaceflight, including immune dysregulation, bone loss, muscle atrophy, kidney stone formation, and visual dysfunction. The sensor has already been proven to work in microgravity simulations following tests done on parabolic flights, which mimic the weightlessness of space.

The rHEALTH sensor is also currently available for purchase by universities and research centers, and within the next year the company is expecting to get the product approved by the Federal Drug Administration for use in hospitals, clinics, and even homes. “We want to provide information for the masses,” Chan says. “With the device, people can measure their insulin levels, thyroid hormone and cholesterol levels, practically anything. And beyond just the variety of measurements is the time factor; from pin prick to results spans all of two minutes.”

“A lot of times you don’t want to wait for the central lab to get the information back to you,” Chan says, “or you might be in space where there’s no central lab or in the field somewhere in the middle of Africa. Having this high-powered test in the palm of your hand is what this is really all about.”

This technology is made possible, Chan says, with support from a forward-thinking agency such as NASA. “It takes that space-age kind of thinking to develop something that’s a breakthrough,” he says. “Ever since they’ve [NASA] demonstrated an interest in this, the general field has picked up. The Agency has really galvanized the whole sector.” 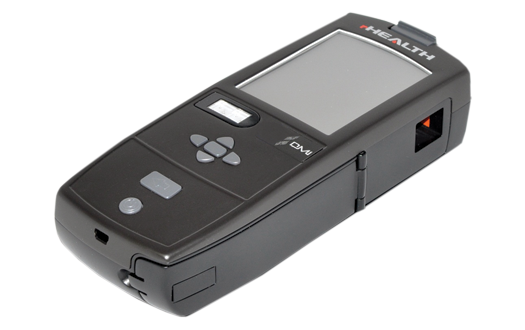 The rHealth sensor utilizes nanostrip technology to analyze dozens of biomarkers simultaneously. The device was also designed with efficiency and reusability in mind.

An artist’s rendition of an astronaut gathering samples on the surface of Mars. Long-term space missions would require that astronauts have access to remote health monitoring devices, like the Reusable Handheld Electrolyte and Lab Technology for Humans (rHEALTH) sensor.