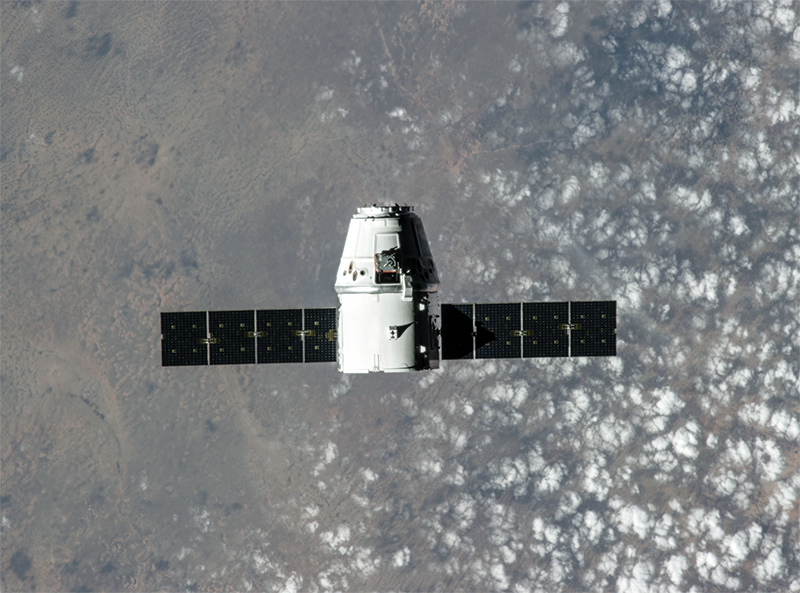 Comets are beautiful, and apparently it’s a youthful kind of beauty, because they look about the same from the time they were born. Often referred to as dirty snowballs, they’re composed of materials—rocks, dust, and frozen gases that emit their famous glow when vaporized by the heat of the sun—that were left over from the solar nebula after the planets were formed. Yet unlike the planets, comets haven’t changed much over these billions of years, and for this reason scientists believe they hold clues to the beginnings of the solar system. That was the inspiration behind NASA’s decision in the 1990s to send a spacecraft, aptly named Stardust, into the cosmos to retrieve samples of cometary matter for study back on Earth.

But before Stardust could begin its 3.5 billion-mile journey to the comet Wild 2, NASA needed new, innovative technologies to enable the mission. For example, Stardust would be returning to Earth faster than any manmade object before it, plunging into the atmosphere at speeds of 28,600 mph. Heat shields used in previous NASA missions were simply incapable of withstanding the blast of heat Stardust would create upon its return. Agency engineers looked at materials the Department of Defense had developed, but while durable enough they were too heavy.

Then one of the principal investigators for the mission, Ben Clark of Martin Marietta (now Lockheed Martin), found out about the Phenolic-Impregnated Carbon Ablator (PICA). Developed at Ames Research Center in Northern California, the PICA heat shield weighs one-fifth as much as its conventional counterparts and can withstand temperatures up to 5,000 °F. A key to the technology was using a ceramic carbon substrate for structural strength rather than relying on a polymer material to “glue” the material together. This traditional approach of gluing the material together with a polymer was used for the Apollo heat shield as well as those for all of the Mars lander missions up until Curiosity. The benefit of the ceramic substrate as opposed to the polymer is its hardiness—its ability to handle extreme temperatures without charring or melting. It seemed the perfect heat shield to use on Stardust.

Delivered on a shoestring budget in 1998, PICA was then quickly outfitted onto Stardust’s Sample Return Capsule, which, if all was successful, would return the cometary matter back to Earth for study. On February 7, 1999, the spacecraft launched into space and began its nearly 5-year odyssey to reach Wild 2. All the Agency could do was anxiously wait. “Because this was a discovery-class mission, we didn’t have the luxury of going through a very methodical, full-matrix engineering where you perform all these tests and make sure there’s no chance of failure,” says NASA engineer Dan Rasky, one of the originators of PICA. “We had to get something done with very modest resources, and on a very tight schedule.”

In the early morning of January 15, 2006, 7 years of apprehension would climax in the passage of what Rasky calls a few “white-knuckle” moments that began when the capsule plunged into the Earth’s atmosphere. On monitors it appeared as a large shimmering orb, and as it got closer to Earth, a tail, not unlike a comet’s, etched a radiant line across the sky. Soon after, its parachute opened, which braced the capsule for a soft, assured landing in Utah’s West Desert. “It was a high-wire act all the way,” Rasky says, “and everything worked out beautifully.”

The technology that allowed for the Stardust capsule’s safe landing would soon find another home, this time on the privately owned and operated Dragon spacecraft—which would go on to set a number of firsts for the emerging commercial space industry, an industry whose growth the Space Agency has set out to foster.

In 2002, Elon Musk founded Hawthorne, California-based Space Exploration Technologies Corporation, more popularly known as SpaceX, with the express purpose of revolutionizing space transportation, to the point where people could one day live on other planets. A more immediate opportunity presented itself in January 2006 when NASA, in preparation for the retirement of the Space Shuttle Program, put a call out for proposals under its Commercial Orbital Transportation Services (COTS) program, which would contract with companies to develop spacecraft that could deliver cargo to and from the International Space Station (ISS). SpaceX, which had begun developing the Dragon spacecraft a few years before, applied for and won a COTS contract later that year.

Having seen the Stardust capsule’s successful reentry, the company was very interested in the choice of PICA as a material for their heat shield. Fortunately, under the provisions of the contract, in addition to financial funding SpaceX also had access to NASA’s brain trust of engineers for technical consultation, which the firm made full use of. “The group of people we worked with had basically designed every American heat shield since the Apollo days,” says Andrew Chambers, the company’s project lead in this arena. “We were able to tap 40–50 years of knowledge and experience, which was absolutely invaluable.”

Over the next few years Ames and SpaceX worked closely with one another, and throughout much of 2008 Rasky worked half-time for SpaceX through an Interagency Personnel Assignment agreement. With this particular heat shield, Dragon’s designers would have to contend with a challenge that Stardust didn’t pose—size. Stardust’s Sample Return Capsule only required a PICA shield that was a little over 1 meter in diameter; to protect the much bulkier Dragon a 4-meter version was needed. With the 1-meter shield, Rasky and his team worked with Fiber Materials Incorporated to fabricate a single piece of PICA, but that wouldn’t be possible with the larger Dragon cargo transporter. To solve that problem they devised an efficient and cost-effective method for manufacturing smaller PICA tiles, which were then fabricated into a single heat shield.

Another area of synergy was the development of the Mars Curiosity rover, which was of similar diameter and also utilized a large tiled heat shield. Both design teams had to deal with many of the same challenges. While the Mars rover had a head start on production, the Dragon capsule flew first, although too late for any feedback into the Mars capsule that was already en-route. Fortunately, the heat shield worked flawlessly, providing much relief for those on both teams.

In December 2008 the company was ready to qualify their version of the heat shield material. Christened PICA-X, it was successfully tested at Ames’ Arc Jet Complex, where it was subjected to temperatures of nearly 3,500 °F, comparable to conditions it would experience upon reentry. Close cooperation with NASA was vital during this test series, as the Agency possesses one of the few facilities in the world that is able to create the sort of heating environment experienced by a spacecraft reentering, but even then it was only possible to test a 4-inch sample. The true challenge came at the end of Dragon’s 3-hour test flight on December 8, 2010. From Cape Canaveral, the company’s Falcon 9 rocket thrust the spacecraft into low Earth orbit, where it performed several maneuvers. Then it began its descent back to Earth. If things went according to plan, Dragon would securely parachute down into the ocean off the coast of Baja, California. This was another white-knuckle occasion.

“All this theory, all of this analysis, all of the speculation about how PICA would perform on a scale like this, it all came down to this one landing,” says Chambers. “You could feel the anticipation.”

The final act was over in a matter of minutes, once Dragon pierced the Earth’s atmosphere. The spacecraft withstood the extreme temperatures of reentry (which caused the capsule to glow white-hot), then deployed its parachutes and splashed down into the deep-blue waters. After its recovery 20 minutes later, SpaceX became the first private company in history to return a spacecraft successfully from orbit. “It was definitely one of the most exciting moments,” Chambers says.

Since its landmark reentry back to Earth, the company has hit other milestones. In May 2012 Dragon became the first commercial spacecraft to exchange cargo payloads onboard the ISS. On October 7 of that same year, Dragon performed its first official resupply mission to the ISS, delivering 882 pounds of vehicle hardware, crew supplies, and science-related paraphernalia. It’s one of at least 12 such missions the company is carrying out through the Agency’s Commercial Resupply Services contracts program.

On August 3, 2012, NASA also announced that, through its Commercial Crew Integrated Capability initiative, SpaceX was one of three companies awarded a contract to develop the next generation of spacecraft capable of sending humans into orbit. The firm had earmarked the Dragon for manned flights from the start, and the additional funding will allow for the development of life support and crew escape systems and onboard controls, all of which are necessary for human transport.

The company’s advancements haven’t escaped the notice of companies that have satellites operating in low-Earth orbit. The SpaceX Falcon 9 rocket—used to power Dragon—is available for commercial satellite launches. There are 50 launches planned through 2017.

The public-private partnership, says Chambers, has been a successful one. “If we look at the bigger picture than just the heat shield,” he says, “we have all these other collaborations with NASA, and it’s moving everybody forward. They have a wealth of resources and institutional knowledge, and because we’re a small dynamic company we have the ability to execute efficiently.”

Rasky from Ames agrees. “I honestly think it serves as a model for the way NASA can work with private industry going forward," he says. “If we work to support deserving commercial space companies, we can both succeed and do more together than we can separately.”

Abstract
The Phenolic-Impregnated Carbon Ablator (PICA) heat shield, a lightweight material designed to withstand high temperatures, was used for the Stardust reentry into Earth atmosphere. Hawthorne, California-based SpaceX later worked with the inventors at Ames Research Center to outfit PICA on its Dragon capsule, which is now delivering cargo to and from the International Space Station through NASA Commercial Resupply Services contracts program. 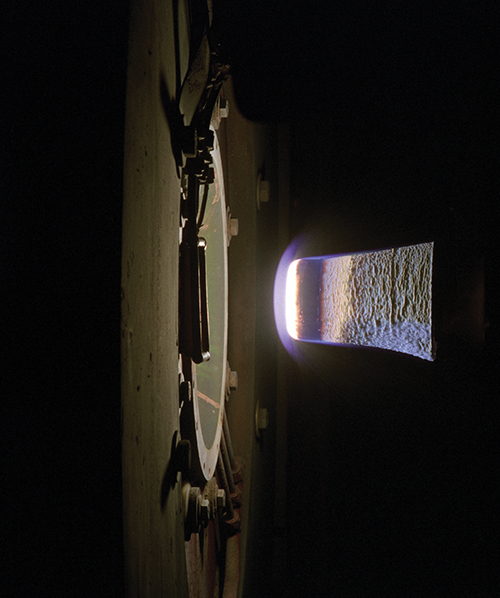 Ames Research Center’s Arc Jet Complex reproduces heating and pressure conditions similar to the flight environment spacecraft experience during atmospheric reentry. Here the heat shield material that would be used for the Stardust spacecraft is being tested for reliability in those conditions. 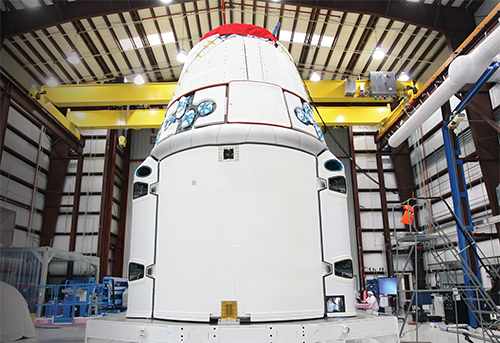 Engineers install PICA-X tiles on the first Dragon flight’s heat shield carrier structure (top). On December 8, 2010, the company’s Falcon 9 rocket propels Dragon into low Earth orbit for its first test flight (center), and, after nearly 3 and a half hours in orbit, the capsule is retrieved after a successful splash down into the Pacific ocean 500 miles off the coast of Mexico (bottom).

On March 3, 2013 crewmembers aboard the International Space Station snapped a photo of SpaceX’s Dragon spacecraft before it docked, delivering 2,300 pounds of cargo to astronauts. The capsule returned to Earth on March 26 with a larger 3,000-pound payload, which included returned science experiments and old equipment.