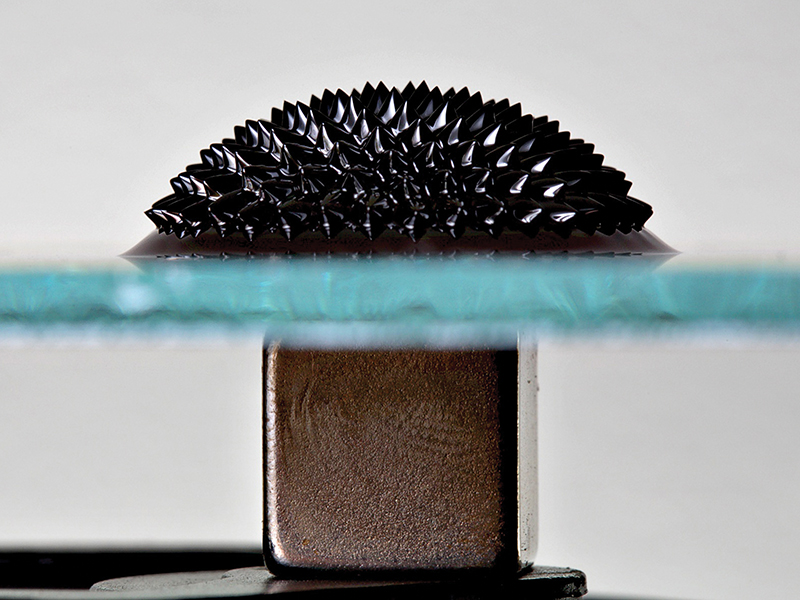 In the early 1960s NASA scientists were trying to work around a major problem for orbiting spacecraft: how to move fuel into an engine without the benefit of gravity. A scientist at Lewis Research Center (now Glenn Research Center) came up with a possible solution, which was to magnetize the liquid with extremely fine particles of iron oxide. That way, fuel could be drawn into the engine using magnetic force.

The quick advancement of solid rocket propulsion technology soon afterward precluded the need for what would be called ferrofluid technology, but it was considered again in the mid-1960s as a means to control a spacecraft’s temperature, which is very hot on the side facing the sun and very cold in its shadow. Scientists at Avco Space Sciences Division added their own expertise to the original NASA technology, developing a magnetic field that would draw the ferrofluid through a pipe ring around the spacecraft, stabilizing temperatures. Once again, an alternative solution was discovered and used instead.

But two scientists at Avco who were involved in the research, Ronald Moskowitz and Ronald Rosensweig, recognized the fluid’s potential and licensed the technology from the space agency. They formed Nashua, New Hampshire-based Ferrofluidics Corporation (later Ferrotec Corporation) in 1969, and began applying ferrofluids in a variety of applications (Spinoff 1980, 1981, 1993).

One of Ferrofluidics Corporation’s first uses for the technology was in the development of seals used in fabricating semiconductor chips for electronics. In production, aluminum is deposited on silicon wafers within a vacuum chamber, but in order to ensure an even distribution, the wafers are rotated by a shaft. Because contamination (such as air, mist, vapor, lubricant, or dirt) can ruin a chip, all the involved components in the process are sealed. Nonetheless, frequent leakages caused by the rotation resulted in revenue losses due to replacement material costs.

To fix the problem, the company manufactured a magnetic seal composed of ferrofluid and a magnetic circuit. The magnetic field traps the ferrofluid in a manner that seals in the spaces between the moving shaft and static components, eliminating leaks and saving on costly materials. From there, Ferrofluidics Corporation went on to develop many more applications, from thermal solutions and quartz fabrication to advanced ceramics, vacuum coating, and even loudspeakers.

In 2012, Sony Corporation, through in-house research, also integrated ferrofluid technology, this time into a commercial line of slim speakers, which the company says produces a louder, cleaner sound than others of comparable size. A key component is the micron-deep pool of ferrofluid that serves as a damper.

Speakers produce sound by sending alternating currents through a coil, which moves rapidly back and forth in relation to a permanent magnet. The coil’s movement vibrates the diaphragm, producing sound. A damper is typically a ring of any manner of materials, perhaps cardboard, paper, or silk, that fits around the coil to prevent it from wobbling and also to inhibit the diaphragm from blowing out. The downside of the damper, however, is that it can cause extraneous vibrations that can distort sound and lower overall volume capability.

Sony’s solution was to replace a solid damper with ferrofluid. The result, according to the company, is a better speaker. “The ferrofluid provides a free-flowing movement for the speaker to deliver sound without the vibration of a traditional damper, which minimizes some of the accuracy of the sound reproduction,” says Rob Manfredo, a communications specialist with Sony. “The lack of dampening also means you get three decibels more in volume.” The firm’s in-house research and development group also claims that efficiencies created by the fluid decrease energy use by 35 percent.

In a promotional video released by Sony, product specialist Gavin McCarron says the NASA-derived technology is helping make possible the company’s latest innovations. “The fact that you can get the speaker into a much, much smaller space allows you to create fantastic-looking TVs like the 4K models and also ourtheater range with slimmer speakers,” he says. “But [because of ferrofluid technology] you’re still getting a much wider sound field with more hi-fidelity noises. And also, you can turn the volume up and you won’t get any distortion.”

An example of how well ferrofluid performs when packaged with the company’s other advanced sound technologies, says Manfredo, occurred in a demonstration of Sony’s new high-end sound bar, the HT-ST7, in a large screening room. “We screened the movie Elysium in this 60-seat room, and we only used the HT-ST7,” he says. “It just filled the room with sound. That’s just seven small speakers using this technology.”

In 2013, Sony, with US headquarters in New York City, was rated one of the topaudio retailers by sales in the country, says Manfredo. While he notes that not all of the company’s successes can be attributed solely to ferrofluid, he does think that investment in the technology has made a difference in what the company can offer. “If people value an attractive, aesthetic design, good performance and a small footprint, which it seems is the case,” he says, “then clearly it’s doing its job.” 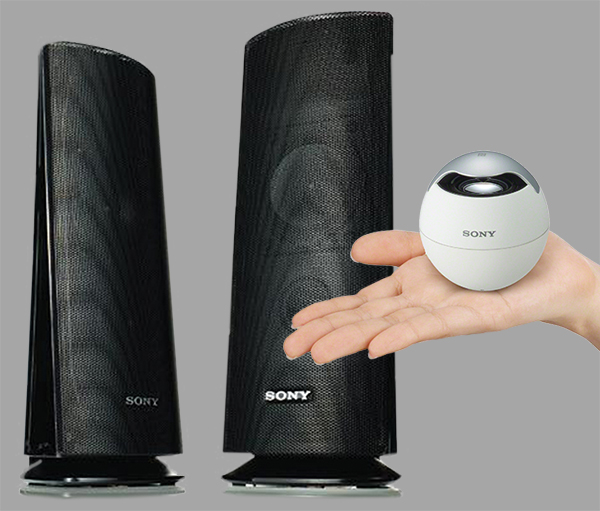 A magnet shapes ferrofluid from underneath glass. In the 1960s NASA developed the magnetic liquid technology as a way to move a spacecraft’s fuel to its engines. Image courtesy of Gregory Maxwell