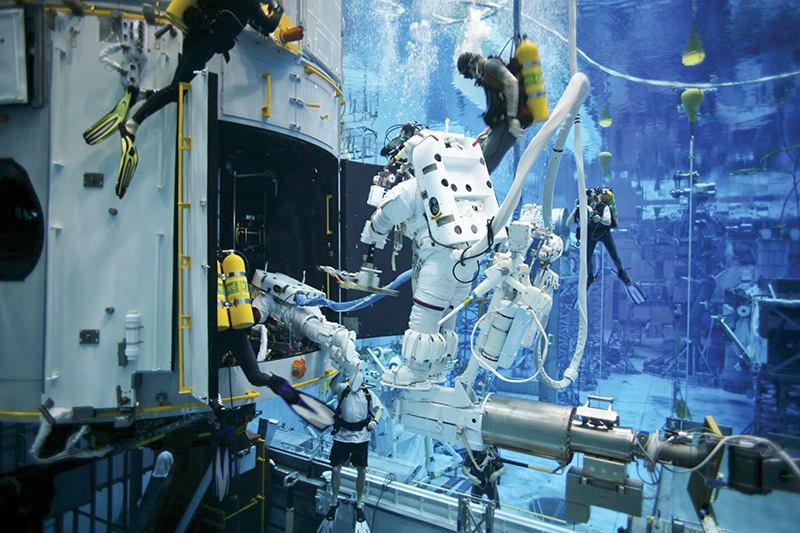 In addition to teaching crewmembers to perform crucial tasks like using their spacecraft’s technical devices, piloting a vehicle back into Earth’s atmosphere, and landing a shuttle or capsule, major portions of NASA’s astronaut training simply teach how to survive and carry out basic tasks in an environment where the dangers and basic physics are completely altered from those of terrestrial life. These lessons are based primarily on the collective experience of everyone who has gone before.

Jack James, who spent 15 years involved in astronaut training at Johnson Space Center (JSC) and is now in the center’s Technology Transfer Office, tells a piece of astronaut lore from the early days of space travel: because pens don’t work without gravity to pull the ink down, a pressurized pen has to be used. The Russians avoided the problem by using pencils. The pencil shavings, however, posed a potential hazard, in that an escaped shaving could be inhaled or get in someone’s eye.

“You’ve got to understand, you can’t just do whatever you do down on Earth,” James says. “When you fly somebody, you want to prepare crew members and eliminate unexpected situations as much as possible.”

At JSC, where the bulk of NASA astronaut training happens, trainers specialize in every aspect of operations and daily life in space, and all returning crewmembers debrief with each of them, sharing the ways their experience departed from their training. Those interviews are used to refine future training, teaching astronauts how to carry out even the most ordinary activities, such as eating, bathing, and using the bathroom, James says.

A number of sophisticated systems are used to simulate the experience of space travel. Parabolic airplane flights to simulate weightlessness, centrifuges to replicate the g-forces of takeoff and reentry, and underwater “neutral buoyancy” operations have long been training mainstays.

Virtual reality software is now a common tool in NASA’s training regimen, and NASA software developers have developed and built on a variety of simulation programs. Two of those programs—Trick Simulation Environment 07 and Engineering DOUG Graphics for Exploration, wherein DOUG stands for dynamic onboard ubiquitous graphics—were recently acquired from NASA through a General Public Release Software Usage Agreement by a new company that plans to open up astronaut training to the general public. Waypoint 2 Space, which is setting up a 15,000-square-foot training facility near JSC, plans to offer its seven-day, level-one training to 300 people in groups of 4 to 12 in its first year. The company hopes to open its doors in spring of 2015.

The company is one of the first to receive a safety approval from the Federal Aviation Administration’s (FAA) Office of Commercial Space Transportation to offer commercial astronaut training. The approval, granted in early 2014, was based on Air Force, NASA, and FAA criteria and includes approval to train instructors, according to a release on the Federal Register.

The training was developed from firsthand knowledge of spaceflight operations and training, as the staff includes a handful of former NASA personnel and contractors. Among them is Kelly Soich, director of programs and chief payload specialist for Waypoint 2 Space, who is in charge of the company’s training curriculum. Soich supported Extravehicular Activity training and evaluation of astronauts for NASA and was also a flight lead in the mission evaluation room for more than 60 spacewalks.

“It’s really a collective of commercial and NASA people blending together to get something that’s effective,” Soich says.

Those who attend this first level-one training—“the Elite 300,” as Waypoint calls them—won’t be trained in the Russian language, but they will learn about everything from how to prevent fainting due to accelerated g-forces to how to don and carry out operations in a pressurized space suit and how to negotiate Martian or lunar terrain using analog simulations. Other subjects include conflict and stress management, oxygen deprivation symptoms and recovery, flight dynamics, orbital mechanics, and how to maneuver in microgravity, to name a few. The course uses vehicle mockups, software, and other technology in its simulations.

“Our level-one is open to anybody,” Soich says. “If you have an interest in space, we’d love you to go through it.”

The three-day, level-two sub-orbital course and the 8- to 12-week, level-three orbital course haven’t been priced yet, but those are planned to be reserved for clients who already have a ticket to go into space. The wait list for the third level is expected to open in 2015.

Waypoint 2 Space also offers its services to anyone sending a payload up on a commercial flight. These services can range from consultations on how to meet FAA requirements and ensure the success of experiments in space to accompanying a payload and carrying out experimentation in orbit.

Soich notes that putting a payload in space can cost hundreds of thousands of dollars. “Three to four minutes in suborbital gravity is a pretty expensive investment to comewith no results,” he says.

Not all 300 of Waypoint’s first trainees are likely to go into space, and, as people continued to enroll in the spring of 2014, Soich said many were simply buying the experience.

“We have folks who are just intrigued and want to be part of the space legacy,” he says. Others, however, are considering a trip into space.

Anyone traveling to the ISS would have to train with NASA, just as a payload sent on a NASA mission would have to meet the agency’s requirements, but Soich expects the commercial presence in Earth’s orbit to grow considerably in the coming years. He’s not alone. As a couple of companies have started launching rockets to carry payloads to the ISS, dozens more are gearing up for space operations, including tourism and mining. Bigelow Aerospace has designed what it plans to be the first commercial space habitats. Anyone going on these missions would require training to meet FAA requirements.

“We would be the pathway for training somebody to go up on Bigelow and operate, for example,” Soich says. Thanks to FAA approval, anyone certified by Waypoint wouldn’t have to have their training vetted.

“I think we’re probably a decade out from a continued commercial presence in orbit,” Soich says, adding that, at that point, the industry could take over the sort of operations NASA carries out on the ISS, while the agency could focus on its campaign to push its work beyond Earth orbit and toward Mars. He compares this transition to the commercialization of mail delivery or passenger flight.

As it sets about developing training for the pilots, flight attendants, and vacationers of tomorrow’s aerospace industry, Waypoint 2 Space has about a dozen full-time workers and 20 or so others that it reaches out to as regular consultants. In the spring of 2014, the company was vetting customers, working to transfer technology from NASA, and trying out hardware and training programs on about six “test case” trainees.

“It’s really a fun project because the excitement is there, and every day you come in to work and it’s something new,” Soich says. “It’s really like the Wild West in a lot of ways.” 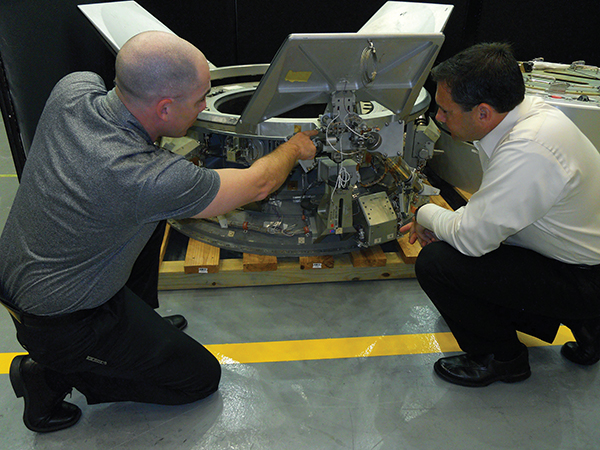 A Waypoint 2 Space payload specialist trains a researcher on how to package and prepare a payload. The company offers payload services, from instruction on how to meet Federal Aviation Administration requirements to accompanying payloads and carrying out experimentation in orbit.

Underwater “neutral buoyancy” training has been integral to the astronaut training developed at Johnson Space Center since the mid-1960s. Now the company Waypoint 2 Space plans to capitalize on the knowledge of former NASA trainers to bring astronaut instruction to anyone willing to pay for it, and especially those who will actually travel into space.