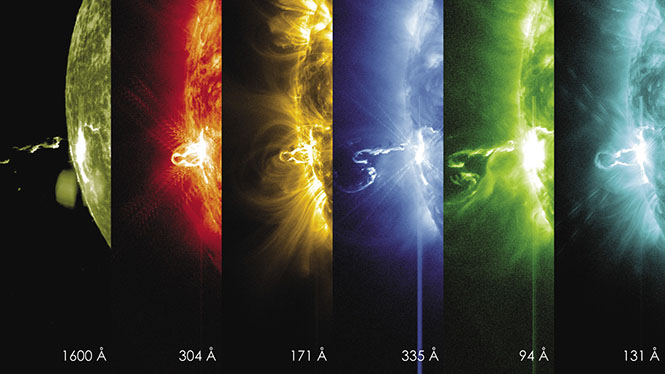 To the casual observer, the sun appears as a steady, static, glowing ball of heat. But closer inspection reveals our closest star can be rambunctious, capable of emitting powerful, sudden bursts of energy and radiation that can impact life on Earth. Coronal mass ejections (CME), for example, are bubbles of gas and magnetic fields that explode outward at rates of several million miles per hour. If directed at Earth, a CME can cause geomagnetic storms that interfere with high-frequency radio communications and disrupt electric power grids.

In order to further understand the sun’s impacts on Earth, in 2001 NASA initiated the Living with a Star program and soon after began developing a key research satellite: the Solar Dynamics Observatory (SDO). The SDO would be outfitted with a suite of onboard instruments that could provide both real-time, high-definition images of the sun’s atmosphere and measurements of both its magnetic field and its output of varying radiation. The data gleaned from the satellite would go toward developing forecasting methods that could help prevent disruptions.

One of the instruments created for the SDO was the Extreme Ultraviolet Variability Experiment (EVE), tasked with measuring extreme ultraviolet (UV) radiation, which plays a key role in atmospheric heating and satellite drag. If left unchecked, such radiation can send spacecraft plummeting toward Earth. In 2005 Goddard Space Flight Center scientist Shahid Aslam joined other researchers, headed by Tom Woods of the University of Colorado Boulder’s Laboratory for Atmospheric Space Physics, in developing EVE.

A focus of Aslam’s work was experimenting with different ways of measuring extreme UV radiation. Silicon semiconductors have been used traditionally as detectors, but a drawback is they take in both UV and visible light. Filters are used to isolate the ultraviolet signal, but the results aren’t ideal, he says. “Every time you apply a filter, you get transmission losses, so it becomes tricky.”

To sidestep the filtration process, the team looked into what are called wideband gap semiconductors: chemical compounds that detect a narrower range of wavelengths on the electromagnetic spectrum. In particular, the team worked with compounds that detect only UV light. “We were no longer contaminating our signal with radiation we were not interested in,” Aslam says.

The team made great strides with the novel semiconductor technology, and although it wasn’t integrated into the SDO, the team’s findings were published in peer-reviewed journals, and the agency filed a few patents. For his part, Aslam would take the knowledge he gained from working on wideband gap semiconductors and apply it to an entirely different industry.

It was early on in the project while experimenting with different compounds that Aslam noticed that a few of them detected bands of wavelength in the UV spectrum that held special significance for human health. “I was thinking, wow, we're detecting radiation between 280 all the way to 400 nanometers in wavelength,” he says. “This is exactly where you have biological effects due to sun exposure.”

Of the many types of UV light, UVA, which ranges from 400 to 320 nanometers, and UVB, present in the 320- to 280-nanometer territory, play important roles in health since their rays can pass through the atmosphere and make contact with Earth’s surface. Whether they’re friend or foe depends on the amount of exposure: Our bodies need UV light to produce vitamin D, critical to building bone density and supporting brain and immune system function, but too much sunlight can cause sunburn, premature aging, and skin cancer.

To gauge how much sunlight is too much, scientists have developed what’s known as the erythemal UV index, which highlights the durations at which UV wavelengths, when set at certain power quotients, will likely cause erythema, or reddening of the skin due to inflammation. Wouldn’t it be great, Aslam thought, to develop some kind of device that measures UV exposure in a way that allows people to manage their daily sun intake?

He brought the idea up with fellow squash player and marketing guru Karin Edgett, and the pair agreed to move forward with developing the product. In his spare time away from Goddard, Aslam began working on the technical development, which included formulating algorithms and homing in on a proficient detector compound; Edgett tackled marketing and branding. Their resulting concept—a UV light-detecting activity monitor—received recognition in 2011 when it won first place in the consumer products category in NASA Tech Briefs magazine’s Create the Future Design Contest.

Buoyed by the initial reception, the pair formed Sensor Sensor LLC and moved forward with further development and crowd funding. In April 2014, after receiving positive reviews in trade shows the previous year, the UVA+B SunFriend was put on the market.

UVA+B SunFriend activity monitor comes at a time, Edgett says, when one in five people in the United States will get skin cancer in his or her lifetime, making it the most common form of cancer in the country. On the flip side, in some regions of the world—Scandinavia, for example—vitamin D deficiency is considered a pandemic. “This product provides a way to optimize the Vitamin D synthesizing process up to a maximum dose and before it starts causing cellular breakdown,” she says.

To use SunFriend, a user first selects his or her level of skin sensitivity on an 11-point scale, with 1 indicating the highest level of sensitivity and 11 the lowest, reserved for very dark or sun-tolerant skin types. The device is then worn face-up on the wrist and left uncovered.

Throughout the day, as UVA and UVB light hit the embedded semiconductor compound, it produces photocurrents indicative of how much radiation is coming in. A microchip processes that current, taking into account radiation strength, the ratio of UVA to UVB light, and the selected level of skin sensitivity. When the maximum recommended daily dose of UV light is reached, the LEDs on the face of the device will flash. Aslam says, “At that point you apply sunscreen, go indoors, or put on clothing.”

When first using SunFriend, it may take a few tries to settle on the right skin sensitivity number, Aslam says. “If your skin is already red when the SunFriend flashes, you need to lower the number.” However, once it’s set to the right number, it can be used without fuss year-round.

While the benefits of using the technology to prevent overexposure are apparent in the summer, during winter people can run the risk of not getting enough sun, which can lead to vitamin D deficiency, followed by depression, according to Aslam. “This is one of the phenomena we’re facing in northern-latitude countries like Finland and Sweden, where there are very high suicide rates. All the research shows that lack of sunlight plays a key role.”

While SunFriend is still very new to the market, the company is already working on increasing its functionality, such as implementing Bluetooth technology so that information can be communicated to users’ smartphones for record-keeping and statistics.

Aslam says such an add-on would be a clear step in the right direction. “People are now taking control of their vital statistics,” he notes. “Everyone wants to track how many calories they’ve burned, their heart rate, blood pressure, blood sugar levels. The same should be true about the amount of sunlight they’re getting. It’s just as important.”

Abstract
Goddard scientist Shahid Aslam was investigating alternative methods for measuring extreme ultraviolet radiation on the Solar Dynamics Observatory when he hit upon semiconductors that measured wavelengths pertinent to human health. As a result, he and a partner established College Park, Maryland-based Sensor Sensor LLC and developed UVA+B SunFriend, a wrist monitor that lets people know when they_ve received their optimal amounts of sunlight for the day. 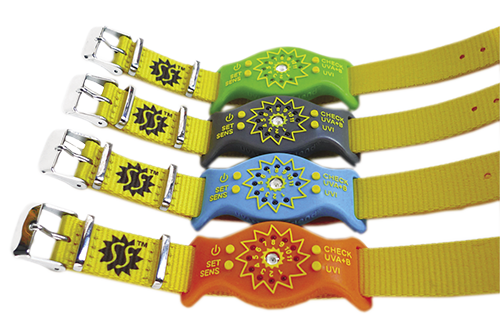 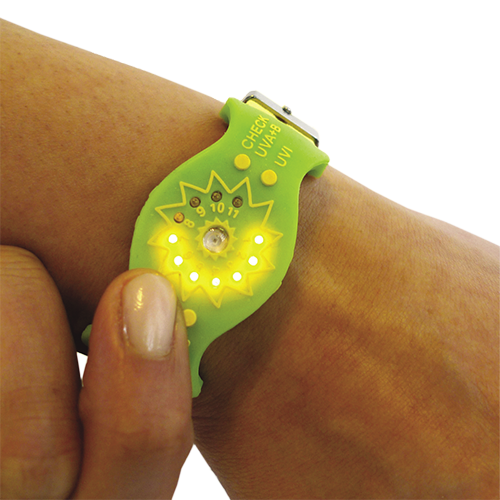 Inspired by his work on EVE, Goddard scientist Shahid Aslam conjured up the idea for what is now UVA+B SunFriend, a UV light-detecting activity monitor that informs people when they’ve reached their maximum recommended daily dose of sunlight.

On February 24, 2014, NASA’s Solar Dynamics Observatory (SDO) captured an X-class solar flare in different wavelengths of light, including ultraviolet (UV). One of the SDO’s instruments is the Extreme Ultraviolet Variability Experiment (EVE), tasked with measuring extreme UV radiation, which plays a key role in atmospheric heating and satellite drag.