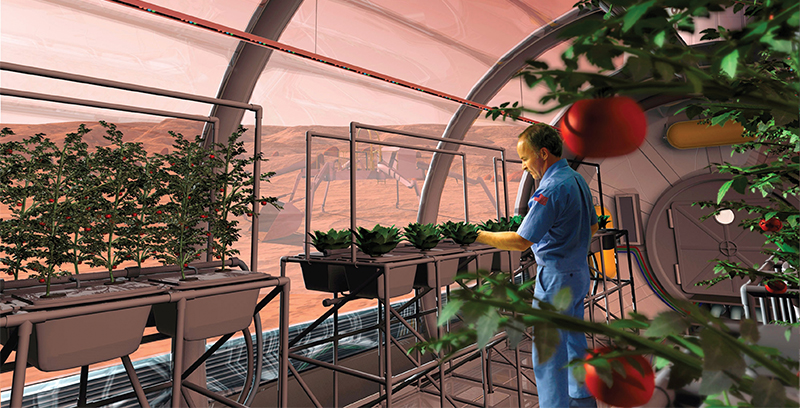 Charged Particles Kill Pathogens and Round Up Dust

Before astronauts are able to undertake long-term missions into the solar system, they’ll need technologies that allow them to grow their own fruits and vegetables. For years, NASA has been advancing technologies such as artificial lighting, plant monitoring devices, and growth chambers to advance that goal.

But it’s one thing to grow plants; it’s another to keep them from aging prematurely. The culprit is ethylene—a naturally occurring gas emitted from plants that hastens ripening. Comprised of hydrogen and carbon, ethylene can induce decay when left to accumulate in enclosed spaces such as a spacecraft. To forestall that process, in the 1990s the Wisconsin Center for Space Automation and Robotics, a NASA Research Partnership Center located at the University of Wisconsin–Madison, developed an ethylene reduction device.

Also known as an ethylene “scrubber,” the device works by drawing in air through tubes coated with titanium dioxide. When a built-in ultraviolet light shines onto the coat, the gas is converted into trace amounts of water and carbon dioxide, which are actually good for plants. The scrubber was first flown on Space Shuttle Columbia mission STS-73 in 1995 and proved successful in preserving a crop of potato seedlings. Subsequent missions used and improved the technology.

In addition to converting ethylene into harmless byproducts, the scrubber was also found to kill pathogens. As a result, a line of air purification systems utilizing the technology is now on the market that not only keeps food fresh in warehouses and markets but also helps decontaminate the air (Spinoff 2002, 2009). Consumer versions of the system for thealso followed (Spinoff 2013).

Another company, Electrolux (now Dallas-based Aerus Holdings), of vacuum cleaner fame, also furthered the technology but took it in a slightly different direction. Rather than cleaning passing air, the company’s family of air purification products does something unique: it takes the circulated air generated by a building’s heating and cooling ventilation (HVAC) system and produces molecules that disseminate into the environment, killing pathogens in the air and on surfaces.

Called ActivePure Technology, and commercially available since 2013 as the Air Scrubber Plus, the key to its function is a proprietary blend of reactive metals added to the original titanium dioxide coating. When exposed to ultraviolet light, these metals mix with the surrounding air and humidity to produce charged clusters of hydrogen and oxygen such as hydrogen peroxide, hydroxyls, and superoxide ions, which are antimicrobial agents also found in nature. “We call them friendly cleaners,” says Air Scrubber Plus executive director Tom Lozano. “They go out and reduce contaminants throughout an entire home.”

What’s more, these “friendly cleaners” are also mostly negatively charged ions. The majority of particles around the house are positive, so these ions pull these particles from the air, greatly reducing loose dust and pollen. The Air Scrubber Plus is also available in models equipped with ozone, which greatly enhances the device’s ability to combat strong odors from pets and cigarette smoke.

In another study the University of Cincinnati validated the technology’s ability to extract particulate matter. “These ions were dropping particles out of the air 100 times faster than relying on gravity alone,” Lozano says. “That’s a good thing because it means you’re not breathing them in anymore.”

While the company is careful not to make any medical claims, Lozano mentions some of the many positive responses he’s received from customers. In one story, a woman was so allergic to cats that she wasn’t able to stay at her daughter’s house for longer than 30 minutes at a time. One day, her husband installed an Air Scrubber Plus without her knowing. “On Super Bowl Sunday, she’s hanging out at her daughter’s for four hours and says, ‘Hey what’s going on?’” he says. “She was surprised by how well she was feeling.”

Besides making people feel better, Lozano says the technology also helps extend the life of a home’s HVAC system. As particles clump around the charged clusters, or “friendly cleaners,” they become too large to escape the system’s filter, which means they’re not able to go on and damage coils and blowers needed to help keep the system running effectively. “This translates to savings on your utility bills and reduces the chances of needing expensive repairs,” Lozano says.

And it all started with the agency’s need for keeping plants fresh in space. “NASA is to thank for laying the foundation for a breakthrough product in indoor air quality,” Lozano says. “The Air Scrubber Plus is really improving people’s lives.”

Abstract
To keep plants fresh longer in space, Marshall Space Flight Center awarded funding to the University of Wisconsin-Madision to develop a titanium oxide-based device that reduced the amount of decay-inducing ethylene gas in the air. Electrolux (now Dallas-based Aerus Holdings) furthered the technology by developing an air purification product that kills pathogens both in the atmosphere and on surfaces. 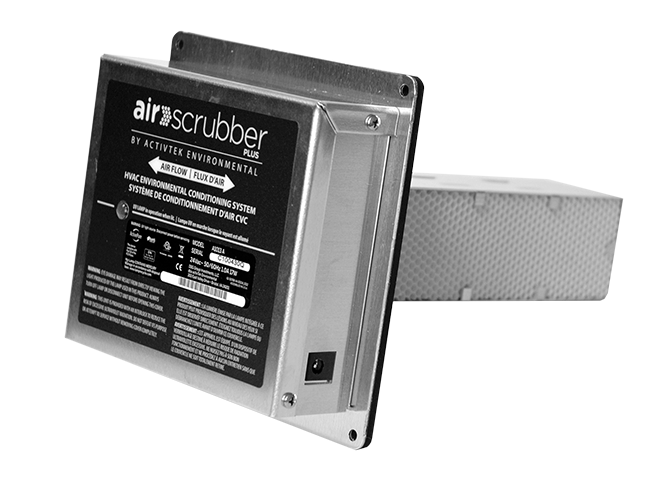 Aerus Holdings’ Air Scrubber Plus incorporates NASA ethylene-scrubbing technology. The device is installed into home ventilation systems, which disseminate the product’s “friendly cleaners” that kill pathogens in the air and on surfaces.

A conceptual rendering of what a Martian garden could look like. Plants naturally produce ethylene gas, which hastens decay, especially if left to build up in enclosed spaces such as this. The Wisconsin Center for Space Automation and Robotics used NASA funding to develop a titanium dioxide-based scrubber that converts the gas into water and carbon dioxide, both of which are beneficial to plants.