With demanding schedules, a sunrise or sunset every 45 minutes, and extremely noisy surroundings, it’s understandable why many astronauts onboard the International Space Station suffer from insomnia in the early stages of a mission. To help combat what can be a dangerous condition, over the years NASA has funded research not only to investigate the underlying physiological phenomena that contribute to sleep deprivation but also to find methods for treating it.

With those objectives in mind, in 2001 the agency's medical research arm, the National Space Biomedical Research Institute, provided funding for State University of New York at Stony Brook neuroscience professors to examine the impacts of the body’s vestibular system on sleep, the ultimate goal being to help astronauts adjust their sleep schedules more effectively.

The vestibular system, says Seth Horowitz, one of the neuroscientists involved in the study, is known primarily for contributing to our sense of balance. Three connected, semicircular canals and two small otolith organs located in each of our inner ears work in constant unison with other physiology to act as rotational and linear accelerometers, sensing movements and communicating them through neural signals that travel to the brainstem’s vestibular nuclei. From there, the nuclei trigger neural structures throughout our brains and bodies that enable us to walk and run and do everything else without falling.

But research in the 1960s and ’70s on a common medical condition called Sopite syndrome hinted at the vestibular system’s involvement in sleep regulation as well. Sopite syndrome is, in short, a form of motion sickness, but “it doesn’t make you want to lose your lunch and your tequila,” explains Horowitz. “What it does is make you sleepy.” The reason? Scientists hypothesized that the afflicted are especially susceptible to a running vehicle’s constant low-amplitude vibration, which, similar to rocking a baby to sleep, triggers something in the vestibular system that reduces arousal, or general wakefulness.

At Stony Brook, Horowitz and his colleagues tested that theory by performing experiments on hamsters, animals with very stable sleep habits and comparable vestibular systems. To induce a similar vibration to riding comfortably in the backseat of a sedan, they simply spent time handling the hamsters in various ways—lightly shaking them, rolling them, and spinning them in place. The results were clear: low-amplitude vestibular stimulation shifted hamster—and therefore human—sleep cycles.

“On one end, high-amplitude, sudden vibration wakes you up,” says Horowitz, “but these low-amplitude, periodic vibrations put you to sleep. You’ve got a psychophysical curve that covers all states of arousal and sleep.”

Further research would reveal that, in fact, the vestibular system is tied into nearly every aspect of the sleep network, including the suprachiasmatic nucleus, the master clock in charge of regulating our circadian rhythms, and a region in the hypothalamus that’s host to a stimulation-inducing neuropeptide called orexin. As the hamster experiment demonstrated, vestibular modulation can affect these arousal centers, causing either an excited or sleepy state.

After the NASA funding ended in 2005, at which point Horowitz left the university, he got to thinking: How he could utilize what he learned to help people, himself included, get a better night’s rest? He would come up with a breakthrough idea by recognizing that sleep-inducing vestibular vibration could also be brought about through sound.

To understand how sound induces various states of arousal or wakefulness, Horowitz says, imagine you’re in a nightclub, and you hear this steady 4/4 rhythm carried by a deep bass. “It’s a dance-or-die kind of rhythm,” he says. “It turns out that very low frequencies at very high amplitudes can trigger certain cells in the vestibular system that make you tap your feet or move your body back and forth to the rhythm.”

This “crosstalk” phenomenon, as Horowitz calls it, between the auditory and vestibular system formed the basis for an audio program that incorporates the science from Horowitz’s NASA-funded research along with other tools to help people get a better night’s rest. Using sound makes sense, he says, because “your auditory system is the only sensory system that’s still working full-bore while you’re asleep.”

In creating the program, Horowitz first developed algorithms that produced a low-frequency, semi-periodic, moderate-amplitude rumbling sound; in other words, a sound simulating the vestibular stimulation in a vehicle that causes a person with Sopite syndrome to fall asleep, only slightly louder. He describes the resulting sound as akin to “a recording of a microphone being held in the back of a car.”

Next, Horowitz mixed in what are known as binaural beats: stereo-beating pulses of sound that synchronize the cortex of the brain. He arranged the beats to match the brain’s rhythm changes during different stages of sleep, helping to keep a person in slumber throughout the night. Third, he added auditory-facilitated relaxation, which means using calming sounds to lower heart and breathing rates to levels that promote sleep. Horowitz worked with composer Lance Massey—creator of the T-Mobile ring tone—to weave the three technologies into a number of classical music tracks.

Their invention would be put to the test when a friend of Massey’s challenged them to help his two energetic young boys fall asleep at night. Putting them to bed every night was a struggle many parents can relate to. The inventors handed him a CD containing the classical music tracks. The first night, he played the boys a variation of Pachelbel’s Canon, but because they were fans of a thrash metal version of that particular piece, says Horowitz, they became energized by it, which had the opposite effect. The second night, their father instead played an unfamiliar track, which triggered a different response.

“He said that it worked like a charm,” Horowitz recalls. “He said it just knocked them out.”

The result encouraged Horowitz and Massey to test the technology on a larger group, so they set up an experiment with a therapist in Los Angeles who worked with people suffering from severe sleep problems. She handed two-thirds of her patients CDs containing music that carried the algorithms and other sleep-inducing stimuli, and the rest—the control group—were given CDs without them. The results were telling: 77–80 percent of those who used the audio program were sleeping better at night, while the control group was not reporting a better night’s rest with any significance.

The successful study spurred the pair to commercialize the technology, resulting in the formation of Park City, Utah-based Sleep Genius, which in 2013 began selling the audio program of the same name as a downloadable smartphone app for the iOS and Android platforms.

Using the Sleep Genius app, Horowitz says, requires only a stereo system or sleep-safe headphones. Next is simply choosing one of three music selections—Renewed Universe, Dreamscapes, or Tranquility—setting the alarm (or the timer, if you only need help falling asleep), and then turning out the lights.

The program is configured in ways that can benefit people of all ages. Horowitz says older adults generally are able to fall asleep but wake up a lot during the night; young adults tend to have the exact opposite problem. Adults older than 40 years of age start to lose their ability to hear high frequencies; babies tend to respond positively to high-pitched white noise. “We’ve found a balance of frequencies that seems to address most of those factors for a wide group of people,” he says.

Horowitz notes that chronic sleep sufferers usually need to use the app for several consecutive nights before the benefits start to kick in, and he gives extra encouragement to those who use sleep medications. “We’re not anti-pharmaceutical,” he says. “If you’ve got meds and you need them, take them. But if a non-medical alternative such as this works, pursue it, because drugs can present all sorts of unwanted side effects.”

In the short time the app has been on the market, more than 400,000 customers who suffer from chronic sleep ailments have downloaded it. In addition to evaluating customer questionnaires, Horowitz plans to conduct further research on the technology’s efficacy by having test subjects wear watches that monitor for movement throughout the night. Because muscles become paralyzed during deep sleep, less movement is indicative of a better night’s rest.

“The whole venture started with NASA research using hamsters and studying a common problem,” Horowitz says. “The end result is, this app is doing people a lot of good.” 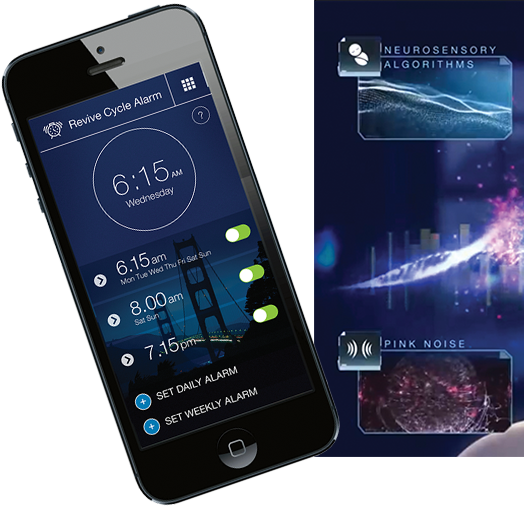 Neuroscientist Seth Horowitz used the results of his research on vestibular stimulation to develop Sleep Genius, a mobile app that can help people who have trouble sleeping get a better night’s rest. The app also helps those who take power naps during the day. 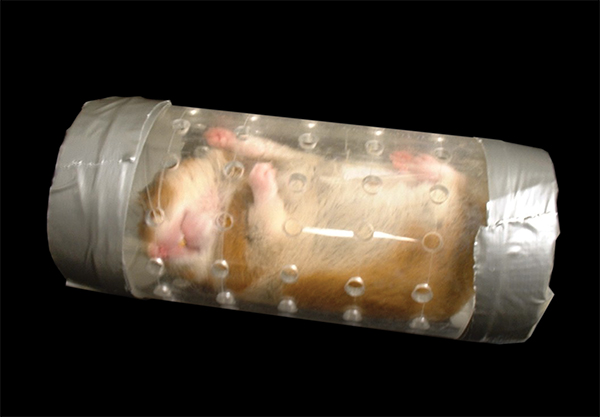 In the early-to-mid 2000s, scientists at the State University of New York at Stony Brook used hamsters to investigate how vestibular stimulation affects various states of arousal. Results showed that, depending on the modulation, such stimulation can cause either an excited or sleepy state.

Astronauts Mike Massimino (left) and Michael Good, STS-125 mission specialists, are pictured in their sleeping bags, which are attached to lockers on the middeck of the Earth-orbiting Space Shuttle Atlantis at the end of flight day eight on May 18, 2009. Astronauts’ busy schedules combined with a host of biological factors make getting adequate rest in space a challenge. As a result, NASA has funded research to investigate and treat sleep deprivation. 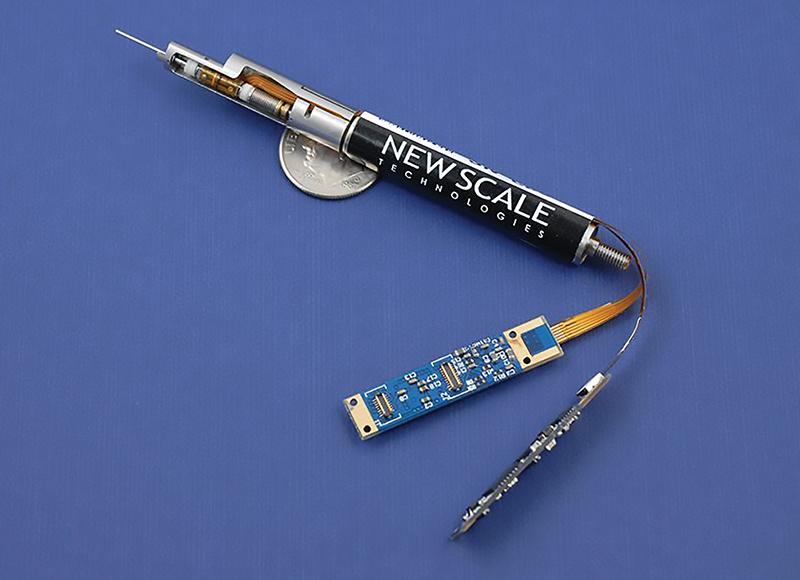 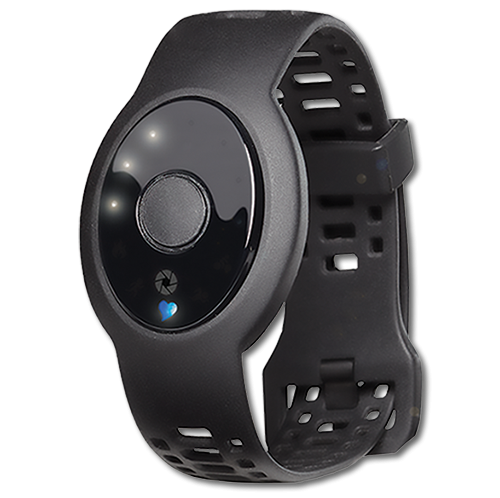