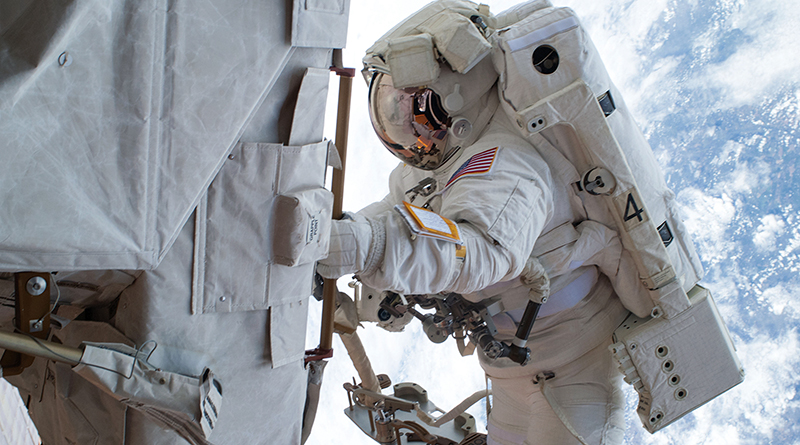 The human body in space is as vulnerable as a fish out of water. Beyond a spacecraft’s protective environment, there is no oxygen to breathe and nothing to shield you from the sun’s searing heat and radiation. And just as disturbing, the lack of air pressure means your body suffers from rapid decompression symptoms and eventual death.

Enter all that stands between an astronaut and such a bleak prognosis: the spacesuit. Also called an Extravehicular Mobility Unit, or EMU, the spacesuit is a convergence of technologies designed to provide a breathable and otherwise livable temporary microclimate. Because of the sometimes hours-long projects undertaken outside the spacecraft, there’s even a “drink bag” for when thirst calls, and an extra-absorbent undergarment for when nature does.

Another critical requirement for a spacesuit is controlling the heat and humidity generated by the human inside the airtight outfit. In the mid-1960s, NASA adopted for the Apollo lunar suits a concept originally developed by the British Royal Air Force to provide cooling for aircraft pilots in hot environments. It utilized a battery-operated miniature pump that cycled chilled water through a series of tubes lining the garment, which pressed against the skin, absorbing heat. An iteration of this liquid cooling technology is still used by astronauts today.

Starting in the late 1960s, a team of scientists and engineers at NASA Ames Research Center investigated the physiological effects of a wide variety of artificial cooling concepts. Many of these were subsequently commercially developed and applied to solve various industrial, military, and medical problems on Earth. One such application now helps athletes and active people recuperate from injuries.

When someone sprains his or her knee or ankle, the RICE (rest, ice, compression, and elevation) method is standard protocol for treating such an injury. Icing plays a critical role in reducing pain and swelling, but applying ice for too long or with too cold a compress can cause more tissue damage.

In 1997 William Elkins, an engineer who had worked with the NASA Ames team, and Peter Wasowski, a veteran in the medical device industry, co-founded CoolSystems (now Game Ready) to bring to market a device—consisting of ergonomic wraps connected to a control unit—that delivers optimal amounts of pressure and cold to speed up recovery (Spinoff 2004). Professional athletes, therapy centers, and athletic trainers around the world now use the technology.

While Elkins used the NASA-derived liquid cooling garment to help heal injuries, Wasowski utilized the concept of cooling the body and combined it with another innovation that helps people perform anaerobic exercise.

The benefits of anaerobic exercise are many, as it builds muscles and strength, burns fat, increases anabolic hormones (human growth hormone, testosterone), continues the burning of calories after exercise through excess post-oxygen consumption, and enhances endurance by increasing lactate threshold and maximal oxygen consumption, or VO2 max. According to Wasowski, these benefits are superior to those offered by aerobic exercise.

The problem, however, is that many people cannot reap the benefits afforded by anaerobic activity because the exercise traditionally requires heavy weightlifting or high-intensity interval training, such as hard sprinting. “This is especially true for the elderly, injured clients going through physical therapy, and the inactive people who either can’t or won’t exercise,” he adds.

Wasowski has developed a system he says helps people overcome those barriers, and it started in the late 1990s when he discovered a technique called vascular compression. The basic idea is that adding compression to arm and leg muscles during exercise accelerates the activation of the body’s fast-twitch muscles and hastens the buildup of lactic acid, thereby placing the muscles in an anaerobic exercise state.

Utilizing that theory, Wasowski developed his own compression cuffs that also incorporate the NASA-derived liquid cooling technology, which, in addition to increasing one’s exercise efficiency, also helps to reduce sweat and post-workout aches and tiredness. After integrating the device into a specialized workout routine, in 2009 Wasowski founded San Jose, California-based Vasper Systems California LLC to deliver the technology,

A Vasper session takes only 30 minutes to compete, which reflects, Wasowski says, the efficiency of the technologies built into it. Once the liquid-cooled compression cuffs are on the arms and thighs, along with a cooling vest strapped to the chest, the workout commences on a recumbent elliptical specially set according to ability. The program follows principles of interval training: a warm-up period followed by short sprints interspersed with short recovery periods. In total, the session demands only 20 minutes of actual exercise. Following the regimen are 10 minutes of decompression, accomplished by lying face-up on a cooling mat.

Despite its brevity, Wasowski says, thanks to the cooling cuffs, the program can produce results similar to other exercises that take longer than an hour to complete. The low-impact nature of the Vasper exercise protocol also leads to decreased wear and tear on the body compared to more physically strenuous routines. That also means the typical delayed muscled soreness that frequently comes after exercise is avoided. This makes the Vasper program highly accessible to those recovering from injury or vulnerable due to age or disease.

Vasper currently has locations in San Jose and Honolulu, and Wasowski says the reception has been very positive from people of all backgrounds and abilities, from Olympic athletes and Ironman triathlon competitors to exercise physiologists and senior citizens. The cool compression technology’s effects on other health outcomes are also being explored, for instance, on those who suffer from Parkinson’s disease and multiple sclerosis, and for patients undergoing cardiac rehabilitation. Other research is being done to see if people suffering from post-traumatic stress disorder, traumatic brain injuries, and concussions would benefit from Vasper, the idea being that the benefits of anaerobic exercise may restore balances in the brain’s chemistry.

And it all began with regulating an astronaut’s body temperature in space. “The idea of cooling the human body has made quite a journey,” Wasowski says. “It’s wonderful how it’s found a critical use back on Earth in helping people lead healthier lives while helping others compete at the highest levels in sports.” 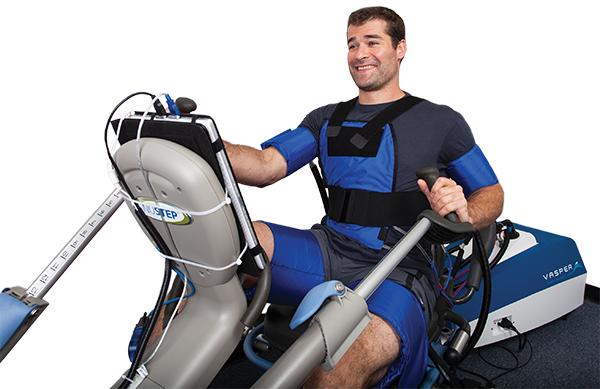 NASA astronaut Mike Hopkins works to change out a faulty water pump outside the International Space Station in December 2013. To dissipate body heat that accumulates in his spacesuit, an undergarment circulates chilled water through tubes pressed against his entire body.