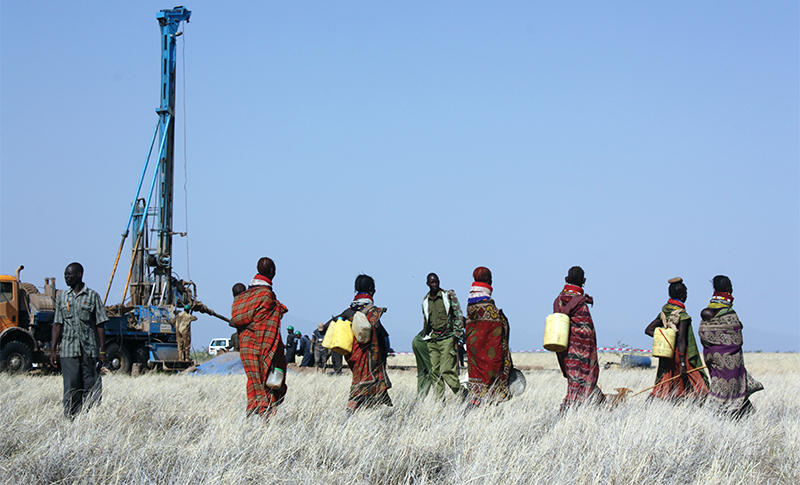 Turkana County in northwest Kenya has been reeling from several years of crippling drought. As a consequence, the nomadic peoples in the region have suffered. Livestock such as goats and cattle, the sole source of income for these pastoralists, have perished by the droves from starvation, and the resulting economic hardship has left many children malnourished. Many have also died from violent clashes over increasingly scarce resources.

But a new story was written over this hardened landscape in September 2013, following the announcement of an incredible find: at least 66 trillion gallons of water deep beneath the surface of Turkana in the Lotikipi and Lodwar basins. Combined with the 898 billion gallons of rainfall diverted into the basin annually, the previously untapped catchment system has the potential to improve Kenyans’ lives for generations.

The discovery was made possible by international exploration company Radar Technologies International (RTI), which employs a battery of technologies, including troves of NASA data, to probe Earth in search of one of nature’s most valuable resources.

The story of RTI began some 20 years ago when its CEO, Alain Gachet, had been working as an exploration geologist and geophysicist discovering major oil fields for companies. In 1996 he decided to start his own business, which focused on not only oil but also mineral exploration. His first undertaking in that arena took him to the rainforests of central Congo, where a mining company’s employees had discovered gold nuggets shimmering in rivers. The firm wanted to locate their source.

It was a challenging request because the region was poorly mapped due to dense rainforest cover. To work around the issue, for weeks Gachet followed the pygmies, who were randomly panning gold flakes in the rivers, and used a GPS unit to plot the points where the precious metals were being found. He then flew from Brazzaville to Washington, D.C. where he could access images taken with a new remote sensing technology called the Spaceborne Imaging Radar (SIR), which was flown onboard the Space Shuttle Endeavour in 1994. By superimposing the GPS points over the imagery, he was able to locate the mother lode deposit within the general outline of the land’s topography. What he was able to accomplish was a real shock, he said, and the experience opened new avenues for exploration in hostile and remote environments.

NASA’s SIR is an example of a synthetic-aperture radar (SAR), a powerful tool that uses radio waves to map Earth’s topography. In addition to having high-resolution capabilities, it’s superior to optical instruments because it can function seamlessly in total darkness, isn’t hampered by cloud cover and dense forests, and can even penetrate under the canopy to reveal geological features beneath the surface of the ground.

NASA pursued the SIR mission because the agency understood that topographical maps would prove invaluable tools for studying any of a number of environmental issues, from deforestation in the Amazon to soil moisture retention in the American Midwest. While Gachet and RTI initially used the data from the mission to locate gold, diamonds, and other prized commodities, it also eventually led him to what he considers his most important finds.

In 2002 Gachet was working as an oil exploration consultant for Shell. While combing through the Libyan desert using SAR-gathered imagery, he noticed something peculiar: evidence of heavy moisture underground. The moisture turned out to be leaks from the Great Man-Made River—a massive subsurface pipeline that carries water from a Saharan aquifer to the country’s coastal towns. After reporting the faulty pipe to the Libyan government, he realized again that he was onto something new and important.

“The experience gave me the idea that I could use radar frequencies to find underground water that could be used to help people,” he says, “because people don’t drink oil—they drink water.”

Gachet spent the next few years developing the WATEX System, RTI’s water exploration and discovery technology. WATEX combines several inputs to achieve its unique capabilities. At the core of the technology is a proprietary process Gachet developed that removes surface obstacles from NASA SAR data and SIR data without harming the soil wetness signal. In other words, the WATEX processes NASA SAR imagery so that information about groundwater can be inferred without the interference of surface features such as infrastructure, rocks, or vegetation. This process is combined with several other inputs, such as geophysical and geological data.

Then there’s NASA Landsat satellite data, which is added as a critical input to the WATEX System. Started in 1972, the Landsat program, administered by both NASA and the US Geological Survey, is the longest continuous satellite-based record of the Earth’s surface through not only visual imagery but also the near-infrared, short-wave, and thermal infrared bands of the electromagnetic spectrum. By analyzing the time-lapsed imagery, scientists are able to monitor numerous environmental conditions, from deforestation to agricultural land use and rates of erosion. For WATEX, Gachet utilized Landsat data to note the chemical signatures of rocks and also discern surface landscapes, which give clues to where water might accumulate by looking at slopes, flood plains and ditches.

All that data is used in conjunction with various other disciplines—physics, chemistry, geophysics, seismology, and a complex algorithm developed by Gachet—to render a 3D map of water occurrence probability in a given area that shows where groundwater is likely to be located and how deep. RTI’s WATEX maps are used by companies to plan drilling and avoid costly mistakes. But determining the exact location where water flows underground wouldn’t be possible without another NASA technology: the Shuttle Radar Topography Mission, or SRTM. In February 2000 the Space Shuttle Endeavour flew in low-Earth orbit for 11 days, gathering the first high-resolution, near-global data set of land elevations. Gachet says the data is accurate up to 12 meters, which is enough to obviate the need of going into the field to calibrate the maps and plot coordinates manually.

Thanks in part to SRTM, in order to find the water in the field, drillers now need only use RTI’s WATEX maps and a special GPS-based device called Groundwater Exploration Navigation System, which guides them to their drilling locations. “There’s life before SRTM, and life after it,” says Gachet. “Before we started using it, we had to travel into some very dangerous territories marked by civil war and terrorism. I was threatened several times while in the field and had to escape very quickly because an attack was going to be launched at me. That’s why this technology is so important—it saves time and lives.”

It was 2004, and the Darfur crisis—a major armed conflict in western Sudan—had displaced 250,000 people in Chad, forcing them into refugee camps. The United Nations High Commissioner for Refugees contacted Gachet requesting that he use WATEX, which had just been developed to its full capacity, to uncover areas of Eastern Chad that contained enough subsurface water to sustain the evacuees. In four months he managed to find enough of it to sustain all of the refugees. The feat caught the attention of the United States Agency for International Development, which funded RTI to continue working in Sudan, on the other side of the Chad border, where 2 million others had been displaced. As a result, Gachet and his team spent another six months mapping 200,000 square kilometers of land in Darfur. Enough water was discovered to support 3 million people and prevent further spending of millions of US dollars to truck water to the camps.

Since his work in Sudan, Gachet has utilized his high-tech divining rod to find much-needed water all over the world. He’s helped refugees in war-torn countries such as Afghanistan, aided in post-war reconstruction efforts in Angola, and assisted the Kurdish government during a major drought. He’s even working to find reservoirs in Texas, where RTI has an office, in New Braunfels near San Antonio.

While the discovery in Kenya—made possible through UN funding—is the most recent in a string of successes over the last several years, every find gives him the satisfaction of knowing he’s done something of value for the world. He is especially proud of his work in Turkana County, the most desolate area of northern Kenya.

“There’s not a single village on the land for 5,000 square kilometers,” he says of the place. “No trees, no villages, nothing. And people are struggling for life, having to walk 80 kilometers to get to the nearest water hole for their cattle. Sometimes they are forced to intrude into Uganda or South Sudan where they are killed by other tribes. They kill each other because there is no water and lots of weapons.”

But the estimated 66 trillion gallons of potable water detected by RTI, which the government says can sustain the country for 70 years, could bring long-lasting stability, economic and otherwise, to the region. Gachet revels in how profound that is. “As I like to say, discovering a little water brings war, but discovering a lot of water can bring peace, because everyone can share it.”

And a lot of credit, he says, should also go to the space agency, whose technologies helped make all this possible. “NASA’s Landsat and SRTM are my eyes on the ground. Without them I am totally blind. They are great gifts to humanity.”

Abstract
Using NASA Landsat satellite and other remote sensing topographical data, Radar Technologies International developed an algorithm-based software program that can locate underground water sources. Working with international organizations and governments, the firm, which maintains an office in New Braunfels, Texas, is helping to provide water for refugees and other people in drought-stricken regions such as Kenya, Sudan, and Afghanistan. 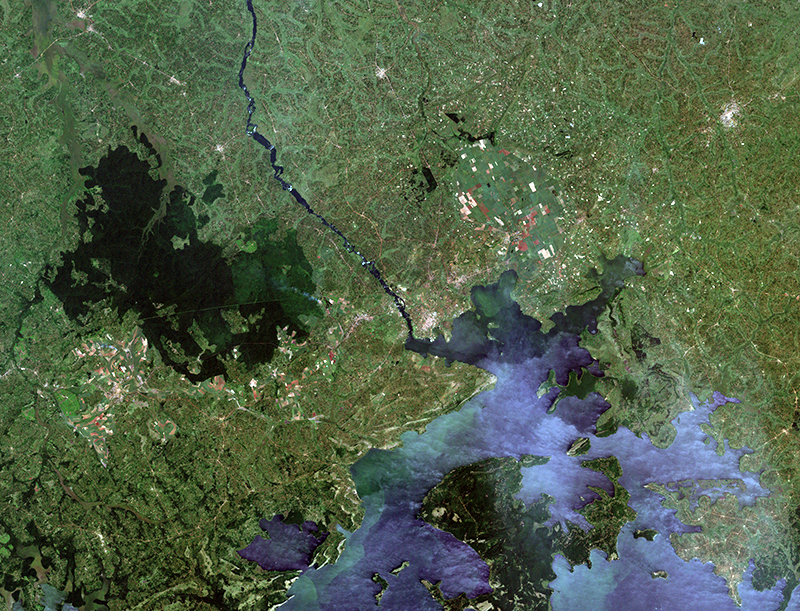 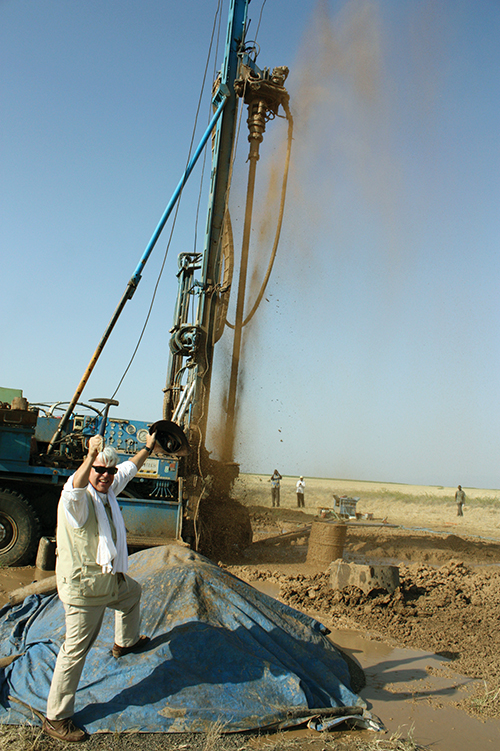 RTI founder Alain Gachet celebrates the discovery of water in the Lotikipi basin, an area that has suffered from severe drought in recent years. 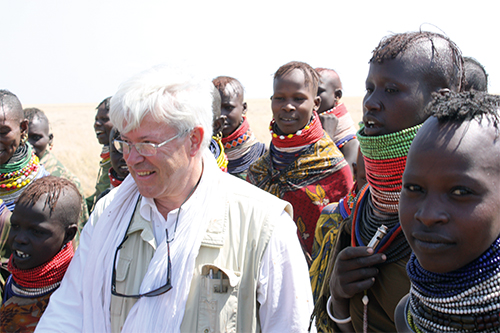 Gachet with the Turkana women as they rejoice in the water's discovery. The Kenyan government says the 66 trillion gallons estimated to be in the Lotikipi and Lodwar basins can sustain the country for 70 years.

The Turkana women come with containers to gather newly discovered water from a drilled well in the Lotikipi basin.