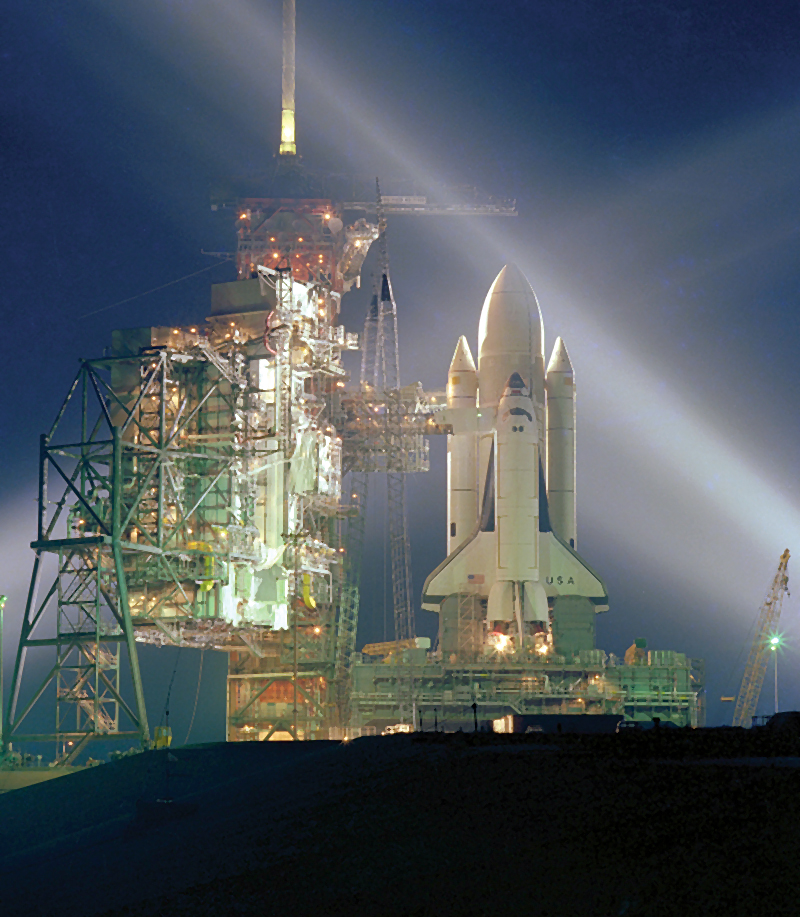 Shock Absorbers Save Structures and Lives during Earthquakes

In the early 1960s NASA tackled one of its greatest challenges: sending a man to the moon. The physical embodiment of that effort, the Apollo spacecraft, stood as a testament to human ingenuity. At 363 feet tall, the structure would dwarf the Statue of Liberty by nearly 60 feet; fully fueled, it weighed more than 6.2 million pounds.

Delivering all that liquid hydrogen fuel to the spacecraft, along with electrical signals and gases, were the umbilicals: bundles of cords and tubes that extended from ground sources up to the service tower, or gantry, where they were tied onto large swing arms that connected them to different parts of the rocket. The umbilicals remained fastened to the spacecraft up until just a few moments before launch; in the case of an emergency on-pad abort, they would de-tank fluid from the rocket to prevent an explosion.

To get the swing arms out of the way quickly during a launch, the umbilicals were attached to the rocket with pyro bolts—fasteners that immediately break apart after receiving an electrical charge. Once liftoff was underway, the pyro bolts would sever, detaching the swing arms from the rocket. A built-in spring would then pull the arm back into its cradle near the gantry. But the challenge, given the scenario, was controlling that sudden, powerful thrust so the swing arm didn’t break from overexertion or collide with the vehicle.

That’s where shock isolation systems come into play. Also known as dampers, these devices control spring and suspension movement, which in this case meant guiding the swing arms gently into their cradles during launch.

Dampers are basically oil pumps. Inside, hydraulic fluids flow through orifices designed to slow the liquid’s movement according to how much resistance is needed at any given point in an object’s stroke, or its movement from one point to another. All that kinetic energy is diverted into the fluid by way of heat, which eventually dissipates into the air.

Helping to develop these dampers for NASA was North Tonawanda, New York-based Taylor Devices Inc. It was founded in 1955 by Paul Taylor, a former lead engineer with Curtiss-Wright Corporation, which manufactured the famous P-40 Warhawk fighter planes (known for their painted shark’s mouth logos) during World War II. The company had previously developed dampers for the Navy’s fighter jet aircraft programs. and it’s collaboration with NASA in the early 1960s marked be the beginning of a long engagement with the space industry.

In working with NASA on the swing-arm dampers, Taylor Devices experimented with a gas-driven type of shock isolation system. Paul’s son, Doug, who is now CEO of the company, explains its complexity. “You had a scuba tank attached to the side of a hydraulic cylinder, with all kinds of external plumbing, hoses, and valves,” he says. “There were a gazillion parts involved. It was a mechanic’s and plumber’s nightmare.”

The technology worked, but to guarantee maximum reliability NASA asked the company to apply conventional shock absorption technology, and even that request was a challenge. Shock absorbers can be highly intricate machines that require numerous sets of orifices to control for different stages of a stroke. For example, a swing arm moved by a spring needs more resistance at the initial stage, when there’s more kinetic energy to absorb, than at the end of the stroke as the arm approaches its cradle.

Extreme differences in resistance mean the damper must vary mechanically from one end to the other. “The shock absorber designs we created were pretty much stretched to their limits because of the impact speeds we were dealing with,” says Taylor.

The experience with Apollo inspired Taylor Devices to work on another kind of shock absorber that the space agency was investigating—not for rockets, but for computers.

In the 1960s, Taylor explains, scientists enabled computers to run on transistors rather than vacuum tubes, but the initial transistor prototypes were found to be too expensive, complex, and cumbersome. NASA funded Honeywell to investigate utilizing oil-based hydraulics to run a high-speed analog computer instead, and Taylor Devices was hired as a sub-contractor to work on some of the engineering elements.

The company’s research in the science of fluidics enabled it not only to aid in building a hydraulics-based computer, but also to develop its successful line of innovative dampers.

The science behind fluidics is based on the principle that, in a converging-diverging duct, a compressible liquid’s density and pressure change depending on its flow speed through the subsonic, transonic, and supersonic velocity ranges. Taylor Devices developed a damper using a compressible fluid capable of operating at transonic and supersonic fluid velocities. Intricate and precisely machined passageways provided the ability to have fluid flow properties change as the fluid accelerated past sonic velocity.

The end result was a fluidic damper that can easily exceed the performance of conventional variable orifice designs over a much wider range of system impact velocities. The fluidic damper also operates at higher pressures than conventional designs, which allows for a more compact but exceedingly powerful damper package as compared to previous technology.

“Ultimately, the fluidic dampers’ internal pistons are just pieces of steel or bronze machined with very specific and complex passageways to affect the flow of liquid the way you want,” he says. “It’s a simple device that lasts a really long time with no maintenance.”

By the time the agency officially instituted the Space Shuttle Program in 1972, the fluidics-based dampers were ready for the offering. “We said to NASA, ‘Here, this is an improvement on Apollo. What do you think?’” Taylor recalls. “They loved it.”

The technology would be used to control the gantry’s swing arms and the umbilical withdrawal arms inside the launch platform’s tail service masts during shuttle launches until the program’s end in 2011, and it is still used by the agency to protect sensitive electronic equipment during launches to the International Space Station.

But the technology hasn’t been limited to protecting swing arms or computers. Taylor Devices’ fluidic shock absorbers are now being used as seismic dampers to stabilize buildings in the event of an earthquake.

Of all the natural disasters on Earth, earthquakes are capable of unleashing the most energy. For example, an 8.0-magnitude earthquake releases the equivalent of over 6 million tons of TNT, enough to destroy everything at its epicenter. To protect buildings and bridges from collapsing from such powerful tremors, in the 1990s Taylor Devices began selling and installing fluidics-based seismic dampers. By absorbing destructive energy, the same technology that kept the Apollo and space shuttle swing arms safe keeps structures—and the people in and around them—safe during an earthquake.

The rule of thumb, says Taylor, is the larger the diameter of the damper, the more energy it can absorb. The company’s smallest damper is five inches in diameter and three feet in length and absorbs up to 25 tons of force. The largest damper the firm has manufactured is more than three feet in diameter and 22 feet in length, with a force rating of 1,100 tons. Because dampers can be made to virtually any size and level of resistance, they can be customized to meet every building’s specific needs.

“I’ve got one 55-story building in Mexico City that has only 12 dampers on each side of the building’s frame, because they’re giant dampers that span six floors each,” he says. The relatively small number of dampers makes possible the skyscraper’s giant glass windows and large open spaces in the interior. “But then you go to another building, and you might have 300 or 400 smaller dampers put into individual bays.”

Older buildings that are more structurally vulnerable may also require rubber bearings placed under their foundations, as was the case with Los Angeles City Hall, an 80-year-old concrete and steel edifice that had sustained a number of cracks caused by prior earthquakes in the tremor-prone region. “The entire building was jacked out of the ground and all the columns were cut,” Taylor recalls, “then the building was lowered back down onto rubber bearings so it could move plus or minus two feet horizontally in either direction. Then we put 54 large dampers alongside the rubber bearings. The dampers absorb the energy, and the rubber bearings allow the whole building to float.”

Taylor estimates that, to date, more than 550 buildings and bridges are now protected by the company’s fluidic seismic dampers, many of them located in the world’s most seismically active areas such as San Francisco, Tokyo, and Taiwan, among others. “Not a single building outfitted with our dampers has fallen or had even minor damage after a quake,” he says, “and because of that a substantial number of human lives have been saved.”

Today those seismic dampers account for roughly 60 percent of company sales. Much of that success, Taylor notes, is tied to the firm’s longstanding relationship with the space agency. “We’re a small business,” he says. “We didn’t have the money to finance a total revamp of our technology, but with some NASA funding we were able to bring fluidics-based dampers into the market. That was a big advantage for us.”

Abstract
With NASA funding, North Tonawanda, New York-based Taylor Devices Inc. developed fluidic shock absorbers to safely remove the fuel and electrical connectors from the space shuttles during launch. The company is now employing the technology as seismic dampers to protect structures from earthquakes. To date, 550 buildings and bridges have the dampers, and not a single one has suffered damage in the wake of an earthquake. 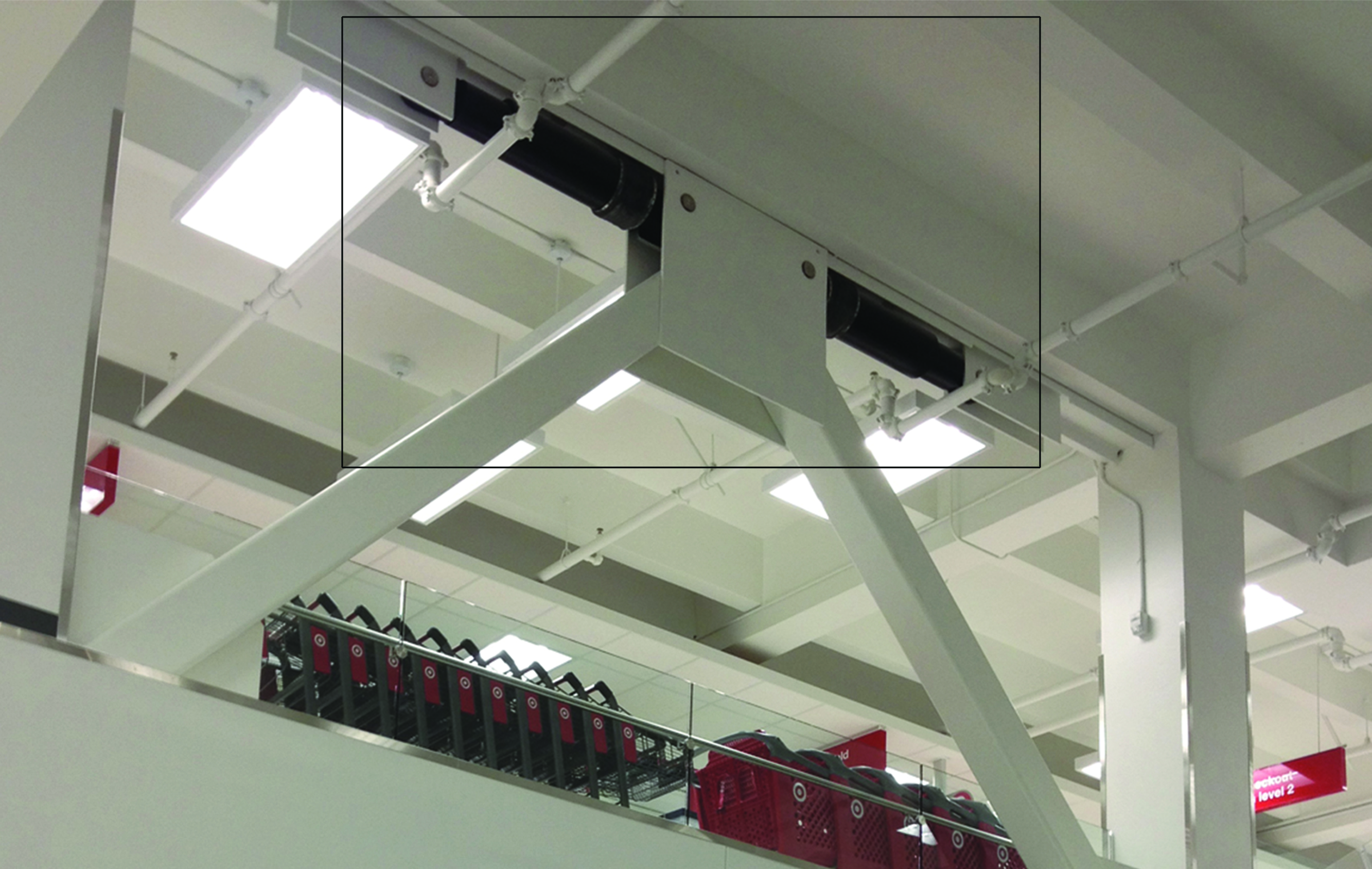 One of Taylor Devices’ chevron brace dampers is embedded in a building’s frame at the Portland, Oregon Galleria shopping mall. The company is using its NASA-derived dampers to secure structures during earthquakes. 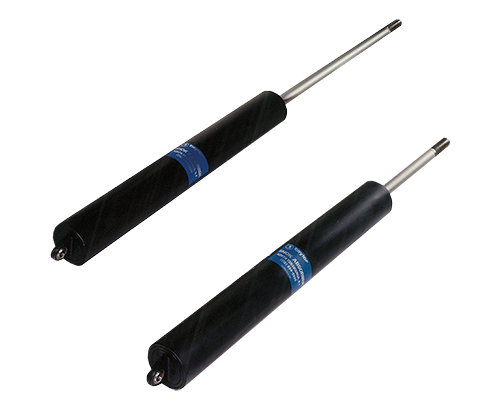 Taylor Devices developed fluidics-based shock absorbers (above left), derived from NASA funding for advancing computers, to safely remove the shuttle’s umbilicals during launch. Depending on their positions, the shock absorbers ranged from two to eight feet long and five to eight inches in diameter. 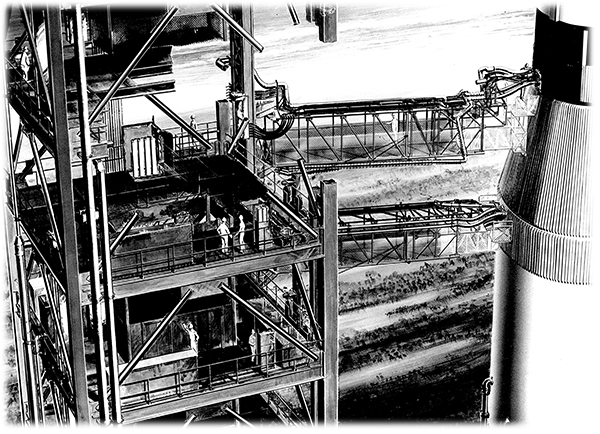 An illustration of the fuel- and electricity-carrying umbilicals that extended from the gantry to the Apollo spacecraft. In the 1960s Taylor Devices developed shock absorbers to help safely dislodge the umbilicals from the spacecraft during launches.

Space Shuttle Columbia just before its inaugural launch on April 12, 1981.