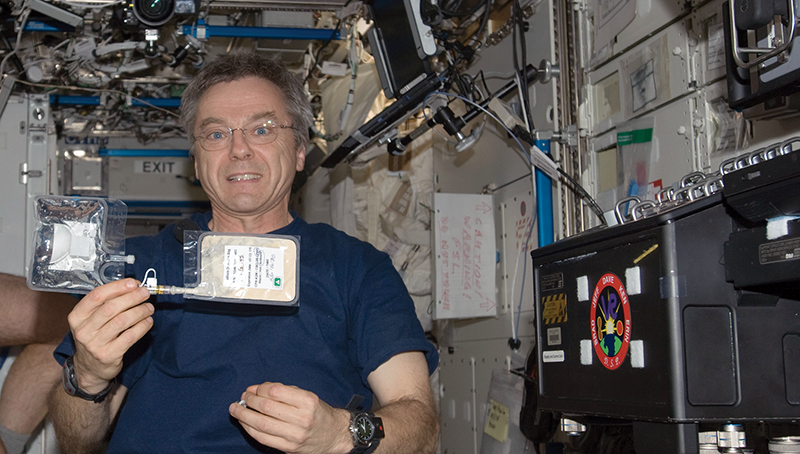 Onboard the International Space Station, or ISS, very little goes to waste. One of the more glaring examples is the spacecraft’s water supply, which is reclaimed by recycling astronaut urine, sweat, and even exhaled humidity. Thanks to the technology, former ISS crewmember Don Pettit once said, “Yesterday’s coffee becomes today’s coffee.”

But water is precious only when it’s safe for drinking, which means being free of contamination. One test that’s required by the Environmental Protection Agency and performed by municipalities across the country checks for the presence of coliform bacteria such as E. coli. The existence of such bacteria is an indication of fecal contamination, which can lead to a host of diseases.

Throughout the late 1990s and early 2000s, astronauts on the ISS only had access to technology that could count the number of bacteria in a sample; there was no way of knowing what kinds of bacteria were present without having samples flown back to Earth. But the Space Shuttle Columbia disaster in 2003 temporarily discontinued US flights to and from the station, which hampered the agency’s ability to transport water samples along with supplies. As a result, NASA scientists worked to simplify the coliform bacteria test so that it could be performed in a restricted space environment without compromising its accuracy.

The standard procedure for the coliform bacteria test kit is designed for a laboratory. It requires pouring the water sample into a container filled with a growth indicator powder, screwing the lid on, and then placing it into an incubator that’s set to the temperature of the human gut, where coliform bacteria thrive. Within 24 hours, if the bacteria is present, its enzymes will cleave the powder’s reagent molecules into pieces, which in turn changes the water color from yellow to purple.

Given the limited number of flights available to the ISS via Russian spacecraft, it wasn’t feasible to transport all that equipment. “We needed to supply the space station with just a fraction of the uplift capability that we had before,” says John Feighery, who at the time was an environmental engineer at Johnson Space Center charged with overseeing air- and water-monitoring hardware. That meant incubators, and even containers, were too bulky to bring up into space. So a critical question had to be answered: Could an accurate coliform bacteria test be performed without containers and without an incubator to warm the sample to an ideal temperature?

The answer was yes. When Feighery realized that the Johnson Microbiology Lab had designed an alternative procedure that functioned nearly as well as the standard one, he worked across organizational lines to get the system certified for flight. “We did a lot of testing to show you could do these tests at lower temperatures and without containers and still make them work,” says Feighery. To put it simply, a water sample, mixed with the growth indicator powder, is stored in a plastic bag and left out at room temperature for approximately 44 hours, at which time a dependable reading can be made.

While the new procedure was a boon for astronauts onboard the ISS, Feighery, who cofounded the Johnson chapter of Engineers Without Borders, an organization that helps with international development work, would come to recognize its potential use on Earth.

In 2007 Feighery enrolled in a PhD program in Earth and Environmental Engineering at Columbia University, and a major project involved traveling to Bangladesh to test tube wells—shallow, hand-dug wells common in the country—for fecal contamination. What made the work a challenge, he says, was having to haul a bulky set of equipment that required a high level of skill to operate. “We want communities to perform tests on their own,” he says, “but there’s no way. The equipment’s too expensive and it’s too hard to understand how to use it unless you’re an expert.”

That’s when he recalled the space agency’s simplified coliform bacteria test, performed with a simple bag kept at room temperature for 44 hours. “I realized that NASA’s way of thinking in terms of making things simple, low-cost, and reliable could be really powerfully applied back on Earth,” he says. But it was a two-pronged problem. Apart from needing access to the technology, people needed an easy way to access those test results. “A lot of the time, data from projects that are done in countries just die in reports and spreadsheets that nobody ever translates or sends around to anybody else,” he says. “There had to be a way to share data that anybody could use in real time.”

Feighery’s solution to these problems would first manifest when he and his wife Annie, who works in the international health sector, participated in the World Bank’s Water Hackathon in October 2011. The two-day Montreal event brought together software developers to brainstorm ways to address water-related challenges facing developing countries. The couple worked with software engineer Clayton Grassick and others in developing a working prototype for a smart phone application that instructs users on how to perform, among other simple tests, a coliform bacteria test inspired by NASA’s research. The app could then be used to share the results with the public through the program’s mapping software. In August 2012 a fully functional Android-based application called mWater was released to the public.

Water contamination is a major problem in many countries around the world, and many die from waterborne diseases every day. Feighery says the application can be used to help families in rural areas and developing countries choose the appropriate tests for analyzing their local water sources for impurities ranging from E. coli to arsenic, fluoride, and nitrate. And to keep the software current, Feighery is continually investigating the latest methods. “In this respect we’re like a guide to testing,” Feighery says. “What we try to do is locate, identify, and test promising technologies for our users.”

Feighery and his wife Annie, along with fellow cofounder Clayton Grassick, are also working through their mWater Foundation to integrate the technology on a larger scale. For example, in 2013 the US Agency for International Development awarded the organization funding to work with the Tanzanian government. The goal is to integrate the mobile phone technology for use by public employees. Water utility workers, public health workers, and community health workers are currently using the app on a regular basis.

“All we’ve done is supply the initial test kits and the mobile phones,” Feighery says. “We’re learning what can be done by these different groups in terms of water quality monitoring, what are the obstacles, and what are the opportunities to make it better before it’s scaled up to a nationwide system.” That outcome figures into mWater’s loftier plans: to work with other organizations to map the quality of the entire world’s water supply.

In the meantime, mWater continues to improve on its technologies by, for example, facilitating group collaboration on projects and implementing more user-friendly features on its app. Feighery’s former NASA colleagues have also been inspired by mWater’s work. Mark Ott, a researcher in the Biomedical Research and Environmental Sciences Division at Johnson, is looking into the feasibility of transferring to mWater other water-monitoring technologies that have been developed at NASA.

“Being a microbiologist, you become aware of things like diarrheal disease, and so much of that is due to a lack of good-quality water, which is a major problem,” Ott says. “I love what John’s doing out there and am happy to help in any way that I can.”

Abstract
John Freighery was an environmental engineer at Johnson Space Center when a new, simplified version of the coliform bacteria test was developed for astronaut use on the International Space Station. Through his New York City-based mWater Foundation, Freighery is using the test to help rural communities monitor their water supplies for contamination. The organization has also developed a mobile phone app to make the information publicly available. 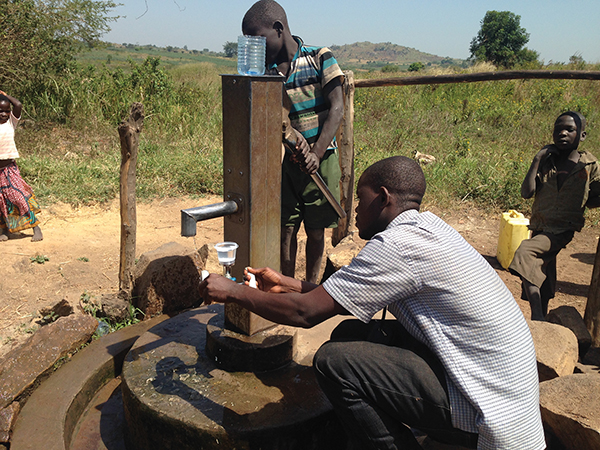 Maurice Kanzala collects a water sample from a shallow dug well for The Water Trust, one of mWater’s clients working to provide safe water in rural Uganda. The mWater app allows field workers to record and share water quality or other data on how the water source is functioning over time.

Canadian astronaut Robert Thirsk shows the coliform bacteria test kit that is used onboard the International Space Station. The test is designed to be lightweight and simple yet accurate.