Just 12 years after the Wright brothers became the first to take to the skies in a powered airplane, in 1915 Congress established the National Advisory Committee for Aeronautics to advance aviation. In 1958 the agency was dissolved in order to transfer aeronautics research to NASA, where space exploration would steal much of the limelight, beginning with the space race with the Soviet Union throughout the 1960s and ’70s, followed by the Space Shuttle Program’s ascendance in the 1980s.

Yet throughout all those years the agency has never wavered in its commitment to also advance air travel. NASA has worked hand-in-hand with industry to better commercial flight safety and efficiency, from advancing aircraft body components that increase fuel efficiency to developing software that helps air traffic controllers better monitor and direct airspace.

In the mid-2000s, as the nation grappled with spiking gas prices, NASA established the Subsonic Fixed Wing Project, aimed at helping the private sector advance fuel efficiency and noise-reduction technologies. To do so, the agency would partner with an aerospace company to finish its years-long work on a single, game-changing technology that would accomplish both goals. Collaborating with the agency would provide the extra lift needed to propel the device onto the commercial market.

Pratt & Whitney, a company within United Technologies Corporation, has long been a leading aircraft engine manufacturer. Founded by Frederick Rentschler in 1925, the East Hartford, Connecticut-based firm first came to prominence by developing the Wasp family of piston-powered engines, which were cooled by air rather than water. The result was a significant increase in efficiency and reliability during flight. In the 1950s Pratt & Whitney helped to usher in the age of the modern jet engine with its revolutionary J57 Turbojet, which was the first to achieve 10,000 pounds of thrust.

In keeping with its record of innovation, in the late 1990s the company started investing considerable time and money into finding a solution to a long-known inefficiency in turbofan engines.

Powering virtually all commercial aircraft today, turbofans generate thrust by drawing in air at the front with a fan. While most of the air goes around the engine, some passes through it, drawn in by a compressor comprising many blades attached to a shaft. The compressor pressurizes the air, greatly increasing its temperature. The hot air is then forced into a combustion chamber where it’s sprayed with fuel and ignited, resulting in hot, high-pressure gas that, as it expands, spins a turbine before blasting out of the nozzle at the rear of the engine, thrusting the aircraft forward. Because all the engine’s components are connected through a central shaft, a rotating turbine not only drives the low-pressure compressor but also spins the fan, providing additional thrust.

Now for what Pratt & Whitney chief engineer Michael Winter calls “the paradox” of modern turbofan engine design: fans are more efficient the slower they spin, whereas turbines become more efficient as they spin faster. “And the problem was that the two components have always been attached to the same shaft, so they have to spin at the same speed,” Winter says. “We wanted to introduce a gearbox that would allow the fan and turbine to spin at their optimum speeds, the effect being greater fuel efficiency and noise reduction.”

NASA and Pratt & Whitney had worked together on numerous projects throughout the years, including the development of fuel-efficient, low-pressure-ratio fans through the agency’s Advanced Subsonic Technology program in the 1990s. (NASA was the first to develop such fans under its Quiet, Clean, Short-Haul Experimental Engine program in the 1970s.)

The gearbox presented yet another opportunity for collaboration. In 2005 the two entered into a Space Act Agreement, which allowed the company access to the agency’s aeronautical experts as well as to NASA facilities, including the use of Glenn Research Center’s 9-by-15-foot Low-Speed Wind Tunnel, ice tunnels, and combustion facilities. In 2010 another NASA program, the Environmentally Responsible Aviation (ERA) Project, which also has goals of improving fuel efficiency through noise and emissions reduction, provided additional funding and engine testing.

After several years spent refining and testing the gearbox’s lubrication system, alignment, and overall efficiency to withstand more than 30,000 horsepower, in 2010 the full engine was ready for testing. Transport Canada certified the engine in February 2013, and Pratt & Whitney brought to market the PurePower Geared Turbofan (GTF) family of engines, designed for use in regional and single-aisle aircraft, and to date has more than 5,500 PurePower engine orders and commitments, including options, from more than 50 global customers.

Over the 60 years that jet engines have been used on commercial flights, fuel-burn efficiency has improved at 1 to 1.5 percent every year, says Pratt & Whitney’s Winter. “The GTF engine, in one fell swoop, improves efficiency by over 15 percent.” The drastic increase is made possible by the engine’s turbine and fan spinning at more optimal speeds, and by increasing the bypass ratio. In other words, incoming air is being routed around rather than through the engine, which adds thrust to the aircraft without burning extra fuel.

The reduction in fuel consumption per aircraft each year, Winter notes, translates to 3,000 fewer tons of carbon dioxide (CO2) released into the atmosphere, “comparable to the amount of CO2 displaced by 900,000 trees in the same amount of time.” Nitrogen oxide, a major greenhouse gas and air pollutant, is also reduced to 50 percent below the most rigorous standard set by the United Nations’ International Civil Aviation Organization.

Decreased fuel consumption benefits not only the environment but also commercial airlines’ pocketbooks. “Fuel savings with this technology comes to about $1.5 million per aircraft every year,” Winter says. “It’s a key reason for why we’ve already sold over 5,500 GTF engines to major and regional airline companies all over the world.”

Another main benefit is noise reduction. The annoying whine and piercing roar from current engines during takeoff have been reduced by slowing the velocity of the exhaust gases exiting the engine and reducing the fan rotation speed. Fan blades typically run at supersonic tip speeds, creating loud tones. The company has slowed the fan blades in its GTF to where the noise footprint has been reduced by up to 75 percent. Not only will the decreased noise pollution benefit communities situated near airports and flight routes; air travel could become more flexible and efficient. Airports will be able to consider longer operational hours, and flight routes designed for noise abatement around intercity airports can be replaced with more direct routes.

In the coming years, other GTF engine models will offer even greater fuel-burn efficiency and noise reduction, thanks to the ongoing ERA project collaboration between the company and NASA. A third partner, the Federal Aviation Administration, is also providing funding and guidance through its Continuous Lower Energy, Emissions, and Noise program. “We’re working together to improve all elements of the engine, from the fan and compressor to the combustor and turbine, and even some of the external flow around the nacelle,” Winter says, referring to the housing that holds the engine’s components.

Fay Collier, project manager for the ERA program, believes the joint effort has been—and will continue to be—a success. “I’ve been working with the company for 10 years, and it’s been a very reliable and productive partnership,” he says. “I’m looking forward to helping the company push the envelope in the aviation sector even further.”

Winter says the agency’s role in advancing commercial air transport cannot be underestimated. “The first A in NASA stands for aeronautics, and the agency brings world-class researchers and facilities to the table. It’s a tremendous resource for the industry and the nation.” 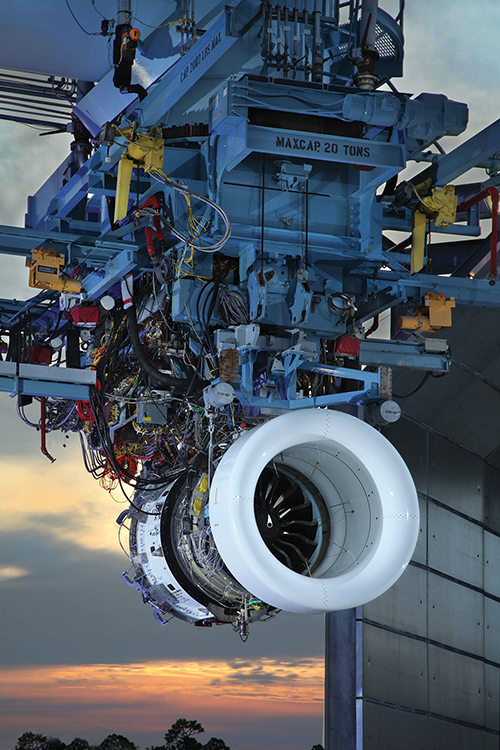