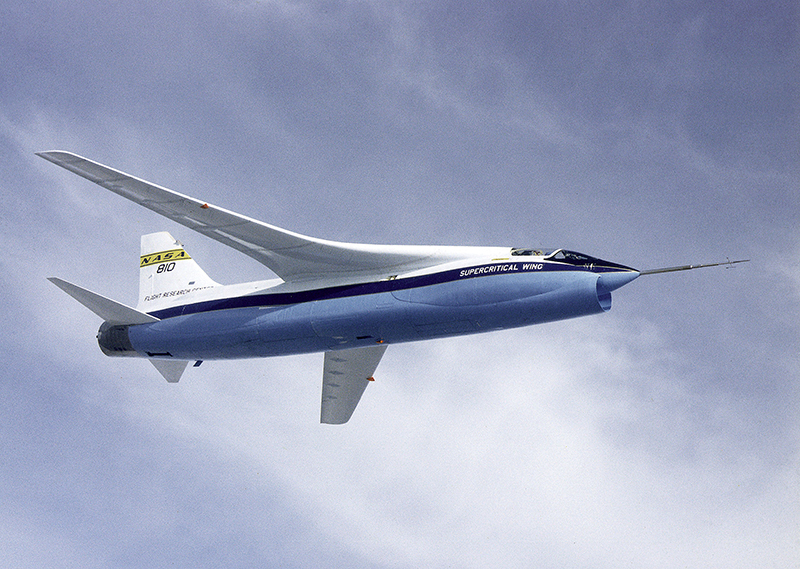 By the time he was visiting what is now known as Armstrong Flight Research Center to witness the first tests of his latest creation, Richard T. Whitcomb was already something of a star in the aviation world. Sixteen years earlier, this Langley Research Center aeronautics engineer had received the 1954 National Aeronautic Association’s Collier Trophy, considered the most prestigious honor in aviation, for doing more than any other single person to overcome the aviation challenge of the day—the so-called sound barrier. He’d been 34 at the time.

However, he was still working to improve flight efficiency at speeds approaching that barrier, now with a seemingly counterintuitive wing design, almost the inverse of what were then conventional wings. He called it the “supercritical” airfoil.

Later dubbed “the man who could see air” by the Smithsonian’s Air and Space Magazine, Whitcomb took an unconventional approach to aerodynamics, eschewing calculations in preference of visualization and intuition.

“Most people have to see through testing how air moves on a model,” Roy Harris, former aeronautics director at Langley, told the Washington Post in Whitcomb’s 2009 obituary. “But he had this uncanny ability to accurately sense how air molecules reacted over a surface before he even built the models.”

Indeed, he hadn’t been calculating or even observing wind tunnel tests when he had the insight that earned him the Collier Trophy. Now known as the “area rule,” this is the idea that a fuselage that tapers where the wings are attached can pass the speed of sound more easily than the traditional bullet shape. By his own accounts, he’d been sitting at his desk, chain smoking and imagining wind as pipelines sweeping over the surface of his model when the idea hit him.

In the early 1960s, after several years of work on designing a Mach 2-rated jet—that is, one that could fly at double the speed of sound—he became frustrated and returned to the more familiar field of transonics, speeds at or around the speed of sound. His supervisor suggested he research wing characteristics for an aircraft design being studied by the Ling-Temco-Vought Company.

“Though he had a conservative, shy personality, he was a radical in the laboratory,” NASA historian James Hansen wrote of Whitcomb in his history of Langley. “In some respects, management did not know exactly how to deal with him. The best idea any of his supervisors came up with was to leave him alone except to help him through those administrative duties distracting him from what he really wanted to be doing.”

Whitcomb was well aware of the problem the wings needed to overcome to ease flight approaching the speed of sound.

“As an object moves through air, it collides with the air molecules, creating a disturbance that propagates away from the object by means of weak pressure waves—essentially sound waves,” explains Robert Gregg, chief aerodynamicist for Boeing Commercial Airplanes, headquartered in Renton, Washington. “As the object moves faster, approaching the speed of sound, these disturbances that travel at the speed of sound cannot work their way forward and instead coalesce to form a shock wave.”

That shock wave tends to stand on the aircraft’s wing, creating drag, as the air has to flow over it. This is the sound barrier that aeronautical engineers had struggled to breach. The sound barrier had been broken in 1947, eliminating fears as to what might happen when that difficult threshold was crossed, and Whitcomb’s area rule had made it easier for larger, less powerful aircraft to reach supersonic speeds. However, flying near the speed of sound—around 660 mph at cruising altitudes, depending on air pressure and humidity—remained highly inefficient because of the drag caused by these standing shock waves.

Because a wing creates lift by accelerating the air moving over it and slowing the air passing under, the air on top of the wing reaches the speed of sound before the aircraft itself does, Gregg explains.

Whitcomb’s first insight into a possible supercritical wing design came unexpectedly, when observing an airfoil meant for a vertical-takeoff jet. Air passages between the wing and its flaps appeared to delay the formation of the troublesome shock wave, but Whitcomb decided this slotted design ultimately wouldn’t work. With this curtailed shock wave in mind, he returned to the wind tunnel.

Again, instead of running calculations, he started with a conventional wing design and, relying on intuition, used auto body putty to add bulk to some areas while filing away others, testing and re-testing his models in Langley’s high-speed wind tunnel.

Obsessed with the aerodynamics of flight since his childhood, Whitcomb had made his parents’ basement a workshop for improving the performance of model airplanes throughout his teenage years, and he worked no less obsessively now. He never married, and during the years when he was working on what would become his supercritical wing, he often worked two shifts per day, sleeping on a cot at the high-speed wind tunnel facility, according to coworkers, who said aerodynamics dominated his mind at work and at home.

His nephew, David Whitcomb, told the New York Times that NASA accountants scolded his uncle more than once for letting his paychecks expire while he used them as bookmarks.

The initial design for a supercritical wing was produced in 1964, and Whitcomb and his colleagues spent the next five years working through different models and concepts.

What they ended up with almost looked upside-down compared with standard wings of the day, because it was nearly flat on top and rounded on the bottom. It was also thicker than the norm, especially on its blunt leading edge.

“The low upper-surface curvature weakens the shock wave and, in many cases, moves the location of the shock wave farther aft,” Gregg explains. To compensate for lift lost by flattening the top of the wing, the trailing edge curves downward, especially on the bottom side.

While wind-tunnel testing showed the wing worked more efficiently than standard models, NASA lacked an explanation as to why this was so, since Whitcomb hadn’t arrived at the design by any analytical method. The agency had to contract outside help, in this case mathematician Paul Garabedian and aerodynamicist Anthony Jameson, both from the Courant Institute at New York University, to work with Whitcomb to develop a computational method for designing the wings.

Flight testing at what was then called the NASA Flight Research Center, later renamed Dryden Flight Research Center and now known as Armstrong Flight Research Center, was carried out between 1971 and ’73. The first plane used was a Vought F-8 Crusader provided by the US Navy, outfitted with wings commissioned from Rockwell International’s North American Aircraft Division. The tests showed the supercritical wing increased the F-8’s efficiency near the speed of sound by as much as 15 percent.

Whitcomb’s supercritical wings were a success, and aircraft manufacturers and airlines were paying attention.

NASA presented its test data at a 1972 conference. As industry designers evaluated the data, most commercial companies decided that, rather than use the new wing design to achieve transonic cruising speeds, they would use it to save fuel while continuing to cruise at around Mach 0.8. The Boeing 787, for example, was originally planned to cruise at Mach 0.9, but the company decided to drop that to Mach .85 and take a 20 percent fuel savings over its other two dominant twin-engine models.

It had turned out that the wings were more efficient at subsonic speeds as well.

“NASA’s work on managing the sound barrier provided the fundamental understanding of transonic and supersonic aerodynamics, which allowed the development of the aircraft we fly around in today.”

The US Air Force joined NASA for a joint program to test the supercritical wing on the highly maneuverable F-111, with test flights continuing into 1975. Results showed the test wing created up to 30 percent more lift than the conventional wing. This data was made available to the aviation industry at a time when fuel prices were hitting the business hard.

Some of the first commercial firms to incorporate supercritical wing technology into their airliners in the US were Rockwell, Canadair, and Lear. Dassault did likewise in Europe. Today, supercritical wings are used in commercial, business and military aircraft all over the world.

Gregg says all Boeing commercial and military transports use the technology.

“The ability to have a thicker wing as a result of incorporating supercritical wings generally results in a lighter wing,” Gregg says. Because a thicker wing forms a sturdier attachment to the fuselage, it requires less reinforcing structure. The resulting weight savings allows more weight to be spent on either widening wing span or reducing wing sweep, and a wider span brings greater fuel efficiency.

“Because supercritical airfoils enable less-swept, wider wing spans, low-speed maximum lift and low-speed lift-to-drag ratio has improved,” Gregg says. “Improved maximum lift reduces the speed required to lift off or land, so takeoff and landing field lengths can be reduced. A better lift-to-drag ratio reduces the thrust required to fly at a given speed. These principles apply to any aircraft.”

In 1974, NASA calculated that air carriers worldwide could save a total of about half a billion dollars in fuel by incorporating the technology. That’s almost $2.4 billion in today’s dollars, but then, there were only around 4,500 airliners flying in the world at that time, according to the Canadian Department of Transport, while Boeing estimated the industry’s global fleet by the end of 2012 at more than 20,000.

“NASA’s work on managing the sound barrier provided the fundamental understanding of transonic and supersonic aerodynamics, which allowed the development of the aircraft we fly around in today,” Gregg says. He notes that 734 million passengers traveled on US carriers in 2012, and $1.6 trillion worth of freight were transported by air in 2008, adding, “Without the work led by NASA, this would not have been possible.”

And, he adds, whatever is saved in fuel is also saved in carbon dioxide and other greenhouse gas emissions.

Later, in the 1970s, Whitcomb was inspired by an article on birds to refine what he called “winglets”—the small, vertical wings that are now seen on the ends of nearly all airliner wings (Spinoff 2010). This innovation saves airlines another 4 to 6 percent in fuel, with comparable reductions in emissions, according to Aviation Partners Boeing.

“Dick Whitcomb’s three biggest innovations have been judged to be some 30 percent of the most significant innovations produced by NASA Langley through its entire history,” Langley chief scientist Dennis Bushnell said in a NASA press release upon Whitcomb’s death. “That’s from its founding in 1917 to the present. He is without a doubt the most distinguished alumnus of the Langley Research Center.”

Abstract
A Langley Research Center engineer_s work in the 1960s and _70s to develop a wing with better performance near the speed of sound resulted in a significant increase in subsonic efficiency. The design was shared with industry. Today, Renton, Washington-based Boeing Commercial Airplanes, as well as most other plane manufacturers, apply it to all their aircraft, saving the airline industry billions of dollars in fuel every year. 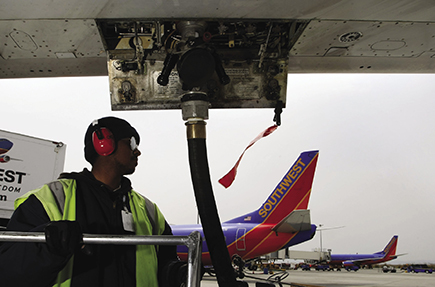 NASA-developed supercritical wings save the airline industry billions of dollars’ worth of fuel every year, which also means significant reductions to greenhouse gas emissions. 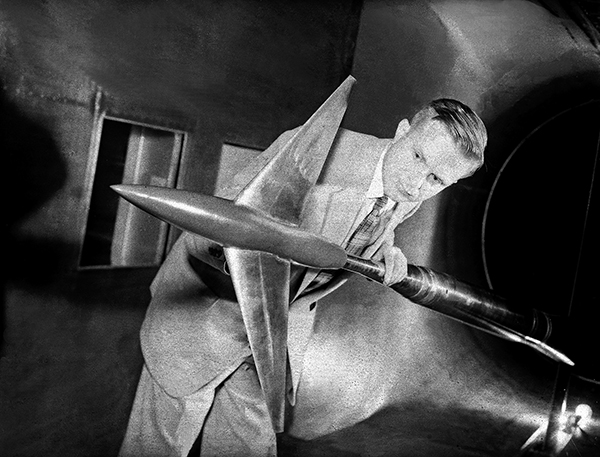 The supercritical wing was one of three major contributions Langley Research Center engineer Richard Whitcomb made to aeronautics. An eccentric who seemed most at home in the center’s wind tunnel facilities, where he was known to sometimes sleep between double shifts, Whitcomb tended to prefer intuition to calculation when working out designs.

The first aircraft used to test supercritical wing designs was a modified Vought F-8 Crusader provided by the US Navy.   The supercritical wing design is almost the inverse of what was the conventional design when it was invented. Around the speed of sound, the flatter top side minimized the effect of the standing shock wave that formed on the wing, while a downward-curving underside compensated with additional lift.